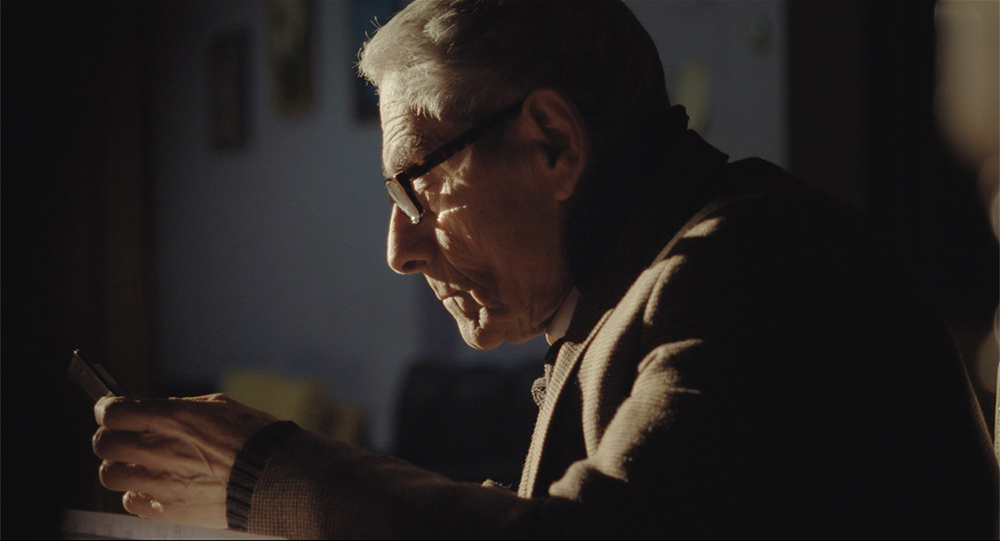 Shooting Scenarios is a column that takes a single scene and breaks it down cinematographically, looking at the shooting logistics, creative challenges, and camera gear deployed.

The Mole Agent is in a class by itself. For starters, documentaries about private detectives and their moles are exceedingly rare. What’s more, any film that mashes up vérité, film noir and Pink Panther tone is one of a kind.

The film, by Chilean director Maite Alberdi, follows 83-year-old widower Sergio Chamy after he’s been hired by a private detective to move into a retirement home near Santiago and act as a spy. His mission: Investigate whether the client’s mother is being mistreated or robbed.

During his stay, Sergio blends in and becomes a favorite of the elderly ladies, who treasure his kindness and attention. He discovers no abuse. Rather, what he observes is the loneliness of old age.

Sergio does uncover theft, but not from the staff. The culprit is Marta, a senile old lady who’s nonetheless quick with her fingers. The sequence where he proves that she’s the thief is worth singling out, as it involves all three looks of the film: observational footage, film noir, and surveillance shots from Sergio’s spy-craft eyeglasses. It also marks an emotional turning point, where the novice spy shifts allegiance from the detective to his new friends. His heart is no longer in the job.

Sergio has grown suspicious of Marta. In fact, in the preceding scene, she steals candy right out of his pocket. He starts a stakeout. He watches staff fold laundry, without incident. But a telephoto lens captures Marta across the courtyard taking a shirt from a laundry pile. She also confiscates a towel from the clothesline. Sergio dons his agency-issued spy eyeglasses and low-resolution shots follow, as he trails Marta and observes her shuffling into someone’s room. “Oh, these are mine,” she exclaims, grabbing three cushions off the bed. Sergio subsequently sneaks into Marta’s room, where he discovers various stolen items, including a necklace of the client’s mother.

When Sergio dictates his findings that night in a voice memo, the noir look takes over. Sitting in deep shadow, Sergio is cinematically lit, with hard light providing a crisp edge in this high-contrast set-up. We cut to a close-up of his boss’ face on Sergio’s phone, discussing the news. Private detective Rómulo Aitken calls Marta “a rat” who’s “earned the title of thief.” Sergio remains silent, but we know what he’s thinking, as he’d earlier confessed that “it’s hard to get angry” with this dementia-addled soul. In fact, the next scene finds Sergio gently teasing Marta in the courtyard when she complains that someone stole her school bag.

This is the fifth collaboration between Maite Alberdi and cinematographer Pablo Valdés. “My career does not exist without him,” she says. Most of their films have been long-haul projects, where they stick with their subjects for months or years. The Mole Agent involved three months of filming, Monday to Friday, noon–8 pm. “I was seven months pregnant,” says Alberdi, “and it was the most tiring shoot I’ve ever done.” It added up to 300 hours of footage, not including material from Sergio’s spy glasses.

The crew’s footprint was small: director, DP, sound person and assistant director. Since they wanted to avoid tipping off the retirement home to the spy in their midst, they resorted to subterfuge, saying they wanted to make a film about the elderly and follow several residents there, including any newcomer. (Sergio arrived two weeks into the shoot.) Since Alberdi’s prior work had addressed old age (including Tea Time, The Hairdressers and I’m Not from Here), her request seemed legitimate.

Alberdi initially wanted to make a nonfiction film noir about a private investigator. She spent some months working for Rómulo to learn the trade, but after seeing his work with moles, she shifted her focus to the latter. She even imagined doing a series where each episode would follow a different mole. But realizing the impossibility of secretly embedding in a place while also lighting for a noir look, she abandoned that idea. Instead, she decided to focus on a single mole: Sergio, hired to replace the agency’s usual geriatric spy, who’d broken his hip.

The noir look could be carried out only when they had privacy from prying eyes and full control of the space. That meant it was limited to Rómulo’s detective office and Sergio’s late-night reports, shot in an infrequently used living room when only a night nurse was on duty.

During prep, they studied classic film noir references. “Maite showed me Laura by Otto Preminger and The Lady from Shanghai by Orson Welles,” says Valdés. “We also looked at The French Connection by William Friedkin, considering that the locations were going to be real.”

When Rómulo is interviewing applicants for the spy position at the film’s start, the tropes of film noir are introduced: Venetian blinds and sharp shadows, hard light, Pink Panther-esque music, accoutrements of the spy trade littered across the office. At a certain stage in production, they even turned the client into a femme fatale. “But in the end, the film wasn’t about the case,” says Alberdi, “it was about Sergio.” So this Chilean femme fatale was left on the cutting-room floor.

Valdés shot in 2K with a PMW-F5 Sony CineAlta. The camera was coupled with an Angenieux Optimo 30–80mm zoom for all the observational footage in the retirement home, while a Zeiss 18mm established the noir look in the detective’s office and a Zeiss 135mm served as their telephoto lens. When in the retirement home surrounded by bored elders, the director used a smartphone app to check framing. “If we’d had a monitor on the camera,” Alberdi points out, “everybody there would be looking at what we’re shooting.”

Their approach was to set up the camera and wait. For that reason, the Sony was always locked down, except on two occasions when Valdés needed to follow Sergio with a handheld camera: when he’s inspecting people’s bathrooms for cleanliness and when searching Marta’s room.

The lighting set-up in Rómulo’s office established the noir look. “The main lighting unit was a window facing east, through which natural light entered, which we had to control depending on whether the scene took place during the day or at night,” says Valdés. Rómulo’s office already had Venetian blinds on interior and exterior windows, but production brought in some portable blinds that Valdés could place before a hard light to better control the projection of shadows. Nothing so elaborate could be done in the retirement home, of course; here Valdés had to create the high-contrast chiaroscuro look with a single Fresnel.

To catch Marta, they set up a sting. “Sergio wanted to prove to Rómulo that it wasn’t the nurses who were stealing; it was Marta,” says Alberdi. “So I gave him one of my bracelets, and we left it out on a table.” Sure enough, Marta took the bait, and both Valdés and Sergio captured the moment with their respective cameras. “It was perfect! But the producer told me, ‘It’s so perfect that you cannot use it, because it seems fake.’ ”

Sergio kept at it. The team discovered that Marta had a schedule like clockwork. “She always steals at the same time: after lunch, when people are taking a nap or watching television, and the nurses aren’t in the corridors. She’d go to the empty rooms then,” Alberdi says.

For his part, the cinematographer wasn’t afraid of getting caught when snooping in Marta’s room. “We filmed these scenes at certain times, when we knew exactly what the staff and the other inhabitants of the home were up to.”

The team eventually learned that everyone in the retirement home already knew that Marta was the resident kleptomaniac. Staff would sweep her room every few days to collect the stolen goods and return them to their rightful owners.

Components of the finished sequence were filmed over a period of five days. Alberdi knew that Sergio’s spy-cam footage needed to be included, time code and all. “It was part of the character, and the film is a portrait of him,” she says. “So I was frightened that he’d shoot it badly with his glasses,” but he aced the mission.

When shooting Sergio’s late-night memo to Rómulo, Valdés first lit the space, then the director had Sergio read his report twice, so they could get two camera angles. “I knew what he was going to say, because he wrote it down in his notebook. But I didn’t know what was going to happen with Rómulo.” Their exchange, Alberdi says, “is an important scene, showing the change of focus for Sergio—like, she’s my friend, she’s not a rat, and my heart is here and not with my job, as it was at the beginning.” She continues, “It’s the turning point in the film. Sergio wouldn’t say yes to Rómulo. They were now on different frequencies.”

That’s evident in the courtyard scene that follows. “He’s playing with her in that dialog about the school bag and school notebooks,” says Alberdi. “That’s his life at the moment. It’s not about the stealing. He’s more concerned about going with Marta’s mood.”

The Mole Agent is available on iTunes and airs on POV on January 25, 2021.