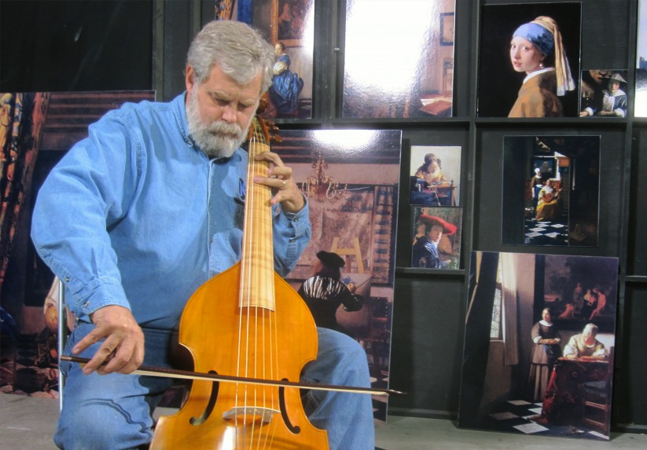 Of all the challenges in life that one might choose to pursue, trying to reproduce a painting by one of the most admired Dutch painters of the 17th century, Johannes Vermeer, is not one that comes to mind. Nevertheless, having no experience as a painter, San Antonio-based computer maven Tim Jenison decided to set that task for himself. That saga, which took over five years, is the subject of Tim's Vermeer, produced by Penn Jillette and directed by his partner in magic and performance, Teller.

Penn and Teller had produced a highly successful show for Showtime, Penn & Teller: Bullshit!, on which they debated and debunked political topics and pseudo-scientific ideas along with popular fads and misconceptions. The show ran from 2003 to 2010. During this time, the duo's friend Jenison, inspired by David Hockney's book Secret Knowledge, which investigated the camera obscura technique practiced by Vermeer and his contemporaries, set out to prove that one need not have artistic talent to achieve what Vermeer did. All Jenison had to do was to reproduce whatever combination of lenses, mirrors and other 17th-century tools the artist might have.

Jenison was clearly no stranger to the technical qualities of creating images. His highly successful company, NewTek, developed Lightwave 3D, a 3D modeling rendering and animation system, which has been used extensively in television and film. When he told Penn and Teller about the details of the project, Penn said, "We need to get a film crew for this." But they were not successful in raising the money. So, with Teller as director, they proceeded to produce it themselves.

Wading into the long-standing debate about technology and art, Jenison traveled to the Netherlands, learned Dutch, and made contact with one of the leading Vermeer experts, Philip Steadman. His book Vermeer's Camera argues that Vermeer had to have used the camera obscura—and offers a detailed examination of the geometry of paintings themselves as the evidence. That Vermeer, who died in 1675, had access to camera obscura equipment is generally accepted; whether he used it or not is essentially unprovable.

Vermeer made only 36 paintings that have survived—small gems depicting quiet interior scenes of everyday life. The paintings are famous for their remarkable detail, their composition, their jewel-like color, and the beautiful soft light that bathes the rooms and their occupants.

In the film, Jenison decides that in order to test the notion of a camera obscura, he will have to build an exact replica of the room that appears in Vermeer's The Music Lesson, and then create an optical system to paint it himself, while peering at a mirror reflection of the original. He enlists the ongoing help of both Steadman and Hockney.

The Music Lesson is a classic Dutch genre interior scene with a young woman at a harpsichord and her teacher standing nearby. Above the instrument is a mirror in which we see a partial reflection of her and the space behind her. The entire scene is suffused with Vermeer's lovely light, which appears to come from the windows depicted on the left side of the room.

"Tim needed a Vermeer scene whose elements he could replicate accurately," Teller explains via e-mail, on Jenison's choice of The Music Lesson. "The dimensions of the studio room were established several years ago by Philip Steadman, author of Vermeer's Camera. Each of the furnishings of the room—the lion's head chair, the harpsichord, the carpet, the mirror, the viola da gamba, the costumes—were obtainable by purchase or construction."

Employing computerized rendering tools, Jenison calculated the exact dimensions of every object seen in the original painting: stained glass windows, a harpsichord, a chair, a rug, and the costumes of the two figures. Constructing all of this by hand and positioning each just right in the room took him close to seven months. Throughout this venture, Jillette banters with him and narrates the story on camera as it develops, with no lack of humor and the occasional touch of disbelief that it will ever work. As it happens, Jenison's project and the film could not have been made without the advanced technical tools of recent years—no doubt a contributor to the challenge for him.

"This is a film that couldn't have been made even 10 years ago," says Teller. "Thanks to advances in digital movie-making, we were able to run multiple cameras throughout the painting process, which made sure we had eyes on every brushstroke. Additionally, Tim used Lightwave to model the details of the room, such as the size and pattern of the window. Also, the animations that illustrate the various optical points were created by Tim's team, using Tim's products. Finally, Tim's years of studying what makes the nuances of light in an image seem 'photographic' were at the heart of his quest. Tim was certain Vermeer wasn't just making these scenes up; he was recording them with an optical tool."

As Jenison pursues his obsession, we see him grinding his own lenses, mixing period-appropriate oil paints and sitting down for months on end peering into a small mirror to work on the painting—for a total of 1,875 days. Re-creating the extraordinary detail of things like the intricate painted patterns on the harpsichord and the complex color scheme of the Persian rug in the room, Jenison soldiers on, and we cannot help rooting for him. If he had not completed the project, there would be no film.

"We also discovered early on that Tim had trouble talking directly to a camera lens, so he equipped his Red like a teleprompter with a Skype feed of our producer Farley Ziegler in Los Angeles, whom Tim debriefed at the end of every work day," Teller explains. "That way, Tim could be confiding his thoughts and feelings to a beautiful friend, and I think that was well-reflected in his attitude towards the camera and viewer."

Finding themselves with enough footage for many films, Penn and Teller had to figure out how to structure all this material into one feature doc. "We went through many, many clever ideas for presentation," Teller related at a press conference following the film's premiere at the Toronto International Film Festival. "At one point, we were going to present it like a Penn & Teller Bullshit episode with clever little wraparounds. We thought about presenting it like a video game with a graph that showed how much life Tim had left, with it slowly depleting. But the more we looked at the footage, the more it became apparent that this was Tim's story and Tim was the driving force behind it."

Finally the great day comes and the replica Vermeer is complete. Jenison takes off for London to share his amazing painting with Steadman and Hockney. Both are impressed and positive about what he has done, congratulating Jenison on his contribution to the issue of technology and the arts. Before the 19th century, many people felt using such tools diminished the "originality" of the artists' work, that it was a kind of "cheating." Of course, artists today use all sorts of technologies in their work; not only is it entirely acceptable, but artists are admired for working with these new tools.

Tim's Vermeer had a popular festival circuit run this past fall. Following a weeklong qualifying run in December, the film opens nationwide January 31 through Sony Pictures Classics. "I've been stunned at how many people are in love with the film," Teller exclaims. "It seems as though many people in all the arts feel that Tim's Vermeer is telling their story, of the ingenious, funny, arduous and surprising adventure one must undergo to get from an idea to a completed work of art."

END_OF_DOCUMENT_TOKEN_TO_BE_REPLACED

Drawing the Line: Jedd and Todd Wider Examine Civil Liberties of the Mentally Ill in 'God Knows Where I Am'