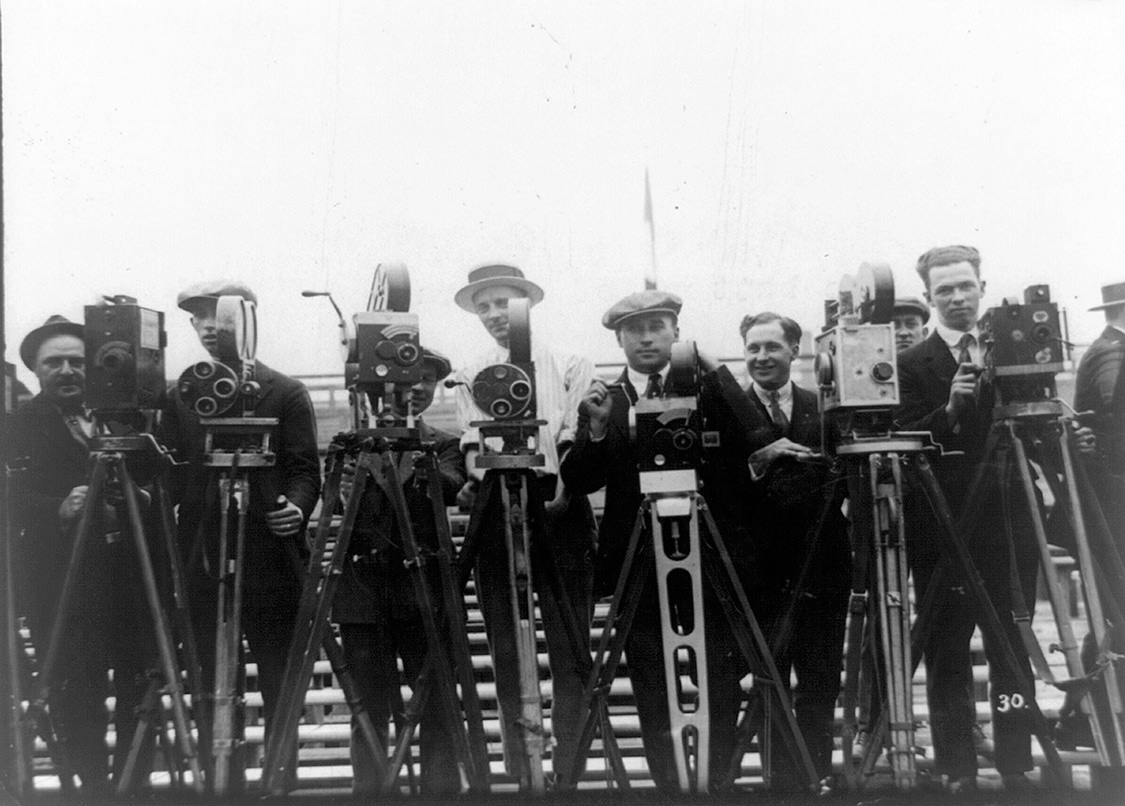 When was the last time you picked up a book—a historical survey on documentary film, to be more exact—and discovered a page-turner? My guess is, you never have—and neither had I until I read Screening Reality: How Documentary Filmmakers Reimagined America. Just released by Bloomsbury, a publishing house known as much for its best sellers as for its respectable catalogue of academic books in the humanities, social sciences and visual arts, Screening Reality is being touted as the first, comprehensive history of American documentary film. If this is indeed the case, there is no one better equipped to take on this task than the author, Jon Wilkman. He is a prolific, award-winning writer, producer and director of documentary films that have aired on PBS as well as on network and cable outlets including ABC, NBC, CBS, A&E, Turner Classic Movies, The History Channel and HBO. In addition he managed to co-author two photography books on Los Angeles with his late wife, Nancy, and a solo excursion, Floodpath: The Deadliest Man-Made Disaster of 20th Century America and the Making of Modern Los Angeles, also published by Bloomsbury in 2016. Squeezed somehow in-between all this, Wilkman manages to inspire the next generation of reality-based believers through his lectures and teaching at Fordham University, the USC School of Cinematic Arts and UCLA Extension.

Although Wilkman was also a board president of the International Documentary Association in the 1990s, I have not met him, and I approached the reading of this book as a challenge to my staying power, as it is an impressive 520 pages and I confess to being afflicted with the contemporary malaise of distractibility compounded by “Twitteritis.” Wilkman immediately captured my attention from the very first chapter by weaving together his encyclopedic knowledge of the technological evolution of motion pictures with delightfully rich detail and informative asides that elaborate on what we think we already know about the history of documentary cinema. In following a logical chronology, he begins, as might be expected, with eccentric photographer Eadweard Muybridge, whose experiments with moving-image photography in the 1870s form the touchstone for all subsequent advances in filmmaking. Wilkman outlines the state of image-making technology in that time and provides the nuts-and-bolts backstory to Muybridge’s 1878 photographic study of a running horse by describing the supporting role played by transcontinental railroad mogul Leland J. Stanford, who was also a fancier of racehorses. Stanford wanted an answer to the oft-asked question, Were all four hooves of a running horse ever off the ground at the same time? It took six years of effort but finally in 1878 Muybridge captured Stanford’s trotter, Sallie Gardner, with all four of her hooves suspended in midair. I don’t remember reading the name of the horse in all the histories of photography that feature this classic image. This is the kind of tasty tidbit that repeatedly made me smile throughout the reading of the text.

War has had a profound influence as a subject for documentarians since the beginning of our recorded history. Wilkman demonstrates America’s bottomless appetite for revisiting the causes and experiencing the drama of war through photographers’ coverage on the ground from World War I to the Spanish Civil War in 1936-39 to Ken Burns’ epic panoramas on the American Civil War, World War II and the Vietnam War that were broadcast on PBS. Wilkman also discusses how war helped to drive the evolution of film technology like the development in World War II of the GSAP (gun sight aiming point), a 16mm camera system mounted on 30mm machine-gun turrets in fighter planes, providing audiences with a bullet’s view of strafing attacks and aerial dogfights. This struck me as a precursor to the thrill-seekers’ point of view seen in gaming technology today.

In our current age of confusion, driven by conspiracy theories and postmodernists positing the relativism of all knowledge, Wilkman, in the prologue, unequivocally states his position: “As a documentarian for more than 50 years, I still believe in facts and evidenced-based truth.” To cynics, this may seem quaint, but in the ensuing chapters Wilkman traces how time and again it is those practitioners and peddlers of truth who risk their lives when reporting from the battlefields of war, or risked their reputation when covering the fear-mongering of the right-wing Republican Senator from Wisconsin, Joseph McCarthy, about Communist infiltration in every aspect of the government and American life during the Red Scare of the early 1950s. I was not surprised to learn that corporate advertisers and TV network executives were fearful and hesitant regarding their support of respected newsman Edward R. Murrow and his producer-collaborator, Fred Friendly, on their CBS See It Now exposé of the perils and injustice of McCarthyism. I was surprised that polls showed the American public was divided 50/50 in their approval rating of McCarthy at the time, which in retrospect gives me hope knowing that at this writing, the public approval rating for Trumpism has consistently wavered at less than 50%. Wilkman communicates the stress Murrow experienced during his reporting in such a highly charged political moment with this observation: “Murrow, always tense and well into his daily three packs of unfiltered cigarettes, reached under the table, found a glass of scotch he kept there during broadcasts, took a sip, waited for an ‘on the air’ signal…and began.” Later in the same chapter Wilkman states, “Edward Murrow and Fred Friendly’s See It Now broadcasts didn’t directly cause the downfall of McCarthy, but they documented and hastened the process and raised the bar for television journalism.”

It was also during this profound time of serious TV truth-telling in the 1950s that seeds of the now ubiquitous reality TV invasion began to emerge in the form of the quiz show The $64,000 Question (1955-1958). After a few years, news spread that these shows, far from being spontaneous reality, were fixed frauds. But the public was already infected and like a virus, reality TV has proliferated, dominating television in the 21st century. In 1973, the PBS series An American Family, a moment-by-moment examination of the dissolution of the Loud family, shot in real time by vérité documentarians Alan and Susan Raymond, was broadcast and sent a seismic shock to America’s consciousness about the meaning of “family” that reverberates today. Even though the influence of this series has been scrutinized in previous texts, Wilkman provides little-known production details and follow-up of the effect the program had on the lives of both the filmmakers and the filmed subjects. Despite the undeniable value that the 300 hours of 16mm film footage and outtakes from An American Family had for historians, sociologists and future filmmakers, I was dismayed to learn that some really misguided bureaucrats at WNET destroyed much of that footage. The series, while currently unavailable, is intact, however, and PBS aired it in its entirety in 2011, prior to the HBO broadcast of Robert Pulcini and Shari Springer Berman’s feature narrative about the making of the series, Cinema Vérité.

Throughout American history, small screens, from TVs in living rooms in the 1950s to streaming video on cell phones today have been the dominant vehicles for disseminating documentary content to viewers. Wilkman provides a clear map of that evolution, while not ignoring the importance to American culture of theatrical, and long-form filmmaking on the big screen from Maya Deren, Joan Churchill, Barbara Kopple, Fred Wiseman, Michael Moore, Errol Morris, Laura Poitras, the Maysles brothers, Werner Herzog, Ava DuVernay, Clint Eastwood, Alex Gibney and Spike Lee, among many others. The author also provides a significant amount of information about the contributions to the art of documentary by African Americans from Booker T. Washington in 1918 to Eyes on the Prize producer Henry Hampton and Stanley Nelson, whose distinguished body of work led to his being honored in 2016 with both a Lifetime Achievement Emmy and an IDA Career Achievement Award. Indigenous filmmakers like Hopi documentarian Victor Masayesva are covered, as are the achievements of José Luis Ruiz, the director of the National Latino Communications Center during the 1980s. The fearless portrayals of the LGTBQ community from Marlon T. Riggs and Arthur Dong are yet another example of the growing acceptance of certain subjects unheard of in the not-so-distant past.

Wilkman gives the impression he was adding chapters to this book right up to press time. He does not shy away from the elephant in the room in any serious discussion of truth and reality in the media today. Foisted on us by reality TV, President Donald Trump, when fact-checked, tells, on average, 15 lies, falsehoods or misrepresentations a day, according to an ongoing tally conducted by The Washington Post. That we even know this is perhaps a triumph. Wilkman does not leave us with the bitter taste of Trump, however. In the last paragraph of the book, the author loops back to another US president, James Madison, who warned of the dangers to a stable government when universally agreed upon truth in information is no longer available. Wilkman then reminds us, “When the foundations of evidential inquiry are under attack, and virtual reality promises to change perceptions of what is accepted as real, nonfiction filmmakers and their audiences face a great opportunity and existential challenge.”

More than existential, that challenge is real. To erase any lingering doubt, we are left with Wilkman’s last words: “That’s the truth.”

END_OF_DOCUMENT_TOKEN_TO_BE_REPLACED

Creators vs. Consumers: Reclaiming the Conversation About Copyright