Brown Girls Doc Mafia: Working Towards a Future of Thriving 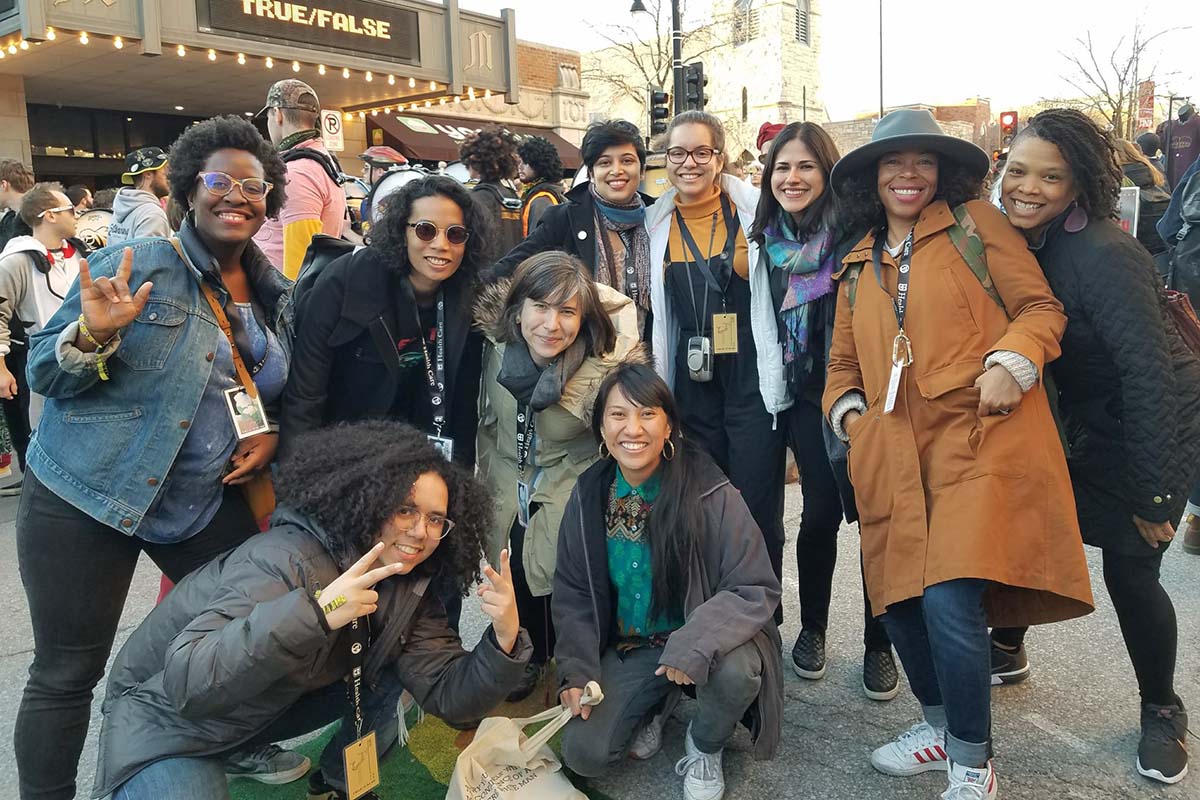 Brown Girls Doc Mafia (BGDM) started as a secret. It was built to be a safe place for BIPOC women and non-binary filmmakers and industry professionals working in the documentary field, where we could set down our masks, shed our armor, and take a breath in an industry that often felt hostile to communities of color. This was 2015, when the needs of these communities largely weren’t being met by industry initiatives due to a lack of intersectional approaches and a dearth of BIPOC leadership with decision-making or culture-building power at prominent documentary institutions. Over the next six years, BGDM and other BIPOC-led film organizations, collectives, and companies stepped up to meet the creative, professional, and holistic needs of these vital populations. We answered a collective call to action to reimagine a documentary field in which communities of color could not only survive, but could perhaps actually begin to thrive.

BGDM was formed as a response to the isolation, tokenism, and neglect that BIPOC women and non-binary filmmakers and industry professionals often face in their efforts to make progress in their careers. Our artist programs and nurturing community seek to help members thrive within a sense of belonging, purpose, safety and strength. Members have the opportunity to develop their careers and creative projects in a supportive environment where they exchange invaluable resources, hold critical conversations, find jobs, hire each other, get feedback and learn new skills. Community-building is at our core because we know these relationships are the seeds that will sow greater change in the documentary industry over the next 20 years, and ensure that this “golden age of documentary” is diverse, equitable, just, and inclusive. BGDM’s work is part of a movement of BIPOC change agents in the documentary field that we’re honored to walk alongside, including A-Doc, Firelight Media, Undocumented Filmmakers Collective, Black Public Media, Black Documentary Collective, NextDoc, Black Film & TV Collective, Hue You Know, and more.

Granted, the documentary film industry has been buzzing about diversity and representation for some time now, and it’s been splendid to see some concrete progress—especially with the prominence of BIPOC-directed films being featured at high-visibility film festivals and garnering huge distribution opportunities, and with the increase of people of color holding vision-building and decision-making roles at notable documentary institutions in the last two years. But as a whole, the documentary field hasn’t been a very safe place for our community. Its legacy of willful ignorance, lack of diligent research, and reliance on lingering biases have unfortunately placed current and future generations of BIPOC film professionals at a disadvantage professionally, psychologically and financially. As our field’s collective labor towards diversity and representation in the film industry begins to bear fruit, we must now push ourselves to center the concepts of justice and equity; a seat at the table is no longer enough.

The murder of George Floyd in the summer of 2020 spurred a critical moment of cultural reflection across the globe, and increased the film industry’s commitment to hiring BIPOC directors, production crews, and executives. In this rare moment, BGDM wanted to ensure that our members were visible and had access to these exciting opportunities. We put together a list of over 350 members that were immediately available for hire and blasted it out to over 1,000 industry gatekeepers and producers. It proved to be an invaluable tool for hiring diverse candidates, and later that fall, we launched the more comprehensive BGDM Member Directory, which has now grown to over 1,000 BIPOC women and non-binary makers and executives available to track, hire, fund and collaborate with.

Now, one year after the release of the Directory, and with hundreds of members having been hired from it, BGDM has unfortunately received a barrage of reports from members who are dealing with workplace trauma, sketchy contracts, payment evasion, improper credit allocation, gaslighting, microaggressions and other manipulative tactics—especially from those working in white-led companies, institutions and productions. Circling back to the concept of thriving (with justice and equity at its core), these reports cause us to question: Have these employers done the work internally to responsibly receive this diverse workforce? Has the industry created conditions in the workplace that would enable creatives and professionals of color to thrive?

As I consider the state of the documentary field and the future of BGDM, we remain compelled to bring attention to this topic of physical, psychological, and financial safety in the workplace for women and non-binary people of color. Beyond virtue-signaling or the creation of new surface-level programs, this kind of change requires deep, behind-the-scenes field-building work that directly engages industry employers in conversations about how longstanding practices and conditions in documentary film workplaces continue to denigrate employees of color.

BGDM is no stranger to this field-building work: When we launched our Film Festival Access and Visibility program three years ago and began helping hundreds of members attend film festivals throughout the US—many of them taking place in small, predominantly white towns— members reported such a large number of racist incidents that it became imperative for us to work directly with festival management to improve conditions at the events in order to make them safer for our community. Though there’s still much work to do, we’re proud that these efforts over the last three years have contributed to a marked shift in the level of attention and care our field has given to marginalized communities participating in these critical events overall.

A new call to action rings in our ears, and it's one that the whole industry needs to respond to, especially in the context of the IATSE and assistant strike threats, and because the pandemic has changed the way we all think about the quality of our work lives. We need to look each other in the eye and ask: How can we truly work toward justice and equity for communities of color in a way that rewrites the racist workplace conditions of our industry? How do we get to a place where BIPOC makers and professionals can actually thrive at work?

Thriving is defined as when a person is able to meet their potential; be healthy, joyful, curious, and strong. Thriving is a human right. If we as an industry don’t heed this call for deep systemic and personal change, we’ll squander all of the diversity and representation gains we’re so proud of. Instead, we’ll continue to tell communities of color that their humanity is less important than the ego, comfort, and wealth of the few, and we risk losing this diverse workforce and their invaluable contributions to other fields.

If the documentary film space can heed this call for self-interrogation as quickly as we pivoted toward checking the diversity box, perhaps the whole industry can thrive together.

Iyabo Boyd is a screenwriter, director, and producer working in fiction and documentary film. She is the founder of Brown Girls Doc Mafia, a collective for women and nonbinary filmmakers of color working in documentary, which has 5,500 members globally.

END_OF_DOCUMENT_TOKEN_TO_BE_REPLACED

We Been Here: The Black Documentary Collective