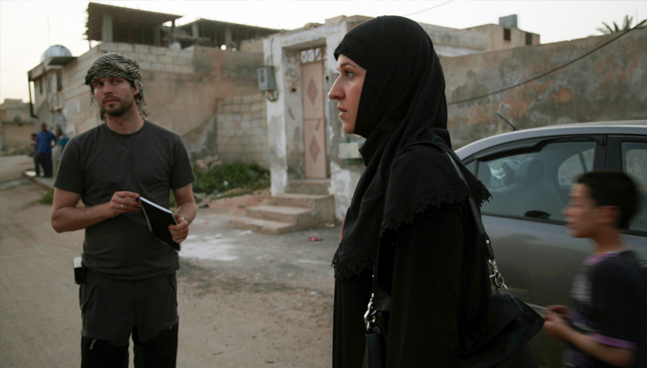 While shooting her documentary Somewhere Between, filmmaker Linda Goldstein Knowlton needed access to a remote area of China on a tourist visa with a camera crew. And she got it, thanks to her fixer.

On a rooftop in Brazil, a team of filmmakers were trapped; armed drug users had barricaded the only exit. The project's producer Marilyn Ness and director Ross Kauffman knew there was exactly one person to blame: the fixer.

Film shoots abroad require a fixer—a local guide whose job duties vary according to the team's needs. Ness said the fixer is "hugely important point in any shooting situation in a foreign country."

Kauffman explains, "The fixer is your driver and translator, interpreter or producer on the ground. Fixers are pretty much the most important aspect of keeping safe and staying alive, quite frankly. They'll say, ‘There's a sniper down that alley. You might not want to go there.'"

Finding a good fixer is a great thing. But hiring a bad one can result in lost equipment, footage—or human lives.

Goldstein Knowlton recommends building a network of contacts before departing. "Before you go, get to know as many people on the ground as you can," she advises. "Talk to people who have worked there. Get introductions to people. The more friendly faces you can know ahead of time, the better."

For Ness, a project depends on such research. "I wouldn't go in with no affiliation or groundwork done," she says.

The solutions that fixers offer can come at a great cost, especially in areas of conflict. "It's a ton of money per day to have armored cars driving you," says Ness. "So I think the scope of the conflict is a thing to really assess when you're figuring out a project. Find a local on the ground who can really guide you, and who knows what it means to get around and what it means to be secure in these places."

A good fixer will also know what not to do. "I depend on the crew and the fixers to tell me my boundaries and my limits," Kauffman says. "To know ahead of time when not to shoot. We were in Aleppo, and we encountered an Al Qaeda affiliate wing of the rebels. When they say put the camera down, you put that camera down. You have to be really aware, smart, respectful and thoughtful about what they're saying, and not push it. They are watching my back. But I'm also watching their backs as much as possible. There has to be a lot of trust."

Sometimes, fixers come in the form of partnerships with international Non-Governmental Organizations (NGOs).

Ness explains the model used for E-Team, a documentary that follows human rights workers into conflict zones like Syria and Libya. "We followed human rights investigators wherever they went. While they were incredibly prepared and often knew where they were starting, they were getting a lot of intelligence out on the ground as they went." The production team behind E-Team did not work with a fixer per se, but they relied on the safety protocols of the NGO they followed.

By embedding themselves with the organization Human Rights Watch, Ness explains, "We were going in with a fair degree of trust. Their folks are heavily trained on security, both when it's safe to go into a region and when it's not. There were scenarios that had to be evaluated for risk-benefit before Human Rights Watch would allow their investigators to go in. So given that, we were slightly less uptight when sending in our folks, knowing that they were going to be cared for with the Human Rights Watch protocols in line."

Operating on local terms might include gifts and bribes to ensure safe passage. "There are unconventional ways of getting yourself in and out of a situation safely," Ness admits. "Bribes are a key component to any conflict area," Kauffman concurs.

In addition to carrying extra cash, Goldstein Knowlton also takes small gifts. "We always knew to have gifts with us," she explains. "If you're returning to a place, you might need to thank someone, or pre-emptively thank someone. We also carried cash; you don't know when you're going to need to bribe somebody to get out of somewhere. You want to know that you can get out of there without thinking about it."

When making The World According to Sesame Street, Goldstein Knowlton traveled to Bangladesh on a journalist visa, where a government "minder" greeted her. "We did not expect a minder," she admits. "We weren't there to do anything untoward; it was a documentary about making Sesame Street in Bangladesh. But we did have questions about the government, because it would air on a government-owned station. We wanted to have the freedom to explore."

Goldstein Knowlton wondered how she would gain an opportunity to question people on the street about the government while the government was watching. She needed to distract the minder. "As we chatted with our government minder, we found out that what he really wants to be is a cameraman, and that he's worked as an assistant cameraman before," she recalls. She seized the opportunity when her co-director, Linda Hawkins Costigan, sent the minder with a camera to shoot B-roll footage. "We put him to work doing what he really wanted to do," Goldstein Knowlton says. "He contributed to making a movie. And we got rid of him for a little while so we could ask the public some tough questions about the Bangladeshi government."

Production details—research, fixers, customs, minders: these are all details the filmmaker working abroad must consider. But, Kauffman says, the bigger picture is just as, or perhaps even more, important. "As dangerous as it might be for us on the ground when we go in and out of these places, the real danger is for the people who are stuck in these countries and who are constantly under fire and who can't get out. Yes, you need security protocol. We have fixers and the money to help us be safe-but it's important to realize the real danger is to the people on the ground and the people in these countries living through it."

Suzanne Curtis Campbell is a Los Angeles-based writer, currently working toward her MFA in screenwriting at the UCLA School of Film, Theater and Television. She has worked with Ladylike Films on the award-winning documentaries Somewhere Between and Code Black, and on PBS' Makers.

END_OF_DOCUMENT_TOKEN_TO_BE_REPLACED

The DIY Decade: Docs Thrived in the Digital Revolution

How to Grow a Film Festival: Starting Regionally, Thinking Nationally

Locating the Sweet Spot: What Will TV Channels Pay for Your Doc?