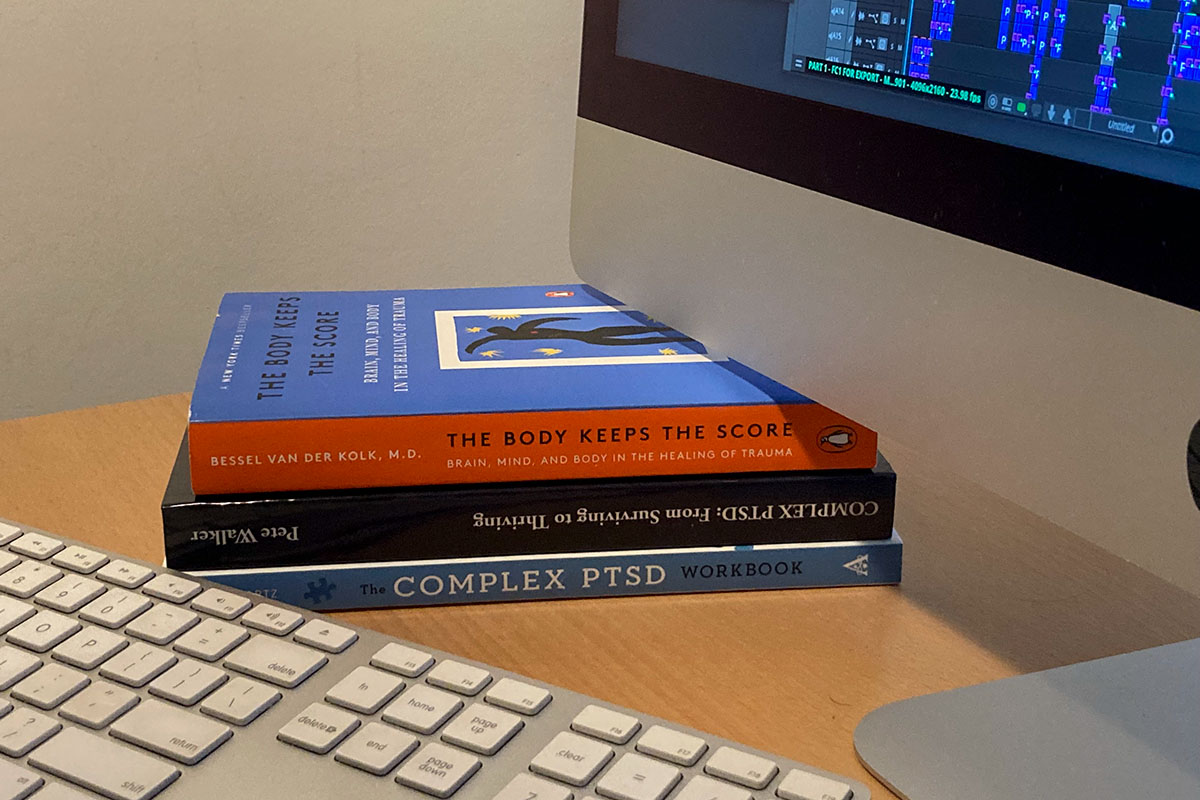 It was the first day on my new editing gig: a feature documentary about abuse, directed by Amy J. Berg. The AE had delivered the hard drive, the project set up to my requested specifications. I began opening bins and scrubbing through footage, and very shortly ran headlong into very disturbing material: a character roaming around streaked with blood; a series of photos showing the antagonist pretending to stab the protagonist over and over; audio of a woman being beaten and screaming. Caught off-guard, I felt a very old panic rising in my chest, that same terror I used to feel right before a phobic attack. Suddenly, I was 12 years old again, and shaking in a bathroom stall.

One of the benefits of working from home during the pandemic was that I was not alone in the house. I found my husband, and told him, “I’m not sure I can do this project.” He very calmly talked me through it, let me cry it out, and told me firmly that, contrary to what my anxiety was telling me, “Your personal experience and interest in the subject matter actually makes you the perfect person to do a great job cutting this.”

As a trauma survivor, I had avoided working on features and series that dealt with triggering subjects for my entire career up to this point. Editing locks you in a room for nine-plus months, mostly alone, with footage that can jump out of the screen and hit you in your tenderest places. And then, especially if you are dealing with some form of PTSD, you are locked in the room of your own mind with that footage playing over and over in a loop, getting bigger and scarier with each playback. Since editors tend to be sensitive people (and, I personally suspect based on anecdotal evidence, highly likely to be trauma survivors), this level of exposure to disturbing content—combined with the solitude of the profession and the often-grinding schedules—can lead to serious burnout, and possibly secondary trauma.

But when Amy first called me about editing her film, I was in the middle of a period of solidly processing my own traumas. As has been documented, when the pandemic hit, trauma survivors actually felt calmer, and this was certainly true for me: the constant stresses and chaos of daily life evaporated instantly, and my well-honed crisis management skills could focus on what was important. Somehow, the stoppage of life gave me enough space to begin to heal the scars of my past. By the time I got on the phone with Amy in late October, I finally felt able to consider taking on an emotionally difficult project.

"Editing locks you in a room for nine-plus months, mostly alone, with footage that can jump out of the screen and hit you in your tenderest places."

One month later, I was skirting the edge of a panicked meltdown. That first day, my husband helped me through it. I leaned on my therapist and friends, as well as the fantastic, supportive team Amy had put together, and tried to power through by focusing on vérité footage and big-picture structuring. But newly triggering archival materials kept coming in, and the prospect of a mountain of re-traumatizing footage terrified me. As I put it to my loved ones, I was “afraid that I might break.”

I finally spoke up during a team meeting, expressing my concerns that I might not be the right person for the job because I was really not sure I could handle it all. Amidst various expressions of support from the team, our amazing associate producer chimed in to say that she had a friend who had worked on The Vow (the 2020 HBO docu series about the NXIVM cult), and that they had brought in a consultant to speak specifically with the team about handling traumatizing footage in post-production. She offered to get more information, and shortly thereafter the production scheduled a session with Bruce Shapiro, executive director of Columbia University’s Dart Center for Journalism and Trauma.

For those of us in the documentary trenches, the Dart Center is almost a Shangri-La. Many of us (certainly in post-production) probably haven’t heard of it—I hadn’t until this point—yet it holds the key to better mental health in our work practice. As I was soon to learn, trauma science has solidly established that relentless exposure to graphic imagery in a professional context can potentially cause PTSD and other psychological injury no different from that caused by directly witnessing frontline trauma. Through interdisciplinary research and collaboration, the Dart Center provides evidence-based resources to help journalists (and, by extension, documentarians) navigate the challenges of reporting traumatic events.

I don’t know what I was expecting, but the session we had with Bruce blew me out of the water. In some ways, I was most impacted by how he set up the entire discussion at the outset: rather than diving into a discussion of trauma, he instead began with resilience, saying he wanted to emphasize human adaptability. As simple as it seems, I cannot overstate how powerful this reframing was. “Resilience to trauma is the norm!” he said, and with that, my entire worldview was completely changed.

I’m not a doctor, but I can say that my personal experience of long-term trauma, and the resulting C-PTSD (complex PTSD), had shaped my brain into one that was constantly expecting to be re-traumatized. I was surviving, but I didn’t believe I was resilient—I was in a mental crash position, always waiting for the next blow, trying to protect my core but never actually freeing up and growing.

"Set boundaries around your devices or phones ... They pump neurological arousal into us, and constant arousal is a bad place to be!”

- Bruce Shapiro, Executive Director of the Dart Center for Journalism and Trauma

Bruce spoke fluidly about the psychology involved, and presented the brain science to back it up. As a neuroscience nerd, I already knew something about what stress does physically, but for some reason, I had never coherently put together the second half of the picture, which was neurological recovery time. Bruce explained that, if given down time, our brains can process upsetting events (or footage) so we can remain psychologically healthy. While I was silently seizing on the ramifications of this (maybe this stuff won’t break me…?), Bruce gave our team a set of very specific actions to help our brains recover, including (but not limited to):

And one of my favorite recommendations: “Set boundaries around your devices or phones,” Bruce said. “They pump neurological arousal into us, and constant arousal is a bad place to be!”

We moved on to talk about how to manage graphic content—much of it came down to self-awareness and grounding ourselves in the moment—and spent some time discussing the elements of self-care, which, Bruce noted, was not optional. In fact, he said these were “fundamental to our professional success and engagement.” Self-care strategies include:

Throughout the session, Bruce emphasized this last strategy a few times, because having professional collegial support is one of the proven buffers that helps build resilience. Towards the end, we discussed how having a clear sense of mission is another buffer against secondary trauma and burnout. I brought up something that my best friend had mentioned to me, which, although the context was unrelated, had really stuck with me as I had struggled to find ways to overcome my job-related fears. She had told me that the thing that enabled her to do difficult or boring work was to connect it to a higher value she held. In her case, that value was helping people, and as long as she could connect to that higher purpose, she could take the more tedious steps to get there. I found that this worked extraordinarily well for my situation too: I could put my trauma reactions in their proper place by reminding myself that this work could help potentially thousands, or even millions, of abuse victims.

Our session with Bruce ended positively; it had been an intense discussion, but a remarkably helpful and affirming one. And the truth is, it actually worked. I began implementing the specific self-care suggestions he had talked through with me, and I approached the graphic footage very carefully and slowly: ignoring it at first until the film’s structure was clearer, then dipping my toe in a bit at a time, deliberately pacing and grounding myself as needed. Remarkably, since that session, I have not once experienced even the remote beginnings of an anxiety attack, even as I have gone deeper into the “abuse archive” as the cut evolves.

The most remarkable thing about this whole journey is how it has affected my personal life. One of the reasons I decided to work on this film was that I figured it would help me process some of my personal trauma, but I hadn’t realized just how effective it would be. I am a much calmer person, much happier, and I believe my C-PTSD is almost completely resolved. Of course, many factors have gone into this, but understanding and nurturing my brain’s resilience has healed me. I have not been broken, and I won’t be.

Miranda Yousef, ACE, is an accomplished documentary editor and filmmaker whose work has screened at major outlets including Sundance, Tribeca, PBS and HBO. A member of the Academy of Motion Picture Arts and Sciences, Documentary Branch, she won the DGA Award for her graduate thesis film, and is currently in pre-production with Tremolo Productions on her feature directorial debut.