Kirsten Johnson Reflects on the Three Mirrors of Cinema 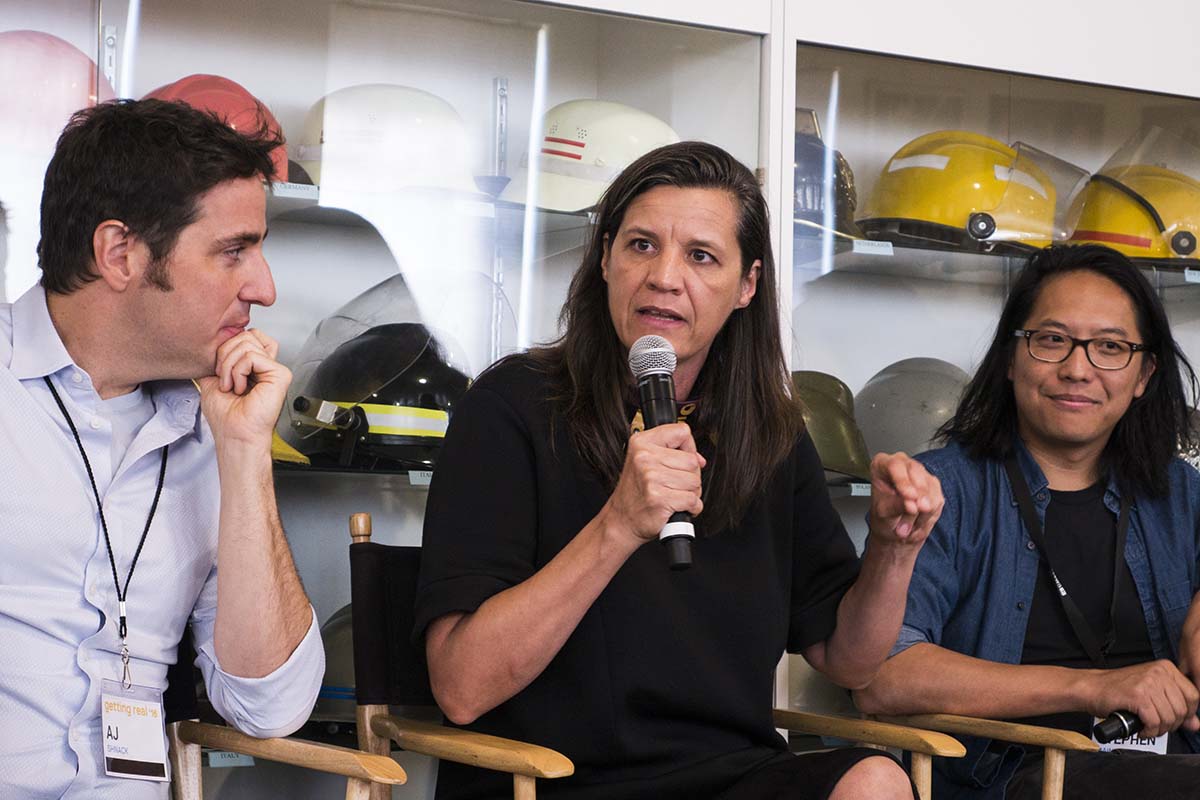 You are 40 years old! How time flies.

Time, consciousness, and cinema are like friends who hold mirrors up for each other.

As I am now some 32 years into a life of film work, I think about the three threads that tangle and untangle with each other to affirm how time itself is more than simply linear. The three threads I attempt to acknowledge when I work are these: the history of filming, history itself (not a monolith but a maxilith!), and personal history (of each and all of us).

The history of filming is now clocking in at about 130 years. History itself? If we date it to the Big Bang, that’s 13.8 billion years. And we humans are exceptional if we live anything over 100 years and still know who we are. The history of filmmaking has only recently begun to outstretch the human lifespan. But with the incredibly recent technological shifts (that have all happened in the lifetime of IDA, as well as my own)—the advent of the internet, the creation of the cell phone camera, and the emergence of virtual technology and Artificial Intelligence—we can already tell that humans are being overpowered by the exponential scale and power of imagery that goes beyond our gorgeously complex, but limited, individual human capacities.

The advantage our vulnerable bodies give us over machines and algorithms is that we understand stakes. Whether we live in our denial or not, we all know that some unexpected day, we will die. The stakes of time, money, health, procreation, caregiving/receiving, and ethics are very real for those of us with bodies. Given the inequities among bodies on both historical and personal terms, we with bodies must face the stakes of representing each other in images. The very elusiveness of understanding one’s own personal history is a template for respecting what is so multifaceted, private, and often unknowable in the personal history of another. Yet we can relate to what it feels like to experience harm or kindness, understanding or lack of understanding. And we must own up to the responsibilities we have to each other. Hence the power of the real and real bodies in filmmaking.

We have our bodies, but images have eternity.

From my young childhood, I was taught to think about eternity. Raised a Seventh-Day Adventist, I was taught to behave morally on religious terms so that I might achieve eternal life (through the grace of Jesus Christ). I pondered the beginning of History, the Big Bang, Heaven, and what would happen if I made it to Heaven. Would everyone be there? Would we never age?

In my childhood, religion gave me a very peculiar way of seeing the world. Now cinema gives me different tools. Having had and lost religious faith, I am aware how often cinema demands that I place faith in it. The conceptual constructs created in my mind by religion inhabit the ways in which I have refashioned my devotion to cinema. I am frequently rewarded for such faith, not just in the work I do with others, but also in the films of others that I watch. That there are so many revelations, despite the many forms of pressure operative against filmmaking, feels miraculous.

The landscape in which we make films shifts constantly. And with such changes our awareness and the principles by which we make choices and compromises must recalibrate. The urgency of human rights, the brutality of violent systems of exclusion, the fights for recognition, opportunity and systemic change constantly challenge each of us to work differently.  The stakes of the real humble us and enrage us. When people somehow manage to make bold films against all odds, it gives the rest of us hope and inspiration anew.

Coming off of the ways in which making Cameraperson over many years helped me sort through what I experience as a cinematographer, I turned again to cinema’s plasticity and the new tools it might offer me when faced with the distress of my second parent succumbing to dementia. Together with trusted colleagues, my father and I learned new ways of knowing each other while making Dick Johnson Is Dead. We looked to cinema to help us imagine the unimaginable, to see the unseeable and to force ourselves to remember that fear can be forgotten when we laugh.

But in attempting to make a comedy about death and dementia, our mission wasn’t simply to do the impossible and reverse my father’s dementia and stop his death. We wanted to ask cinema to be an existential experiment. We treated cinema as a time machine we could climb into. We wanted an edit room that could rebuild a person as he was falling apart and out of our desperation about the impermanence of bodies, we wanted a stake in the immortality of images.

Each person’s unique consciousness and experience indicates to me that we each also possess our own singular cinema language. It is inside just waiting to come out when we are willing to share it and if we believe it is needed enough to fight for and play with.

I think that we are seeing the magnificent explosion of forms happening in cinema right now because we urgently need each other’s perspective and we need to catch more glimpses of what we can’t know yet. We are trying to find our way into the future without fear and submission to the forces of violence. It’s messy work, with many pitfalls and false starts. It requires courage and constant self-reflection. Being open to devastating critique from those we respect is necessary, and there are very real stakes. Onward together for all the time we’ve got!

Kirsten Johnson is a documentary filmmaker and cinematographer. She has filmed over 70 documentaries, and directed seven including Cameraperson and Dick Johnson Is Dead.