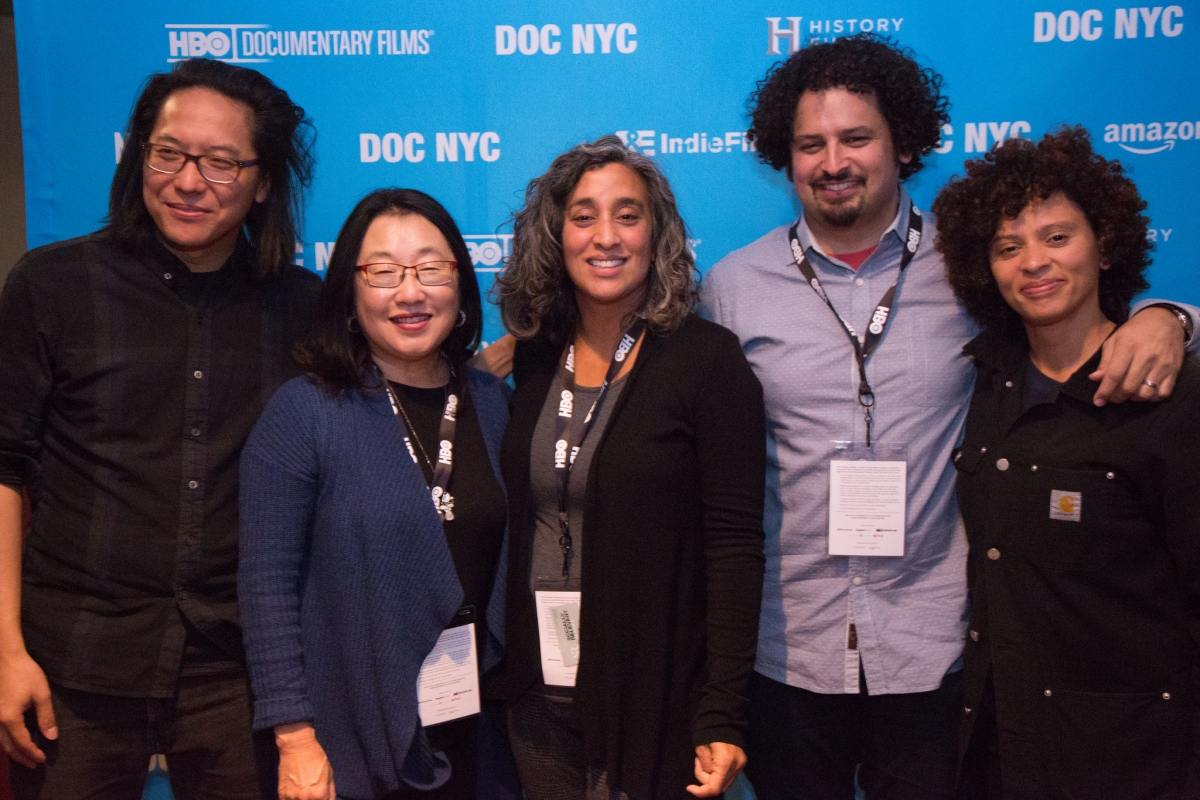 True to its tagline, "America's largest documentary festival," DOC NYC concluded its eight edition last month, having presented more than 250 films and panels throughout New York, with more than 350 filmmakers and special guests among the thousands of attendees.

As I was about to head across the pond to attend IDFA in Amsterdam, I was only able to attend two films. The festival kicked off with the New York premiere of Greg Barker's The Final Year. The film presents a unique insiders' account of President Barack Obama's foreign policy team during its last year in office. Barker was afforded remarkable access inside the White House and State Department to capture the inner workings of the Obama Administration as the team prepared to leave power after eight years. The post-screening discussion featured Barker and former Deputy National Security Advisor Ben Rhodes. Given the results of the 2016 election and the first year of the Trump presidency, the film and post-screening discussion evoked a sense of longing and nostalgia, and the film will certainly serve as an important document of that time. The Final Year opens in theaters January 19, the one-year anniversary of Obama's final full day as president, and will air on HBO in Spring 2018.

I was also able to catch the festival's "Centerpiece" film, Rachel Dretzin's Far from the Tree. The film is an adaptation of Andrew Solomon's bestselling book of the same title, which examines how parents face various extreme differences of their children. It was influenced by Solomon's own experience growing up gay and later becoming a parent. The film expands beyond the characters featured in the book, including Solomon, to include families that confront conditions such as autism, dwarfism and Down syndrome. In all these cases, the families demonstrate the power of patience, love and acceptance; challenge notions of what is "normal"; and help to dispel stereotypes and fears about what might be considered "abnormal."

In addition to the films, DOC NYC presented another year of DOC NYC PRO, a line-up of panels and master classes aimed at professionals and filmmakers who want to hone their craft and gain insight from individuals who are at the forefront in various realms in the nonfiction world.

Day one of DOC NYC PRO, "The State of Documentary Day," explored new trends in content, financing, post-production and distribution. IDA Executive Director Simon Kilmurry delivered the first "Morning Manifesto" with a discussion about funding for independent filmmakers and thoughts about how to provide support more widely for the field, to a broader community. He cited IDA's "State of the Field" study about how people make a living in the documentary world—and how many docmakers go into debt to create their work. However, he did feel that there was an upsurge in foundations funding more media projects.

The Morning Manifesto was followed by "What's Your POV?", a panel comprised of filmmakers Nanfu Wang (I Am Another You), Jennifer Brea (Unrest) and Drew Xanthopoulos (The Sensitives), who showed clips from their films and then discussed how they came to their story and how their respective styles matched the subject. Other issues that were discussed included ethical questions about whether to film certain things, how these films might affect change, how one's POV can be an act of love and compassion, and how documentaries enable us to see ourselves reflected in others.

The next panel, "The State of Funding: Budgets, Grants & More," featured representatives from Chicken & Egg Pictures, Fork Films, LEF Fund and the Bertha Fund and centered on the big issue of what makes a good proposal, how the sample work has to match the proposal, and how one should put the strongest material first. The need for understanding the mission of a funder was also discussed, but it was also noted that even veteran filmmakers struggle with getting their films funded, and that it's easier to get into Harvard than to get a grant from Sundance. The panelists also advised to not be totally discouraged by "nos" and that with things like crowdfunding, there are ways to be more entrepreneurial with one's resource development. The reality check was also underscored, in that most filmmakers often do other things such as teaching, editing, etc. for other sources of income. These days, there is no one formula for funding; it involves a mix of sources—grants, crowdfunding, investments, individual donors, etc. Moderator Tracy Holder concluded the panel with a "Filmmaker's Toast": "May the funding flow like wine and may the rights-holders give freely."

The "Post-Production Secrets" panel, featuring Joe Beirne and Ben Murray from Technicolor Postworks and filmmaker Daniel Di Mauro (Get Me Roger Stone), discussed a range of post-production scenarios—editing, color correction, sound design and final delivery. Some of the challenges can come when one has been working on a film over a long period of time with different cameras and formats. Planning in advance for post, when dealing with a hodge-podge of material, is important. The panelists stressed key important things they wished filmmakers would consider as they approach post: (1) organization, (2) sound and (3) frame rate. The overall takeaway is to put some time into being organized, with the realization that every film is unique.

The final panel of the day, "Enter the Market," looked at the growing number of production and distribution outlets in the marketplace. Panelists included Josh Braun (Submarine), Eric Sloss (Cinetic), Natalie Mooallem (The Orchard) and John Von Thaden (Magnolia Pictures). The general consensus among the panelists was that while many filmmakers think about theatrical distribution, the market is now very multi-faceted with so many homes for docs—TV, Amazon, Netflix, Hulu, etc. Sloss said the reality is that income for most docs comes from TV or SVOD, and that theatrical is not as reliable. But all agreed that these days it's basically a Wild West atmosphere, where everyone is trying all kinds of things, such as episodic projects and limited series. The overall consensus is that film distribution is a ton of work and one needs to find the right match. Other pieces of advice that the panelists offered: Don't come into the market with a particular expectation of what you want; wait and let the market respond, and approach each offer with as open a mind as possible. "When you have a distributor, you kind of have the wind at your back because they have experience dealing with all these platforms," Mooallem concluded.

Day three of DOC NYC PRO was devoted to "Mastering Your Craft: Editing Day." The first of three afternoon panels, "Writing for Nonfiction," featured Cecilia Aldarondo (Memories of a Penitent Heart), David Riker (Dirty Wars), Sara Burns (The Central Park Five) and Yance Ford (Strong Island). Each filmmaker explained where and how the story for their film began. Burns wrote the book first and therefore had already created a relationship with her characters. But she noted that the film allowed them to speak and tell their own stories, which was very meaningful. For Aldarondo, the starting point came from her mother finding a box of 8mm films featuring the filmmaker's deceased uncle; that led to her excavation of the story. From the beginning she thought of the work as both autobiographical and intimate but also very global. In terms of actual writing, she would try writing things but it felt too stiff and stilted, so her editor gave her an audio recorder to just speak; much of the voiceover in the film is not scripted, but spoken extemporaneously. For Ford's Strong Island, while the film is ostensibly about the murder of his brother, the question became not what, but why. That's when the writing became different. Ford was keeping a production journal that allowed his writing to have this interior voice. He wanted Strong Island to feel as visceral as the experience was for his family—"like your skin was peeled back." For Riker's involvement with Dirty Wars, about the war on terror, director Richard Rowley brought Riker in to look at a long cut. "I couldn't bear it; it was horrific," Riker said. "A catalog of horrors." So he became involved as a writer. For him, the biggest challenge was recognizing what order to tell the story so that people would "lean forward." The main takeaway for this session is that writing as it relates to documentary storytelling often begins with treatments but then leapfrogs into the process of discovery in the editing room. Writing in this genre, one needs to be open to change, to listen to the material. The idea is to work with your editor in the final crafting of the story, and be open to surprise.

The second afternoon panel of the day, "Tales from the Edit Room," featured Maya Mumma (O.J.: Made in America), Fiona Otway (Iraq in Fragments) and David Teague (The Departure; Life, Animated). The panelists showed clips from their work, and the discussion unfolded with thoughts about how editors are often trying to create active scenes, and how it's an interesting time with expanded access to both content and form. The panelists noted the parallels between editing and writing, and advised editors to step away, come back, try things out and give things time.

The final panel of the day, "Power & Perspective in Storytelling," was moderated by Renee Tajima-Peña (No Mas Bebés) and included Nadia Hallgren (Motherland), Geeta Gandbhir (Armed with Faith), Stephen Maing (High Tech, Low Life) and Edwin Martinez (To Be Heard). This cross-racial panel discussed issues around communities as both insiders and outsiders (as it relates to class, race, gender, sexuality, etc.), with the major question: Who gets to tell these various stories and how do filmmakers navigate the process? It seems that all these makers have done work as both insiders and outsiders, but as Maing pointed out, there's a kind of shorthand that comes with working on a story in the community that you're from. Gandbhir advised that if you're not from that community, make sure you partner with someone who is. It's critical to have this kind of alliance. The panelists addressed the need to smash the glass ceiling of the traditional colonial lens and to disrupt the white supremacist power structure—but they also acknowledged that people of the culture don't always necessarily make good work. Finally, the filmmakers addressed the need for better access to funding and distribution, to look at the changing dynamics and to question the current structures.

Kathy Brew is an independent filmmaker, artist, writer, curator, and educator. She teaches in graduate programs at The New School and The School of Visual Arts. She is currently Guest Curator for MoMA's Doc Fortnight.

END_OF_DOCUMENT_TOKEN_TO_BE_REPLACED

Navigating the River: The Hidden Colonialism of Documentary