Documentary vs. The Provincial: Marcel Ophuls at the 2017 Jihlava Documentary Film Festival 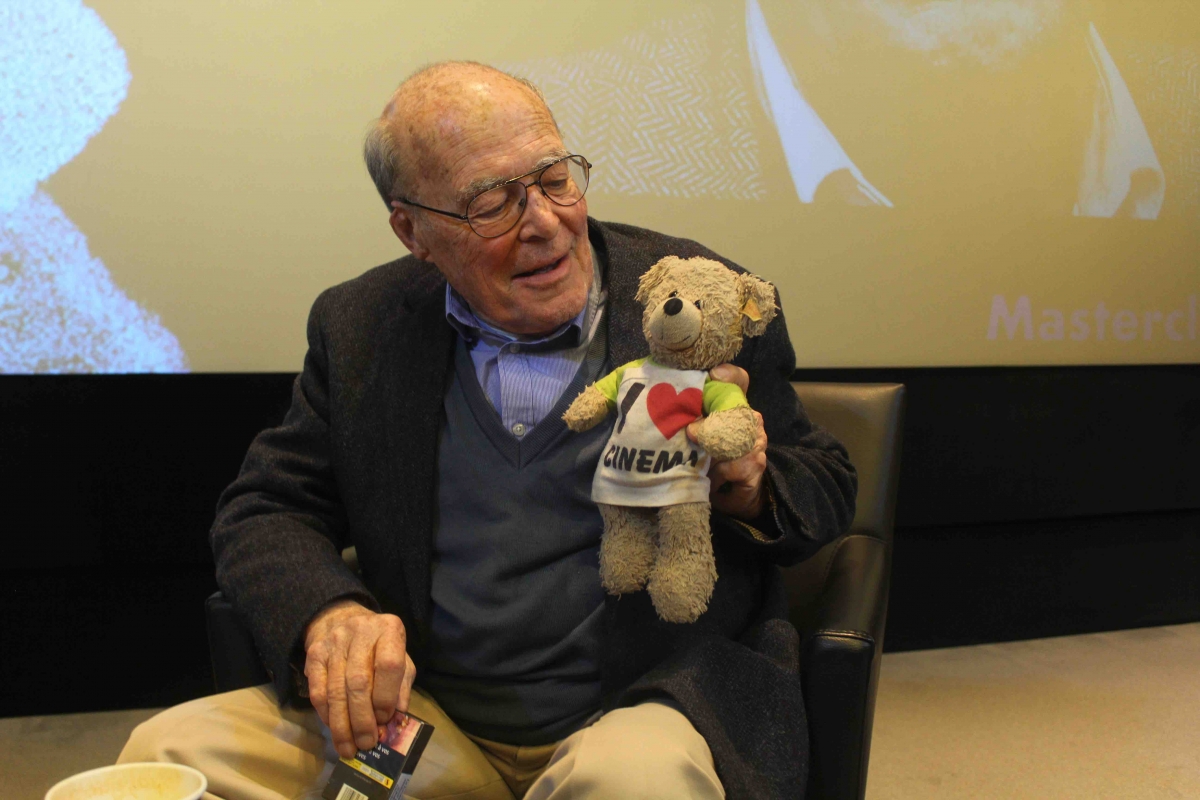 In the provinces of Central Europe, two of the winning films at the Jihlava International Documentary Film Festival show the persistence of provincial views of history. In Dmitry Bogolubov's The Wall, voted the Best World Documentary, mourners in a solemn procession under a grey Moscow sky place red carnations at the tomb of Josef Stalin. Fixed long takes without commentary reflect the rigid devotion of the commemorators to the cult of the dictator. In the devotees' reverence of Stalin, they bow before the myth of the great leader despite evidence of his tyranny.

In Pavel Křemen's Milda, awarded best film by the Festival's Student Jury, former General Secretary of the Czech Communist Party Miloš Jakeš offers himself for selfies with his fellow citizens. Once a laughingstock for his clumsy speech, Jakeš has now become an object of curiosity, nostalgia and celebrity, having outlived democratic President Václav Havel. Defiant in his survival, Jakeš promises protestors that he will "defend the past."

The films reveal how provincial views of the past—insular, inflexible and irrational—have expanded beyond parochial places. The consequences of provincialism are neither minor nor abstract; the movies illustrate how provincial ideas preserve bloody strongmen as revered icons and turn national embarrassments into quaint old men.

The tendency to reduce and warp the past has a tenacious grasp, as shown in the history of films screened at Jihlava. The event originated in 1997 as a way to bring culture to a provincial town between Bohemia and Moravia. Yet the decade of post-revolutionary possibility has given way to a revived and widespread provincialism. Ten years ago, the festival screened its opening film, Miloš Zeman—One Politician's Obituary. But since then, Zeman has resuscitated his career to become the current president of the Czech Republic, a fierce opponent of immigration and promoter of contentious populist policies. Ten years ago, the festival showed Kalinovski Square, a film about the Belarusian presidential election of March 2006. In the movie an old man grouses, "Why the fuck do we need democracy?" Recent events in Poland and Hungary show that his disdain had spread across the region and around the world.

However, the works of the festival's recipient of the Contribution to World Cinema Award offer a tonic to provincialism. The career of Marcel Ophuls in his 90th year expands blinkered views of the past. His movies show the struggles of a nonfiction filmmaker in challenging insular ideas and facing the perplexities of history. A selection of his works screened at Jihlava and our extended one-on-one interview create an overview of his achievements.

Ophuls dislikes the word "documentarian," since it conjures up a musty archive rather than the vital mix of necessity and chance in his time as a filmmaker. He began directing films in 1960. The son of fiction filmmaker Max Ophuls, one of the great orchestrators of the moving camera, Marcel turned to long-form TV documentaries, with their drama played out in seated encounters, in order to continue his career. The younger Ophuls attributes his aesthetic to necessity, since "It's hard to do a tracking shot around a talking head!"

But the chances inherent to nonfiction filmmaking drew out Ophuls' talents, particularly as an interviewer. His lack of pretension, sharp observations with occasional testiness and guile; his fluent French, German and American English, with a wide wheezing laugh that won over Jihlava audiences; his sympathy, sense of the ridiculous, judicious silence and charm—especially when speaking French—all serve him well as an interviewer, as two of his famous encounters make clear. The Sorrow and the Pity (1969) overturns the belief in French heroism during World War II with the reality of collaboration of the Vichy regime. In the film, Ophuls gets shopkeeper Marius Klein to justify a newspaper ad that Klein printed to proclaim that he was not Jewish. In A Sense of Loss (1972), Ophuls elicits the recollections of a Belfast couple that lost their infant son in The Troubles. The mother witnessed a television report where children died in a fire, without realizing her son was among the victims. She concludes, without tears, "We had a home."

Ophuls told me both moments came from both preparation and chance: he had researched Klein's ad but discovered the shopkeeper's store on a walk back from another failed interview. He had arranged to speak to the Belfast couple through his Irish assistant director and later producer, Ana Carrigan, but had not known that the mother discovered her son's death after watching the TV report. The unwittingly revealing and poignant interviews echo in the best of contemporary documentaries, such as the eye examinations that become revelations of past atrocities in Joshua Oppenheimer's The Look of Silence (2015).

But Ophuls also faced obstacles, and the need to alter his techniques, in order to illuminate dark regions of the past. The director confided a personal story to the audience following the four-and-a-half hour screening of Hotel Terminus: The Life and Times of Klaus Barbie (1988). He explained how Barbie had been extradited to France to face trial as the former head of the Gestapo in Lyon. However, French President François Mitterand delayed Barbie's trial until the film’s producer ran out of money. In despair, Ophuls prepared sleeping pills to commit suicide, only to be saved by his production team. Overcoming what appeared an insuperable stop to his film, Ophuls went on to win the Academy Award for Best Documentary Feature.

The changes to his techniques display the determined creativity needed to uproot provincial views of history. The Sorrow and the Pity remains Ophuls' breakthrough film, particularly in its exemplary use of archival materials. The images of Frenchmen giving the Nazi salute still shock, accompanied by Maurice Chevalier's song with the cheerful refrain, "France smells so good!" A film advertisement from the period, in which a narrator advises women to paint on silk stockings, embodies the frivolity, self-delusions and self-preservation prevailing over the majority of Frenchmen during the Vichy era.

But as Ophuls told me, he came to agree with Claude Lanzmann that "the use of archival footage became less effective." Ophuls' works change from Munich or Peace in Our Time (1967), where he serves as a host and presenter of archival footage of the 1938 Munich Agreement, to Hotel Terminus. In the later film, shots of corridors outside former torture chambers only feel like archival footage, as they echo with the words of survivors.

Despite Ophuls' skill and renown, provincial views of history prove hard to shake. They become ingrained in both personal and national identities. The Sorrow and the Pity came out of the challenges to authority in May 1968 in France. Nonetheless, French television delayed broadcasting the penetrating exposé of Vichy until 1981.

Audiences may avoid documentaries that confront provincial views of the past and, however misguidedly, ignore what they see as someone else's history. Despite its classic status, The Sorrow and the Pity did not draw in young Czech filmgoers in Jihlava, as Ophuls noted with good-natured surprise: "There were only two-and-a-half people people at the screening of my most famous film!"

But the same theater was packed for the showing of Munich, Ophuls' movie about the 1938 agreement that ceded the areas of the Czech Sudetenland to Nazi Germany. Audiences engaged with a movie that touched directly on their national history and that contested provincial views of their country. The hall of Czech spectators bristled at the words of Daladier, former Prime Minister of France: "I thought [the Agreement] would be the great joy of all the countries of Europe, if one disregards the Czechs."

This comment and reaction it provoked show the value of Ophuls' films. They answer the plea of untrustworthy interviewees in Hotel Terminus about Barbie's crimes: "This happened so many years ago—why bring it up now?" Ophuls' works expose the gloss over the past as both insubstantial and unsustainable. His movies become moral entertainments with practical use. They reveal how wrongheaded belief in appeasement led to World War II, as misbegotten notions of French superiority caused the German occupation and collaborations of Vichy. Ophuls' movies play as extended corrections to police procedurals on TV. His long films uncover the knotty path of truth, as they slake the thirst for justice that builds over time.

Told that his movies will be watched as long as there are documentaries, Ophuls wonders how much longer documentaries and cinema itself will last. But he remains excited at 90 about discoveries during filming—"That's how you get the best stuff: spontaneously"—and the narratives that emerge in editing, where "You steer an audience to find out the truth for themselves."

The director can take heart from the words of the Student Jury in the provincial town of Jihlava. In awarding their prize to Milda, the movie about the former communist leader, the student jurors wrote that they want the picture "to enter the consciousness of the younger generation as we believe that in their hands lies the chance to change our society and to avoid making the same mistakes." Although provincial views of history persist, the pertinence of the past is continually changing. At the festival screening of The Reagan Show, I asked a young Polish woman what drew her to a documentary about a US President in the decade before she was born. She replied, seeking an understanding beyond her lifetime: "That's why I'm here"—and why the films of Marcel Ophuls will stay.

Gabriel M. Paletz is a teacher of documentary, screenwriting and film comedy in Prague, Czech Republic. He has regularly covered many festivals for Documentary, including Jihlava since 2006, a suitable span of time for a film by Marcel Ophuls.