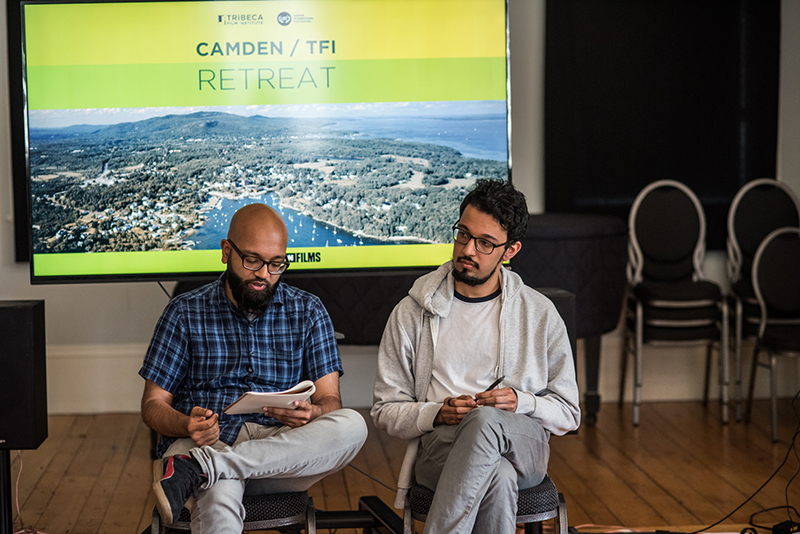 Aman and Zeshawn captured their experiences for us during this special week in a diary.

In the 2004 documentary Fade to Black, rapper Jay-Z faces insurmountable pressure working on his then farewell recording, The Black Album. In one scene, Jay-Z is going through a bunch of beats that producer Timbaland has brought to his attention, but none of them inspire him and he's starting to get frustrated. Then, Timbaland casually skips past a beat in his catalogue and Jay-Z's eyes perk up. He tells the producer to play back that beat in its entirety. Jay-Z jumps out of his chair when the beat plays and can't stop bopping his head. He feels so inspired that he immediately records lyrics over it, without writing anything down. And all in one take. That song becomes his smash hit "Dirt off Your Shoulder."

That very same giddy level of excitement, that zeal, is what the Camden/TFI Retreat did for us. After picking the brains of some of the best and brightest names in the documentary film industry, we've hit the ground running at warp speed, spending hour after hour in production ever since.

There were two things we knew about Maine, prior to us arriving in Camden: 1) The movie Iron Giant took place there, and that movie was dope (Yes, we know it was an animated film, but it felt real.); and 2) LOBSTER. Neither of those have anything to do with documentary film, but that's kind of what we were expecting: A weeklong vacation with some film-talk sprinkled in. We could not have been more wrong. What we found in Camden was a community of filmmakers and film enthusiasts who helped foster creativity, conversation and collaboration, all set against the backdrop of an incredible town. 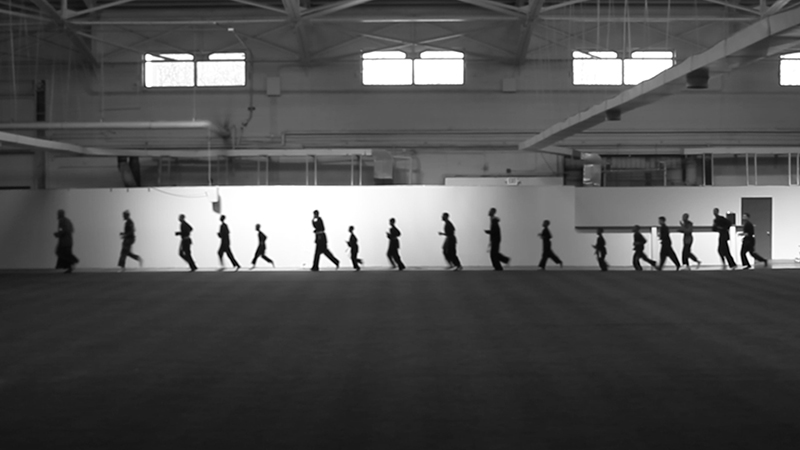 Our film Two Gods tells the story of a group of Muslim morticians who bring young men into their shops to build caskets and wash bodies—and teach them life lessons through the lens of death. But when they meet one boy, Furquan, they realize they've found a kid torn between two lives—one while he's in the shop, striving to better, and one outside, on the streets.

It's been an incredible experience making this film, but a tough journey, so we were excited (and nervous) to be able to go to Camden and share what we've been working on.

Two Gods is our first film, and trying to navigate the process of getting a movie made can be stressful and daunting. What Camden/TFI did was not only bring in people who could help us; they brought in the best.

They include two-time Oscar nominee Marshall Curry; Enat Sidi, the visionary editor on such iconic docs as Jesus Camp, Detropia, The Wolfpack and so many others; and Andrea Meditch and Amy Hobby, two heavyweights whose professional titles as "producers" don't do them justice, considering the magnitude of hits they've put out, such as What Happened, Miss Simone?, Man on Wire and Grizzly Man. 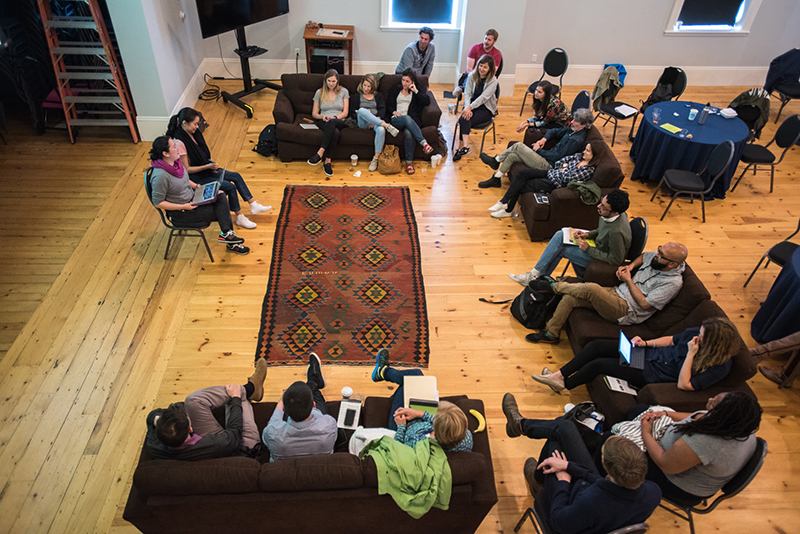 Courtney Sexton and Alexandra Hannibal from CNN Films and Josh Braun from Submarine Entertainment were also there to offer their insights into the process and the industry. Being able to get their feedback and advice was the best early Christmas gift ever. And we're Muslim.

What made this retreat so unique was that it didn't start with a pitch session, or screening footage; it started with two days of bonding with the other filmmaking teams. We hiked some beautiful trails, had bonfires and laughed a lot. Even before we began, we felt like we really knew everyone there with us.

Then came Day One, which started with each team presenting footage to the group. Each team was in different stages of production and post-production. We were floored by how incredible the other works were. We reflexively looked back at the Camden and TFI teams and wanted to say, "You're sure we're supposed to be here?"

But as the week progressed, we learned what made our story special. We were reminded why we fell in love with our film to begin with—and that is so often overlooked for filmmakers. We get so bogged down in the minutia of the craft, the pursuit of access and that "wow" moment. But we are filled with self-doubt along the way; sometimes it's important to step back and appreciate what you've been creating. Seeing the spark in people's eyes when they watch a scene for the first time is incredible. 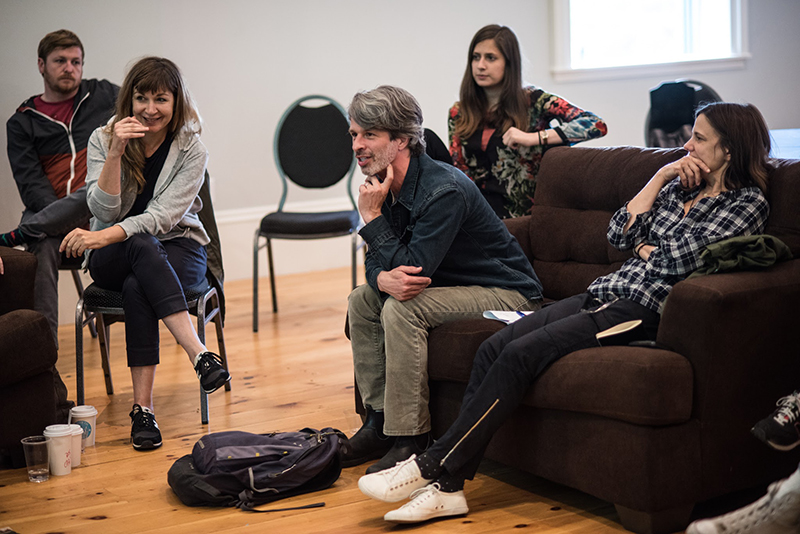 But it wasn't all kumbaya and hand-holding. We got plenty of notes on what was missing, what could be done to help shape our scenes into powerful sequences and how to tell this story effectively. We learned about directing from Marshall, building an edit and a world for your film from Enat (she shared some great examples of intros and atmosphere-building), and advice and insight from Amy, Andrea and Josh about how to release your film in the best possible way. And that included one-on-one sessions with each mentor, where we got to have conversations specific to our films.

One important thing we cherished was the honesty—the chance to talk about our challenges, our struggles and what we needed help with. We rarely get a chance to do that while we make films, and we got to do that nonstop in Camden. We were challenged—a lot. But that was so important for us because we had to defend our vision, our purpose and our goals for the film. And in those conversations we were able to discover new insights and new directions.

We also learned just as much, if not more at times, from our fellow filmmaking teams. After all, these were our partners in the trenches. We shared stories (some success, others horror) and took the time to talk about our processes together. It was a space where we all wanted to learn about each other's projects because we were genuinely inspired by one another.

The last couple of days, we spent 30 minutes in our own teams and outlined all the arcs of our film. As we sat there after this week of information, notes and ideas, we had to finally take a step back and think critically. And we had to verbalize that. One of the best pieces of advice we heard was from Marshall, who said that you should always be talking about your film to people you meet—whether on an airplane or in a grocery store— because that's how you see what people react to. You practice honing in on the story and find out what the basic elements are to communicating the core of your film most effectively. 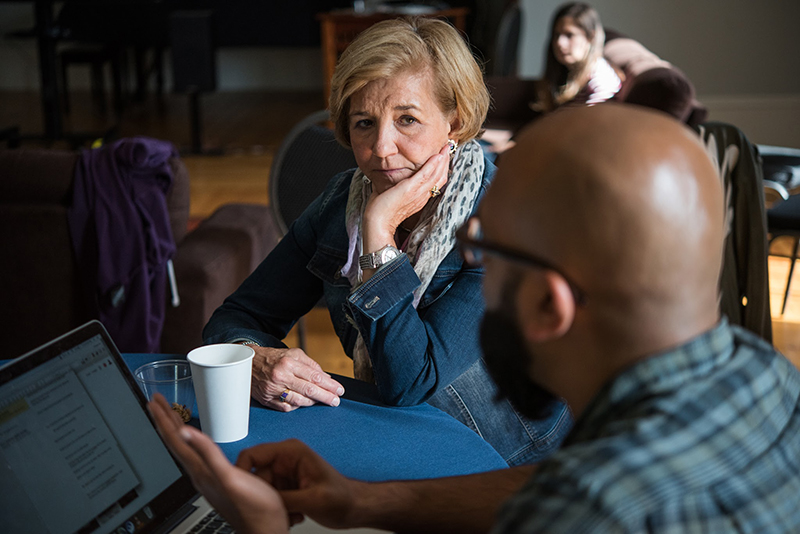 A highlight of the retreat for us was being in Camden itself, and that included engaging with the local community. One night, the CIFF organizers treated us to an intimate gathering at a local festival supporter's home. Attending were other CIFF supporters who were eager to hear about each of our projects and were just as excited as we were to see what the finished products would look like. We were blown away. Where else in the country do local residents get pumped up to learn about films that haven't even been made yet, from up-and-coming filmmakers?

As we sat in front of the room on that last day, talking through our film, our arcs and our story, we realized we had some work to do. But that wasn't daunting anymore. It was exciting and inspiring and exactly where we needed to be. We couldn't have been more thankful for the experience, and especially to the team at CIFF for hosting such an incredible retreat for us filmmakers. Here's to going back into the trenches—spirits high and camera ready, with a notebook full of possibilities.

Aman Ali is an award-winning storyteller and one of the most prominent social media personalities in the Muslim community today. His passionate and animated tales he regularly posts to Facebook continue to go viral by the thousands daily. He's a frequent guest on media outlets such as The New York Times, CNN, NBC News, HBO, BBC and NPR.

Zeshawn Ali is a filmmaker and director based in Brooklyn. He's a graduate of NYU's Tisch School of the Arts and his films have screened at festivals across the country. He also works as a producer at Droga5, one of the top commercial agencies in the country.