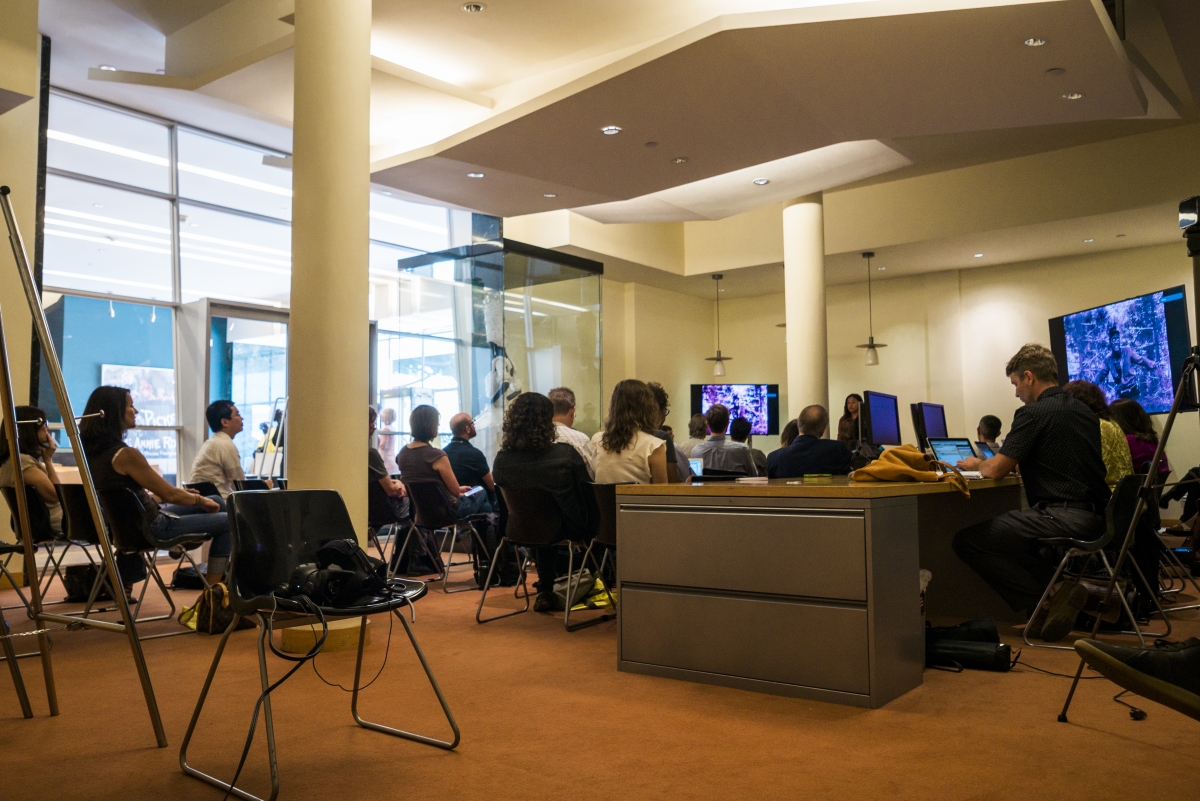 Shortly after Facebook acquired Oculus VR, which developed the Oculus Rift headset, CEO Mark Zuckerberg, in an interview in MIT Technology Review, asserted, "Immersive virtual and augmented reality will become a part of people's everyday life. History suggests there will be more platforms to come, and whoever builds and defines these will shape the future and reap the benefits."

In the short time since that 2014 acquisition, VR has dominated the conversations among the tech and media cognoscenti, establishing itself as a must-program topic among festival, market and conference mavens. Following IDA's VR workshop this past April, the Getting Real '16 Conference presented a VR Doc Summit - essentially a strategic planning meeting designed to address issues and challenges that docmakers are facing in the VR space, particularly with respect to funding, technology, exhibition and distribution.

The Summit, which attracted a cross-section of VR producers, docmakers, funders and educators, was conceived and produced in collaboration with a stellar Steering Committee composed of filmmaker Brad Lichtenstein (Across the Line); Kamal Sinclair, director of the New Frontier Lab Programs at Sundance Institute; and filmmaker Kel O'Neill (The Ark). Each of these individuals, along with POV Digital Executive Producer Adnaan Wasey and documentary filmmaker and journalist Cassandra Herrman, delivered compelling presentations about working in the VR space.

Sundance Institute's New Frontier showcases artists working at the convergence of film, art, media, live performance, music and technology. Further aiding in pushing these boundaries is the New Frontier Story Lab, which supports development of this work. "At Sundance, our mandate is to follow the artists and storytellers that are hacking into the communication architecture," Sinclair declared at the VR Summit.

Sinclair presented a mapping of the landscape of working in VR, through topics such as funding, tools of production, different genres of VR, distribution channels and landmark VR projects. She invited attendees to participate in the mapping, encouraging them to add questions or comments to the topics on the white board at the front of the room. "The VR landscape is so dynamic and volatile that even the most plugged-in people are only seeing some fraction of the whole," Sinclair noted in an interview after the session. "By excavating the expertise in the room, we were more likely to give a full picture of the VR field."

"This is changing who we are as a society," Sinclair maintained at the session "With numerous technologies, it will change even more. We need to be in the room helping to guide it." Inclusion is a huge concern for those keeping a close watch on the VR industry, in which women and people of color are poorly represented. Recognizing early the lack of diversity is critical and provides the chance to change the course, Sinclair asserted. "We do have the power. It's early enough that we can do it. That is why this mapping is so important. It's about identifying the critical interventions that we can make now, so that we don't repeat the pitfalls of the past in innovation fervor."

One bona fide VR pioneer, Nonny de la Peña, is renowned as the "Godmother of Virtual Reality." She co-founded the Santa Monica-based Emblematic Group, a leading creator of virtual reality experiences and immersive journalism. Although she was not able to attend the VR Session, her name came up repeatedly—particularly during the discussion of Across the Line, an immersive reality experience of a patient who enters a health care center to have an abortion. She co-created the project with Brad Lichtenstein and Jeff Fitzsimmons, and Planned Parenthood was the executive producer.

As Lichtenstein (As Goes Janesville) related to the VR Summit attendees, the goal in VR storytelling, like that in documentary, is "to take the audience inside a world they may not inhabit and to understand something about that world differently than before, in the hope that it leads to bridging divides and change….The number-one word in VR is ‘empathy,' which is what you are trying to achieve with your audience."

Litchenstein discussed the pre-production process for Across the Line, in which he invited everyone involved in the production to a workshop - in an abortion clinic and examining room. The group explored the issue of abortion, then each participant shared a personal story about making the decision to go through with the procedure. This workshop process enabled the filmmaking team to shape the narrative. "This is a way to address some of the issues around agency and representation and relationship in this space of VR that we are all trying to figure out together," Lichtenstein explained.

Filmmaker/journalist Cassandra Herrman works with de la Peña at Emblematic Group. Her credits include three VR projects for Frontline, as well as Death in Plain Sight, an installment from the Al Jazeera series Fault Lines; the episode addresses domestic homicide and gun legislature. The VR project Kiya, an intense recreation of a 2013 murder-suicide in North Charleston, South Carolina, was developed as a companion piece to Death in Plain Sight; the audio for the project was constructed entirely from 911 calls, police records and interviews with the victims' sisters, who were witnesses. "This raises issues about context," Herman admitted. "It brings up questions of trivializing suffering and trauma and how you grapple with that. When you go through this experience, what are you supposed to leave with? What is the take-away? People have had wildly different reactions to these pieces."

Kel O'Neill is one half of the independent filmmaking team Jongsma + O'Neill, which makes interactive documentaries and VR installation-based work. "We have ideas about story and we want to pour them into interesting forms," he explained. O'Neill, also a senior fellow at The Economist's Media Lab, helps to imagine what VR is to them. He was a consultant on two projects; the first, Ziv Schneider and Laura Chen's RecoVR Mosul, took pieces from the Mosul Museum that had been destroyed by ISIS and recreated them in virtual reality. O'Neill emphasized that the objects are tangible yet intangible, "People talk about this being the empathy machine," he explained. "But it's equal parts the alienation machine. There is something about the falseness and the kind of tension between the falseness and the immersion and the reality that is really fascinating. We should keep moving it back a little bit, rather than immediately thinking about how we use this to create social change before we completely understand it."

Donning his filmmaker hat, O'Neill talked about distribution and the grim reality of the life of a film after the festival circuit, when many films don't find homes and filmmakers didn't get paid to show their work. "This room should be filled with people from Hulu, Netflix, HBO and other distributors trying to figure out what VR content exists so they can take it outside of the festival context," he maintained. He feels that over the last year there has been sufficient and fantastic work by independent artists, and there needs to be a place where this work can be seen. He advised the attendees, "Go invite your friends who work for a distributor out for drinks and put a ton of pressure on them; maybe they will go out and start making use of some of the great indie work that's out there."

Adnaan Wasey, POV's Digital Executive Producer, presented a pessimistic yet humorous explanation as to why POV isn't completely in the VR sphere at the present time. "We have been in VR, and we have left VR, but that is not to say we are not going to come back to VR," he demurred. "We are not doing VR as of this moment. Our thoughts - as a nonprofit, as a public media, as a tiny organization, as people who are mostly not technical - are that experimentation with VR is expensive. We can't pay for it. It's time-consuming. It's distracting us from other things we can do better, or even well. If we were to do this, would we be leading or lagging? It's likely we'd be lagging, so it's a good reason for us not to do it. We like to lead in everything we do."

1) VR is not accessible at current prices; it is still very expensive.

2) VR sales are flat; if gamers aren't buying it, who will?

3) VR is not a mainstream technology; 2 percent of households own VR headsets.

4) VR makes viewers ill; is long-term viewing possible when you get ill in one minute?

5) VR user experience is rudimentary; we are like Patrick Swayze's character in Ghost, who can experience everything but can't affect it.

6) VR predictions show every kind of future; how far will forecasts need to retreat before we question the viability of VR?

7) The VR industry is inventing excuses for slow adoption.

8) The VR industry is expecting games, not films. Games and films have never overlapped. Will VR and documentary?

9) Other technologies are expected to overtake VR.

10) Film organizations are on the VR bandwagon.

"POV has done a little VR," Wasney admitted. "You can download some tools we've made, we repackaged them for educational material. We run a lab. We foster other kinds of VR work. VR is still expensive. It is set for enthusiasts, not the mainstream."

Only time will tell how mainstream VR will become and the future innovations that will emerge. According to Business Insider, Facebook is now offering an Oculus-ready laptop that will work with the Oculus Rift VR headset. Hopefully this will be an opportunity to see more content from VR artists.

END_OF_DOCUMENT_TOKEN_TO_BE_REPLACED

Virtual Reality Gets a Big Platform at IDFA