'(In)Visible Portraits': A Love Letter to Black Women & Education for Everyone Else 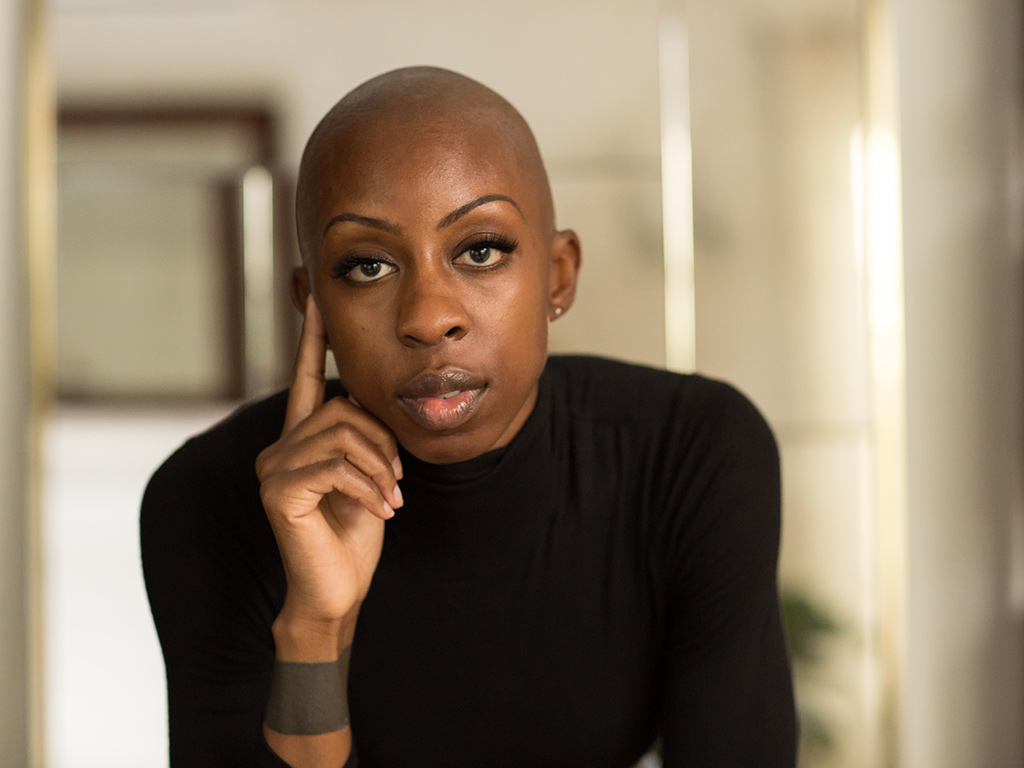 Reclaiming and reshaping narrative around Black women by Black women is liberatory work, and is what Oge Egbuonu executes so carefully and lovingly in her debut documentary, (In)Visible Portraits.

The film opens with shots held over polaroids of Black women. We see these images sliced out of their white frames and placed into water. The process is known as an emulsion lift transfer, in which a photo’s positive film layer is removed from its negative and submerged into water. With time, the plastic covering the film lifts and all that is left is the floating positive film layer, which is later transposed onto a new surface—in this case, a blank canvas.

In addition to serving as a beautiful piece of imagery, the process poetically communicates what Egbuonu’s film does for Black women. It frees our image from the bounds placed on it to make visible its own truth, uncontained and shaped by itself.

Over the course of 90 minutes, Egbuonu and the women in her film painstakingly expose the many negative images that have served as the persistent narrative of Black women for centuries, contributing not only to how Black women have been forced to see ourselves, but also how the world has reconciled its treatment of the Black woman who, as cited by Malcolm X in the film, is "the most disrespected, unprotected and neglected person in America."

With analysis provided by activists, mothers, daughters and scholars, these dominant images are peeled back and shed by the participants in the film. As it progresses, the resilient residue of these narratives floats away and what is left is a true image of Black women, fluid and free and healing.

The three sections of the film are bookmarked with spoken word poetry by Jazmine Williams, and the film is intercut with the painting of a portrait done in real time by Victoria Cassinova. Both serve as a documentation of the experiences of Black women but also as corrective portraiture creating space for new images and imagery to be formed.

For people so often deprived of the ability to see ourselves in our own image in popular culture and the media, (In)Visible Portraits provides a healing that feels like medicine.

But this lift transfer process the film takes us on is no easy pill to swallow. Its first 30 minutes are tasked with guiding viewers through a history of hurt experienced by Black women. That pain is a consequence of years of repeated abuse and exploitation, all of which have been justified by what Black feminist maven Patricia Hill-Collins terms the "controlling images"—namely the Mammy, the Jezebel and the Welfare Queen, as illuminate in this film.

Traversing between history and contemporary, archival footage and testimonies of lived experiences accompany scholarly breakdowns from Dr. Joy DeGruy, Dr. Melina Abdullah, Dr. Ruha Benjamin and Dr. Patricia Hill Collins, a powerfully stellar crew whose joint analysis reveals how these images have been indoctrinated into pop culture and policy and are fundamental in undercutting the atrocities committed against Black women, our bodies, families and humanity throughout time.

Within the first 30 minutes of the film, the movement from the gruesome details of Post Traumatic Slave Syndrome to the Jim Crow era to natal alienation to police brutality feels justifiably heavy and, at times, heartbreakingly heavy-handed. But when the reality of Black women is time and again hushed, if given a popular platform at all, the impulse to create a single work detailing an amalgamation of as many truths and history as possible is difficult to resist—perhaps necessary, even.

During her research for the film, Egbuonu didn’t draw from any documentary films; there were no documentaries exploring what (In)Visible Portraits does. In my research, it’s been difficult to name widely circulated documentaries that survey the experiences, narrative and position of Black women in American society with such detailed and deep critique. Although films like Ethnic Notions and Color Adjustment—made by one of my favorite filmmakers, Marlon Riggs—come to mind, nothing specifically focuses on the images of Black women and its consequences, making (In)Visible Portraits that much more of an educational and spiritual necessity.

And what goes into creating such dire work? For Egbuonu, who was experiencing depression around the time she began the film, the process of creating  (In)Visible Portraits was a rebirth, one that emerged from many sleepless nights and tear-filled days as she came to realize many of these truths for the first time herself.

The film, she maintains, "gave me permission to fully embody who I am, but also to continue to explore who I am. There was just so much history that I didn’t know."

These stories and histories not only empowered her but also filled her with much pain. "I made the choice to transmute those lower vibrational energies of anger and fear and sadness into what you see in the documentary, because I do realize that I owed it to our ancestors to do this," she says.

Her resilience to create (In)Visible Portraits through these emotions is echoed in the second section of the film, which critiques the framing of Black women as resilient and shows how this trait has been a necessity not only for the survival of Black women, but all Black people while simultaneously being a weapon wielded against Black women.

But it doesn’t stay there. The women in the film prod viewers, specifically Black women with the importance of continuing on through pain with faith. In moments of rawness, heavy silence and through tears of their own, the women interviewed begin to share more than simply a lesson via their analysis and expertise. It feels like talking to your mom after a long day of defeat, like a hug from a big sister letting you know she’s been through this too, it will be OK and how to be OK. The archival footage of Black women’s resistance seems to provide a proof of this and creates a small sense of relief from the heaviness of the last 30 minutes.

This relief turns into tearful joy in the last section of the film, entitled "Beautiful." Hearts are warmed and spirits deepen as young girls and young women take center stage, so confidently sharing their knowledge of self-worth and so eloquently talking through how they’ve learned to walk through the world despite the resistance they’ve encountered. We see their stories reflected in the stories of the older women in the film and by its end one thing is made clear. As Degruy says in the film, "I think a very critical piece to our being well is knowing our own stories and knowing and creating our own narrative…There’s no culture in the world that will readily and deliberately erase their history; we cannot erase ours."

(In)Visible Portraits ensures that Black women’s contribution to society, the cost of that contribution and the truth of what it means to be a Black woman is known. In a world that is still screaming for justice for the murder of Breonna Taylor and so many other unnamed Black women, this film serves as a reminder of why Black women are important and should not be forgotten. It should be a required text, especially in these times of erasure.

Despite the representation and scope of Black womanhood throughout history that the film brings forth, it feels impossible to not name the missing representation of Black trans women in the film during this specific moment in time when such invisibility is being actively called out. This omission is not a reason to not appreciate the film, but it does call for more documentation of the scope of Black womanhood.

Although Egbuonu says the film has been well received by many people who either learned this history for the first time or finally saw their experiences and history reflected, it is reported that it was not picked up by Sundance and Tribeca film festivals who, according to reports from Vanity Fair, did love the film but were unsure how they could categorize it into their programming.

(In)Visible Portraits goes out of its way to show that the consequence of not fitting into predestined categories is invisibility. The film’s distribution also illustrates that point.

Upon understanding the space that her film had the potential to fill, Egbuonu notes, "It’s not about just entertainment for me. It’s like, How can I educate the masses? Because I understand the power of it.

"I understand that what we’re shown in the media pretty much is propaganda," she continues. "I understand the power of imagination, so for me, it’s always been about and will continue to be about, How do I add to the unlearning and relearning of mass consciousness?"

Egbuonu decided to self-distribute the film on Vimeo, it can be viewed here now. Thankfully so.

Ashley Omoma is a recent documentary filmmaking graduate from the University of California Berkeley Graduate School of Journalism. One of her missions is to help create a world where truth is truly a tool for both justice and joy. She is also a Documentary Magazine Editorial Fellow.

END_OF_DOCUMENT_TOKEN_TO_BE_REPLACED

'The Changing Same' Takes on the Legacy of Lynching