Les Blank's Visions of Oklahoma: 'A Poem Is a Naked Person' Now on BluRay 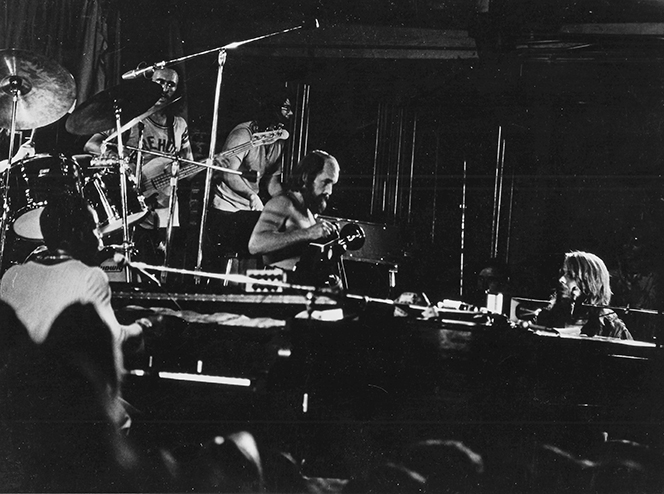 Why has A Poem Is a Naked Person, a film Les Blank considered the greatest he ever made, remained virtually unknown and unseen, until now, over 40 years after it was completed? An answer to this question can be found in the newly restored, Criterion-released Blu-Ray. (The film had a brief theatrical run last fall through Janus Films.)

It is clear that such a project would never have happened if it were not for the persistence and memory of Harrod Blank, Les Blank's son. As a young boy, tagging along with his filmmaker dad in the backwaters of 1970s Oklahoma, Harrod drew admiring portraits of musician Leon Russell, the intended subject of his father's film. It was the year following the release of Mad Dogs and Englishmen, a classic concert film starring Joe Cocker and Russell, who at that time was at the peak of his fame. Russell was an accomplished pianist, session musician and star performer who was in the process of building a top-notch studio and music compound 90 minutes outside of Tulsa when he and his partner at the time, Denny Cordell, commissioned Blank to make what they may have envisioned as a biopic, with Russell at the center. 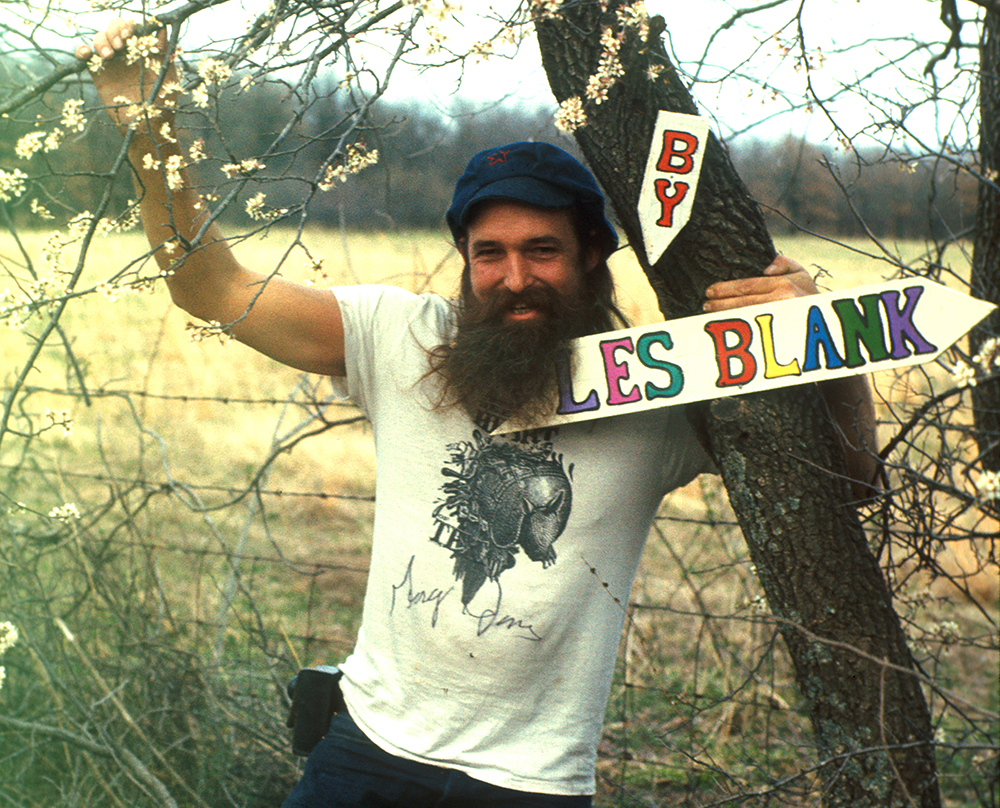 Blank, then an emerging independent filmmaker, had just finished shooting two other films when he was approached by Cordell to make the film on Russell. Blank asked if he could use the facilities provided by Russell's studio to edit his own two projects, Dry Wood and Hot Pepper, while simultaneously working on their film. They agreed, so he, along with his producing partner, Maureen Gosling, settled in for what became a two-year stay. Hanging out in Oklahoma to make a film about a musician whom Blank did not know seemed like a curious challenge. Perhaps it was this, along with the fact that Russell was often unavailable, that led the filmmaker to explore the world surrounding Russell—to, in his own words, "look around and see what I could see."

What Blank saw, he captured on 16mm film, all sun-soaked and earthy: a calliope of characters including a python-owning psychedelic artist; a goose grab; a pie-eating contest; a tractor-pull; catfish "noodling"; Native American folk art; a parachute contest narrated by a glass-eater; a Texas gospel church scene; and the implosion of the former Bliss Hotel. All of this was intercut with scenes from three of Russell's concerts and a recording session. We also get a glimpse of a clean-shaven Willie Nelson and a delightful fiddler named Sweet Mary Egan.

The filmmaker tried interviewing his subject, some of which is captured off-camera in the film, but when it was clear that Blank managed to push most, if not all, of Russell's buttons, the musician declared, "No more interviews." It was Russell who came up with the title of the film, A Poem Is a Naked Person, but when he saw the final cut, he felt the film was "more about Les than about me" and since he had paid for it, he decided to have it buried. To Russell's credit, he kept control of all the filmed material "because he thought it might be valuable for the future." Little did he realize at the time, the future for this film was more than 40 years away.

Blank retained a copy of the film, and a loophole in his contract with Russell permitted limited, private, nonprofit screenings as long as the filmmaker was present. It was following a rare retrospective screening in 1979 at the Museum of Modern Art in New York that Village Voice critic Robert Christgau declared the film "an arty horror movie of a documentary." This was no doubt in response to a mesmerizing but awful scene of the aforementioned python eating a still-squirming baby chick, along with scenes of a kid having very bad acid trip, and the glass-chomper as the camera cuts away just when we begin to wonder, "Where's the blood?" 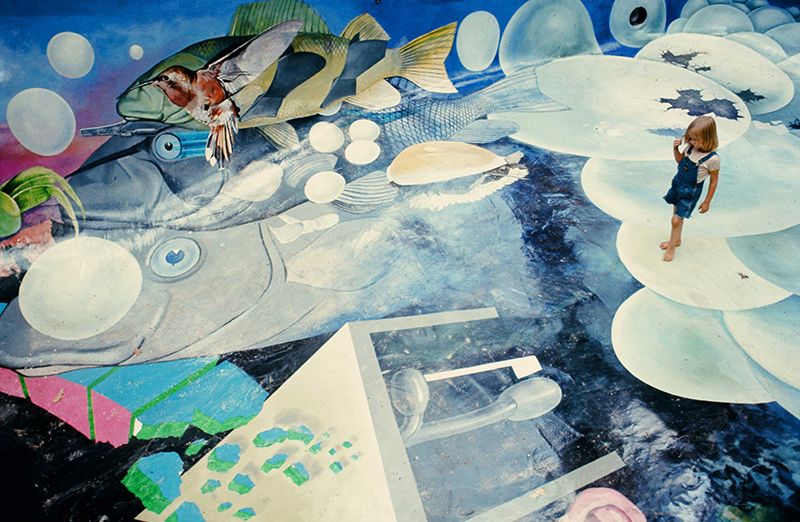 Having known Les Blank and being familiar with his work, I found this film almost otherworldly, not only because of the odd assortment of characters but also its ravishing color and atmosphere. Like Alice in Wonderland, A Poem Is a Naked Person is a moment in a time and place that now seems never to have existed. His other films, by comparison, are more "documentary," a term Blank did not welcome when applied to his own work. He thought of his films more as "lyrical poems," and this one clearly fits that description.

In one of the most informative "extras" included on this disc, a white-haired Leon Russell and the now adult Harrod Blank have a conversation. It is clear that they have a mutual admiration and respect for each other, and when asked why he agreed, after all these years, to release this film now, he glances toward Blank and says "Harrod doesn't bullshit." It was during this conversation that I became charmed by the aging, still-bearded curmudgeon. He is modest and reflective, and he has a sly wit that was barely evident in the film. Back in 1972, he was a rock star, prancing around the stage, being mobbed by adoring fans, all of whom wanted a piece of him. He had started his own record company, Shelter Films, along with the visionary, commune-like musicians' compound he was building in rural Oklahoma. There is something of the Zen philosopher about him when in response to a question from Harrod, he states, "My hobby is silence…When working on other people's records, I keep my mouth shut and just play the piano." 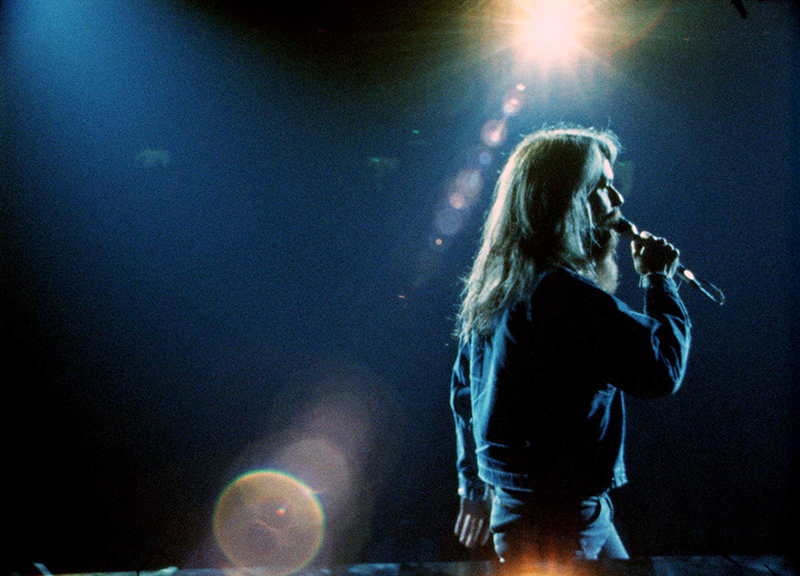 A new documentary produced by Kim Hendrickson, A Film's Forty-Year Journey: The Making of "A Poem is a Naked Person," features interviews with Harrod Blank, assistant editor and sound recordist Maureen Gosling, and artist Jim Franklin, who also appears in the film. Here we get a very unvarnished look at Les Blank, with references to "a lot of crazy stuff" that happened to be fueled in part by his heavy drinking and cocaine use, problems he wrestled with through the mid-1980s. Les was also an avid swimmer and he loved water; throughout the film, images of sunlight play across the murky river dance at intervals, reflecting the constant forward motion that is the life force of A Poem Is a Naked Person.

In 2013, when Les was diagnosed with cancer, he requested a screening of A Poem Is a Naked Person. It was to be held in February at Pixar Studios in Northern California. To comply with his contract, the screening could be attended only by family and invited friends. He agreed to do a Q&A, which was videotaped. Harrod took this opportunity to invite Russell, not knowing if he'd be willing to participate. Russell did attend the screening and while he notes, "Mr. Blank and I had different ideas about style," he ultimately admits, "In general, it was a very accurate, honest movie." This event was the catalyst for Russell's decision to work with Harrod on the restoration project and final release of the film. Les died six weeks after the screening.

Les Blank believed in living in the moment, and that there was nothing after death, absolutely nothing. Leon Russell lived in the moment but also had the vision to think A Poem Is a Naked Person might have a future. It was this vision, combined with Harrod Blank's tenacity and hard work (it was no easy task clearing all the music rights), and Criterion's mandate to restore and preserve the best that cinema arts can offer that did indeed prove Les Blank wrong. There is life after death, and it goes on in the creative work we leave behind, as long as there is an audience to see it.

END_OF_DOCUMENT_TOKEN_TO_BE_REPLACED

In Les Blank's Own Words...