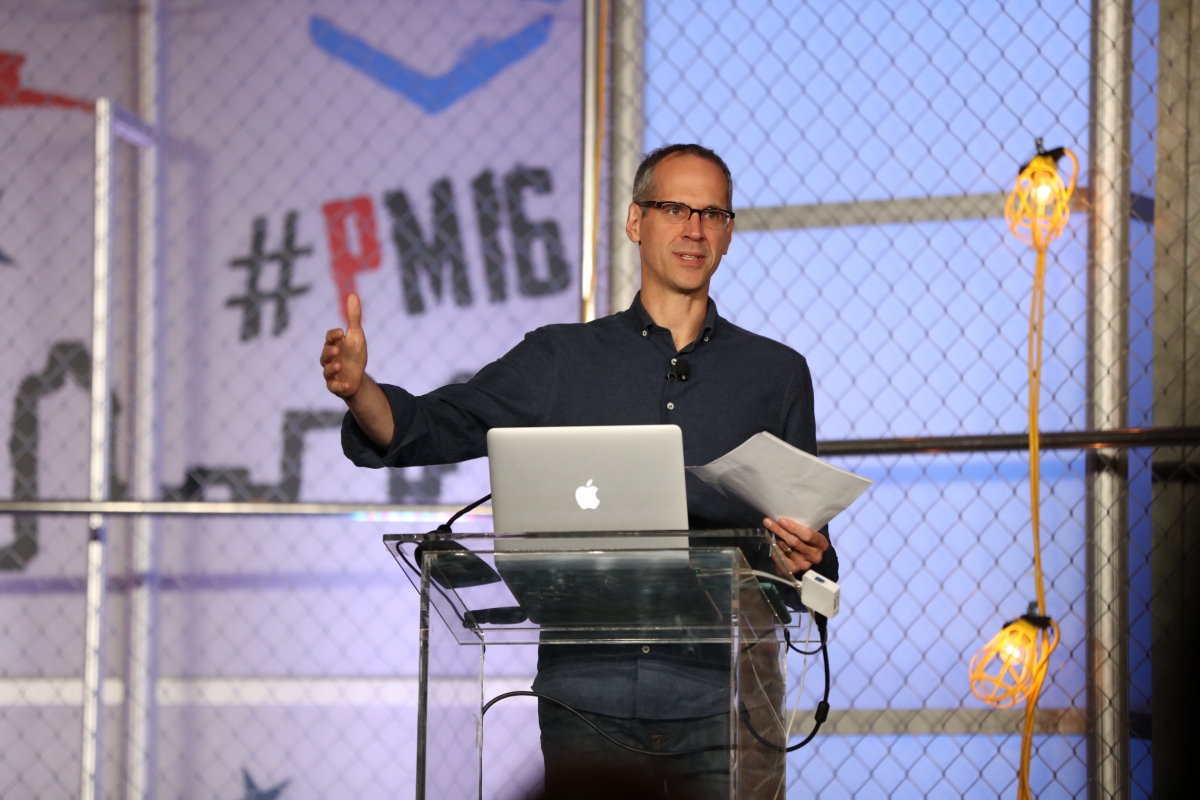 This past summer, the 3rd annual Podcast Movement Conference was held at the Hyatt Regency in Chicago. Gathered were podcasters from all kinds of backgrounds and levels of podcasting expertise, from novice to professional. As a nonfiction media-maker, film professor and public radio devotee, I've been keeping tabs on the upsurge in podcasts. And I've been giving a lot of thought to the crossover between documentary filmmaking and audio storytelling. When my summer plans unexpectedly changed and I was unable to attend in person, I took advantage of the Virtual Ticket: access to every keynote speech and breakout session (82 sessions in total).

The Podcast Movement Conference was founded in 2014 by Dan Franks, out of a need to convene about the burgeoning world of podcasting. "As media creators we had an online relationship but no central place to get together and collaborate in ways you only can do in person," Franks explains. "The closest thing was blogging conferences that had a podcast section, and although there were more attendees who were podcasters, there wasn't really [much of] anything for us."

While podcasts are all the rage now, back in 2014, podcasting was in a different place. For the previous decade, podcasts were primarily public radio shows that you could listen to on demand through an RSS feed. The podcast market grew and there were pockets of people listening to - and making - podcasts, but it hadn't exactly gone mainstream.

Then came Serial, the 2014 spinoff of This American Life. The wild success of Serial (over a million downloads the first season) caused quite a stir in the podcasting world. People now needed a place to meet, exchange ideas, move the craft forward and discuss the marketplace.

Now in its third year, the Podcast Conference has grown from a few hundred the first year to over 1,500 attendees this year. A smorgasbord of topics, the conference itself consisted of several tracks including Technical, Creator, Business and Industry. And within the tracks there was a little something for everybody, as podcasts generally fall into two general categories: interview format and narrative nonfiction.

Alex Blumberg - host of StartUp, CEO/co-founder of Gimlet Media, former producer at This American Life and co-founder of NPR's Planet Money - gave an inspiring keynote speech. Most notable, perhaps, was Blumberg's observation that we're at the dawn of the second golden age of audio.

Blumberg cited the availability of "on-demand" audio, coupled with the notion that we as human beings are "wired for narrative…Audio makes great companionship; it's a one-on-one relationship." He made the case that hearing somebody's words but not seeing their face leads to greater empathy, and he noted that it's harder to lie through audio. "You can hear emotional truth because people tend to lie visually," he maintained. He ended his address with a final note about empathy: "Creating people in our mind makes it easier to empathize, and that's what makes audio so vital now. That's the power we have - to be agents of understanding, to be agents of empathy, because that's what the world needs right now."

As I sorted through the treasure trove of virtual breakout sessions (which were made available in both audio and video formats), I really got the sense the Podcast Movement Conference was touching all the bases, from the big picture of where podcasting is in 2016 and how one might go about monetizing their podcast to the nitty-gritty of how to use sound as a storytelling tool.

The Technical Track had a terrific session with Kaitlin Prest (The Heart) and Brendan Baker (Love and Radio). When they talked about the ideas and some of the techniques and tricks of the trade behind audio storytelling, I thought of sound design and using music for docs. Indeed, Prest, who is an audio engineer, described the way she thinks of sound as "cinematic." Brendan Baker sampled different music tracks for an episode of Love and Radio, illustrating how much music influences tone. 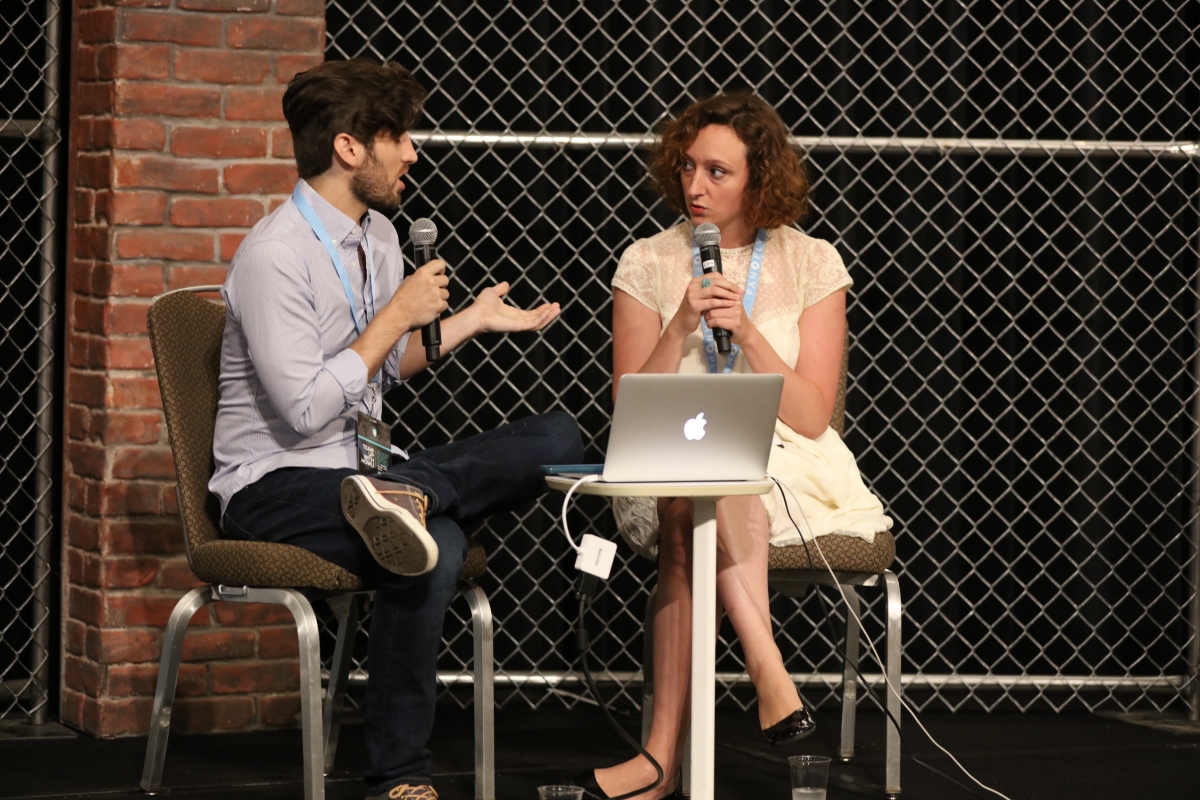 Among the cornucopia of breakout sessions were those that took place at the Radiotopia Stage. Run by the Public Radio Exchange, Radiotopia is a podcast network that includes 14 of the best story-driven podcasts out there, including 99% Invisible, The Allusionist, Criminal, and the two aforementioned podcasts The Heart and Love and Radio. Radiotopia is looking to expand their network of high-quality podcasts through a Podquest, or open call, for new show ideas. They received 1,537 entries, from which Radiotopia selected ten semi-finalists and then four finalists:

Produced by Nigel Poor, Earlonn Woods and Antwan Williams, this podcast tells "the hidden stories of life behind bars," says Poor, a photography professor at California State University Sacramento; Woods and Williams are both inmates at San Quentin State Prison. According to Poor, his team wants to "re-create place through sound." Some of the hidden stories they want to tell include "Pets in Prison," "Cooking in Prison" and "Prison Fashion."

Produced by Vivian Lee, this podcast is a show about "bad guys." A former television producer, Lee was attracted to podcasting because of the storytelling. "Every episode is going to cover either a historical figure, someone from pop culture, or fiction that has been vilified," says Lee. "The show wants to give you [the audience] a different way to look at these vilified characters, including what happened and why were they vilified."

Produced by Jericho Saria and Hadrian Santos. A former Jeopardy! contestant, Jericho Saria was confused about the difference between one word and another while preparing for his appearance on the game show. From there the idea grew into "information doppelgangers" - that is, things you always confuse with something else - The Difference Between podcast will explore what makes these "things" truly unique.

Produced by Italy-based radio producer/sound designer Jonathan Zenti, this is the sole European finalist. Meat is about how people live in their body - or more specifically, the lives people live because of their body. Zenti says sound design is essential, and he will integrate sounds that come out of the interviewees' words, creating vérité audio scenes. Some of the podcast stories Zenti is working on are: A man who decided to live naked (but in order to get the interview Zenti also had to be naked); a girl in Thailand during the 2004 Tsunami who now lives with a fungus in her knee; and an autobiographical episode about what happens when one goes on a diet.

The finalists are at work on three episodes, due in October. The winner(s) will join Radiotopia's network.

The Monetization and Marketing Tracks

The Monetization and Marketing tracks featured sessions such as "How Podcast Monetization Really Works," "Scaling Your Podcast into a Business," "The Economics of Podcasting" and "How Podcasting Became Content Marketing." All good information, but the reality is, there is no magic formula for monetizing a podcast. Like many working in documentary, it's hard to sustain a career, and it's often a labor of love. But at the same time, it's easier to begin a podcast than a film. "The barrier to entry to podcasting is much lower than documentary filmmaking," says Thom Powers, programmer at the Toronto International Film Festival and founder of DOC NYC and the Stranger then Fiction Screening series.

Powers attended the Podcast Movement Conference because of his weekly podcast, Pure Nonfiction, which includes interviews with documentary filmmakers, usually pegged to a new film. Powers likens the podcast to dinner with filmmakers: "A joy for me in doing these [podcasts] is that I have had these kinds of conversations with filmmakers privately over dinner in the past 11 years since I've been a film festival programmer, and when I look back I'm sorry they haven't been recorded for me to be able to share with more people. This allows me to do that."

When I asked Powers why doc filmmakers should be paying attention to podcasts, he offered up the following observations:

"I spent ten years as a documentary filmmaker making films for HBO and PBS," Powers explains. "Now I have such a sense of relief when I go off to do a podcast interview that 90 percent of the logistical things I used to worry about doing a film interview don't matter: lighting, location releases, extra equipment, extra people, batteries…It's a much more lightweight operation."

END_OF_DOCUMENT_TOKEN_TO_BE_REPLACED

The Broadband Generation: The Revolution Will Be Digitized, Webcast, Streamed, Vlogged, Podcast...