The 'Zoo' Story: When a Horse Is More Than a Horse 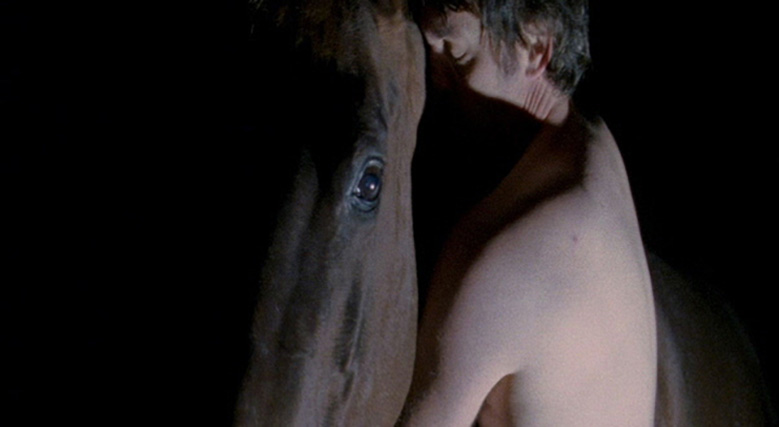 On July 2, 2005, in rural Washington State, a man was dropped off at the hospital, suffering from internal bleeding and a perforated colon. It turned out that the man had had sex with a horse, and was part of a group of men who would meet regularly for intimate sessions with the horses they loved. The Seattle Times' report on this story was the most read story in that paper's history.

One can take the easy approach to this story--make a lurid, sensational doc about a lurid, sensational tale. But Seattle-based filmmaker Robinson Devor opted to seek out the menthe zoophiles, or "zoos," as they called themselvesand coax out their side of the story. We don't hear from attorneys, cops or psychologists, and archival footage is kept at a minimum. And, of course, few of the men agreed to participate, and only one agreed to appear on camera, in re-enactments.

Zoo opens in selected theaters in New York on April 25 and in Los Angeles on May 4; THINKFilm is distributing the film. We caught up with Devor via e-mail as he was traveling, to talk about the challenges he faced in making Zoo.

IDA: When you first heard about this story, what was your reaction?

Robinson Devore: I was as amused and outraged as everyone else. It took several weeks for impressions to shift, and the jokes that I was hearing began a bit too easy. I wondered if anyone would like to die in the act of doing something less noble, and whether one could be resuscitated in the community after death.

IDA: What inspired you to make the film?

RD: I want to keep making films in the Northwest, and this was a subject that seemed ideal for myself and my writer, Charles Mudede, to tackle. There was an opportunity to meld the sordid with the beautiful, harsh facts with the unknowable.

IDA: Given that your last two films--The Woman Chaser and Police Beat--were features, did you initially consider making a feature based on the Zoo story?

RD: Yes. We were fearful of rights and participation, etc.

IDA: What made you decide to make a documentary about this story?

RD: Once we conducted an audio interview with Jenny Edwards, the horse rescuer from Hope for Horses, we started to sense a real opportunity for a unique doc that had all voiceover and no talking heads.

IDA: What documentary filmmakers have served as inspirations to you? What is it about their sensibilities that have inspired you?

RD: [Werner] Herzog is the master, though this film does not feel at all like his work, except perhaps in the magnificent obsessions of some of the zoos themselves. Then add a touch of Robert Aldrich.

IDA: In taking on a very difficult subject that is somewhat outside the limits of general understanding and morality, you took some interesting tacks--you, your cinematographer Sean Kirby and your composer Paul Moore (along with Gustav Holst) created a visual landscape and aural soundscape to recontextualize the story, thereby minimizing its tabloidy luridness. Let's talk first about the look of the film--you said in a post-screening Q&A at Sundance that you were aiming for a "paradise lost."

RD: One might call it "pastoral noir." It is a world of secret meetings in the shadows, of decent people who are wronged and doomed to fail.

IDA: Regarding the music, talk about the conversations you and Paul Moore had about creating a soundscape that would convey what you were hoping to achieve with the film.

RD: Paul is a genius. I could never express in words what he delivered to us in dark, exotic bunches. I suppose we wanted to capture the hope, the tension and almost science-fiction quality inherent in man merging with animals.

IDA: Another strategy you carried out was purposely avoiding the participation of pundits, psychologists, psychiatrists, journalists, etc. Yet you do interview the actor who plays the cop who arrested one of the zoos. What was your intention here?

RD: I could never say as well what [the actor] said--that a human being has died and let's not forget that. That he had family and friends who loved him. In our aesthetic approach, there was no way to get at such a thing directly. We originally wanted to have our actors talk about what kind of tragedies they themselves had encountered in the human community--sexual abuse, murder, etc.--and contrast that to the possibly harmless interaction their characters had with animals. A reminder of hypocrisy.

RD: I had a three-to-ten-month e-mail correspondence with these gentleman, and it took a great deal of insistence that I would feature their stories and not those who condemned them. After Coyote interacted with us, he convinced the Horseman, and finally the Horseman convinced H. I wanted [their participation] badly and they could sense how much it meant to me, as a filmmaker, and I suppose they grew to trust, to their sheer disbelief, that I would make a film that was very sympathetic to them.

IDA: Similar question regarding Jenny Edwards: Knowing how she felt about the zoos, how did you go about convincing her to participate in the film?

RD: Jenny read Charles Mudede's column and contacted him directly. Charles sent me out to do the dirty work. But seriously, Jenny wanted to spread the word about her organization and the challenges it faces in rescuing horses. I also knew I had to be fair to Jenny, and to be fair, she probably didn't know that it would be just her versus the zoos.

IDA: You've taken Zoo to Sundance and SXSW, and you just had a screening in Seattle. How have audiences reacted? What were your expectations, and what has been most surprising or unexpected about their reactions?

RD: We set out to do something a little different, and to create an experience that would be mysterious and enlightening and perhaps even uplifting. The critics have been very positive, though I understand some need for more basic reporting. And I wouldn't say we were able to create a kind of reconciliation--far too lofty of a goal but something I'd hoped to door that we were able to portray Mr. Hands [the man who was killed] in any kind of complex way, but that's okay. The film was about the subjects who participated.

RD: It stayed pretty much the same. We created a seven-minute teaser, and those sequences remain in the film almost to the letter.

Thomas White is editor of Documentary.

END_OF_DOCUMENT_TOKEN_TO_BE_REPLACED

The Challenges of Filming 'The Loneliest Whale' Documentary

Andrea Arnold's 'Cow': The Searing Romance and Reality of Nature