Winners of Us All 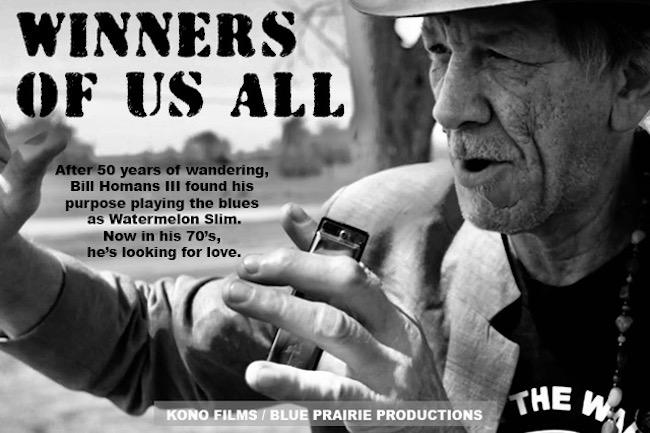 As a consummate underdog, William P. Homans III has endured the realities of war, had success that turned to failure, had joy that ended in pain, love followed by loneliness. But after 50 years of wandering Bill Homans III found his purpose in the blues. Now in his 70’s he’s looking for love.

Winners of Us All will feature Bill  Homans III aka Watermelon Slim a legendary bluesman with a master’s degree in history, a philosopher, an ex-MENSA member, truck driver, political activist, speaker of four languages and a gay bluesman looking for love. His journey has been a search for meaning through his music, his art, and life itself. But now, in his seventies, his thoughts drift toward the prospect of his mortality and his desire for someone to love and be loved.

Bill Homans first heard the blues in Asheville, N.C., in 1954 at the age of five, when Ms Beulah Huggins, a domestic in his parents’ employ, would sing John Lee Hooker’s songs around the house. While no one can measure the extent to which our earliest teachers influence us, it would seem that Ms Huggins, an African American, had imparted a spiritual gift which transcended race to the youth who would later become Watermelon Slim.     This film will explore Watermelon Slim’s life as a prolific songwriter and performer. Through his own words we will reveal his character, his motivation and the challenges he’s faced as a gay blues musician. As his songwriting matures, his interest points him into deeper personal territory creating a rare window into the life of a totally unique bluesman.