Doc Star of the Month: Valerie Taylor, 'Playing with Sharks' 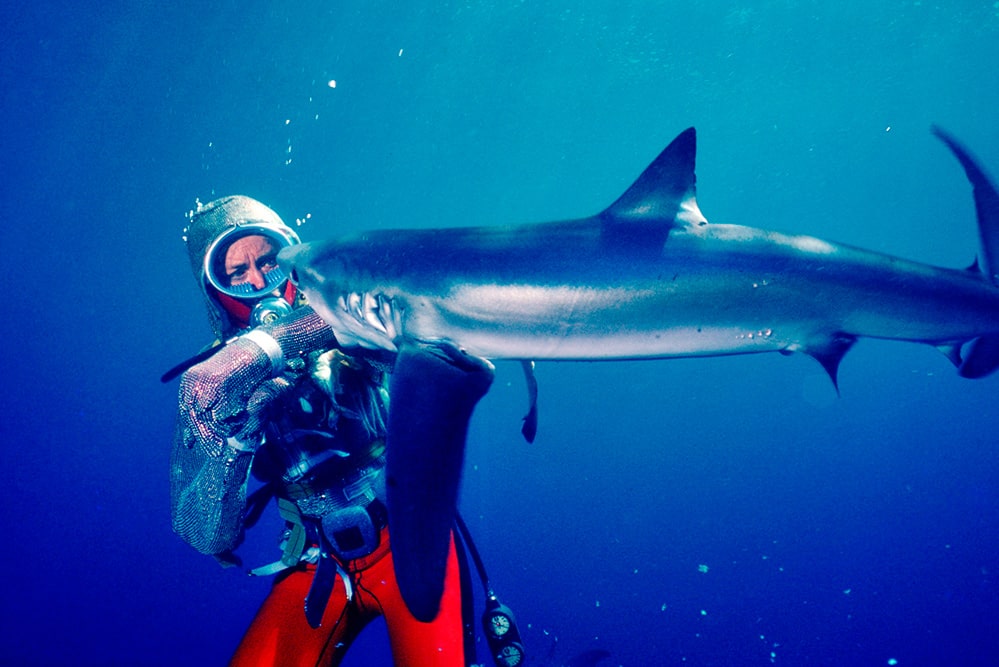 Valerie Taylor has lived a life rife with unintended consequences, contradictions and double-edged swords. A pioneer in both shark research and underwater filmmaking, the champion spearfisher-turned-apex-predator-protector often made headlines as much for her bikinis and “Bond girl” looks as she did for her fearless talent. Which allowed the intrepid Australian to bring more attention to her emergence as a sort of Jane Goodall of the seas.

Taylor likewise became a media sensation—along with her husband and lifelong collaborator, Ron—for having created the work that inspired both the book Jaws and the 1975 Spielberg film for which she and Ron were brought on to shoot the live shark scenes. That summer blockbuster subsequently sparked a nationwide panic over great white sharks, as well as a near-genocidal slaughter of the species, forcing the conservationist, now an octogenarian who still dives, on a shark redemption crusade that she continues to lead.

Luckily for Documentary, the indefatigable star of Sally Aitken’s Playing with Sharks (acquired by National Geographic at this year’s Sundance and premiering July 23 on Disney+) took time out of the water and away from her advocacy activities to graciously serve as July's Doc Star of the Month.

DOCUMENTARY: You’ve known the doc’s producer, Bettina Dalton, for decades. Did you immediately sign on to the film, or did you have some reservations? What ultimately sold you on the project?

VALERIE TAYLOR: I was delighted when Bettina said she thought a film about my work with sharks could make a good one-hour documentary. There were two other filmmakers also interested in a film about my life. But I had worked with Bettina in the past, and she knew Ron's work, and had already produced a first-class series using Ron and myself.

D: As someone who’s spent most of her life both behind and in front of the camera, did participating in this doc feel familiar? Was it a wholly different experience?

VT: It was a very different experience, especially when filming new material. At times I was desperate to take over the directing, but I held my tongue most of the time and went with the flow. The film is a huge success, so I let the delightful and very talented Sally have her way.

D: Your “Bond girl” looks brought attention to your and your husband Ron's groundbreaking work—which in turn was taken perhaps less seriously than that of male contemporaries like Jacques Cousteau (whom you actually influenced). How do you feel about this misogynistic dilemma—one hardly unique to you and your field? You’re undoubtedly a pioneer, but do you consider yourself a feminist as well?

VT: No, I don't consider myself a feminist—and I never influenced Jacques Cousteau that I know of. I never had any problems getting my story to the general public. It worked like this: Get a good story. Always tell the truth. Get good imagery. And go on TV and speak to the general public. Sometimes the opposition will attack—but they always lie and then you have got them. Always get a good news story.

D: Jaws was both a turning point in your career and a Pandora’s Box unleashed upon the shark world. Looking back, are there things Spielberg or the studio could have done differently to have prevented the demonization of an entire species? Are there lessons, besides don’t cast animals as villains, to be learned for filmmakers to behave more responsibly?

VT: There was really nothing that Spielberg or the studio could have done. It was a fictitious story about a fictitious shark. Nobody associated with the film had any idea that the general public would take it so seriously. We were astounded.

The filmmakers didn't behave irresponsibly. You don't expect to see King Kong on the top of the Empire State building when you go to New York—so why do people think Jaws is out there just off the beach waiting to grab them? Universal sent Ron and myself around the States doing every talk show, telling the viewers that sharks don't behave that way. But it seems the general public wants to have a villain. Ten times more people die on the road in accidents every day than they die from a shark bite in a year.

D: Finally, I’m very curious to hear your thoughts on the ethics of engaging with wildlife on film, especially in light of the backlash to this year’s Oscar winner, My Octopus Teacher—and specifically that protagonist/documentarian’s presumption that his relationship with a deep-sea creature was reciprocal or even consensual. It makes me think of the debate surrounding explorers interacting with uncontacted tribes. Shouldn’t the right to be left alone be extended to the entire animal kingdom as well? How do you personally square this?

VT: Octopuses are very intelligent. My brother and I had a pet octopus; his name was Occy. My parents had a waterfront home and one day we were down the front when we saw an octopus reaching out of the water, trying to catch a crab that had climbed up on the oysters to escape. I reached down and pushed the crab towards the water and the octopus grabbed it. From that day on, whenever we were down the front, Occy would appear and reach up towards us. I would always find him a crab. If I walked along the waterfront, Occy followed, begging for a crab every time I looked at him. My second octopus friend had an even more remarkable story, and it had nothing to do with crabs but with building a house.

Sharks are like a pack of dogs, all different personalities. But most, like dogs, will react to a treat, which is generally a small piece of fish. Give a free-swimming shark a couple of treats and you can teach it to do a simple trick. Nursey, a large tawny shark, became a very special friend over a three-day period. On every dive she turned up and followed me around, begging for a treat just like a dog. On the second day, she would tow me around while I hung onto her fin.

We'd been doing shark-repeller tests with some scientists from the US Navy. They didn't want the big tawny around, as she ate all the baits. The Navy were only interested in potentially dangerous sharks. My job was to keep Nursey away from the experimental area, which I did by offering her a treat. I have found most marine animals, provided I am slow and calm, react to my presence in a similar way that a land animal does. Kookaburras come to my balcony every day for a handout, possums every night for a piece of apple. Like wild animals in the ocean, these wild land animals accept my presence because I give them food—not much but enough to keep them fed in a city like Sydney, where there is little forest left.

END_OF_DOCUMENT_TOKEN_TO_BE_REPLACED

Doc Star of the Month: Walter Burrell, 'The Gospel of Eureka'

Doc Star of the Month: Barbora Kysilkova, 'The Painter and the Thief'

Doc Star of the Month: Yusuf Abdurahman, 'Accept the Call'