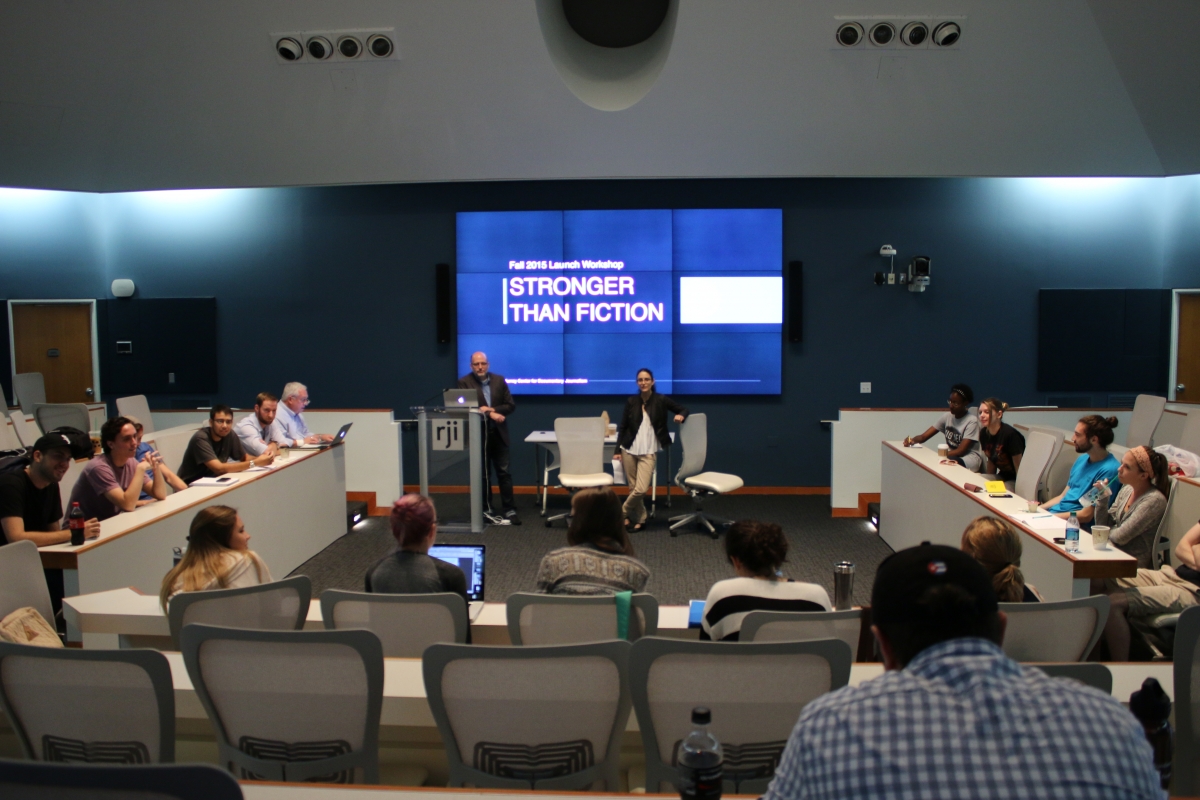 Racial unrest at the University of Missouri in Columbia in fall 2015 led to national headlines, a threatened boycott by the football team and the resignation of the system president. It also immersed the inaugural class of the Jonathan B. Murray Center for Documentary Journalism in the power and potential of long-form journalism.

"It was a banner year," says Murray, founder of LA-based Bunim/Murray Productions. "Students convinced the Black Lives Matter group on campus to participate in cinema vérité on what was going on there. I was sitting in the audience when their documentary played at the True/False Film Festival, and it was exciting. Spike Lee became aware of it, came to town to see it, conducted a master class and licensed some of the material for a 30 for 30 program for ESPN."

Murray, the acknowledged father of reality television, having created the MTV series The Real World, is proud of his alma mater and the program he funded. Walter Williams started the University of Missouri School of Journalism - the world's first - in 1908. It remains the largest (and, its graduates would argue, the best) journalism school in the nation. And now, it is breaking new ground at the intersection of documentary filmmaking and traditional journalism.

"Documentary programs usually are in Arts and Sciences, but we are staking out a new spot to do it from the Journalism School," says Stacey Woelfel, associate professor and director of the center. "People may look at news headlines for a minute and see little bits of the news. The natural reaction is to sink their teeth into something more in depth. That is benefiting long-form newspaper and magazines, and documentaries. People want to sit down and spend time with a story."

Ultimate reality show
It sounds like a cliché, but the melding of documentary filmmaking and journalism came about because of the right people in the right place at the right time. That begins with Murray, who arrived from upstate New York in the mid-1970s to study broadcast journalism.

"I chose Mizzou because they own a network-affiliated station with a news operation," he explains. "I knew that by going there, I would be able to say to potential employers that that I had produced a newscast and put together news stories. I went there sight unseen and never looked back."

After launching The Real World in 1992, Murray has produced dozens of television's most successful unscripted programs. Bunim/Murray started BMP Films in 2007 and sold the documentary Autism: The Musical to HBO. Several years ago, Murray began brainstorming ideas to help his alma mater while also contributing to the long-term viability of nonfiction film.

"I hire 20 or 30 kids out of college every year," he notes. "They have degrees in mass communications, journalism, English or even philosophy. I look at the individual, not the degree. What has been missing is the ability to tell a long-form story. Each of our reality shows is either 44 or 22 minutes long. I wanted to find the ability to do long-form storytelling."

As it turns out, Woelfel was having the same thoughts. He has taught broadcast journalism at Missouri for 30 years, including 24 years as news director at KOMU-TV, where Murray got his start.

"We had it on the radar screen on the broadcast side for a long time," he says. "Some students would come in and sign up to be in broadcasting, but they wanted to make documentaries, not be on TV. We thought, 'Wouldn't it be great if we had a documentary journalism program so they would not have to be on TV?' But money is always an issue in public universities, and we didn't have funds to start a program and hire faculty."

The other piece of the puzzle was the local True/False Film Festival, which has become one of the most acclaimed nonfiction festivals in the world since its inception in 2003.

"I have been an admirer of reality television and the work Jon has done for a long time," says David Wilson, who co-founded the festival with Paul Sturtz. "We don't see reality TV as the enemy of documentaries. It has helped create a generation of young people who are open to nonfiction.

"We didn't know Jon was a Missouri journalism graduate and we learned he was coming to Columbia to check things out," Wilson continues. “We arranged to have coffee with him and told him about True/False. He came back, checked it out and really liked it."

"We had several planning sessions with David, Paul and several journalism professors. I said, 'How much will it cost to start in two years?' It was more than the figure I had in mind. They said it would take more time and additional fundraising to reach the goal, so I increased my investment."

Roll film
Murray contributed $6.7 million, and the first academic year started in fall 2015. The program is based on what is called "the Missouri method," which combines well-rounded academics with hands-on experience.

"You are not just learning a trade, but becoming an educated individual at the same time," Murray maintains. "You have a head start on other job applicants, because you have worked at KOMU-TV, KBIA radio or the Columbia Missourian newspaper. I was able to show employers that I had produced the 10 p.m. news for six or seven weeks."

As Woelfel explains, he teaches the journalism side and filmmaker-in-chief Robert Greene (Kate Plays Christine; Actress) handles the filmmaking side.

"I have had four films in True/False, and I love Columbia," Greene exclaims. "I actually told my wife that it was somewhere that I would love to live and teach. Paul Sturtz gave me a tip a year ahead of time that this positon may come open. It's exciting for me to be involved with the School of Journalism. I am like an art guy teaching in a science school, and it's an awesome place for me to be."

In addition to Spike Lee, some of the most successful filmmakers in the industry participated as visiting artists last year, including Rachel Boynton, Judith Helfand, Bill Ross and Amanda Rose Wilder. 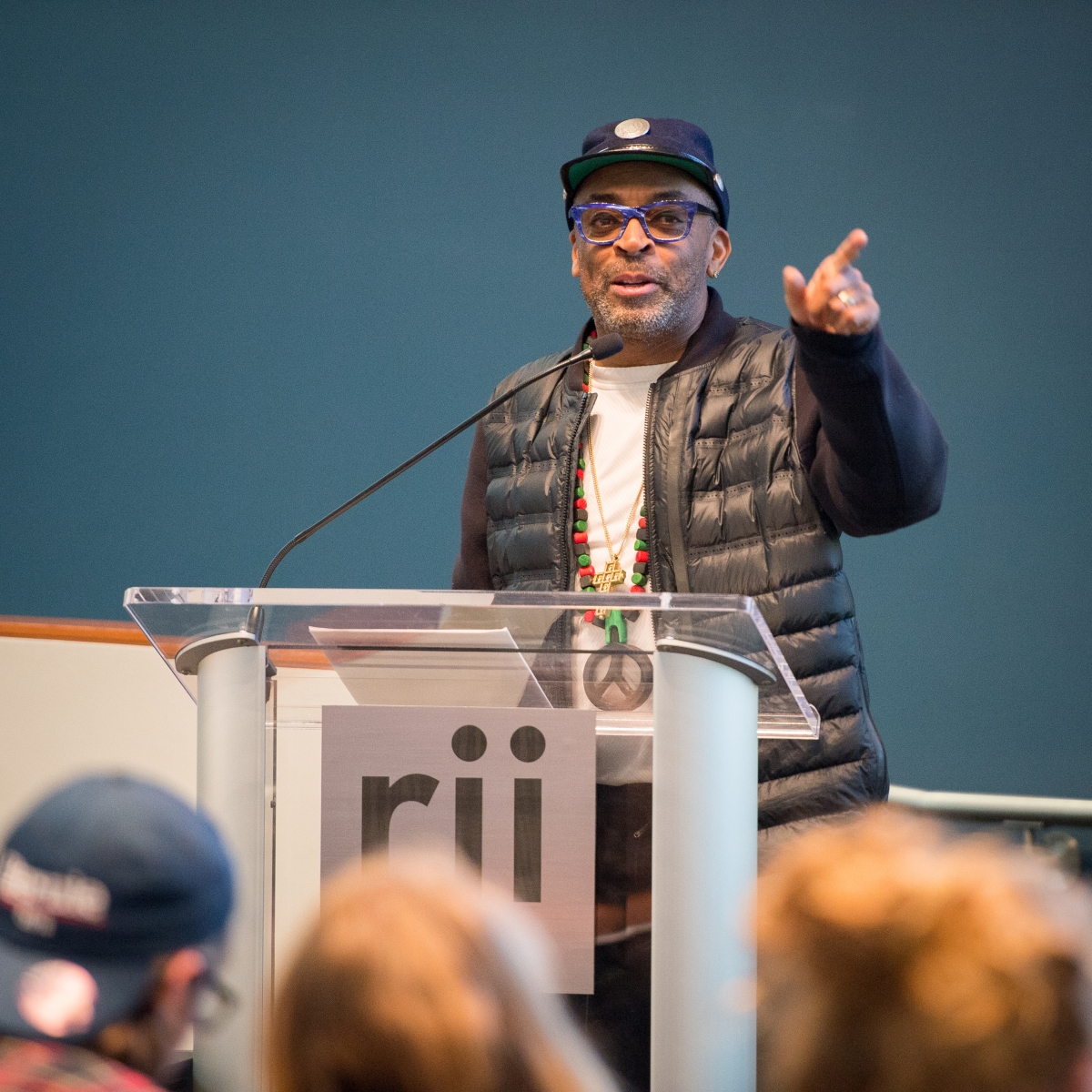 "We planned early on to use part of our resources to bring in visiting artists," Woelfel explains. "A lot of them are contacts that Robert has. We want to expose our students to important people in the industry who are out there making documentaries. This also lets the documentary world know about us. We try to be out there in important places, such as the Cinema Eye Awards and the Sundance Film Festival."

It would be difficult to overstate the importance of True/False to the program's success, Woelfel adds. "I am always quick to say that we would not be here without the True/False Festival," he said. "True/False put Columbia on the documentary map. David Wilson has been our godfather in many ways. We began having brainstorming meetings several years ago about how to structure a program and what it would cost. It's not a happy accident; it's in our DNA. We had a student film in True/False last year and expect more as students finish their senior projects."

Wilson agrees. "It's really a non-stop synergy these days," he says. "The students are volunteers and come to the festival. The program is a huge supporter of the festival."

The program, in turn, feeds off the festival. "The way I look at it, we are importing the True/False aesthetic into the journalism school," Greene notes. "It's all about using film to push and blur boundaries."

Critical acclaim
Murray could not be happier with the way the first year went.

"Admission to the second class this year was very competitive," he says. "Robert Greene got a film into Sundance, brought in students and placed kids in summer internship programs. Stacey is the unsung hero, an excellent professor and administrator. Current student projects are dealing with important issues. I can't wait to see them at an all-day festival next May."

As Wilson puts it, "The program has been all anyone could have hoped for." He expects the industry as a whole to benefit as students graduate and begin to contribute.

"I think we are seeing a truly new era of journalism," he maintains. "We are getting away from the 'voice of God' narration. Primary sources still rule, but viewers also want stories to help triangulate a topic."

In many ways, the discipline of documentary journalism is a blank slate.

"Documentary is such a big idea, and it doesn't mean just one thing," Greene notes. "It can be short work like Field of Vison, which is a great example of using film to expand what journalism means. The struggle will be how to make artful, relevant documentaries in a journalistic context."

Murray is bullish on the future.

Alan Goforth is a freelance journalist, author and aspiring screenwriter in Lee's Summit, Mo. He is a graduate of the University of Missouri School of Journalism.