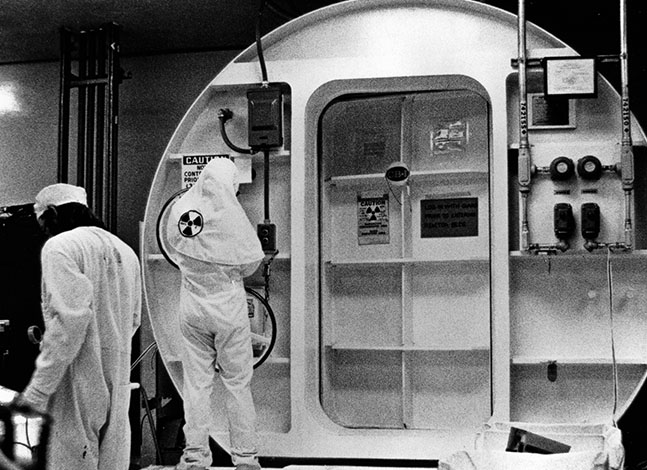 Growing up in Broomfield, Colorado, I vaguely knew that the nearby nuclear weapons plant Rocky Flats existed. As a family, we sometimes worried about drinking contaminated water and would occasionally even glimpse a protest. But radiation is an abstract notion for kids. As someone says in the 1982 film Dark Circle, “You can’t see it, you can’t feel it.” Dark Circle, directed by Judy Irving, Christopher Beaver and Ruth Landy, is one of the most poignant films about the military industrial complex ever made.

Sequences include interviews with a man who survived Nagasaki, footage of hideous experiments on live pigs to determine the effect of a nuclear blast on skin, and soldiers intentionally exposed to radiation. But the film is most focused when it spends time in the subdivisions that multiplied along the Colorado Front Range from the 1960s through the 1980s. These communities were often built on contaminated soil, and under the toxic wind created by a nuclear weapons factory only a few miles away, in Rocky Flats. Dark Circle is about where I grew up.

Seeing this film while I was young made me both horrified and thankful. Out of thin air came a tool to understand my world. Our next-door neighbor worked at Rocky Flats. One day I asked him about exposure to radiation, and he said that it had happened to him a few times. It was called “getting hot,” and it resulted in a couple of weeks paid vacation. At home, we were told Rocky Flats built “triggers” for nuclear weapons. In Dark Circle, it was clear they were building “the Bomb.” The film shows the depth of mismanagement, environmental disaster and lying that took place at Rocky Flats. The plant burned down twice, each time releasing clouds of poison into the air and landscape. Animals in the surrounding farmland were dying or being born disfigured. Workers at the plant kept getting cancer.

Dark Circle also delves into the companies who had vested interests in keeping Rocky Flats running. The filmmakers’ access is astonishing, invoking jealousy in those of us now working in an era of reflexive secrecy. They get an interview with a man whose head is badly mangled from brain surgery, and capture a press conference where an emotional spokeswoman chokes through the company line. “The area around Rocky Flats is a safe place to live,” she says. At one point the crew finds a young saleswoman excitedly talking about the benefits of "unmanned aerial drones"; at that moment it’s easy to forget that this film was shot nearly 40 years ago.

Dark Circle was so controversial that in 1985, PBS decided to yank its nationwide broadcast, calling it “one-sided.” The writer B.J. Bullert, in his 1997 book Public Television: Politics and the Battle over Documentary Film, said the decision “robbed” American audiences of the chance to hear a perspective that was unflattering to the US Government. The PBS series POV aired the film in 1989, and it won a national Emmy. Today, the film’s truths are widely recognized, and it’s clear Rockwell and the government lied regularly and then tried to bury it all in secrecy.

Eventually, after bowing to enormous pressure, Rocky Flats was made into a National Park. But considering the enormous longevity of nuclear toxicity, there is still a dark circle of death in the dirt.

Dark Circle does what great documentaries do: It shows something right in front of you not previously seen. For a kid who grew up drinking and swimming in Front Range water and playing in that Colorado dirt, it re-wrote my genetic code as a filmmaker to include a simmering anger, a deep questioning of entrenched interests and a desire to fight back.

Brian Knappenberger is an award-winning documentary writer and director whose credits include The Internet’s Own Boy: The Story of Aaron Swartz and We Are Legion: The Story of the Hacktivists. Knappenberger is currently in production on a ten-part investigative documentary series for Participant Media—slated to air in the winter of 2016—which will spotlight stories of people fighting back against institutional abuses of power.