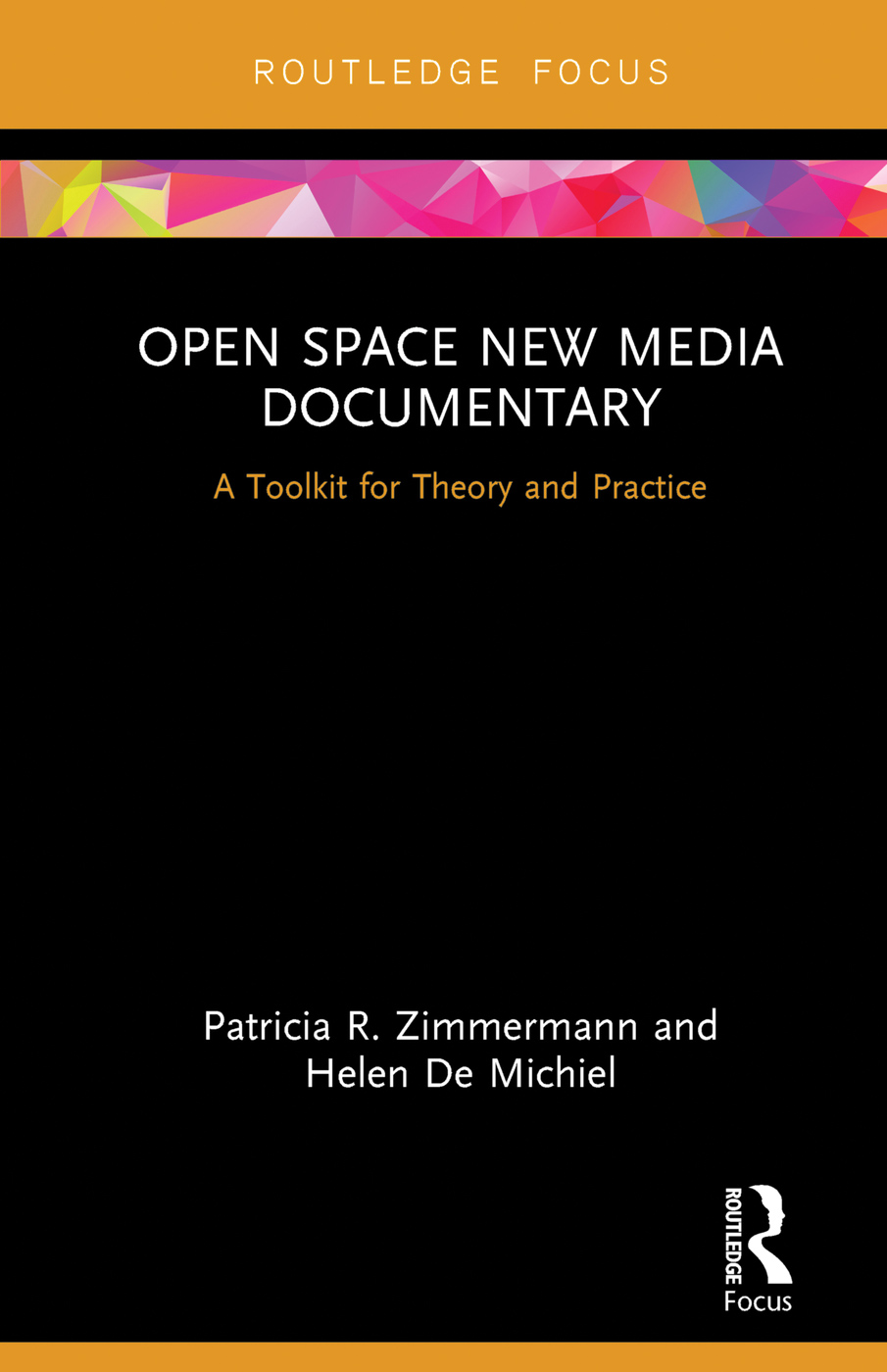 It is perhaps easiest to understand the contours of these new media practices by describing what they are not. Zimmerman and De Michiel distinguish open space new media from works produced within the documentary industry and the artisanal production spaces of contemporary galleries. The former includes feature-length films that employ character-driven narrative strategies “designed to catch the attention of funders and investors.” Even with increasingly limited opportunities for financing and distribution in the nonfiction marketplace, these works tread a well-worn creative path lined with conflict and affect, often featuring “emotionally manipulative soundtracks, gorgeous photography, larger-than-life characters, spiced-up scenes and stylized reenactments.” The latter, largely the domain of the auteur filmmaker, tends to privilege the individuality of artistic vision over community-based purpose and outcome. By contrast to these approaches, open space new media documentaries are more concerned with dialogic engagement than issues of representation, and tend to eschew top-down or vertical relationships between producer, subject and audience in favor of a more horizontal, collaborative and improvisational space that operates distinctively from the worlds of fine art and mass consumption. In open space new media, the documentarian uses accessible technological tools and becomes a community designer, with a view to convening people and stimulating discussions that are at once intentional and spontaneous around a broad range of complex, contradictory, hidden or otherwise unresolved issues.

The book offers twelve unique collaborative projects for thoughtful consideration. These projects are discussed over four chapters, each of which centers on a particular feature of open space new media: (1) Small Places, (2) Designing Encounters, (3) Polyphonic Collaborations and (4) Inviting Spaces. The projects originate in a diverse range of local and national contexts. Two are transnational in scope and reveal the possibilities for open space new media to transcend political borders. Documentaries are presented in archives, public dialogues, art books, media events, mobile media, performances, videos and websites, to name a few modalities explored.

Chapter Two examines open space new media as a practice that resides in what the authors call “small places” “Small” has several meanings, ranging from a highly personal micro-account of a large historical event to the active and intentional collection and collation of local artifacts and ephemera. Each of the three examined projects probe “the problem of how to rebuild a history by centering on a small place in the aftermath of extreme political or social trauma impacting the lives of everyday people.” In this space, documentary is refocused on everyday places, experiences and things that, collectively, stand in opposition to and disrupt unified historical discourses.

The Quipu Project (Peru/UK), for example, documents testimonies of indigenous women who underwent state-sanctioned forced sterilization in the 1990s. Stories were recorded using mobile phones in regions with no Internet access, and the resulting Web-based project connects the disparate voices of women located in different communities. The Triangle Open Fire Archive (USA) exists as online living media repository of events related to 1911 factory fire in New York City that at once acts as an active and participatory memorial for a past tragedy and raises questions about present-day tensions arising from precarious working conditions. By contrast to the linear grand narratives that dominate commercial documentaries, the projects examined in this chapter demonstrate how open space new media creates opportunities for discovery and meaning in fragmentary and nonlinear stories and objects. This idea is perhaps best exemplified in Abounaddara (Syria), a documentary project that aggregates videos and testimonials about everyday life in Syria that are centered on “small places” such as alleyways, houses or shops. The project effectively disrupts the grand narratives and “cinema of emergency” found in mainstream documentary journalism, turning the lens instead on everyday locales and situations as "productive sites of survival and memory."

Open space new media projects are often intentional and strategic. In Chapter Three, Zimmerman and De Michiel discuss the practice of documentary as “designing encounters.” The authors seek to understand what happens when conventional systems of production, distribution and exhibition are displaced, and the filmmaker acts instead as a facilitator. A simple film screening is infused with possibilities and "becomes a much larger experience, where participants break from the obligation of ordinary life to imagine individually and together how to move toward collective action.” Each of the projects explored in this chapter seek to promote dialogical collaborative engagement. Lunch Love Community (USA) prompts thinking about food justice in public schools through a series of webisodes and participatory community screenings. In Mapping Memories (Canada), young refugees use simple technologies to tell their own stories of displacement; here, the design encounter is focused on process, with each participant moving at their own pace through four stages of creation, culminating in “going public” with their story, only if and when ready. GhanaThinkTank (Transnational) examines designed encounters across transnational boundaries. The project challenges “neo-colonialist flow of ideas,” inviting participants in developing nations—communities too often represented as passive recipients of international aid—to convene and “solve problems primarily posed by people living in Western countries.” More than simply a clever thought exercise, the project uses mobile media centers and workspaces in the field to capture video, audio and still photography in the name of collaborative problem-solving. In one noteworthy example, rural farmers in Morocco advocated for a communal riad style of architecture to combat widespread social isolation in American cities, which is currently being implemented in a Detroit-area housing development, titled The American Riad Project.

Chapter Four explores “Polyphonic Collaborations” and examines how these works circumvent narrative, character-driven documentary. Zimmerman and Di Michiel examine four community-based projects, each of which engages with a large-scale political conflict or crisis from the perspectives of ordinary people. These projects include Precious Places (USA), a collaborative, community-based initiative using documentaries to “retrieve forgotten or unacknowledged public memories” in the context of gentrification in several Philadelphia neighborhoods; Babylon 13 (Ukraine), where hundreds of filmmakers involved in the 2014 Maidan Revolution in Ukraine produced micro-stories challenging the univocal coverage of the struggle for democracy within the mainstream media; EngageMedia (Indonesia/Australia), an environmental and human rights social media portal that compiles Asian Pacific regional content and ignites coalitions around the issues it exposes; and Jerusalem, We Are Here (Canada), a “collaboratively rendered virtual tour and re-mapping project” of the Katamon area of Jerusalem, where the voices of those historically expelled from the neighborhood can re-enter and share stories in a virtual space.

These projects all employ a polyphonic approach—they shift away from a single authorial vision, linear narratives and reductive structures of commercial documentary and encourage instead a multiplicity of voices in a form where they “exist autonomously within a non-hierarchical wholeness.” Zimmerman and Di Michiel are careful to point out that polyphonies are not devoid of power and conflict; indeed, a mosaic of voices and viewpoints does not always spell harmony. Yet the discord can be productive. Citing writer and activist Terry Tempest Williams, “a mosaic is a conversation between what is broken’… [s]omething broken can be reassembled in new patterns of form and line; it does not necessarily need to be fixed. A mosaic withstands disturbances.”

Zimmerman and Di Michiel explore theories of participatory arts and critical ethnography and invite inquiry and investigation of documentary forms beyond the traditional screen in Chapter Five, “Inviting Spaces.” Such spaces can be “a presentation, performance, show or screen-based combination of visual and aural elements from which viewers or visitors can make their own connections without being told what to think.” Here, documentary becomes a space for relational encounters—that is, “rather than making representations about a subject, filmmaking produces encounters based on relations that create new spaces.” For example, The Shore Line invites individuals from coastal communities around the world to contribute to an interactive online documentary about local environmental resilience in light of climate change; The Memory Project (China) invites intergenerational knowledge exchange through multimedia and dance to revise official state and historical discourse on the Chinese famine; and the Poetics of Fragility (Argentina/India/USA) exists as an “[exploration] of emotional, physical and subjective fears about bodies rendered vulnerable by climate change, economic precariousness and global authoritarianism” using a feature-length film essay, website and art book.

The book closes with a discussion of ten working principles that can meaningfully guide the creation of open space new media. Synthesizing many of the issues, theories and themes around participatory documentary that cut across the projects described in the book, these principles include circularity, collaboration, community, complexity, composting, connection, context, continuum and cost. Open Space New Media Documentary offers a highly useful guide for students of the documentary form and seasoned professionals alike. It encourages innovation and creativity in the documentary form, as well as deep reflection on the role of the artist in the communities in which they work and live.

END_OF_DOCUMENT_TOKEN_TO_BE_REPLACED

Can I Get a Witness? Images That Effect a Positive Change