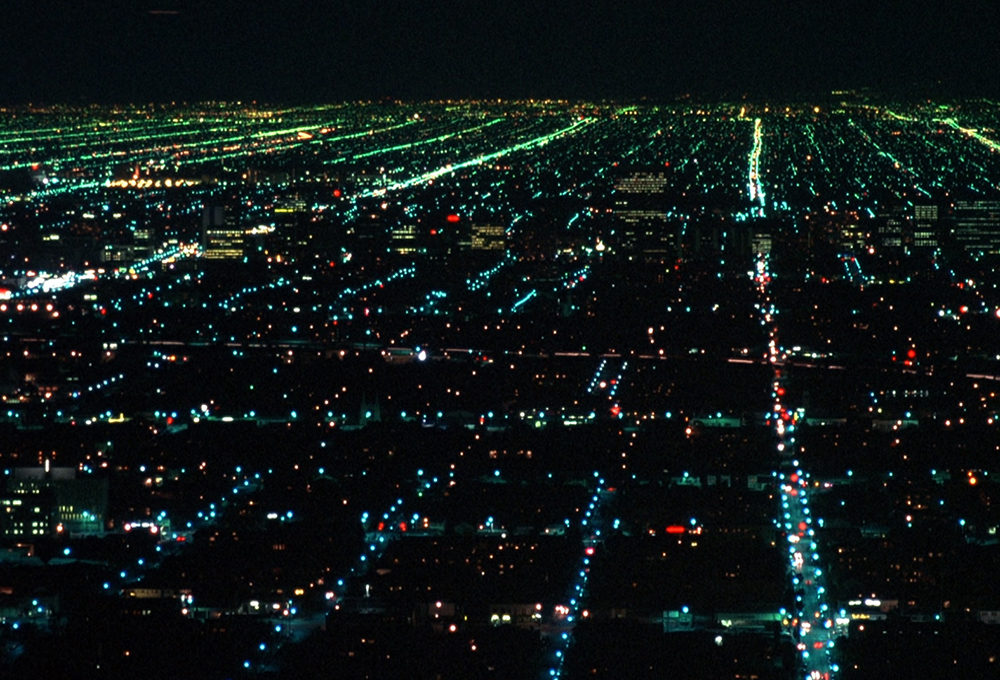 From Godfrey Reggio’s 1983 film Koyannisqatsi. Courtesy of The Criterion Collection

It's so familiar now, but at the time there had been nothing like Koyaanisqatsi. This is affirmed by Ron Fricke, cinematographer on the film, in a new interview featured in the Criterion Collection DVD and Blu-ray sets of The Qatsi Trilogy. He particularly means the time-lapse footage that it's most famous for, but there are other aspects that were new to audiences 30 years ago, additional reasons it is recognized by the Library of Congress as a landmark of American cinema. Philip Glass had never scored a movie before, for one thing. And non-verbal experimental features weren't exactly commonly shown in commercial theaters, either.

Godfrey Reggio's classic documentary was a hit in those movie theaters 30 years ago, whether because the drug culture embraced its psychedelic imagery or because even general audiences were fascinated by the magical and mysterious experience of a rolling Rorschach test, one that continues to provide viewers with diverse feelings and interpretations. For decades many have accepted Koyaanisqatsi as an environmentalist work, for instance, and Criterion has actually included an essay by Bill McKibben, a leading voice on the issue of climate change, about the prescience of the film.

That's one of a few pieces of writing printed in a booklet accompanying the trilogy sets. The other two consist of New York Times critic John Rockwell discussing Glass' contribution and Harvard professor Scott MacDonald explaining the meanings of the three films, the sequels of course being 1988's Powaqqatsi and 2002's Naqoyqatsi, with attention to some of their most striking and overt images. Between this material and the multiple interviews with Reggio, Fricke and Glass—newly produced or compiled for Criterion or recycled from previous home video releases—there is a lot of seemingly definitive discourse on what each and all of the "Qatsi" documentaries are truly about. And this could be strange for those who cherishe their ambiguity.

From Godfrey Reggio’s 1983 film Powaqqatsi. Courtesy of The Criterion Collection

In a statement apparently written by Reggio on the outdated website Koyaanisqatsi.org, the director claims there is no specific or predetermined meaning or value to the initial film, that it's a piece of art intended to provoke the audience and be viewed differently through the eyes of each beholder. What he explains of the films in the Criterion edition's supplementary features isn't really much more than elaborations of the themes he's also acknowledged for years. Yet his extensive talks on personal inspirations and outlook and the central focus of the trilogy and each installment may well draw a box around your potential for further bewilderment and wonder with these films.

To borrow a phrase he often uses regarding a theme of Koyaanisqatsi, it's the "beauty of the beast," perhaps. Courtesy of Criterion, we can become experts on works of art that there ought not be expertise on. In one of the new interviews, however, he says that he does not consider himself an artist so much as a communicator. The images on the screen are not merely gorgeous shots of landscapes and Twinkie factories and Vegas waitresses or, in the case of Naqoyqatsi, manipulated footage from actuality films and video games and television advertisements. There is a message in the montage.

From Godfrey Reggio’s 1983 film Naqoyqatsi. Courtesy of The Criterion Collection

It might be that, just as multiple images juxtaposed create a visual text, the addition of two sequels put more of a context of meaning and overall purpose around the original film, which Reggio still admits initially was not to have a title—at least not a lexical name—let alone a definite point. Affixing the Hopi word "Koyaanisqatsi" and its defined meanings at the close of the film indeed imposed a narrowing of interpretation if not a concrete argument, and the subsequent consistency with the trilogy's titles have carried on that concentration of themes concerning humanity.

Koyaanisqatsi shows "life out of balance," particularly with the simplistically understood clash of technology and nature; Powaqqatsi deals with "life in transition," though is also concerned with man's exploitation of other men; and Naqoyqatsi focuses on "life as war," but seems as much concerned with how we're collectively killing ourselves as with how we're killing each other. If the first film's issue is environmentalism, the second's is human rights and the third is a matter of just hopeless doom and gloom, a non-expository groundwork for documentaries like Mathieu Roy's Surviving Progress.

It is worth noting that not only are the "Qatsi" films entirely unlike one another in terms of approach and style (which you'll notice more clearly than ever when you watch them back to back via this set), but Fricke's departure after the first installment to direct his own non-verbal documentaries, such as Baraka and its recent sequel Samsara, might have removed the heaviest interests in equivocality from the continued project. His solo works, even greater than Koyaanisqatsi, are certainly more about giving off a feeling than communicating a message.

The sequels are also somewhat lesser films in terms of fresh, mind-blowing spectacle and aesthetic pleasures. Koyaanisqatsi has far more memorable moments, between its expansive shots of natural and man-made wonders and its time-capsule portraits plus, obviously, its time-lapse segments. Powaqqatsi has its remarkable opening sequence of Brazilian gold miners but little afterward that is quite so magnificent. Its third-world imagery can also be more of a turnoff to some audiences. And Naqoyqatsi might fail to stick with you given its predominant employment of stock and archive footage, as well as the way it alters this material through thermal imagery and other special effects that make the film darker and uglier than its predecessors.

Meanwhile, Glass' musical contribution becomes more interesting over the course of the trilogy. Casually, in the same way the films might initially appear to be similar efforts of randomly compiled images, the composer's works tend to be viewed as having a certain conformity of style, distinguishably repetitive and minimalist. In different supplement interviews in the Criterion edition, you can hear details of how his processes with the collaboration changed with each installment, how he was more on-set with Powaqqatsi, which also fittingly incorporated more of a world music sound given its greater global focus, and the significance of having solos by cellist Yo-Yo Ma for Naqoyqatsi. Learn of how Glass perceived his scores in terms of their relation to the visuals and it will change—perhaps improve—how you hear and appreciate each during their respective films.

Regarding the other bonus features that come with Criterion's set, while Reggio's willingness to talk a whole lot about the films could spoil some of their mystery, his supply of background information and content should be more than satisfying for the curious and scholarly alike. Among the wonderful exhibits on display are a test reel of preliminary footage with an intriguing yet fortunately abandoned audio track scored vocally by Allen Ginsberg, clips of early executed ideas for a totally different direction of the film—constructions that Reggio calls "Busby Berkeley-like," and, best of all, full presentations of Reggio and Fricke's series of awesomely surreal spots for a TV campaign on the issue of lost privacy in the information age.

There's also Reggio's unrelated 1992 short film, Anima Mundi, also scored by Glass, which is kind of like a "Qatsi" version of a nature/wildlife film with its slow-motion sequences of animals and insects. It's cinematic trinkets like this that make a set like Criterion's The Qatsi Trilogy a must for those of us who like to be completists and see all we can of and by certain filmmakers, regardless of whether or not we enjoy it all.

Christopher Campbell is the managing editor for the Documentary Channel's blog, and his writing on both documentary and fiction can be regularly found on Moviefone, Movies.com and Film School Rejects. He has an MA in cinema studies from NYU and he currently lives in Atlanta.

END_OF_DOCUMENT_TOKEN_TO_BE_REPLACED

For a Song: How to Get the Music You Want