The West Coast Years of a French New Wave Filmmaker 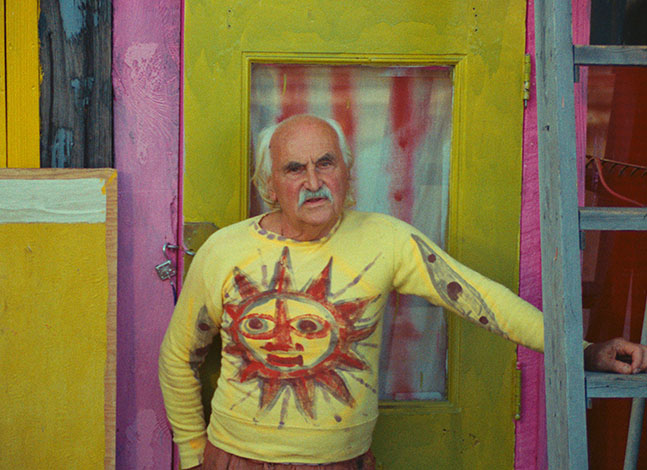 Eclipse 43: Agnès Varda in California
Released by The Criterion Collection

At the Cannes Film Festival this past May, the indomitable French filmmaker Agnès Varda was awarded an honorary Palme d’or—the first woman to earn such an honor. It was the most recent in a string of much deserved accolades going back over her long distinguished career, which began in 1954 with the release of her first film, La Pointe Courte, which established her as a stylistic precursor to the French New Wave.

Today, at 87, she remains a dynamic contributor to the world of avant-garde film and art. Her work is not as well known in the US as it is in Europe, but this new Criterion release of five films she made in California between 1967 and 1981 will help to fill the void. These films demonstrate the breadth of her work as she navigates the worlds of fiction, art, politics and documentary.

While it is not necessary to know anything about Varda in order to appreciate the films contained in this boxed set, I do highly recommend The Beaches of Agnès (2008), her most recent film/memoir, which aired on PBS’ POV in 2010. The documentary features excerpts from her California films, for it was in part the beaches—along with the air, color and light of the West Coast—that so engaged Varda when she moved to California in the late 1960s with her husband, Jacques Demy, to facilitate the making of his first Hollywood film. In experiencing California for the first time, Varda brings the curiosity and observant eye of an anthropologist. Some of her filmic devices are reminiscent of another French filmmaker, Jean Rouch, whose collaborative films with his African friends and colleagues were often included in ethnographic film festivals such as the Margaret Mead in New York City.

Seemingly objective but often sly, political and cultural references infuse Varda’s California films. The first two short documentaries were made in the San Francisco Bay Area. Uncle Yanco (1967) not only introduces the Greek immigrant uncle whom Varda has tracked down and meets for the first time on camera, but reveals the filmmaker herself as she moves from behind the camera into the frame, making a joke with repeated takes of their supposed “first” meeting. A buoyant joie de vivre seems to be genetic, as Varda demonstrates with an animated drawing of her family tree, showing us the kinship between her and Uncle Yanco. The exuberance for life and art exuded by both filmmaker and subject parallels the vibrant, Fauvist Northern California landscape that Varda expertly captures, making this a nostalgic return to the best part of 1960s America.

Black Panthers (1968), shot in Oakland during a demonstration protesting the imprisonment of activist and Black Panther co-founder Huey P. Newton, strikes a very different tone. Although shot in color, its somber yet urgent mood seems black-and-white. It is serious, and while empathetic, the filmmaker maintains the objective distance of a curious outsider.

Later in 1968, Varda traveled to Los Angeles to shoot Lions Love (…and Lies). This is the most complex and structured of the films in the collection; at 112 minutes, it is also the longest. The film takes place in a sun-drenched rented house in the Hollywood Hills, where the intense color feels hotter than the languid golden sun of Sausalito captured in Uncle Yanco. The house is the playground for three characters—a woman and two men. Viva is immediately recognizable as Andy Warhol’s muse from the days when the New York-based Factory was the place to be seen. She cavorts, mostly naked, in and out of bed with her lovers and housemates, James Rado and Gerome Ragni, who created and starred in the rock musical Hair. A fourth character shows up: underground director Shirley Clarke, playing herself. She is also a stand-in for Varda. Clarke attempts to raise funds to shoot a film, and we are treated to some high-concept humor in the backroom negotiations of three Otto Preminger-like film executives about the viability of Clarke’s film as a piece of entertainment. All is not merriment, as the assassination of Senator Robert F. Kennedy, Jr. is caught on TV, giving the film a gravitas that underscores much of what we remember of 1960s America.

After a 10-year hiatus in France, Varda returned to Los Angeles in 1979 and shot two films, both very different in form from the earlier work, and stylistically very different from each other. Mur Murs (1980), a documentary, was my least favorite in this collection. Its mosaic of the many murals that festoon the city—both those that were officially commissioned and those that fall somewhere on the edges of graffiti—seem too random, and at 82 minutes, the film is too repetitive and too long. There are moments of intimacy, but we never stay long enough to connect with any of the many characters who populate this film.

Documenteur (1981), a delicate fiction film, had my rapt attention. Different in texture and tone from the earlier films, it tells the story of a divorced mother and her young child (played by Martine Demy, Varda’s own son) struggling quietly to overcome loneliness and make ends meet on the fringes of a city that lacks a center. The mother, played by the attractive Sabine Mamou (an editor on both films), is emotionally numb but manages to keep herself pulled together for the sake of her son.

While all of Varda’s films are collaborations of some sort, giving the impression that accidents are easily incorporated into the scheme of things, there is no doubt who controls the final outcome. Criterion has recognized her contribution to the art of filmmaking by releasing this as the 43rd boxed set in the Eclipse series, which began with Early Bergman and includes Postwar Kurosawa and Three Crime Dramas of Yasujiro Ozu.

Criterion is known for making international and hard-to-find films available to enthusiasts by publishing them in editions that offer the highest technical quality. The credits indicated that Varda oversaw the color correction on this series of films. The Criterion website touts “the work of such masters of cinema as Renoir, Godard, Kurosawa, Cocteau, Fellini, Bergman, Tarkovsky, Hitchcock, Fuller, Lean, Kubrick, Lang, Sturges, Dreyer, Eisenstein, Ozu, Sirk, Buñuel, Powell and Pressburger.” They go on to say, “Each film is presented uncut, in its original aspect ratio, as its maker intended it to be seen.” And as with Varda, “We work with directors and cinematographers to ensure that the look of our releases does justice to their intentions.”

While all this is laudable, out of the 43 filmmakers included in the Eclipse series, there are only three women: Russian filmmaker Larissa Shepitko; Chantal Akerman, widely recognized in the avant-garde film world; and now, Varda. I’m not sure what this says about Criterion, or about what we collectively regard as valuable and worthy of preserving when it comes to film history. I know it gave me something to think about.