Even though San Francisco makes no claim to hosting a documentary festival, I managed to take in about 30 of them during the recent two-week San Francisco International Film Festival (April 23-May 7), merely half of what was being offered. The SFIFF's 1998 line-up—174 films from 45 countries—contained anywhere from 50 to 60 documentaries, depending on your definition of the genre.

The truth is that defining something as a "documentary" is a double-edged sword-so, many of the filmmakers and program notes refer to a "nonfiction film" or "reality based narrative" or "concert film" or "personal reflection" or anything that avoids using "the D word." In the end, I decided that any item in the program whose credits did not include a cast list was probably something that someone somewhere would call a documentary. Always standing in a coffee line pondering definitions aloud, I happened upon Ron Havilio, whose Fragments Jerusalem (Shivrei Tmunot Yerushalaiin) was playing next door. He was on his way to answer audience questions, but he promised that before the festival was over he'd convince me that "documentary" is a dirty word because it is outdated and sterile. "Hmm" I thought , "but what about the evolution of the genre? What about audiences who like the idea of learning? And, how about personal explorations? Why not boldly enlarge the genre rather than cast it out?" Unfortunately, Ron and I never found time to complete the definition debate, but (however you define it) his epic history of his family and his city was extremely well received by audiences who saw all six hours in two cycles. At the end of one screening, Havilio told the audience that this was the only film print in existence. At the beginning of the next screening, an audience member handed the filmmaker a $10,000 check to make another print.

Later, asked Brian Gordon—who is coordinator of the Golden Gate Awards, the festival's competitive section for documentaries, shorts, television and experimental pieces—why program notes were sometimes vague about whether a film was fictional or not. "We just didn't want to label stuff," he said, which makes sense only in this city of such self­ proclaimed freedom. After all, this is a festival that intersperses stars with total unknowns and displays very few signs of hierarchy in terms of film venue and publicity. This year's play list ran the gamut from Hollywood lookalikes, such as Brian Gilbert's Wilde and Wayne Wang's Chinese Box—the opening and closing night galas, respectively—to a program of videos by local teenagers who examine such topics as sneakers, jail and how a family manages to cope with one sister's schizophrenia. There were also selected films from SFIFF's past 40 years, as well as retrospectives and awards for: Korean filmmaker Im Kwon-Taek; the blacklisted director John Berry; Oscar®­ winning actor Nicolas Cage; innovative curator Adrienne Mancia; along with photographer-filmmaker Robert Frank, who received the Golden Gate Persistence of Vision Award. In honor of Frank, the festival screened his Cocksucker Blues, Me and My Brother and a series of diaristic shorts ending in his most recent reflection, Flamingo.

Cocksucker Blues, Frank's concert film about the Rolling Stones (1972), was probably the most popular screening this year, turning away hundreds who couldn't fit into a sold-out house of 1,400 at San Francisco's Art Deco landmark, The Castro Theater. With its newly overhauled sound system, The Castro hosted other musical extravaganzas, such as Sergei Eisenstein's Battleship Potemkin (1925), accompanied by a live performance of its original score, and Audience Award winner Black Tears (Lagrimas Negras), which got a standing ovation and had the audience clapping along to performances and rehearsals by the Cuban group, La Vieja Trova Santiaguera. Director Sonia Herman Dolz intercut the group's irresistible rhythms with their backstage foibles and interviews that convey both the wisdom and playfulness of old age­—the youngest member of the quartet hopes he'll be able to pull the most women on tour because at 62, he's the baby of the group; however, once his octogenarian co-musicians get on stage, they shed their decades, abandoning walking sticks in favor of slightly naughty lyrics and hips that wiggle enough to give anyone a run for their money.

Other music documentaries to create a buzz were: Iara Lee's Modulations about the avant-garde music scene; Storefront Hitchcock, Jonathan Demme's straight­ forward depiction of Robyn Hitchcock giving a concert in a storefront; and Don McGlynn's Charles Mingus: Triumph of the Underdog, which won a Golden Spire for its rich portrait of the man and his music. One music-oriented documentary that captivated audiences was Heddy Honigmann's The Underground Orchestra. As with Honigmann's recent features (O Amor Natural and Metal and Melancholy), this documentary appears to be a simple portrait told through the aggregation of on-camera interviews in a specific city, but it is really something much deeper. This time we meet musicians from around the world who play on Paris streets and in the metro or even in concert halls. They all are here to get away from somewhere else: death camps in Zaire, army desertion in war-torn Yugoslavia, starvation-level poverty in Romania, civil war in Algeria, or torture in Argentina. Their woes are described with a refreshing lack of sentimentality, but their passion is evident in the beautiful music that rings forth from guitar, piano, double bass, or accordion, even a harp that you would never guess was homemade. Together, they convey the most profound portrait I've ever seen of immigration and the consequent feeling of displacement. What is more, Honigmann doesn't forget their sense of humor or the imagination that inspires one violinist to equate Beethoven to Jimmy Hendrix, Schubert to Jim Morrison , and Bach to AC/DC.

Underground Orchestra was one of the favorites for high school children, 350 of whom came to see it as part of "Schools at the Festival," a program to introduce local schoolchildren to festival films. "We wanted to wean them away from the junk­ food Hollywood diet they feed themselves with," said coordinator Robert Donn, who founded the program in 1992. This year some 2,000 students came to 19 festival films, half of which were documentaries. Several filmmakers said their favorite part of the festival was visiting schools after their screenings and confronting the uncontrollably honest curiosity of a teenage Q&A. I would love to have been at the high school Q&A for Jay Rosen blatt's Human Remains, which imaginatively edits found footage to explore the private lives of dictators. It's hard to avoid prurient curiosity as the diary-style narration relates Adolf Hitler's penchant for chamomile enemas and the fact that he and Chairman Mao each had only one testicle, or that Joseph Stalin was a practical joker who liked putting salt in wine, and Mussolini thought that a man who is unappealing to women is useless. And so the faces of evil become more human and more bizarre.

The attempt to face memories of evil was the theme of several Golden Spire winners. Chile: Obstinate Memory, which won the top History category award, is Patricio Guzman's breathtaking excavation of a nation's repressed memory syndrome. An incredible accomplishment is that this is just as strong a film about memory as it is a poignant study of the aftermath of revolution and oppression. When the lights came up, it took the audience several minutes to compose themselves before they were able to ask questions. Golden Spire for First Person Documentary went to Fatima Jebli Ouazzani's In My Father's House, a beautifully crafted tale about Ouazzani's refusal to conform to the laws of Islam when she was 18, and the fact that she hasn't seen her father since that day.

Paulina, which took the Golden Spire and Grand Prize for Best Bay Area Documentary, is the tale of an extraordinarily strong Mexican peasant who had the guts to let filmmakers Vicky Funari and Jennifer Maytorena Taylor dig up a traumatic childhood rape and forced marriage and retell them through interviews and recreations. Today, Paulina Cruz Suarez is a grandmother and works as a domestic; but the power of her story on the big screen means that at festivals such as this one, she can revel in being a movie star. "I didn't want to remember," said the film's protagonist as she sat at the Golden Gate Awards ceremony, clutching one of the many prizes that this film has won. "Remembering gave me tummy ache and diarrhea. But the film has restored my honor. Seeing it on the screen was like the serpent changing its skin, and the old skin stays on the screen."

In terms of emotional recompense, festivals can be the most satisfying arena for filmmakers because they actually get to talk to their audience, and SFIFF's relaxed atmosphere is very conducive to this. When Lockin' Up screened here, it was the first time that filmmaker T. Nicole Atkinson had brought her father to see the work in public. This is a very personal documentary in which Atkinson confronts the political oppression and historical baggage that come along with growing dreadlocks—not to mention the myriad methods of avoiding lint build-up. With inspired editing and a wry sense of humor, Atkinson points the camera at her own sprouting head—1.1 inches, 3.1 inches, 4.3 inches—and pokes fun at her early perception of ganja-smoking Rastas , and her quest for Farrah Fawcett bounce, societal approval and finally the perfect locks. "The audience responded well and laughed in the right places," said Atkinson, whose beautiful locks now fall well below her shoulders. "It was a very meaningful screening because it was an acknowledgment by my peers. And when my father saw that, I think he reassessed my career and told me he was proud of me. After that, I didn't care what anyone else thought."

Several proud family members attended the lavish yet casual Golden Gates Awards ceremony that falls just a couple of days before the end of the festival. However, I saw only one other Golden Spire being clutched as tightly as Paulina's. Eight-year-old Molly Lewis erupted into giggles and cradled the engraved prism that her father, Mark, received for his hysterical profile of New York rats, their "attitude problem" and the lengths people will go before they're resigned to cohabiting with vermin. The kicker is that during the Q&A for Rat, Lewis confessed that he'd used specially trained rats, flown into Manhattan for reenactments. So, now I have to wonder if I'm supposed to dump "the D word" in favor of, say, "docudrama"—at least when the rats turn out to be actors?

JASMINE DELLAL is an independent filmmaker based in San Francisco. Her review of the 40th SFIFF appeared in the July-August 1997 issue of this magazine. 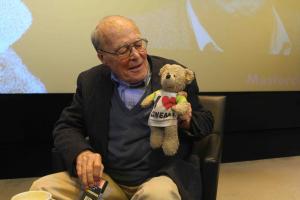 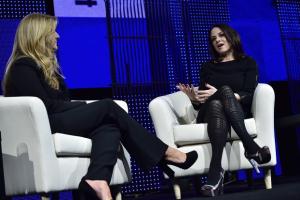 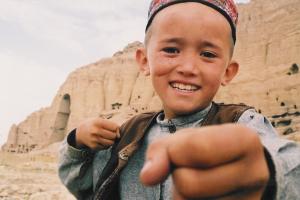 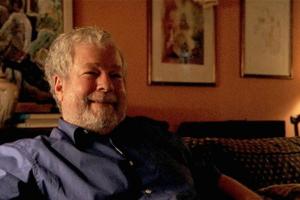