COVID Productions in the UK 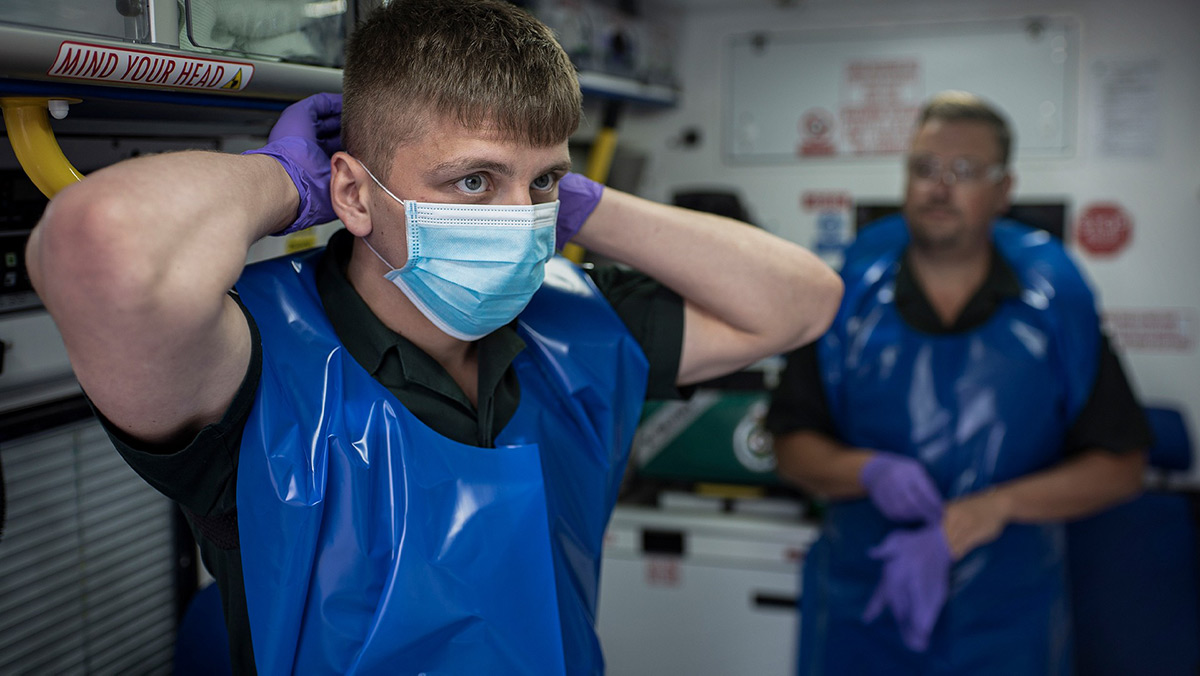 Britain’s public service broadcaster Channel 4 took an early lead in commissioning fast- turnaround films about how the coronavirus is impacting the UK.  As a publisher broadcaster, Channel 4 solicits all of its content from the independent production community. Channel 4’s Head of Factual Danny Horan notes, “We have been in conversations and pitched great ideas by the best storytellers in the business. It’s been our lifeblood and will continue to be.”

Documentary spoke to three production teams about their approach.

A Day in the Life of Coronavirus Britain: Inspired by Kevin Macdonald’s Life in a Day, this film aspired to depict how the virus is impacting Britain over the course of 24 hours.  Director Anna Hall and her team for Candour TV filmed and solicited footage from the public, all shot on April 3. It was broadcast the night of April 6 after a Herculean, round-the-clock editing process.

When the project was commissioned in mid-March, the team immediately went into isolation, before the country at large did, out of fear of the virus spreading through the team and derailing the production. “The day we got the commission I just sent everybody home and said, Right, we're gonna have to make this film remotely,” recalls Hall.  The film was made in two-and-a-half weeks with a crew of 46 people, and production meetings held on Zoom.

A clip from A Day in the Life of Coronavirus Britain, which director Anna Hall and her Candour TV team filmed on April 3; Channel 4 aired the film on April 6. Courtesy of Candour TV.

The film was a fairly even mix of material filmed by self-shooting crews around the UK, and user-generated content. The call-out for submissions yielded 3,185 clips from the public. “We had people logging through the night—Friday night and Saturday night, pulling out the gems.” Six edits ran from the production office, with only the editors, assistants, Hall and her exec, documentary maker Brian Woods, allowed on the premises. “What's extraordinary about this film is it was made in lockdown with a team of people who were all at various kitchen tables in their pajamas, logging this material,” says Hall. “Fortunately we set up a really brilliant system so that we could all see the material and we could all talk to each other and then we could all get it into the edit. Considering that that film was made without anybody being in the same room, it was phenomenal, really.”

The channel has implemented strict filming protocols during the crisis. “We were obviously cleaning material all the time, we were following the two-meter distance, we did have exemption letters because we were journalists so we were able to travel around,” Hall says. “We followed the protocols so when people went out they were wearing protective gloves; they were washing down kits.”

Hall says that it was critical that the program not appear like a clip show. “I think people were surprised at the quality of the film because actually we did have drone shots,” she says. She chose the natural timeline of the day to guide the film, within which there were a number of moving stories. One that particularly chimed with viewers was a filmed sequence interviewing a funeral director detailing how she prepared for burying huge numbers of dead—with no family present.

A challenge was to get the tone right: “How were we gonna handle the fact that on that day two nurses died?” Hall asked. “And how do you get the tone right between really funny UGC stuff of kids messing about and people dying?” With songwriter Bill Withers having died on March 30, the film ended with a moving virtual singalong of his “Lean on Me” by contributors from their homes.

Channel 4’s NHS: Our Heroes tells the stories of a number of National Health Service (NHS) workers working on the frontline of the crisis. The workers, from throughout the UK, filmed themselves on their smartphones at work and at home. Producer/Director Sophie Jones of Story Films says that the idea for the film emerged from seeing the social media clips that NHS staff were posting that were going viral. “We felt quite strongly, there was a huge sense of camaraderie coming together. And I think as a result of that we thought there was a much bigger story to be told purely from the perspective of frontline NHS workers. So from there we pitched it to the channel and they were keen.”

A clip from NHS: Our Heroes (Dir./Prod.: Sophie Jones), a Story Films that premiered in May on Channel 4. Courtesy of Story Films.

The turnaround for the film was about five weeks—it was broadcast on May 6. The team had about 200 people come forward, willing to film themselves and their experience. From that, 16 main contributors emerged, ranging from a hospital’s chief executive to a paramedic.

Jones has a huge amount of experience filming the NHS for public- service television, having worked on a number of productions including Channel 4’s long-running 24 Hours in A & E and the BBC’s Hospital: “You always feel privileged making NHS documentaries, I always have. And I’ve always been in awe of the staff and I always think it takes a certain type of person to work for the NHS.”

What sets this film apart, according to Jones, is the fact that it allows viewers into the homes of NHS workers for the first time, through Zoom interviews and footage shot by the contributors themselves. “What I find extraordinary this time is seeing them in their home environment and being with their loved ones and actually seeing the kind of conflict in them as well. We’re really seeing them torn between their loved ones and their actual vocation,” she says. “And I hope as a result in this film you’ll be able to see maybe a different side to them and through personal perspective and also through family perspective. How do families feel about what they’re going through?  The very fact  that they’re even giving their time to a project like this is extraordinary.”

Jones notes that the film underscores the enormous range of emotions and experiences the virus is provoking: “I’ve never seen such a moment in time where we go from seeing such camaraderie of humankind, then polarized with people having to die in a hospital bed alone.” The biggest challenge for Jones was “giving the subject matter true justice and heart, and being able to give it the breadth and the depth that it deserves through user-generated content and interviews done on Zoom.”

The film doesn’t shy away from the often harrowing testimony of NHS staff about the mental health toll the crisis is taking on them, as they deal with death on a daily basis. The lack and inadequacy of PPE is a theme throughout, as is the very real fear of getting sick themselves. The film includes many moving scenes, including (as seen towards the end of this clip) a doctor filming herself on the telephone talking a relative through how they can come in to say their goodbyes. In a piece to camera afterwards, she marvels at how the relatives cope with the fact that after coming in to say their goodbyes in hospital, they then have to self-isolate—and miss the funeral.

The film struck a chord with the viewing public, trending on Twitter. The Guardian’s Lucy Mangan  wrote that the “acuteness and particularity of the stresses frontline medical staff face are brought vividly home.”

Commissioned in January, The Race Against the Virus focuses on the science community trying to develop a vaccine. Executive producer and head of Voltage TV Sanjay Singhal says the film was pitched as a science documentary with the perspective of the scientists in mind. "In my head it felt that actually, there’s a number of scientists for whom their moment has come,” he maintains. “These are all people who are not under any kind of governmental control, not under any international organization control. , They all independently started doing their thing in labs and research institutions around the world. So that’s really what our film is about."

Director Ursula Macfarlane's approach is to try to have a conversation with the scientists as they work in their various, sometimes secret, locations around the world. Singhal says unlike a conventional doc, which relies on a master interview, this film will keep returning over time to check in with the scientists.

His ambition for the film is for it to be a documentary thriller. "That’s the idea behind it. Because of the enormous jeopardy, it’s the biggest threat of our time. The thing about this program that’s quite difficult sometimes to get your head around is that it’s not quite a retrospective.” But neither is it a present-tense, actuality-driven narrative where you’re just in the moment and watching it play out until the end, ‘cause that could go ‘til whenever, right?" He anticipates a July broadcast for the film. “In terms of endpoint, my feeling is, we’ve got to work out what feels like a good narrative moment to come out of the story."

Singhai expects the final film to include the storylines of scientists in six countries. "The problem here is, it’s such a massive topic, and the danger is you can go chase down various different rabbit holes. You can’t tell the whole story in a single hour. And therefore it’s just about trying to work out, Where do we focus?, here do we point our guns? "

With filming restrictions in place, the production is doing very limited shooting. The interviews conducted remotely will be complemented by cinematography that roots the storylines's location.“I can’t tell you how pleased I was to find that there was a DP who’s going around the west of England at the moment shooting these beautiful GVs of deserted landscapes and everything for us, because that’s where one of our science labs is based. And we want to shoot in London and probably other foreign cities to shoot these kind of cityscapes."

Singhal says that the coronavirus crisis has placed science front and center. His company also made a special debate show about the pandemic, which aired on Channel 4 on April 22. “It’s the biggest issue in the world, and science is the only solution to it. So the marriage of those two things means that science is suddenly like an incredibly important genre of television and needs to be treated as such,” Singhal says. “I think it’s the Public Service Broadcasters that are doing that because they’ve always had a tradition of doing it.”

Carol Nahra is a London-based journalist and documentary specialist. She blogs at www.docsonscreens.com and hosts the new podcast DocHouse Conversations.

END_OF_DOCUMENT_TOKEN_TO_BE_REPLACED

Remembering a White-Haired Warrior: 'Silence of Others' Protagonist Lost to Coronavirus