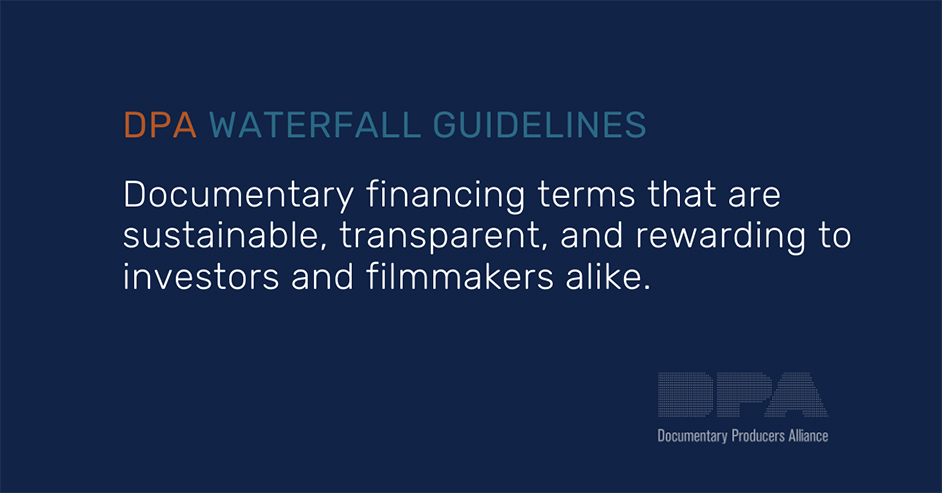 Since our founding in 2016, the Documentary Producers Alliance (DPA) has grown to include over 300 members from 53 cities, eight countries and counting. Originally founded to advocate for producers whose role was misunderstood and chronically underpaid, the DPA’s work allowed us to realize that the issues we were facing were not due to our professional failures but to systemic ones larger than ourselves. Our goal as an organization is to identify and advocate for best practices for a field that is largely unregulated. In 2019, we published the Crediting Guidelines to standardize and bring equity to documentary crediting practices. We are gratified the Crediting Guidelines have since become a standard part of many financing agreements. As of this writing, our committees are addressing a number of other challenges affecting documentary filmmakers—from unsustainable wage and labor practices, to entrenched structural inequality, to the paucity of development funds. We have established a Regional Committee to diversify the field of producers working outside of East and West Coast hubs. We are marshaling data about how both careers and films are actually created to underscore the need for industry-wide change. Ultimately, through collaboration with key stakeholders—including funders, financiers, artist organizations, and fellow filmmaker alliances—the DPA is working to put guidelines for fair practices in place to help make documentary filmmaking an accessible, viable and equitable career path for those who choose to pursue it.

Our work on the Documentary Waterfall Guidelines began three years ago, spurred on by experiences from even the most seasoned documentary producers who struggled to put together deals that left them without debt or unpaid labor at the end of a project. When COVID-19 hit, independent filmmakers, working mostly as freelancers outside of traditional safety nets and largely left out of government rescue packages, faced distribution, financing, and production systems stressed to the extreme. The precariousness of earning a basic living as a documentary filmmaker was laid bare. The historic international anti-racism reckoning in the wake of George Floyd’s murder only further reinforced the structural inequalities for BIPOC filmmakers working in documentary film, like many other sectors of American life, who are underrepresented in positions of power and often significantly more under-resourced than their white counterparts. While interrogating our systemic financing structures is not the only path to creating a more sustainable and equitable field, it is a concrete place to begin.

Over the past 5-10 years, as the popularity of documentaries has grown in the marketplace, funding sources for independent documentaries have diversified. Investment financing and recoupable grants (both defined by an expectation of repayment) have emerged alongside long-standing sources of non-recoupable funding such as institutional grants, private philanthropy, and pre-sales. We are encouraged by this influx of new people and resources into the field. We want to reward investor risk with both financial returns and the satisfaction of “double bottom line” returns such as supporting creative artists or advancing social justice work. At the same time, it is essential that those rewards do not come at the expense of filmmaker sustainability or work at odds with the missions of philanthropic funders who have long supported the field.  These guidelines were developed through hundreds of volunteer hours by DPA members in collaboration with representatives from more than 30 investor and grantor organizations, filmmaker advocacy organizations, lawyers and accountants who have given generously of their time and expertise. Together we crafted guidelines we believe to be fair for all parties. The nearly 30 endorsing organizations, from Impact Partners to Cinereach, agreed.

In developing the guidelines, we navigated the frequent tension between funder and filmmaker to keep budgets “reasonable” while still providing for living wages.  We also recognized that this tension may be exacerbated by the demands of investment financing expressly structured to benefit from a film’s profitability. DPA’s new “Guidelines for the Documentary Waterfall”—using a broad definition of the term “Waterfall”—provides guidance on how to structure the financing on any given documentary film from the original budget through the allocation of net profits. The guidelines are structured to offer multiple solutions at various junctures in the Waterfall to address these stress points while also adhering to the complex legal and accounting requirements of investments.  The guidelines are not a how-to for budgeting. Ultimately, it is the producer’s responsibility to create realistic and professional budgets that make the filmmaking process transparent to financiers and garner mutual trust. Our broader intention, in keeping with all of DPA’s efforts, is to facilitate greater transparency on the aspects of documentary filmmaking that impact the industry as a whole.

What follows are a few “big ideas” from the Guidelines, which we believe are essential for productive  funder-filmmaker relationships, and for building a healthier documentary ecosystem:

The recommendations in our guidelines are crafted as best practices rather than requirements, and we recognize that some situations may warrant filmmakers and funders to deviate from them or only employ parts. Still, we encourage the parties to use these guidelines as a starting place, with the specifics of a project dictating where, when, and how exceptions are made. It is worth noting, a number of these recommendations may seem unconventional. But ultimately, we believe investment funding should be fair for both investors and filmmakers by first acknowledging the risks and then financially rewarding all participants in the profitability of the films they create together.

We are embarking on the DPA’s second major guidelines release in the midst of an expanding pandemic, as well as a profound international anti-racism movement for equality and justice. Society is looking to documentary filmmakers to tell urgent stories — particularly from the perspectives of the communities impacted — about these movements that are changing the world. We are hopeful this moment will help to usher in new financial resources to films and filmmakers, and believe these guidelines are vital to ensuring that the money flows to documentary storytellers in an equitable and sustainable manner. We at the DPA once again reach out our hands in solidarity to funders and financiers, who are instrumental partners in the work of documentary filmmaking -- a genre of film built, at least in part, by the desire to shine a light on social injustices and needed solutions:  let us stabilize the field together so that we can create the more robust financial infrastructure necessary to produce more of the brave, bold and diverse independent documentary films we wish to see in the world. Onward!

Lance Kramer is an independent documentary producer, co-founder of Meridian Hill Pictures based in Washington, DC and chair of the DPA Development Committee.

Yael Melamede is the founder of SALTY Features, an award-winning production company based in NYC.

Josh Penn is a producer with the Department of Motion Pictures and a DPA Chair at large.

END_OF_DOCUMENT_TOKEN_TO_BE_REPLACED

The Kindness of Strangers: A Guide on How to Treat Your Equity Investment Funders

A (Revised!) Introduction to Documentary Budgeting