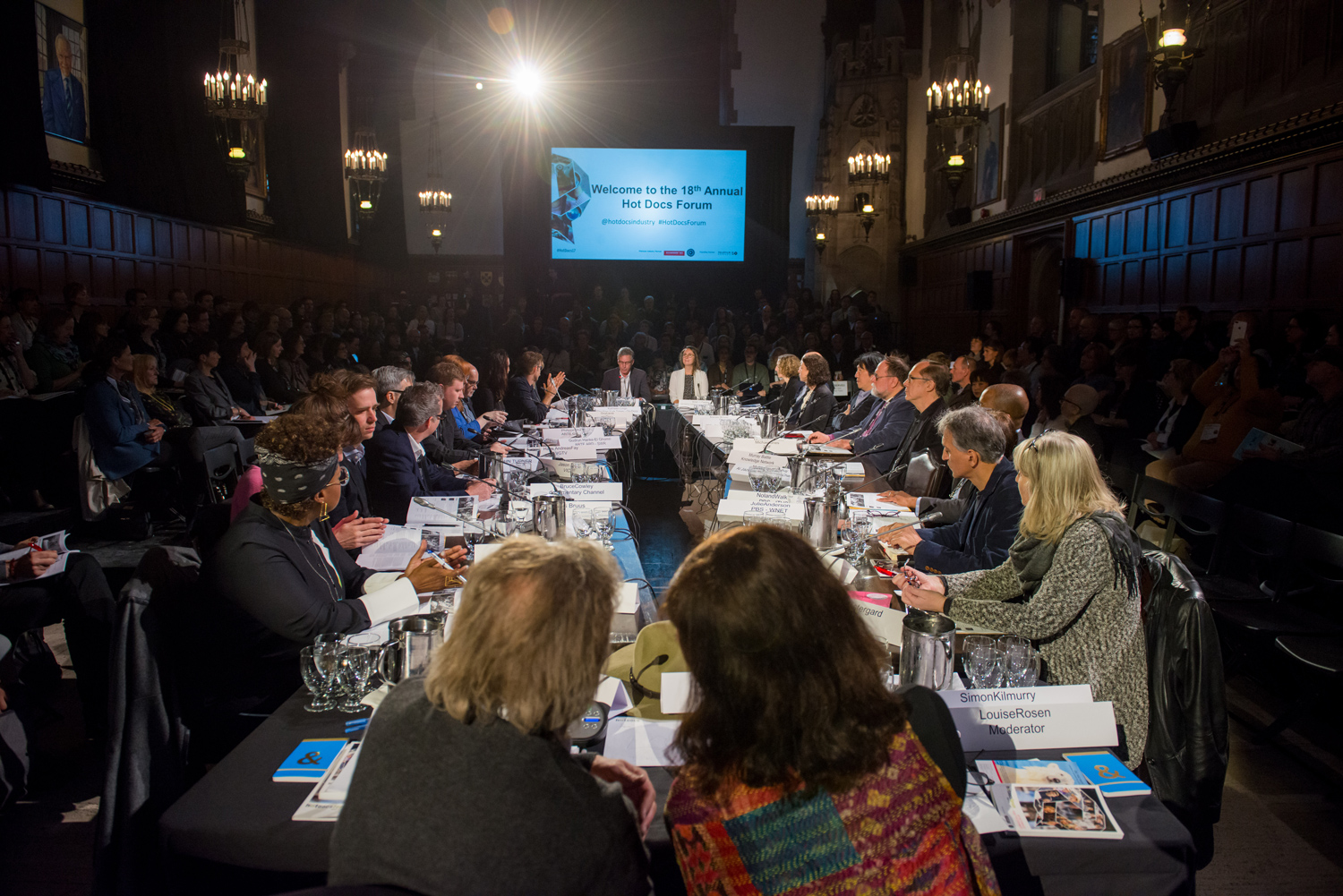 During every phase of production, documentary filmmakers are required to articulate their expansive artistic vision and months or years of work in a few compelling sentences. In pre-production and production, succinct summaries are pitched to funders and collaborators, and in pitch forums. To reach the distribution finish line, post-production may require pitching to festivals, distributors, commissioning editors, broadcasters and other gatekeepers. And finally, when the film finds distribution, the filmmaker pitches to the media, viewing audiences, influencers and issue-centered constituencies.

For documentary filmmakers, life's a pitch.

That's why we asked three remarkable professionals, "What's a filmmaker to do?" Taken together, their advice suggests five skills every filmmaker needs.

Jenni Wolfson is the executive director of Chicken and Egg Pictures, a grantmaker that supports women nonfiction filmmakers.

Amy Grey is the president of Dish Communications, a public relations firm specializing in documentary films that has helped clients garner 48 Academy Award nominations and 13 wins.

Cumulatively, these individuals have heard thousands of pitches. And they all agree: Everything starts with story.

Before pitching occurs, know your story, characters, issue and audience—and "ask." Be able to articulate these clearly and succinctly, whether pitching on paper in a funding application or in-person.

"Lead with the story, not the issue," Wolfson advises. "By talking about your story and your characters, you're going to get to the issues. We want to see that you can tell a story. Help us understand: Why are you the person to tell this story? What is your personal connection to the project? That’s what’s going to set you apart—the unique access you have."

Wolfson adds that explicitly tying personal experience to the project can boost a project"s credibility, if the personal story and professional experience align with the film.

Know your issues and needs. Know your audience. Know their questions.

Wolfson acknowledges funders' big-picture concerns and priorities. "I think when you're trying to get funding, everyone is looking for the film that’s going to be beautiful and artful, move the needle in the conversation somehow, and have the confidence in you," she observes. "We call it 'taking risks with filmmakers,' and that is what we're doing. Nobody knows how a film is going to end up. If we're choosing ten projects of 300 applicants, we're choosing what we think will be most compelling, have an audience, by a filmmaker who will see it through."

Wolfson advises that filmmakers should be able to communicate "how your film is different and unique and builds on other films" that address comparable subject matter.

Filmmakers, Radshaw continues, "have to have an understanding who their audience is. And that’s the first point of pitching: Who are you pitching to and why?"

During the pitch forum experience at Hot Docs, for example, "There are multiple things happening at one time. The teams themselves are hoping to express their story to decision-makers around the table and get that info across. You also have people in the audience tracking the work, whether they be angel investors or programmers—as well as filmmakers and press.

"If there's no media blackout, these projects [being pitched in the forum] are getting coverage in industry trades, and that information travels even further outside of the pitch room," Radshaw continues. "This all affects what the person pitching says."

Filmmakers must understand their pitching audience to know what to ask of them. A critical aspect that pitching helps achieve, Radshaw says, is conveying the urgency of the "ask": What do you need from the people to whom you’re pitching?

"When you’re very clear with 'the ask,' the urgency of the need is transmitted, and that's critical—especially to the decision-makers," she maintains. "They can go back to the powers-that-be and make a case for moving forward."

Radshaw offers examples of asking for funding to film time-sensitive events: "Sometimes the events are happening. I told you what we're going to see on screen. We need to go capture the events. If we don't do it, we'll miss it." Or, "Our subjects are elderly and when they pass on, so will their stories."

The filmmaker's research duties continue into distribution, when filmmakers find themselves working with a publicist and interfacing with the media.

Ironically, documentarians often neglect to do something critical during production: document. Publicist Amy Grey recommends that filmmakers "keep a journal during production so you can jot down anecdotes to tell the media later when you’re promoting the film. Keeping a journal is really critical. It can be a couple sentences at the end of the day—just a reminder. One of the things that makes for an engaging filmmaker is the process of making the film and what was interesting that happened. That’s what people want to hear."

If you're pitching in person, prepare by performing your pitch for your team, peers, friends and family. Wolfson cites practice as a winning strategy. Preparation boosts confidence. "Someone who delivers a polished pitch, you can tell they know what they are doing," she explains. "Speak clearly, from the heart, and succinctly, and know when you’re going to introduce your footage."

Radshaw points out something that filmmakers sometimes disregard: "What are we going to see on screen for 90 minutes? What actually takes place? What events will we be following? Where do we go during the time of the film? Not just how important the subject matter is, or how important the story is. That is a critical one; folks forget. They get caught up in the cause or social issue. I want to know what my 90 minutes are, what takes place, and what are we going to see on screen."

The good news? Pitching styles differ according to personal preferences and are ultimately centered around the filmmaker's truth. Pitches can be conveyed, performed and shaped in a way that meets the filmmaker where they are as humans, artists and thought leaders.

For some, pitching evokes an image of someone standing and talking, then showing footage. But Radshaw explains that pitching techniques are always changing. A team that developed a pitch for Hot Docs delivered live voiceover while their trailer played. The team "then continued doing this pitch all around the world, and some of the people have been able to take on that style of pitching. It's not easy, right? You have to have a trailer edited so that during your seven minutes, there is a place to speak or where your live talk kicks off. But that is full-on 'performance pitching.'"

Radshaw stresses there is no best single style of pitching, but, rather, each filmmaker finds a way that is true to their style and vision.

Amy Grey suggests filmmakers "be educated on their issue and prepared for any opposition that comes their way, particularly on social issue films."

She also emphasizes careful vetting and preparation if the film's subject will interface with the media. As a publicist, Grey "would be involved in prepping the subject as to what questions they may be asked and what the best responses are. But the problem is, you can't always control someone else’s narrative; it can be risky. So my advice would be, Weigh very heavily before you ask a subject to participate in the promoting of the film—if it's going to be to your benefit or your peril."

Grey cautions that sometimes "filmmakers tend to think their film is going to save the world. You have to be more self-effacing than that. If you're humble, people will respond to you."

In addition to humility, Grey also highlights gratitude and respect. She recommends filmmakers send thank-you notes to journalists after interviews and remain mannerly through the duration of the campaign.

Distribution is the moment when a filmmaker's hard work pitching to funders and decision-makers pays off. Radshaw offered a wise strategy—help your distributor and publicist help you. "The filmmaker," Radshaw says, "still needs to take the pitch they used to finance the film and reformat and repackage it so they have a really good positioning statement and materials available for the public."

Using their film's positioning statement, filmmakers may "go from there to design a communication around their film that they can hand to the publicist that they hire to launch their film." With this tool, Radshaw says, filmmakers "have a set of questions answered for their distributor, for their publicist, and with these key elements, then these amazing partners that they have brought on board will have incredible fodder to light mega-fires for their films."

With a comprehensive approach rooted in robust preparation and a "story first" strategy, powerful pitches can influence decision-makers, hoist the film over the distribution finish line, ensure the story finds its audience—and maybe even change the world.

END_OF_DOCUMENT_TOKEN_TO_BE_REPLACED

The Risks and Rewards of International Pitch Forums