The Long Tail of Self-Distribution 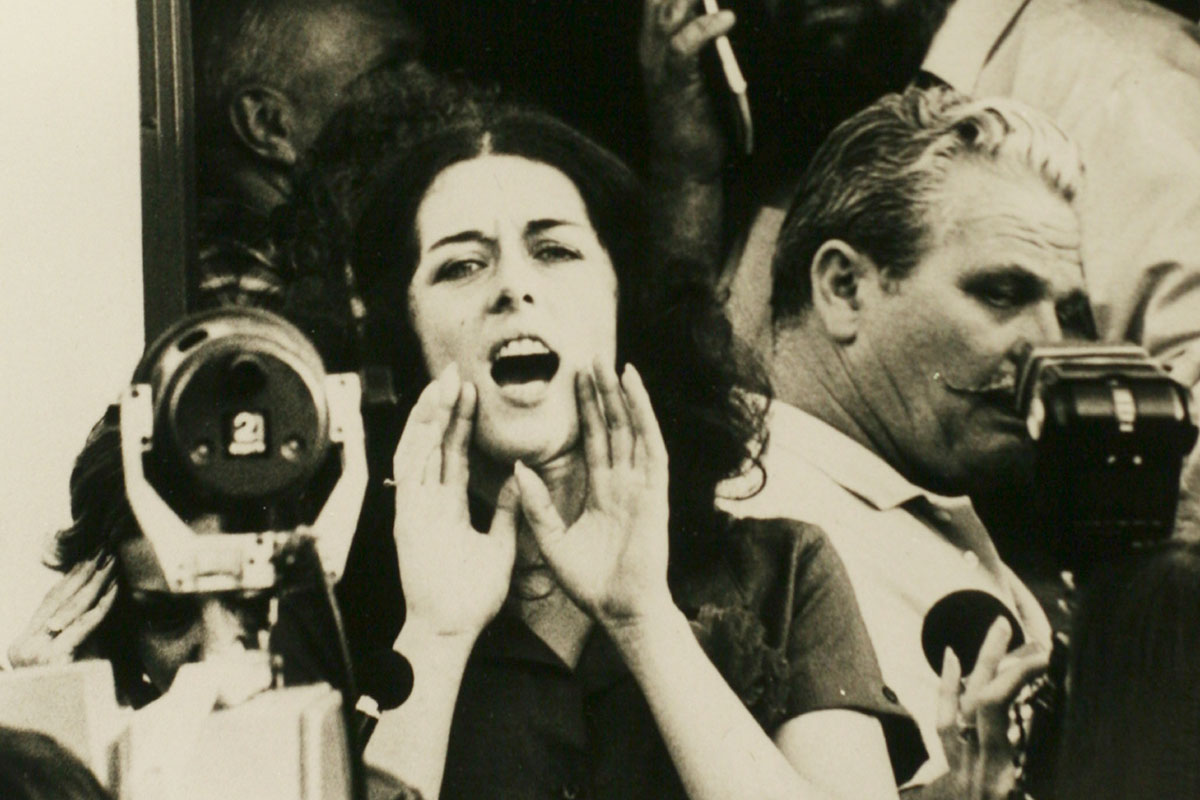 This is a tale of taking our old films and meeting the brave new world of distribution. A lot of ingenuity is called for to keep our films before the public. We want to share with fellow filmmakers what we did and what we learned about taking back your work and repurposing or repositioning it vis-a-vis the new market realities.

I made the documentaries Berkeley in the Sixties (1990), an Academy Award nominee and a well-loved classic; A Fierce Green Fire (2012), a big-picture exploration of the environmental movement; and Evolution of Organic (2017), the story of organic agriculture told by those who built the movement. Over the last year we launched The Films of Mark Kitchell. The components of that campaign are:

A few things came together to push me in the direction of self-distribution. First and foremost is the change in the markets. There is so much product chasing so few slots. What money there was has diminished. On the other hand, if your films are not streaming, they are increasingly marginalized. Berkeley in the Sixties and A Fierce Green Fire were both successful in theatrical, non-theatrical and educational distribution; they broadcast nationally; and they were evergreen subjects. But my most recent film, Evolution of Organic, did not get distribution. We spent 18 months on a grassroots outreach campaign, organizing over 100 screenings. Yet it felt like we failed to get the film out there.

As documentary filmmakers, we feel a responsibility to our works. In my instance I couldn’t stand a degraded 30-year-old video master of Berkeley in the Sixties; I felt I owed it to history to preserve an important film. So, Buck and Jenny Bito of Movette Transfer Center digitized from a couple of film prints. Then colorist Gary Coates did a superb job, making the film look better than ever. To cite other recent examples, filmmaker Judy Irving restored Dark Circle, the anti-nuke classic that she directed with Chris Beaver and Ruth Landy; the Academy Archive did a scan for free, but left Irving to erase all the dust, frame by frame. Glenn Silber raised $20,000 from his Wisconsin radical friends for a restoration of his and Barry Alexander Brown’s 1979 film The War At Home, which took a year; IndieCollect, the New York-based company devoted to preservation and archiving, handled the restoration of the film.

Then comes what I think of as the filmmaker’s second job: distribution. We had become expert at grassroots outreach, and now we wanted the films to be on Amazon, Apple / iTunes and Google Play, available widely and cheaply. We discovered that the only way in was through an aggregator.

So, we worked with Bitmax. Their quality-control app, which caught the tiniest of errors, drove me a bit crazy, and the worst of it was the closed captioning. But we were able to get three films on three platforms for $3,000. How have the films done? In the first two months since launching, total sales were $939 on volume of 289 units, 60% of them rentals—a respectable start, but now we need to keep at it, get back to outreach and stoke the fire.

Launching a YouTube Channel has been an adventure. It’s a different medium, the short form. I found few indie docmakers successfully using YouTube. Usually it was to promote their film. But I began to see possibilities: from Berkeley in the Sixties, archival gems and deleted scenes; fundraising excerpts from interviews for A Fierce Green Fire; my student film, The Godfather Comes to Sixth St.; samples from the new project. It’s an ongoing experiment. As of this writing, we have 264 views and 216 subscribers. The Berkeley in the Sixties trailer got 95 views, and 45 views of my new introduction to the film. Of the archival gems posted so far, the most popular is the Hells Angels press conference, with 40 views. Again, not bad, but lots more work to be done.

Our website serves a few purposes. It is a centralized spot for all our films (previous sites got corrupted or belonged to distributors); a source of information for internet search; and a store to sell streams on Vimeo and DVDs. Our educational distributors have either stopped selling DVDs or, according to royalty statements, are selling only a few. Yet it is important to keep DVDs out there—for the older crowd, for the technophobes, and for the people who just want to hold the film in their hand. We got a burst of orders for DVDs from veterans of Berkeley in the Sixties, who are now in their 70s and 80s. I have to admit that I have boxes full of DVDs that are not exactly flying off the shelf, but I’m certain that it was well worth making them.

Longtime sales agent Louise Rosen has been offering all three of our films to US and international buyers, broadcasters and streaming channels, as part of her “Lockdown Collection.” She was prompted by renewed interest in some of her other titles, such as Anne Frank Remembered. She did some email marketing and presented at Sunnyside of the Doc. My films got a nibble from a British broadcaster and a look from Curiosity Stream. No sales yet. But there are interesting developments like Sky TV’s doc channel and the History Channel acquiring for Europe.

Ovid.tv, a streaming platform organized by Icarus Films, Bullfrog, First Run Features and others, promises to be a SVOD home on the internet for independent documentaries. What with Amazon Prime Video Direct closing its doors to docs, it is more important than ever to establish a place where people can find our films. When Ovid.tv was first established, I was a bit dubious, wondered if it would survive. But Louise Rosen commends them for transparency about revenue and audience; Ovid pays a percentage of total views. John Abrahall of Bullfrog thinks Ovid has survived and is building steadily. Now that my films are available, he wants to place them on Ovid. No matter if the revenue and the audience is tiny now, the potential and the need for a documentary platform of, by and for documentarians is a great opportunity that we should all support.

On to outreach, which, for my money (or lack thereof), is the heart of independent film distribution. We build lists as we fundraise from and work with people and groups that have a natural interest in the subject of our projects. For the Dark Circle team, that means Physicians for Social Responsibility and the anti-nuke movement. For The War At Home, Silber targeted anti-Vietnam War protestors and left-wing activists. Each of my films had different constituencies. Berkeley in the Sixties appealed mostly to ’60s radicals, people who had gone to UC Berkeley, and people who lived there or were somehow caught up in the politics. For A Fierce Green Fire, our constituency was the environmental movement and people who care about issues from conservation to climate change. Evolution of Organic appealed to people involved in growing and eating organic food.

In the course of years of making a film, putting on dozens of fundraising events and work-in-progress screenings, sending up to 40 eblasts and newsletters, and conducting two or three crowdfunding campaigns, we usually start outreach with a list of a couple of thousand names. Then we beg, borrow and steal to build our lists up to 5,000 names—that is for me the target size for an outreach mailing list. On Berkeley in the Sixties we had to start over because our mailing lists pre-dated email! Fortunately, the FSM-A Archives has a mailing list of key people active in the Free Speech Movement, which they keep updated. I have tried to go beyond that and build my own independent list, but it’s daunting—after 30 years many of the people on our old lists are either gone or not worth trying to find. The mailing lists from A Fierce Green Fire were close to 10 years old, but we gave them a try and were pleased to find the rejection rates weren’t too high. As for the Evolution of Organic mailing lists, people are tired of hearing from me but it’s still worth letting them know that the film is now widely available. We’ll have anecdotal evidence, but we won’t know the real effects of our outreach efforts until we see more gross sales figures.

What we emphasized this time around, instead of list-building, is asking people to spread the word to their circles. In addition to FSM-A, a few activists with substantial lists sent blasts of our newsletter. Bioneers did an extraordinary promotion: They interviewed me, wrote a long article, praised our films and published it all in their newsletter. We have plans for more outreach via groups: the UC Berkeley alumni association; the Organic Produce Network, started by Tonya Antle, one of the stars of Evolution of Organic; and more than 100 environmental groups, large and small.

Social media is supposed to be a big part of promoting The Films of Mark Kitchell. But it mostly has not happened yet. We still intend to do an exemplary job of social media for this outreach campaign, even if it’s not right away. Another element of our outreach campaign is pursuing the press. While we can’t afford advertising, we can solicit articles and mentions in small publications and blogs. Radio and podcasts offer opportunities. There’s a wide variety of specialized and niche media. We are limited only by our imagination and energy.

What we’ve done so far is a soft launch. We can do a hard launch later, perhaps with money from sales to pay for a proper social media campaign and a publicist to pursue the press. Reputationally, there is synergy between The Films of Mark Kitchell and being in the marketplace launching our new projects, The Emerald Triangle, a feature doc, and Cannabis Chronicles, a series. We know the campaign did not end on March 15, when the three films launched on streaming platforms. We are going to be working on promoting The Films of Mark Kitchell for years to come. In the end, it is about keeping our films before the public.