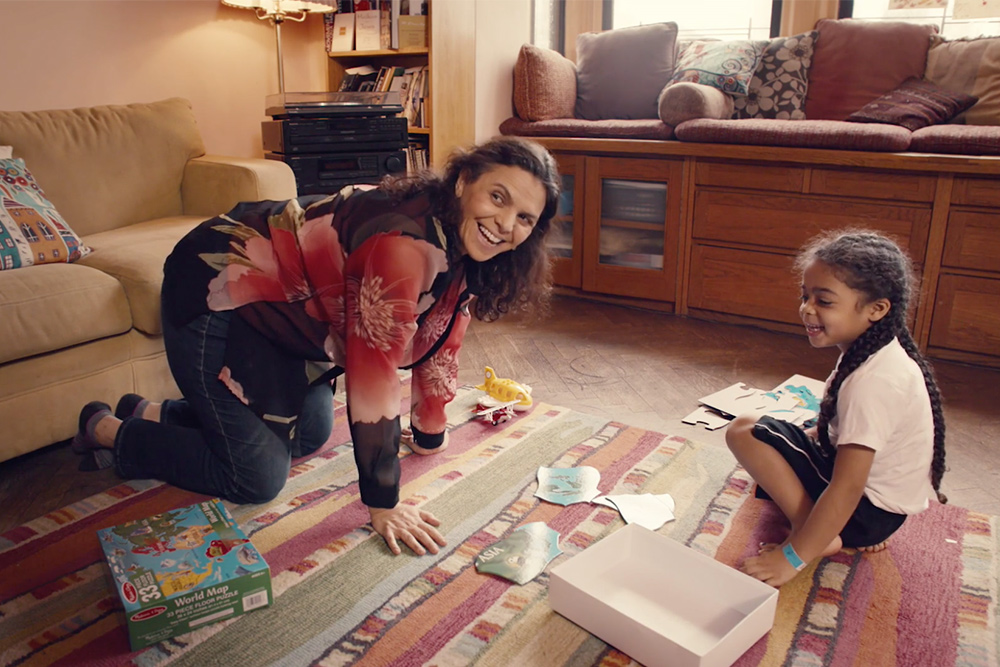 In 2016 documentary filmmaker Senain Kheshgi was approached to make a series of short films in collaboration with Save The Children, Johnson & Johnson and Facebook. It would mark Kheshgi’s first foray into the world of branded entertainment. Initially Kheshgi, who had no experience directing branded content, was hesitant. Despite being an Emmy-nominated and Peabody Award-winning filmmaker, the director wasn’t sure she would be good fit in the branded community.

"I was used to working as a one-woman show or with a very small group of people," explains Kheshgi, who has directed documentary features including Project Kashmir (2008) and The Diplomat (2013). "Branded work seemed to involve a lot people. And on top of that, I thought that they spoke a different language—branded language."

But Kheshgi, aware of how arduous it was to get her passion projects completed, decided to take on the branded gig. The result was Humankind: Short Films for Save The Children, a project consisting of four short films about refugee families living at Berlin's decommissioned Tempelhof Airport. Each episode, which aired on Facebook to millions of online viewers, provided a glimpse into the lives of refugees living in the airport who had fled their homes to seek safety from war and terrorism.

The experience left Kheshgi satisfied both professionally and financially. I learned so much and I was able to take a break, without stressing, before starting another [passion] project."

But Kheshgi wasn't sure how to continue her work in the branded content space. The Save the Children job had come about unexpectedly and without much inquiry. When she looked into branching out and getting more branded work and possibly launching a career in the commercial sector, Kheshgi quickly realized it was a male-dominated field.

In 2011, only three percent of advertising agency creative directors were female. In 2017, that number rose to 29 percent. Despite the huge improvement, the number was still dismal for an industry that relies on women. According to a Gallup global analytics and advice firm, in 2014 women in the US controlled 85 percent of all consumer purchases and accounted for $7 trillion in consumer and business spending. To add insult to injury, women make up less than 8 percent of commercial directors (USC Annenberg research).

The lack of estrogen behind the camera has had profound effects on the world of advertisements. A study conducted by The Geena Davis Institute on Gender in Media Education between 2006 and 2016 found that women accounted for just a third of all characters in ads. Additionally, men had four times the screen time of women and spoke three times more than females.

Despite an all-too-apparent need for change, breaking into the commercial and branded content space proved increasingly difficult for Kheshgi, despite her 2016 Facebook series. But in 2017 advertising industry veteran and executive producer Jonathon Ker introduced Kheshgi to Maria Smith, an executive creative director at the advertising firm M&C Saatchi. "Maria wanted to start a diverse initiative, but when I spoke about the independent film world, she was so surprised to hear that there were all of these women who were so accomplished and weren't able to break into commercials or we're having difficulty transferring those skills into commercial work."

Together, Kheshgi and Smith decided to launch a production company that featured an all-women roster of established and ascending directors. Based in Los Angeles, the production company, called Majority, launched in January 2018 and is dedicated to cultivating and amplifying the careers of women in commercial and independent film. The ultimate goal was to address the lack of diversity behind the camera in the advertising industry and create money-making opportunities for female independent filmmakers working on their own projects.

"As the leader of the creative team in charge of hiring directorial talent, I've seen first-hand the disparity that exists in the ad industry," says Smith. "Majority was born out of a need. As advertisers, we can and need to do more to create an industry that's inclusive and geared toward helping talent succeed."

In the two years since Majority entered the scene to amplify female voices in the advertising world, the company has signed on 16 directors. Veteran docu and indie feature directors like Cynthia Hill (Private Violence), Judith Helfand (Blue Vinyl), Lulu Wang (The Farewell), Ondi Timoner (We Live in Public) and Laura Nix (Inventing Tomorrow) are among the 16 women on Majority’s roster.

Thus far, Kheshgi and her team have secured 14 projects for clients with brands, including OPI, Renault Twingo, PopSockets and Tory Burch.

"Majority and I are working as a team," Nayar says. "We're helping each other in the space. Majority, of course, brings a lot to the table in terms of their contacts and their expertise in the ad world. It's a sphere that I'm newer to. So I'm interested in building my portfolio with Majority in terms of the brands that we represent and make content for."

While M&C Saatchi pays for Majority’s overhead, Kheshgi points out that the firm is part of an "agnostic agency."

"Saatchi is our benefactor, but they're not involved creatively in any other projects or in any of our day to day," Kheshgi explains. Case in point, in recent months Majority has begun presenting their roster of directors to adverting agencies including Chiat Day, TBWA, BBDO and Anomaly.

The future looks bright for Majority. The company is moving into the original content space as co-producers and/or executive producers who can come in with financing, post-production support and occasionally funds for docus as well as narratives. And in 2020, Majority will host a film lab focused specifically on women of color. (The details and application process for the lab will be announced soon.)

In addition to labs, Majority will lead workshops that will focus on teaching longform filmmakers how to create a portfolio of short-form content as well as how to break into the commercial space.

Ultimately Kheshgi says that she wants brands and agencies "to see our roster of exceptional filmmakers as independent filmmakers with unique voices who can add so much to the [commercial and branded] space."

Addie Morfoot has been covering the entertainment industry for the last 15 years. Her work has appeared in Variety, The New York Times Magazine, Crain's New York Business, The Wall Street Journal, the Los Angeles Times, Documentary and Adweek.

END_OF_DOCUMENT_TOKEN_TO_BE_REPLACED

And Now a Word from Our Sponsor: Doc-Makers Go Commercial

And Now, A Word About Sponsors: Taking the Corporate Route to Funding Your Project