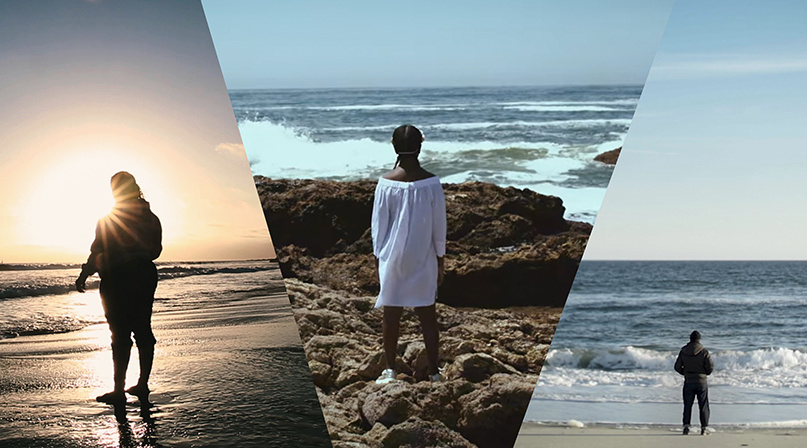 A Love Song for Latasha, the Academy Award-nominated short from Sophia Nahli Allison, opens with the rewind of a VCR tape image, a slow breath of ocean waves in front of a young black girl in a flowy dress. Narration follows from Latasha Harlins’ best friend Ty retelling how they met after Latasha saved her from bullies at the swimming pool.

You may think that you already know Latasha Harlins’ story after seeing the widely circulated media footage of the last few minutes of her life in 1991, when she was gunned down by a convenience store owner in South Los Angeles, where Allison grew up. But Allison’s documentary, also nominated for an IDA Documentary Award, brings a new history.

“Documentary relies so much on B-roll,” Allison notes. “What archival footage do we have? What does it mean when Black communities, Black women don’t have an archive or sometimes that archive is not as accessible as we want it to be? These stories are not always recorded to benefit the community.

“In realizing that someone’s life is not more important because they died, and that we don’t need to see Black trauma to understand the importance,” Allison continues, “we reclaim the visuals that we want to exist to tell the story.” By not including archival footage, A Love Song for Latasha forges a new form of documentary that connects lived experiences and allows authorship for how events and facts are presented and understood.

This innovation in visual storytelling uses present-moment documentation and animated visuals to contribute to the viewer’s experiential understanding. This pushes the audience to see how the methods in which history is shared deeply influences the lives and communities of today. “I’m creating a story for the Harlins family,” Allison maintains. “I’m creating a story for the community so when they see this, they see themselves reflected. I really want to see how the community is given something in return, how the films are not to highlight the director or the artist, but that we’re really thinking about what it looks like to make sure the community has what they need.”

Documentary filmmaking has the power to move beyond historical practices of extractive journalism and storytelling. Documentaries have the potential to be a source of collaboration, shared power and resources, where all stakeholders are agents in how any given narrative is presented.

“I was always taught that you never share footage; you never share what you’ve been filming,” Allison says. “But Shinese has had so many experiences watching her mother, the late Denise Harlins, who founded the Latasha Harlins Justice Committee. Their family had experiences with a lot of people extracting information from them, conducting interviews, and then just leaving and telling their own stories.”

With accountable storytelling, narratives are not property to be extracted. To create documentary media responsibly means bringing real value to the people in front of and behind the camera and contributing positively to their full, lived experiences.

“The documentary tradition is rooted in colonial extraction—the outside ‘objective’ observer looking in, with the intention of labeling us, controlling us, and designating our humanity on a scale of one to white,” says filmmaker Ligaiya Romero, who was a visiting professor at University of North Carolina-Chapel Hill School of Media and Journalism, where Allison was one of their students. “That colonial framework still exists in the forms of extractive storytelling, fetishizing the ‘other,’ and filmmaking based on savior-ism instead of solidarity.

“A white colonial framework is when you’re only product- or outcome-oriented, that the end justifies the means—i.e. ‘If the film is good, then who cares how we made it?,” Romero explains. “If you are looking at documentary as a tool for liberation then you have to look at the process as equally important and impactful as the actual product. You have to look if you are centering the community. Does the leadership of the filmmaking process reflect the stakeholders, the people who are directly affected by the issues, by the story, by the representation that we are going to be seeing on screen? Are you centering practices of care and consent?”

Romero, whose work includes Maia Cruz Palileo: Becoming the Moon, highlights that consent at the very least is affirmative, enthusiastic, continuous and informed. Consent requires continual, active confirmation. It necessitates that those involved have all the information to make holistically educated decisions to or not to share or act.

“I always wanted Ty and Shinese to see what I was doing,” Allison explains. “I would just share photos or rough drafts with them. I wanted them to feel heard and supported, and make sure that when they watched it that they saw Latasha, that it was authentic and honest to the stories that they told me.”

When someone at the top of the documentary hierarchy, whether that is the director or cinematographer or funder, comes in already knowing what they want to say, it inhibits honest expression to show a more truthful picture.

In her book Minor Feelings: An Asian American Reckoning, author Cathy Park Hong says of filmmaker Trinh Tee Minh Hah, “To leave the space of representation open so that, although you are very close to your subject, you’re also committed to not speaking on their behalf, in their place or on top of them: This allows the other person to come in and fill that space as they wish…By not trying to assume a position of authority in relation to the other, you are actually freeing yourself from the endless criteria generated from such an all-knowing claim and its hierarchies in knowledge.”

Accountable filmmaking underscores the given that we can never truly understand another person’s lived reality. Acknowledging what we do not and cannot truly know fully, and relinquishing a strict agenda or story we need to fulfill—these actions both allow for true collaboration with all parties on what story and perspectives should be told.

“This false notion that if you’re too close to something then you can’t possibly tell the story truthfully and honestly is rooted in colonialism; that idea of the ‘objective observer’ is rooted in the white colonial gaze,” says Romero.

“We’re usually taught in journalism or other film spaces that you need to have a certain amount of distance or else, How can you truthfully tell a story? But that doesn't always apply, and it needs a historical and systemic power analysis. We need more stories from people whose voices have been actively suppressed in order to move toward anything even resembling a ‘true story.’ It took me a long time to realize that what I was taught to see as ‘objectivity’ is actually white, male, colonial subjectivity, and that’s not recognized enough in white-led documentary spaces.”

In order to build the foundation of an honest and representative narrative, the environment and process need to match such intentions. For example, in creating A Love Song for Latasha, Allison worked to build a film crew that was representative or had connections to the community and themes of her film. This allowed for a space for transparent intentions and conversation.

The filmmaking process for Allison included spending time without a camera and getting to know the environment and people involved extensively beforehand. On set, it meant using the appropriate equipment—for example, being respectful of intimate interviews by using minimal cameras or lighting. In addition, while still providing necessary direction, there was not always a very scripted outline.

“I wanted the young girls that I worked with to not feel like they were on an actual set, but just to exist, to be,” Allison explains. “I wanted them to be as natural and authentic in themselves and not feeling like they had to perform—even thinking about what does it mean for Black women to have to perform. I didn’t want them to feel like they were trying to recreate a character, but that their own identity as a Black girl was just as relevant to the story of Latasha.”

Another filmmaker who is currently working to create her own process of transparent storytelling is Natalie Bullock Brown, director of baartman, beyoncé & me, an upcoming documentary about the impact of beauty ideals on Black women and girls. She is developing a practice to ensure that the people she interviews, including her own parents, have agency and are respected in understanding the impact of her film. “I am making sure that I am not cutting corners when it comes to who I include, how I include my parents’ voices, and being really intentional about what their wishes are and putting them ahead of the story I want to tell,” Bullock Brown explains. “That’s a part of what I have to strive for and actually be more creative, be more innovative in how I tell a story.

“It is hard work,” she continues. “You have to slow down and you can’t move as fast as I think the field is beginning to require of documentary filmmakers, especially those who want to be a part of streaming platforms. To take the time to do the introspection, to get to know and really gain the trust of protagonist, to really do the homework of making sure that filmmakers understand the issues that they are going to deconstruct in a way that is not only acceptable, but compelling to audiences: That’s going to change the way or at least work towards changing the way people think about traditionally marginalized and vulnerable communities… All of that takes work. It takes time. It takes slowing down. It takes a whole different way of thinking.”

As a strategist for Story Shift at Wilmington, North Carolina-based Working Films, Bullock Brown also works to create an initiative and framework tool for accountable storytelling. She is part of an ethics and accountability working group intent on introducing a larger framework for values-based filmmaking.

“If we can help more filmmakers shift their practice and be clearer and more intentional in their filmmaking practice, then hopefully all boats will rise and the field will have to operate to how all filmmakers are operating,” says Sonya Childress, who is working alongside Bullock Brown and others to develop this framework, and is a senior fellow with the Perspective Fund, a philanthropic organization that supports documentaries, impact campaigns and the field.

One of the possible ways that the industry can incorporate non-extractive forms of documentary is to value the filmmaking process beyond the deliverables. This includes longer timelines so that communities who are telling their stories can be more involved and collaborate in the process of forming a narrative. It requires space for introspection and time to properly assess difficult questions of hierarchy and accountability. It includes a funding landscape that incentivizes and rewards films that prioritize mutual benefits and symbiosis for the team and communities involved.

If documentary filmmaking begins to value the people involved as much as it values the final film product, then the long-term effects of relationship-building and reciprocity will ultimately lead to a more long-lasting story and sustainable society.

Yi Chen is a journalist and graduate of Wellesley College. Her work has been featured in publications such as the Boston Globe, Women’s Foundation of California, and Elastic Magazine. She was also a 2020 Documentary Magazine Editorial Fellow.

Editor's note: In this article we made an editing error that resulted in the misgendering of one of the interviewees, Ligaiya Romero, who identifies as non-binary and whose pronouns are they/them. We apologize for the error; IDA is committed to the principles of equity and inclusion with respect to the BIPOC, LGBTQ+ and non-binary and disabled communities. We have revised our fact-checking process to ensure that pronouns are properly respected.

END_OF_DOCUMENT_TOKEN_TO_BE_REPLACED

Who Is Telling Whose Story, To Whom, and Why?

Beyond Inclusion: Building Narratives of Liberation