Preparing the Audience: Creating a Safe Space for Difficult Screenings 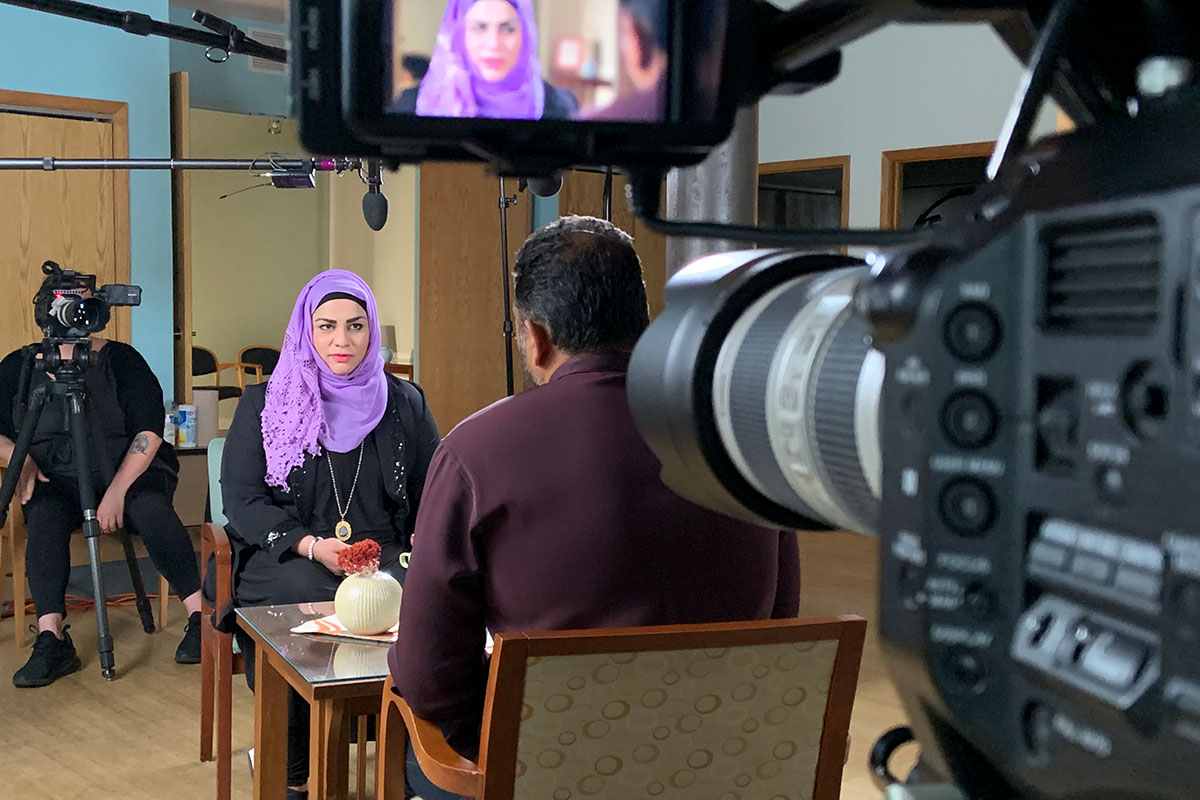 When Nick Stuart of the nonprofit multimedia company Odyssey Impact thinks back on the 2016 world premiere of Kim A. Snyder’s Peabody Award-winning documentary Newtown—which tells the story of the community in Newtown, Connecticut, after the mass shooting of schoolchildren at Sandy Hook Elementary School—he remembers a specific conversation with a shuttle driver. “We launched Newtown at Sundance, [where] the busses take people everywhere. They chatter away about what they’ve just seen. There was a bus driver I spoke to who said, ‘After your film, everyone came on to the bus in silence.’ It really dawned on us then that there was a different challenge for an audience for a film that is demanding like this. We don’t want to have people just not talk about it; we need to honor and support them as they process this.”

As a result of these kinds of audience experiences, the team at Odyssey Impact and its sister company, Transform Films, set to work creating guides and toolkits to help contextualize their films and create space for audiences to process any potential traumatic reactions. As Stuart explains, “We had a duty of care to the production team and the cast, and then as [Newtown] began to roll out into film festivals, it became clear that there was a third element that had been missing, and that was the audience.” For directors who “put their life into these films, they want [the film] to have an impact, and [they] have to be intentional about that. We have a theory of change that is sort of three steps. The first one is, Your film needs to change your awareness: ‘I didn’t know that about this; now I do.’ The second step is, Change your attitude: ‘Now I know this about this, I will think differently.’ And the third step is, ‘I am thinking differently, and I need to act differently.’ You need to help people move through and support them through those three stages.”

Screening guides like Healing the Healers: A Trauma-Informed Approach to Screening Healing the Healers and Stranger/Sister Discussion and Resource Guide not only provide suggestions for how best to extend the duty of care to audiences, but ultimately enhance the ability of films like Newtown to have a broader social impact. While there is, as Kirsten Kelly, senior producer at Transform Films, describes, “an incredible industry around impact—what to do, what are the calls to action—that is much needed,” after screenings of films like Newtown, The Rape of Recy Taylor and Stranger/Sister, “Audiences were walking out just bereft […] people were so deeply moved, and oftentimes in a way that there was silence—they couldn’t speak.” In addition, Kelly shares that in conversations with educators, they found that “educators were afraid to play these stories. Like, ‘I don’t know that I can play Newtown. We don’t know what it’s going to open up; we don’t know how to do it.’ We were listening to these conversations and talking about different screenings on projects and said, ‘Is there something we can do to help so that people feel better about making the decision to show films that we felt were really important to show?’”

In conversation with Documentary, Stuart and Kelly shared a few ideas for filmmakers seeking to support audiences at their screenings, including partnering with local organizations and trauma specialists so that audience members can access immediate support as they process emotional responses. Kelly described how, for a recent project, the team thoughtfully considered not only how partner organizations could be included, but the physical space where the screening would be held, as well as the impact of the language used to introduce the film: “The disclaimer or trigger warning is a piece of it, but it’s not enough—especially in certain films that are really dealing with this level of trauma. There are language examples [in the screening guides] of how you can introduce the film into a room, or how the lighting even can help. How, if you do some research, maybe there’s a local nonprofit who has trauma experts who could be there and walk the audience through it. We recently did a project on domestic violence, and I’ve seen this work really beautifully. Like, ‘We recognize there may be survivors or those of you who are on this journey, and if you need to get up in the middle [of the screening], there’s another room with water and coffee and food. If you need a break, we totally understand.’ Especially with the [screenings] we’ve done on campus, there are campus counselors there in the room if you need someone. You’re not just planting this in the lap of someone and walking away saying, ‘The film is the film.’”

Kelly and Stuart also note the challenges for filmmakers holding Q&A sessions after documentaries that could trigger trauma responses in audiences. “I think every director, after certain films, they take questions in the Q&A and suddenly face somebody with a really traumatic, emotional reaction,” Stuart describes. “You’re suddenly in a position where you have no experience to be able to support or answer. So we were very intentional about partnering with organizations who are specialists and would be present. I would always suggest, Think about that partnership dynamic; your film will elicit deep emotional responses. To have on hand someone who can help is really important. With The Rape of Recy Taylor, we went into partnership with the New York City Alliance Against Sexual Assault, and at the beginning of screenings we would say, ‘If you so feel, we do have on hand this specialist and they will be available to you either during or after the film.’ I think it’s really difficult for directors to face the audience and find themselves going, ‘Everyone’s looking at me; how do I deal with this emotional issue that’s just arisen?’ It’s unfair to the directors, and it’s unfair to the audience.”

Stuart also described how incorporating something as simple as a short grounding exercise can have an impact on audience experiences. “With our films, we often start with breathing exercises, and certainly at the end, before you go straight into the Q&A. You can be stunned by these amazing films and just need a moment to breathe and feel the ground beneath your feet. Thirty seconds does so much, as opposed to, ‘Well, that was an amazing film; first question, please.’” At the same time, Stuart acknowledges that even an additional 30 seconds can be challenging to incorporate when screening at a film festival. “I think one of the things we’ve all experienced at film festivals is that many things start late, and there’s another [film] to go to, so the film happens, everyone’s left feeling raw in terms of emotional impact, and there’s time for one question and then we’ve got to clear the theater. So what I would say to people who are planning festivals is, Make sure there is that space at the end [of the screening] to deal with this. Otherwise, you get a bus full of people leaving a film at Sundance who are going to spend the next hour in silence trying to work out what is happening in their emotional world.”

In addition, Kelly recommends that filmmakers work to adopt a trauma-informed viewpoint on the story they are telling, and as they consider their social impact strategy, to ask trauma-informed questions of screening hosts and moderators ahead of potential screenings: “‘How are you presenting this story? How are we getting into the panel discussions? This story may trigger or bring up things within the audience; can we address that this is difficult in a space together? Can we have some relief space and duty-of-care space?’ I think having those questions even just at the ready opens up a conversation about the way people are screening the films.”

While these steps do require additional work on the part of filmmakers and screening hosts, implementing these concepts into screenings creates the potential for not only greater social impact beyond the screening, but a transformational experience for audiences. As Kelly explains, “I believe so strongly in how documentaries, with the right kind of foundational framework, can provide tremendous opportunities for ‘post traumatic growth, rather than retraumatization.’ This is Dr. Storm Swain's powerful wording but something I've deeply held onto as we work with these films and screening hosts.” When audiences don’t feel that they will be supported in engaging in challenging subject matter, or potential screening hosts avoid showing films because they are unsure how to hold space for traumatic responses, the result, as Kelly describes, is a missed opportunity: “I often think of that space with the credits as not just reading the credits. That space is also often a healing, transformational space to come out of that story. And sometimes you’re missing an opportunity [as a viewer] when you say no, that you’re not feeling prepared; you’re missing an opportunity to have a story help heal you too. It doesn’t have to, but it has the ability to. To know that you’re not alone, and to recognize your own piece of trauma in somebody else’s story can be incredibly healing.”

Katie Murphy studied literature and documentary film at Duke University and American University. She currently works in nonprofit fundraising and resides in the Washington, DC area.