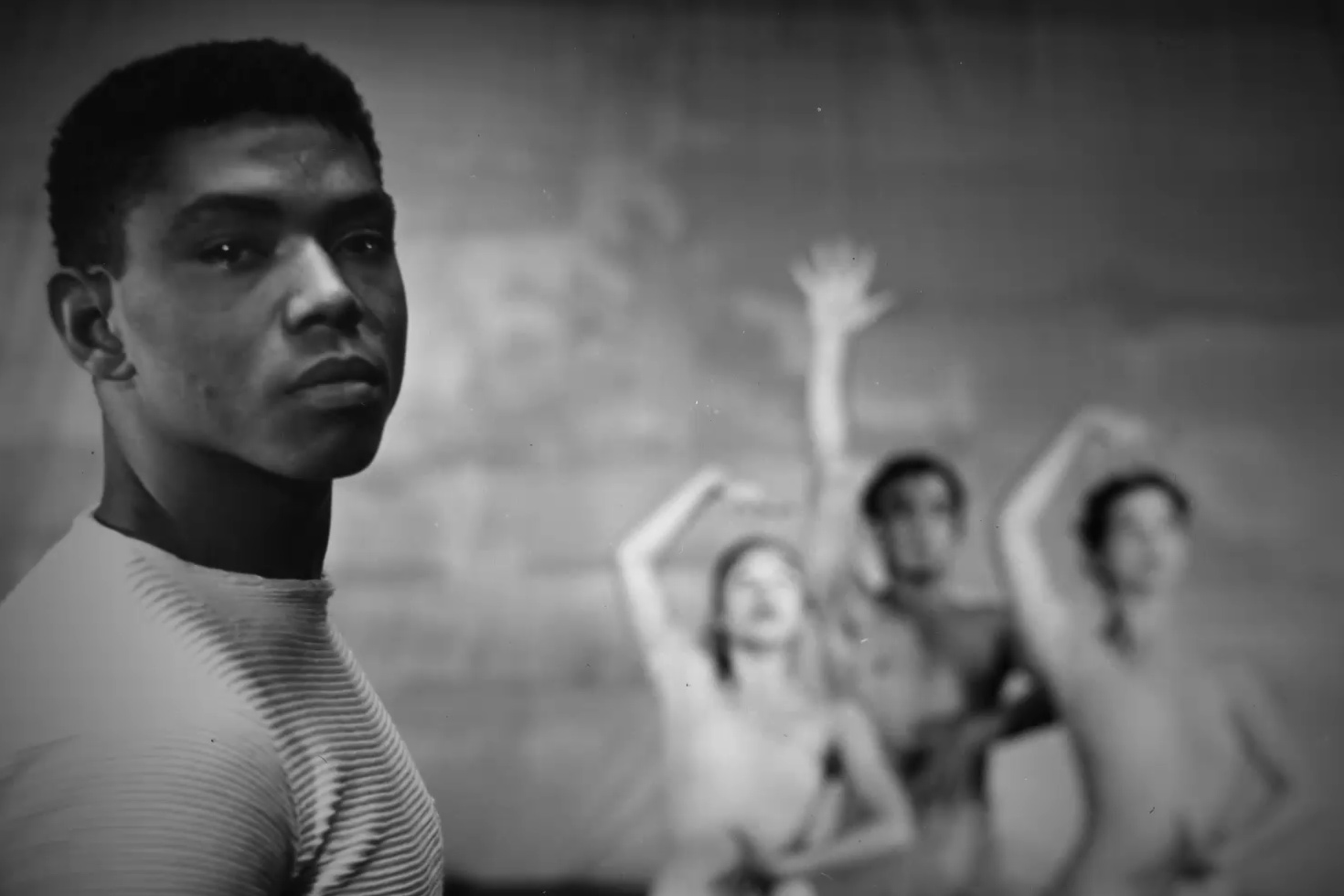 The Alvin Ailey American Dance Theater is celebrated not only as America's “cultural ambassador to the world” but for its wide array of jaw-dropping feats of resplendent athleticism, steeped in deep spirituality. But, despite the group’s many triumphs in bringing “Blackness” to the stage, the story of its founder, Alvin Ailey, remains shrouded in mystery.

Part of that is because he died 32 years ago, at the age of 58 from an AIDS-related illness. Though even before his death, the mercurial choreographic genius was a notoriously elusive man, even to those who knew him best.

That much becomes clear about halfway through Ailey, the new documentary directed by award-winning filmmaker Jamila Wignot, who has compiled a jazzy impression of the man through a combination of interviews with people who worked under his direction, scholarly research, and his own words.

As a boy, Ailey traveled from the fields of sharecropper towns in Texas to Los Angeles, where he began his dance training after being dragged to class by his best friend, Carmen De Lavallade. After a brief stint studying writing at the University of California at Los Angeles, he decamped for San Francisco―where he befriended Marguerite Johnson, before she became known as Maya Angelou, and created a successful nightclub act called “Al and Rita”―only to return to Los Angeles to rejoin De Lavallade as her dance partner.

The duo found great success for their daring performances together and were recruited by noted theater director and choreographer Herbert Ross to dance in his Broadway production of the Harold Arlen and Truman Capote musical, House of Flowers, which also starred Diahann Carroll, Pearl Bailey and Geoffrey Holder.

Barring his Texas origins, introduction to dance training by De Lavallade or their partnership, almost none of these facts appear in Ailey. Rather, as presented by Wignot, the documentary eschews a by-the-numbers, book-report style that one often encounters in more traditional biopics, to focus instead on Ailey’s artistic life.

In an interview with Documentary, Wignot notes that this was purposeful. She reveals that despite numerous influences, this focal point was set early in the production process by the decision “to feature this man's artwork.”

“He matters to us because he made art,” she says. While balancing the desire to know “who he is,” or “what is his point of view,” Wignot came to see that Ailey had to operate “all in service of understanding him as an artist.” And the best way to understand a man who is no longer present to speak for himself is by listening to his own words.

Nine months before he died, Ailey began a series of recorded interviews with A. Peter Bailey, a former editor of Ebony Magazine, who served as a founding member of Malcom X's Organization of Afro-American Unity as well as the editor of the group’s newsletter, Blacklash. Those conversations evolved as a compromise with Ailey, who, according to Bailey’s introduction in the resultant work, Revelations, frequently directed him to speak to other people about himself.

"We wanted the film to have the same kind of quality that you have when you go to an evening of [Alvin Ailey American Dance Theater]: a sense of the journey.”

In addition to following this directive, Bailey left his tape recorder with the choreographer’s mother, "in case Alvin wanted to say anything." While laying on his deathbed, Ailey began to speak without filter, delivering pointed assessments of the most important people in his life that waxed between generous praise and cutting denouncements.

In addition to her background research—which began in 2017 after gaining the trust and blessing of narrative independence from the Ailey organization―Wignot says, “Those audio tapes became the foundation of the film in that there was a kind of fragmented way in which he's telling stories.” Calling his words “poetic,” Wignot reflects that at that point in his life, Ailey was “in a process of transportation. You know he's remembering these experiences and then it's as if you've gone back with him to those fields in Texas or to seeing the Ballet Russes; there's a way that the tonal quality he had in telling those stories is so distinct from the public interviews. It's much more impressionistic, and not so much about the details of every little thing that leads to every other thing.”

As a documentary, Ailey operates similarly, Wignot says, because “We wanted the film to have the same kind of quality that you have when you go to an evening of [Alvin Ailey American Dance Theater]: a sense of the journey.”

In choosing this sojourn, Wignot filmed the creative process of creating a new ballet with the Ailey dancers of 2018 as they worked with the award-winning, hip-hop and modern choreographer, and inaugural company artist-in-residence, Rennie Harris. Throughout Ailey, audiences see Harris coaching Lazarus and speaking about the story of Ailey’s life as an inspiration for his ballet.

In that regard, these sequences between Harris and the company’s dancers pay homage to the fact that Ailey wanted his space to serve as a vehicle for numerous choreographic voices, rather than focusing solely on his own. These scenes also stand in for Ailey’s creative process by proxy because, as Wignot explains, “Unfortunately, there weren't as many films made of him in rehearsal.”

When rehearsal footage of Ailey is shown, he seems preternaturally aware that the camera is present and that he is expected to put on a performance. That is what makes the juxtaposition of his voice over the archival film footage that Wignot selected to evoke episodes from his past so surrealistically authentic. The camera was not there to see Ailey as a child, but hearing his own words in tandem with these clips of people who could have been his family approximates a semblance of vulnerability that was absent from any of the great man’s public appearances.

This revealing presentation of Ailey is not as complete as it could be. As Wignot notes while speaking about the audio and her decision to include or omit certain pieces of material that she had access to, “I think [Ailey] chose to not discuss certain things, and A. Peter Bailey didn't ask certain things. So we have a record of Ailey’s life as he chose to describe himself. I think that's really interesting with historical figures and the challenge of biography, and it's partly why I think of this film as kind of a portrait rather than a kind of reported biography.”

This approach left out key salacious points about Ailey’s life, such as his heavy drug use, public mental health struggles, or problems with finding reliable romantic partners. In commenting on this decision, Wignot admits, “I really wrestled with the ethics of,―If Mr Ailey could walk into the room and watch this film, would he feel it was honest?”

"Movement is the first language we have and so I would love it if [Ailey] could be an entryway for people into the world of Alvin Ailey and hopefully beyond.”

“That was always guiding me,” she continues. “I've made vérité films with people who are alive and they will always have the benefit of refuting what's in the film or speaking for it. So it's not, Make a film where we aren't presenting an authentic and honest portrait. It’s, Make a film so that you know the person can say, ‘I really didn't want people to know that is who I am and you had to put it in there and it's okay.’ It’s almost [like] sitting with the ghost of the person with you the whole time that you're making it.”

By immersing herself within Ailey’s artistic process, Wignot helps to push past the god-like aura that has long permeated his mythology. This was by design. She reflects that her own experience with seeing the Ailey company perform while she was still in college, helped make dance, as an art form, more accessible to her—just as Ailey was able to connect to it for himself after seeing Katharine Dunham’s company perform when he was a child.

“It’s the thing that Rennie Harris says,” Wignot continues. “Dance eludes people,” especially in this country where it's not as well resourced or accessible for the masses, but it is something we all do. Movement is the first language we have and so I would love it if [Ailey] could be an entryway for people into the world of Alvin Ailey and hopefully beyond.”

Having sat with Ailey’s ghost for more than three years, Wignot has delved deeper into his history than most people will ever have the opportunity to. But she reveals that if he were able to converse with her today, the one thing she would have liked to have talked to him about is, “the intimacy that he doesn't seem to have been able to create for his own personal life. There's this generosity and endless giving of himself that you feel, and then the need to retreat. I'm curious about those moments. And also, I’d just want to sit with him; spend some time in a chair next to him, maybe not speaking, [but] absorbing energy.”

Fascinatingly enough, by directing Ailey as a lovingly ephemeral impression, Wignot has offered what she wants, to her audiences.

Ailey is now showing in New York City theaters through NEON, and will expand nationally on August 6.

Juan Michael Porter II is an award-winning staff writer of TheBody.com, as well as a contributor to TDF Stages, Token Theatre Friends, Christian Science Monitor, American Theatre, Into More and SYFY Wire. He is a National Critics Institute and Poynter Power of Diverse Voices Fellow.

END_OF_DOCUMENT_TOKEN_TO_BE_REPLACED

Doc Stars of the Month: Nunu and Patrick Hogan, 'Through the Night'