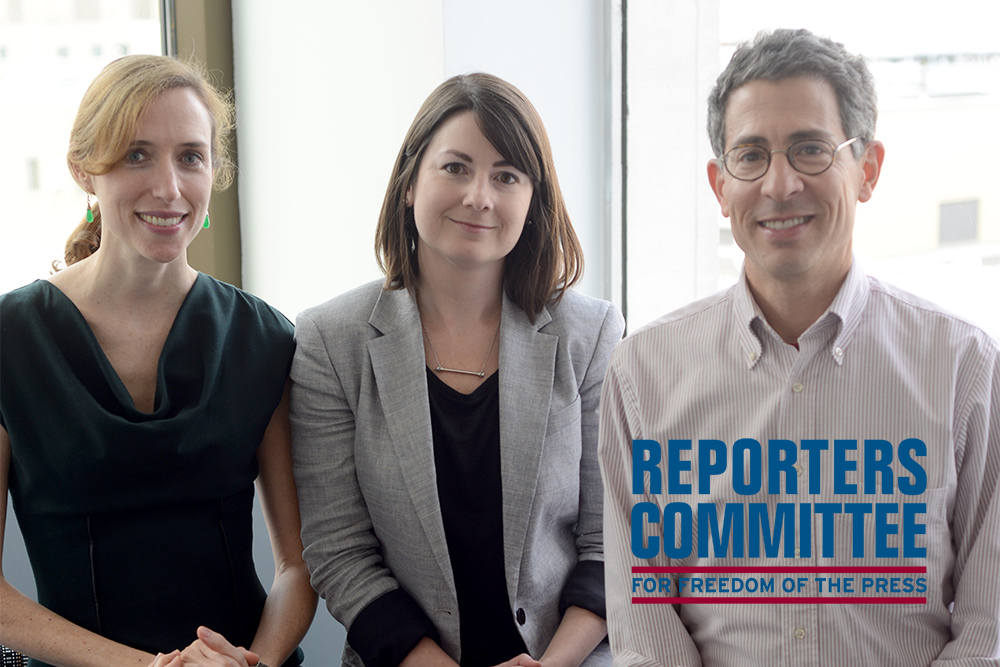 We most often associate the radical activism of the 1960s and 1970s with people of color,  students, women and veterans organizing to make systemic change. Not unrelated to those movements, that period was also a defining one for journalists. The courts solidified First Amendment rights in key cases like New York Times Co. v. Sullivan (1964) and New York Times Co. v. United States (1971), otherwise known as the Pentagon Papers case. And, in an unusual move in 1970, a group of journalists organized to defend their right to protect confidential sources. Bringing together a network of attorneys, they sought to legally defend themselves against government overreach and suppression. They called themselves Reporters Committee for Freedom of the Press, and nearly 50 years later, RCFP is as relevant as ever, as the federal government has ramped up legal actions, information secrecy and open hostility toward journalists.

In legal terms, "amicus" means "friend of the court," making the Amicus Award a natural fit for honoring RCFP. The organization weighs in on upwards of 50 cases per year with an eye toward positively impacting news-gathering case law, such as asserting that access to police body cam footage is essential to accountability journalism. In addition, RCFP has fought for the release of documents that would make transparent the FBI’s practice of impersonating journalists and documentary filmmakers. And, in a major turn in recent years, RCFP has also focused its resources on supporting documentary filmmakers: defending our rights to access information, helping us navigate thorny legal and ethical questions, and making a case that we do the same work as journalists working in the public interest, even if we have a point of view.

To reflect on RCFP's critical contributions and evolution over the last 50 years, Documentary spoke separately with Executive Director Bruce Brown and Legal Director Katie Townsend. Below are portions of our conversations, edited for clarity. In the interest of full disclosure, Katie Townsend serves on the IDA Enterprise Documentary Fund Advisory Committee, and RCFP works with Enterprise Grantees on a case-by-case basis.

DOCUMENTARY: The parallels from the early 1970s to now are striking. Can you talk about the legacy of RCFP's founders banding together to protect their rights?

BRUCE BROWN: We do have parallels with the 1970s, including an embattled president who's attacking the press and facing potential impeachment, and one of the things that we very much want to reclaim at the Reporters Committee is that in the 1970s, compared to today, you generally saw a deeper public appreciation for the work of journalists.

Right after Watergate, as fans of cinema history will attest, there was a great string of movies, beginning with All the President’s Men, that truly extolled and made heroic the work of those reporters in that era. Today the attacks on journalists have been so toxic that it’s hardly surprising that the public has seized on a different image or a different view of journalists.

And one of the things that we are working on at RCFP, which is different for us—we're lawyers and we've always had programing that’s focused exclusively on the legal protection of the press—for the first time, we are launching our own public messaging campaign around press freedom because we think it’s important to be engaging the public on issues around protecting the First Amendment, access to information and peoples' right to have choices and to have a free flow of information.

D: What do you see as the critical work of RCFP?

BB: For a long time into the '90s, the major work of RCFP was around free legal guides and what became free online resources for journalists, media lawyers and members of the public interested in freedom of information. And we did a lot of work in those decades around friend-of-the-court briefs, where we would provide a vehicle for the industry to come into a preexisting or a pending case involving a journalist or a news organization. And we still very much do that kind of amicus work in a high-profile way all around the country, from the US Supreme Court to trial courts. That remains key work for us, but in the last five years, under Katie Townsend's leadership, we also started our litigation practice, where we are now providing direct representation to news organizations and journalists in a wide variety of cases, ranging from access and freedom of information to subpoena and libel defense.

The reason for that pivot is multifold. On the one hand, we've seen the historical and economic contraction around the newsrooms and the diminished resources that organizations have today for legal support. Often the first area to be hit is the area of access and freedom of information; those kinds of cases are so important to local audiences. They need to have their news organizations with a capacity around information access and to be fully informed as to the conduct of local government, the doings of the local political and business communities, the school board—the full range of local concerns that readers and viewers have today. Particularly at the smaller publications, the capacity to continue that kind of offensive work has truly been diminished.

At the same time, we saw a growth in nonprofit news organizations, but they often don’t have the kind of institutional support around legal that they need to establish themselves as sources of information in their communities. So RCFP sees an opportunity to find clients who need that kind of really fundamental legal support for their newsrooms. We balance the needs-based cases with impact cases.

D: Tell me about RCFP's litigation work and how it determines potential impact.

KATIE TOWNSEND: We think of impact in terms of making impact on the legal atmosphere—so, whether we're going to be able to make good precedence and establish good law that will benefit journalists and filmmakers. We also look at impact in terms of the information that we're trying to get and the benefit to the public of disclosure of that information.

A lot of the work that we do is in the area of court access and access to judicial proceedings and records. We won one of the leading cases that went up to the Seventh Circuit in support of the ability of district courts to provide public access to grand jury materials in historically important cases. That was the case that involved records from the 1940s related to the Battle of Midway. [At the time, using the Espionage Act,] the government had actually attempted to get a grand jury indictment of a member of the mainstream media, a reporter at the Chicago Tribune, for reportedly publishing classified information about how the US government knew the Japanese military plans for the Battle of Midway. So it was a really fascinating historical instance that has a lot of resonance today.

D: What led RCFP to start working with documentary filmmakers?

BB: We see the news-gathering work of filmmakers as essential to rounding out the services that RCFP offers. Today, audiences are so fortunate to have many different ways of consuming and obtaining high-quality storytelling, and some of the best storytelling is coming out of documentary films, for sure. And we felt it was very important that RCFP serve as a bridge organization between the film community and the journalism community.

KT: Before I came to the Reporters Committee, I worked primarily as a media and entertainment lawyer. Maybe this is very simplistic, but I love documentary films, and when I came here I realized we weren’t speaking to [filmmakers] directly. I recognized that there’s some incredible journalism that's being done by filmmakers, and I thought to myself, this is a group of journalists that could use our services.

One of the things that we've learned is that documentary filmmakers, most of all, need front-end help in terms of evaluating what their legal risks might be. A lot of journalists come up through environments where they may have gone to journalism school and have been forced to take media law, or they worked in a newsroom with a culture around the law protecting journalists, which I don't think that a lot of documentary filmmakers have the benefit of.

We're working with [IDA] Enterprise [Documentary Fund] grantees who are implementing journalistic practices but are also highly skilled filmmakers working on amazing projects, and we're able to come in at the beginning and work with them throughout to help identify what some of their issues are. Some of them have access issues, and we can talk those through and even help them move to unseal information. We can also help them identify areas of potential risk so they can reduce that potential risk, which ends up making their lives easier. It reduces the possibility that they get sued, but it also kind of smooths things out for them as they look forward to distribution and to getting insurance and all those fun things that filmmakers have to deal with.

D: Sometimes filmmakers don't view themselves as journalists; how can we get beyond this perception?

KT: This is something I try to drive home whenever we're talking with filmmakers. As a legal matter, it doesn't really matter what the label is, right? How you define journalists is basically the practice that you're engaged in, and that's true in how the law recognizes people. So you might have a so-called reporter's shield law that can help protect a reporter's confidential sources or work products, but those laws apply to documentary filmmakers too, and it doesn't matter whether or not that documentary filmmaker wants to fully take on the mantle of journalism. If they’re an independent filmmaker, then the law allows them to take advantage of those protections, because what they’re doing is the same thing: They're gathering information and they’re editing and then they’re distributing it to the public.

I don't need any documentary filmmaker to say, "OK, fine. I’ll start calling myself a journalist"; that's not really the point. The point is understanding how these laws view the work that they do, and how courts view the work that journalists do and when it is advantageous to you as a filmmaker—and it often is— to be able to rely on some of these protections.

D: Is there anything else you would like us to highlight for our members?

We live in a borderless world now. A filmmaker in San Diego whose producers are in Austin, who did most of her interviewing in Vermont, may face a legal action somewhere else. So how do we help filmmakers in those situations find real resources?

Carrie Lozano is the Director of the IDA Enterprise Documentary Fund.