Arab Docs at the Berlinale: Straddling between Fiction and Non-Fiction 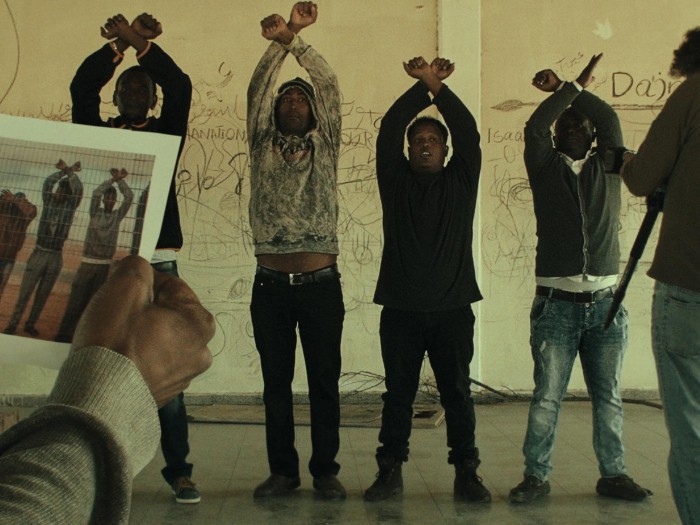 History is often fragmented, patched with fictions and intricate inconsistencies. This year's International Forum of New Cinema—in short, the Forum—founded in the 1960s as a more politically and socially conscious counterweight to the Berlinale's Main Competition, traversed the cinematic landscapes of (geo-) political and personal histories of place.

One focus of this year's Forum was the Middle East, a region in flux that is no stranger to civil wars. The Arab film scene has been burgeoning despite war seizing the Middle East, nation states disintegrating and funding sources coming to a standstill. The main program of the Forum showcased 44 films, including a dozen from the Middle East, stretching from Egypt to Syria. Documentary and feature films sat side by side, straddling the fine line between fiction and nonfiction. In the feature film In the Last Days of the City, a recipient of the Caligari Prize, Egyptian director Tamer El Said expands the cinematographic sense of the art of staging in conveying the universe of a city on the verge of a revolution. In the documentary Houses without Doors, Syrian-Armenian director Avo Kaprealian blends fiction with archival footage to create a portrait of his (mainly Armenian) neighborhood, where daily routine takes turns with the occasional uproar venturing onto the streets of Aleppo. Kaprielian took the discussion further at the Berlinale's panel "No Time to Remember: Films on the Move," where he elaborated on the cinematic representation of displacement, which refuses sentimentality.

Films that go beyond the filmic dramatization of flight or deportation were of particular interest here. Avi Mograbi's Between Fences (Israel/France), Jumana Manna's A Magical Substance Flows into Me (Palestinian Territories/Germany/Great Britain) and Mayye Zayed's A Stroll Down Sunflower Lane (Egypt) refashion the documentary representation of the subject matter by turning to the creative avenues of expression and blurring the boundaries between the real and imaginary. The latter film was showcased as part of the Forum Expanded, a more versatile and open-form section of the Berlinale that presents films and videos along with installations and performative works.

Between Fences had its world premiere at the festival. The film, made in collaboration with the theater director Chen Alon, negotiates the Israeli narrative by incorporating theater within documentary. During the Q&A session after the film screening, Mograbi made an acerbic comment on Israeli history and its current stance toward the refugee crisis. "Israel supported the founding of the 1950s' Refugee Convention to help the Jews flee Europe in the postwar period. Now Israel seems rather sorry for not having added an asterisk when defining the term 'refugee' and limiting it only to the Jews." By making this film, Mograbi deploys drama to bring about political and legislative change (hence, the term "Legislative Theater") and compel the Israeli public to recognize the current refugee situation as one of the defining chapters of their own history. 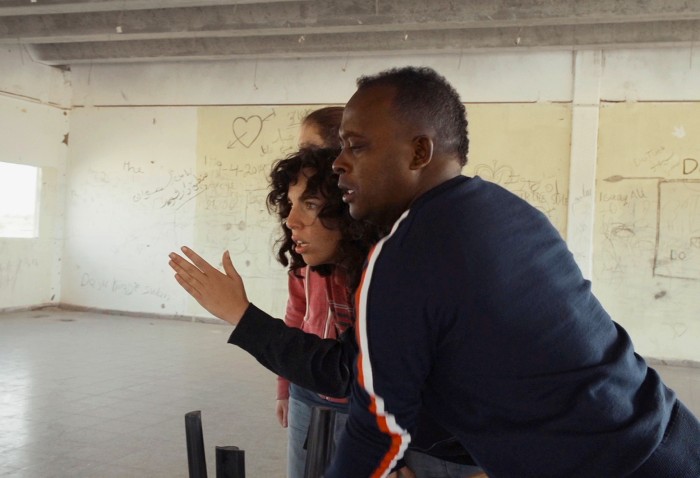 The film documents theater workshops in the Holot detention facility near the Egyptian border, which houses thousands of rejected asylum seekers whom Israel officially designates as dangerous infiltrators but is unable to deport due to the country's policies. By bringing theater workshops to the detention center and capturing rehearsals on film, Mograbi creates a space of belonging that had been lost to the detainees. The reality of not belonging was once described by Palestinian poet Mahmoud Darwish as being in between (fences) because "one cannot enter and one cannot go out." In the Holot detention center, asylum seekers coming mostly from Eritrea and Sudan are cast in the role of the "present-absent aliens," who are away from home but not yet in Israel.

Mograbi's motives seem to correspond with those of Darwish, who used art to honor the dispossessed. Mograbi, too, encourages African asylum seekers to "be present in absence." Of that remark, Mograbi notes to Documentary, "You may hand out food, but you cannot hand out dignity." By facilitating the creative relations with the African asylum seekers-turned-actors, Mograbi and Alon offer space for them not only to enact the designated roles but also to direct some of the scenes, thus claiming ownership of their stories. As the theater project unfolded, Mograbi started probing the bounds of drama by involving the Israeli men and women in the Holot theater troupe and assigning them the role of African refugees who are trying to cross the Israeli border. "It was challenging to form a stable group when we started off," Mograbi confides. "For many, theater is not a life-saving solution in times of despair, but it does have the potential to make you reflect and ultimately empathize. It is essentially an empathy exercise."

Mograbi explains that the idea to center the film on the principles of Brazilian dramatist Augusto Boal's Theatre of the Oppressed was not present from the start. It came to life through his collaboration with Alon, whose visionary take on drama has influenced the filmic language of Between Fences. By filming theater in a hall formerly used for military training, the director draws attention to the African asylum seekers who are often "mere shadows" on the streets of Israel. By using ordinary objects such as plastic chairs and worn-out rugs, he brings to the fore the detritus from their daily life. Placed at the center of the otherwise vacant wardroom, these objects deny the beholder the opportunity to veer off from the raw emotion of drama of displacement. Following the principles of theater, the film approaches bodies as a medium of transference and as a place of resonance. Some actors are seen sculpting their own bodies as static images that surface the internal feelings of angst and despair caused by forced migration and discrimination. These sculptures are generally portrayed within the spaces the actors have carved out for themselves. The resulted sense of stage-ness brought about by the conventions of theater and notions of sculpture does not undermine the truth factor of the documentary. In fact, it re-examines the intensely personal experiences of flight and discrimination in a dramatically new way.

The sculptures are never mute; they are containers of sound that allow for the assertion of their "presence in absence." Although music stands in the hindsight of drama in Holot, it is not subordinate to it. Theater is often accompanied by harrowing, re-echoed sounds that seem trapped between highs and lows, escaping at times but never quite arriving. Mograbi explains that the film's composer fractured and reiterated the lyrics of old Hebrew songs, which were then sung by the African asylum seekers. Their performance captures the characteristic local voices the Sudanese and Eritrean asylum seekers may have added to their singing to regain memories of their homelands and assert their presence in Israel. Music in Between Fences is also used to create social bonds with others in the foreign land. Mograbi notes that while African asylum seekers were free to sing old Hebrew songs in the style of their own choosing, the change in tone required a collaborative process and a physical proximity to others. 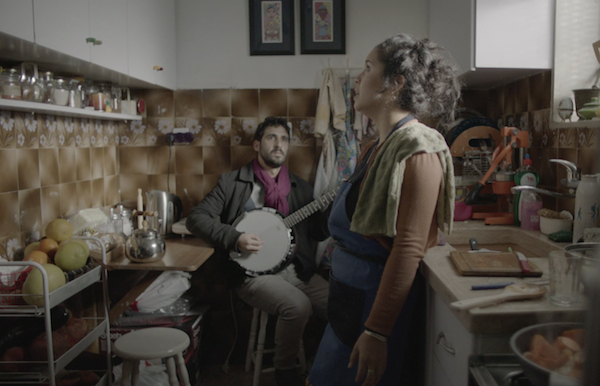 In A Magical Substance Flows into Me, Palestinian filmmaker Jumana Manna turns to music to negotiate the past and present of her homeland. By revisiting music from a radio program that took place before the segregation, she exposes how the separated communities are historically and traditionally interwoven. Shot in Israel and Palestine, Manna's film refuses to mark borders of where one ends and the other begins, thus sabotaging the very logic of borders. Nevertheless, the film does not shy from the complexities of the place, its futilities and intrinsic impossibilities. In a recent interview, Manna acknowledged that the two-state solution is "no longer realistic or appropriate"; therefore the film does not propose a bi-national solution, but offers a space where "another" Palestine can be imagined.

Manna engages musicians of diverse ethnic groups within the geographic space of historical Palestine. In the film, music both transcends boundaries and defines ethnic identities in relation to those boundaries. According to Manna, music has the ability to both "hide and reveal politics at the same time, almost like a masquerade." By employing music, the film thus adds another layer of meaning that allows for a more nuanced understanding of the contested land. In the documentary, grand political discussions go hand in hand with the daily routine. Even in the moments of difficult political conversations that touch upon the topic of exile and the impossibility of returning home, there is a tenacious feeling that life goes on, and music is almost always present. 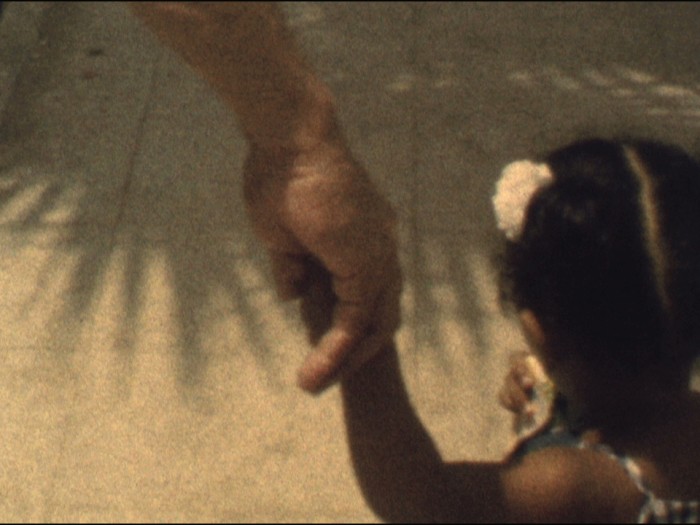 Memory lies at the heart of Mayye Zayed's A Stroll Down Sunflower Lane, which screened as part of the Forum Expanded section. Perched on the brink of fiction and drama, A Stroll Down Sunflower Lane reconstructs memories and navigates the past of an Egyptian family between the real and imaginary. In an interview with Documentary, Zayed shares a memory of her grandfather taking her for a walk down the sunflower lane, while her family denied that such a lane ever existed. Zayed's cinematic endeavor "to bring to life pictures that were never taken" and reconstruct of what is left of her childhood memories poses intriguing questions about her past: "Maybe the sunflowers we have always seen on our way back home were never really there? Maybe the memory was a dream—or maybe not?" The film canvasses the idea of remembering by interweaving archival footage with staged scenes and re-enactments involving both actors and Zayed's family members. By capturing fictional images on VHS and Super8 to approximate the aesthetics of home movies, Zayed stretches the notion of fiction in documentary. The tension between the real and staged persists throughout the 14-minute film, without settling for a resolution or release. "Even the sunflowers that appear in the film were not real," Zayed chuckles. "The art director had to fix them up." Occasional blunders and the confusion between the real and imaginary did not intimidate Zayed. In fact, she appreciated the ambiguity as it provided room for a playful and uninhibited exploration of her past.

Sevara Pan is a Berlin-based film journalist and writer. She previously wrote for the leading European Documentary Magazine DOX, an initiative by European Documentary Network, and worked on the award-winning Pipeline (dir. Vitaly Manski) and The First Sea (dir. Clara Trischler).

END_OF_DOCUMENT_TOKEN_TO_BE_REPLACED

Witness to Revolution: Eastern Europe Comes to the Berlinale