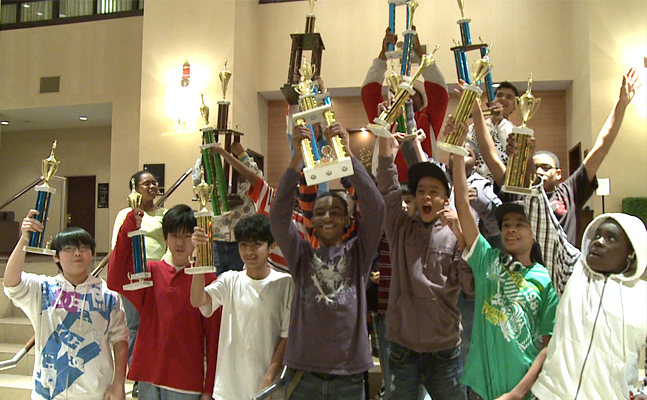 Earlier this year I travelled to Israel and the Palestinian Territories with the American Film Showcase (AFS), a cultural diplomacy program sponsored by the US Department of State and managed by the USC School of Cinematic Arts, with IDA and Film Independent as partners. The showcase brings American films to audiences worldwide. As part of our outreach efforts, we've been using my film Brooklyn Castle, which follows middle and high school chess players from a lower-income section of Brooklyn, to support quality afterschool programs like chess, and I'm proud that the film has had some significant impact in doing so. But this was my first opportunity to travel with the film outside of North America, and I was hoping it would move people on the same emotional level I've seen here at home. This was also my first trip to the Middle East, so I was ready to soak it all in.

I was fortunate to be travelling with Rachel Gandin Mark, the AFS program administrator. Rachel, who lived in Egypt for a number of years, gave me a crash course in regional politics as we toured the sights of the Old City of Jerusalem, including the Wailing Wall and Via Dolorosa. We saw the majestic Dome of the Rock in the distance, but as non-Muslims, we were not able to visit it.

I learned more about the Israeli-Palestinian conflict on this five-day trip than I had learned in the last five years. Each car ride with our US Embassy hosts was an opportunity to ask lots of questions, like why Arab-Israelis are not part of the Israeli Defense Force, what areas fall within the Green Line, how everything changed after 1967...and why Israeli coffee is so tasty. My brain was firing at high speed with all of this new information (and the coffee). But after each screening—and each discussion, conversation and meal—Israel seemed simpler.

Our first screening was at the Youth Development Resource Center (YDRC) in Al-Bireh, a town next to Ramallah, in the West Bank. We travelled in an armored vehicle with Michelle Dastin-van Rijn, from the US Embassy Tel Aviv, and Bob Davidson, a program director for USAID West Bank/Gaza. USAID partnered with the YDRC in the West Bank to create Media Centers for Palestinian Youth because, as Bob told us, there are many young poets and filmmakers in Palestine who have stories to tell about their communities, and these stories can be positive tools for change and a means to lift young people out of what can seem like unmalleable circumstances.

I had an eerie feeling as we passed through checkpoints on our way to the West Bank. Armed soldiers lined the streets on both sides of the Green Line, and ugly barbed wire dotted the otherwise pretty landscape. Then we arrived at our destination and our hosts welcomed us with big smiles and hearty handshakes. They also served us an incredible spread of hummus, falafels, baba ganoush, pita, pickles and more. We felt right at home.

We screened Brooklyn Castle for 80 young Palestinians who are interested in pursuing careers in media and filmmaking, many of whom have already produced or directed student films of their own. One of the most endearing characters in the film is Pobo-although some of his one-liners were lost in translation in this screening, I don't think anyone misunderstood how much he cared about his school or his classmates. The American Dream that our characters pursue is not the same dream that the Palestinians teens have, but who can't relate to being 13 years old and dreaming?

The students told us they really appreciated the time we took to meet and talk with them. The movie got them thinking about different kinds of filmmaking techniques and storytelling devices that they might use in their own films. Spending the day in such a lovely center, with such positive energy, you can almost forget the difficulties these young people face—until you load back into the armored vehicle and pass through the checkpoints, heading out of the West Bank and back into the vibrant, bustling city of Tel Aviv.

Later that day, we screened Brooklyn Castle in Holon, a suburb just south of Tel Aviv. The screening was presented by the State of Minds Film Festival, the first film festival of its kind in Israel devoted to American independent cinema. The goal of the festival is to facilitate a "meeting of minds" between the United States and other countries. The audience was Israeli-Jewish men and women, mostly over the age of 50. They had some very interesting questions, like whether the kids in the film were victims of the American Dream and if the teachers ever pushed the kids too hard. I enjoyed fielding these questions because that's exactly why AFS exists—to spark discussion and understanding.

Since educators are a core audience of Brooklyn Castle, the US Embassy Tel Aviv arranged a screening for over 30 multicultural educators from across Israel, all of whom work to promote the integration of immigrant children in Israel. We discussed the stereotypes that exist in America around urban public education, and I described the positive impact afterschool programs were having at high-poverty schools like IS 318. After I screened one short film clip, the educators enthusiastically related the success of the IS 318 chess team to similar success stories in their own schools; they also appreciated the tremendous difficulty in keeping these extracurricular programs afloat.  Many in the audience wanted to set up screenings at their own schools.

That same day, we travelled an hour north of Tel Aviv to screen the film in the port city of Haifa. Haifa is one of five multicultural "mixed" cities in Israel where Arab-Israelis and Jewish-Israelis peacefully coexist. The venue was Beit HaGefen, a Jewish-Arab cultural center that hosts activities promoting equal coexistence. The theater was packed with tiny young chess players who sat quietly and attentively throughout the entire film. Afterwards they were eager to share their favorite chess moves with me, and take lots of photos. One boy proudly declared that he was going to be a master like Justus Williams (a character in Brooklyn Castle) one day. His chess instructor told me that some of these kids may not speak the same language, but they can watch a film together, and then shake hands and play chess. That was exactly what I was hoping to hear.

Over the course of five jam-packed days, we screened Brooklyn Castle for over 350 people, ages five to 75, in Al-Bireh, Tel-Aviv, Holon, Haifa and Jerusalem. In each city, I glimpsed Israel's spectacular beauty, as well as its many complexities. The cuisine, the language, the architecture, the stories, the people and the religion are beautiful. But with this beauty comes a whole host of complications. The history, the politics, the conflict and the challenge of determining who governs the various parts of the Palestinian territories and who can travel where can be a mind-bending puzzle.

Israel is a collision of modernity and antiquity, conservatism and liberalism, integration and segregation. It makes a deep impression and leaves you asking questions. And that's what the American Film Showcase does so well: It encourages you and your audience to question each other, which is a really effective way to create meaningful, cross-cultural connections. I don't think the film moved people in the same way I've seen in the US; the impact it had was unique to the needs of Israel and the West Bank. I was still left with many questions, but that's not a bad thing for a documentary filmmaker to have.

Katie Dellamaggiore is an American Film Showcase envoy and the director/producer of Brooklyn Castle, which won the Audience Award at SXSW in 2012 and was recently broadcast on PBS' POV series.

END_OF_DOCUMENT_TOKEN_TO_BE_REPLACED

A Film Festival Like No Other: The Flaherty Explores Ways of Seeing

Documenting the Movement: California Newsreel Remains at the Center of Social Change