Creating a New Familiar: Film Festivals in the COVID Era 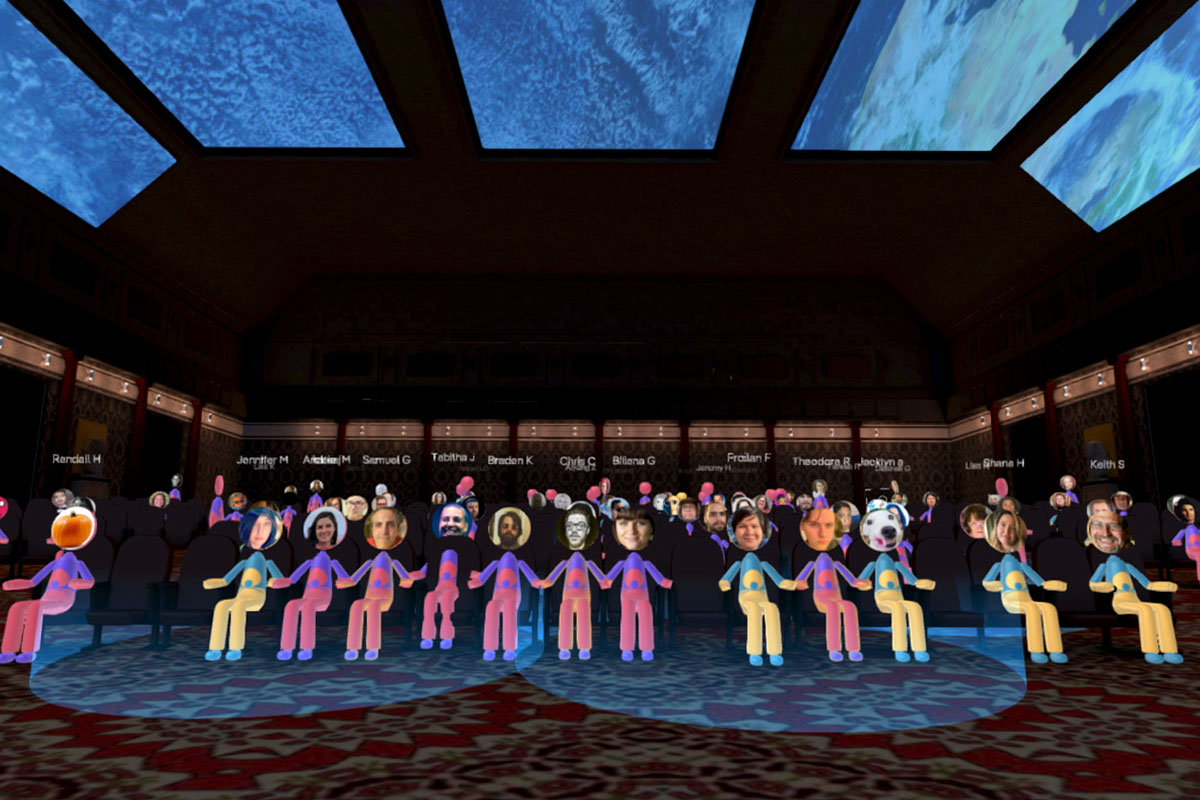 Swedish filmmakers Maria Loohufvud and Love Martinsen’s children had friends over when they received an email from the Sundance Film Festival programmers. The couple was nervous. “What could they possibly want to know?” The programmers had some questions regarding their submission Calendar Girls and would call within a half-hour. The first-time filmmakers put the kids in front of the TV and braced themselves. “The only question we have is, Do you want to be in the World Cinema Documentary Competition?” Corks were popped, oysters were shucked, and ice cream was devoured with the news that Loohufvud and Martinsen would premiere their first film in competition with their fellow Class of 2022 filmmakers at Park City—that is, until all in-person events were canceled two weeks before the start of the festival, due to the latest spike in cases of COVID-19.

A film festival premiere is not only an honor for filmmakers but also a way to celebrate “some of the most important work that we've done in our lives,” says Mike Gassert, whose documentary The Last Out was part of the canceled 2020 Tribeca Film Festival. Blindsided by the first wave of COVID-19, Tribeca awarded the films in competition, but offered no public premieres. “It was that quiet sadness and grieving that takes place over months, now years,” adds Sami Khan, who co-directed with Gassert.

In the halcyon days of early 2020, the pandemic was something many thought would be a mournful blip on the start of a new decade. Few anticipated the variants that would remind us that a return to a pre-COVID-19 “normal” world remains quite a few acts away. Filmmakers and film festival organizers learned that early pivots to virtual platforms and other unconventional strategies weren’t just ad-hoc solutions to short-term concerns. They were the nascent systematic shifts of the very concept of film festivals that would fit the “new normal” imposed by the pandemic. Two years in, filmmakers continue to miss out on the thrill of premiering their films at a packed theater, but organizers have reinvented the festival experience for artists and audiences alike. Though filmmakers are grateful for these innovations, they feel conflicted over their benefits and drawbacks.

This year, Sundance announced a hybrid festival—the first return to its traditional in-person Park City takeover since 2020, along with a virtual program on the platform they developed for 2021. However, with its cancellation of in-person events, the festival went completely online for another year. Along with missing out on a theatrical premiere, artists are also losing out on the meetings and reunions that happen as a result. Loohufvud and Martinsen were excited to make the trip from Stockholm to reunite with the protagonists of their film, the Florida-based Calendar Girls. The energetic and colorful senior dance squad was planning on traveling to Utah not only to watch the film, but to perform at the festival. Their performance won’t be moving online with the film, but the squad’s program director will be part of a virtual Q&A.

The sudden shift to an all-virtual festival also meant that some emerging artists would take a hit financially. Meg Smaker, whose Jihad Rehab has premiered virtually at Sundance, said the festival was meant to be a launch opportunity for Hilda Motion, a boutique animation company from Brazil that worked on her film. “They've been slogging it out trying to get their company off the floor,” says Smaker. “They were really gutted.” The female-run firm was hoping to celebrate their one-year anniversary in Park City and leverage their emergence from obscurity to Sundance by meeting future collaborators and making connections. Traveling to top-tier film festivals is no small expense and refunds for reservations and visas can be hard to come by. “They borrowed a lot of money to be able to go there and they won’t be able to get most of that back,” explains Smaker.

Those in-person meetings can be vital to the future of emerging filmmakers. Smaker hoped it would continue to develop her career, since she met most of her collaborators  on Jihad Rehab through the festival circuit. “There's a lot of secret codes and truths that you need to get wise to, and maneuver and get your film as much out of there as possible,” notes Simon Lereng Wilmont, who directed A House Made of Splinters, which is also a part of Sundance’s World Cinema Documentary Competition lineup this year. Although Sundance provides virtual meetups where filmmakers can interact, Wilmont is unsure that a Zoom-like experience can provoke the same level of discourse. This especially hurts filmmakers like Loohufvud and Martinsen, who are just starting out.

Though Wilmont isn’t entirely convinced of the efficacy of virtual spaces, he is optimistic about Sundance’s “Spaceship,” a “virtual venue that essentially allows film lovers attending the Festival, both online and in person, to gather—through avatars—and mingle.” The Spaceship is part of Sundance’s New Frontiers program, which focuses on emerging technologies. Users can attend parties, experience live performances, and interact with each other in virtual spaces via a browser or a VR headset. “Maybe I'm too old and I haven't been keeping up with virtual life, but I was blown away by it,” says Wilmont.

The virtual aspects provide opportunities for interactions that might not have happened in-person. Khan and Gassert’s film follows the perilous journeys Cuban baseball players endeavor to have a shot at their dream of playing in America. Gassert recalls a virtual Q&A with the players’ trainer and coach, Roberto Muñoz, and hopeful slugger Reynaldo “Happy” Oliveros. “When Roberto said to Happy, ‘We cried over the fact that we had to cut you,’ he was able to bring some humanity to the painful real thing that happened in their life. For a moment… it wasn't about the documentary anymore. We were able to provide this platform where there was some healing between some of these guys who had gone through a really tough thing where there were no real clear lines of right and wrong, just well-intended folks trying to make their lives better.”

The elimination of geographic limitations that technology brings also allows film festivals to reach a wider audience. The often enormous financial proposition of attending a large film festival prohibits many filmmakers and cinephiles  from ever attending. Virtual platforms allow a wider audience to enjoy festival lineups from their own home for a fraction of the cost. Smaker feels the democratization brought by a virtual component is an enormous benefit: “I can say to people, ‘Hey, that film I’ve been working on for the past five years—you can watch its premiere and it's only 20 bucks.”

The opportunity for more people to see their work was a near universal positive sentiment among the filmmakers I spoke with, but many expressed concern over the various set-ups and devices their films would be viewed on. Wilmont recalls that his colleagues were nervous when festivals first moved to virtual platforms, but were surprised at the number of people who watched their film. Margaret Brown, whose film Descendant is premiering at Sundance, remembers, “I was like, ‘This is not what I want,’ but then everyone’s texting me, ‘I got a ticket to your movie!’” Brown, who has been to Sundance before, continues, “You get this feeling of like, ‘Ah, I'm here and it's happening.’ And if other people can have that feeling, that's cool.”

Some festivals continue to find unique ways to keep an in-person component to their program. The New York City-based Rooftop Films constructed an enormous drive-in screen in the parking lot of the New York Hall of Science, the city’s first since the now-closed Whitestone Cinemas got converted to a multiplex. Rooftop’s drive-in was even able to host other film festivals, as Senior Programmer Dominic Davis explains. It proved to be a valuable learning experience for Rooftop. “We now have this kind of ethos of ‘collaborate or die’ that came out of the drive-in,” says Davis. Though there are no plans for the drive-thru to return this year, Rooftop will continue to exhibit films in unconventional outdoor spaces like Greenwood Cemetery and The Old American Can Factory.

It was at the drive-in that The Last Out got its public premiere. “It was the first time that I felt like I was actually watching my movie,” says Gassert. Even with an in-person screening, the complex obstacles caused by the pandemic kept people apart. Because of travel restrictions, Khan was unable to attend. Tribeca 2021 expanded far beyond its lower Manhattan enclave to outdoor screens across New York City’s five boroughs. “The energy and positivity of our attending filmmakers was the most exciting I’ve ever seen at the festival,” maintains Cara Cusumano, Festival Director & VP Programming at Tribeca. The festival supplemented that year’s offering with screenings from its 2020 films, including The Last Out. Tribeca has offered their “At Home” virtual platform since 2011. Cusumano notes, “We are always thinking long term—if this is a program and an audience we can grow and cultivate, it is an exciting new option for filmmakers moving forward that we hope will exist in parallel with live premieres rather than supplant them.”

Along with festivals adapting their operations to the COVID era, filmmakers and their teams are finding new ways to preempt the uncertainty. Smaker says some filmmakers are creating partnerships to help get the word out about their film: “The great thing about documentaries is usually there's some kind of organization or group that would be extra interested in the film. ” She also notes how sales agents are planning Zoom meetings ahead of screenings so distributors can put a face to the film they're watching. Projects with sensitive subjects, like Smaker’s Jihad Rehab, are also planning ahead for security risks as virtual festivals, with their larger, wider audiences, bring an increased risk to filmmaking teams and their collaborators.

Festivals are meant to bring people together. Though technology is making it increasingly easy to connect people in progressively sophisticated ways, the need for a screen will always create a barrier between people. More than anything, filmmakers are desperate for the feedback they would normally receive at in-person screenings. They hope that  Q&As, social media, or press coverage can penetrate the isolated viewing experiences of online festivals. Cusumano adds, “I think the next area of growth for virtual festivals will be related to the social experience, and how to create the same opportunities for networking and socialization that’s such an essential part of being at an in-person festival.” Wilmont feels a more real experience may be possible in the coming years, but it still won’t be the same.

The gravity of the reason for the disruption of film festivals is not lost on filmmakers. All the filmmakers slated to premiere their films at this year’s Sundance stood by the organizers’ decision to go online. It’s complicated for an artist to reconcile the labor that goes into making a film with the relative “frivolity” of film when viewed through the prism of a global pandemic. When Maria Loohufvud heard her in-person premiere was canceled, she was in the hospital with her son, who had suffered a minor injury. “It was like the worst day, but at the same time, that gave me some perspective,” she admits. “Of course, we wanted to go to Utah, but getting that [message] when you're at the hospital with a kid, it gives some perspective…that, well, worse things can happen.”

Kent Murai Wilhelm is a multimedia journalist born, raised, and based in New York City. He writes and makes photos, podcasts and videos about film and local New York City stories. You can find him on Twitter @kw_hc

END_OF_DOCUMENT_TOKEN_TO_BE_REPLACED

CPH:DOX's Directors on Reinventing the Film Festival During the COVID-19 Chaos