Doc Fortnight Serves Up a Global Feast of Nonfiction 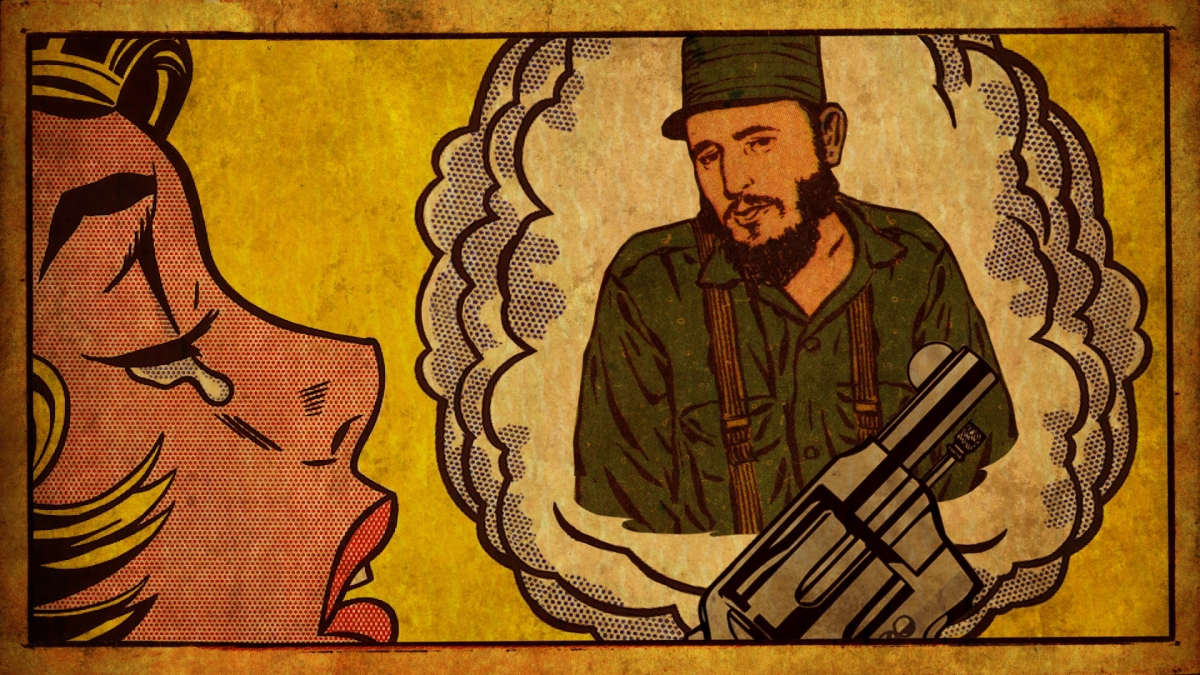 Now in its 17th year, the Museum of Modern Art (MoMA)'s Doc Fortnight 2018 showcased "outstanding and innovative nonfiction film from around the world." Curated for its first 15 years by Assistant Curator Sally Berger, the showcase was guest-curated the last two years by filmmaker/educator/programmer Kathy Brew. Brew distinguishes the event from other documentary showcases as targeted for the public and not "Hollywood on the Hudson." With MoMA's mission to celebrate film as an art form, and holding the "strongest international film collection in the US," Doc Fortnight aims to identify quality work in this cinematic form.

Profiles of cultural creators included George (Jeffrey Perkins; 2017), on George Maciunas, the founder of the avant-garde art movement known as Fluxus. A Lithuanian-American artist and impresario who began as an architect, Maciunas thought of his movement as both political and artistic. His community of painters, sculptors, architects, composers and designers staged happenings and made Flux Boxes and other multiples. He is also known as the "father of Soho," having transformed a neighborhood of industrial spaces into a celebrated artists' loft district. Yoko Ono and Jonas Mekas are among those who worked with Maciunas and who share their reflections about him in the film.

Moving Stories (Rob Fruchtman; 2018) documents the Battery Dance Company's Dancing to Connect Program. This 41-year old organization, founded and run by Jonathan Hollander, teaches vulnerable youth to express themselves through movement. We follow six dancers who lead one-week intensive international workshops with kids to create a dance. Each country has its own issues: In South Korea, for example, there are North Korean refugees who represent a culture clash, while in India, the girls are at risk from sexual predators. We cross-cut among the workshops, and the filmmaker hones in on an Iranian dancer who reached out to Battery Dance, communicated daily via Skype, and joined them in Jordan for a dance festival, where he performed. The tensions that arise from cultural differences during workshop week are obliterated during the intercut performances, and the film begs the question, What happens after this powerful week is over? The only after-story we get is of the Iranian dancer, who was killed in an ISIS bombing when he returned home.

While I Yet Live (Marris Curran; 2018) is a short on the elderly African-American quilters of Gee's Bend, Alabama, who reflect on the civil rights movement and their departure from and return to Alabama, while creating their amazing quilts and singing the spirituals that fueled the movement.

The Rest I Make Up (Michelle Memran; 2018) is a line from the musical comedy Promenade, by Maria Irene Fornes, a prolific Cuban-American playwright who lives in New York: "I know everything. Half of it I really know. The rest I make up." Known as Irene, she is an Obie-winner, a teacher and a lesbian (the love of her life was Susan Sontag). In fact, Fornes may be the most major player in the theater world you might never have heard of because she has been largely left out of history. In the film, this feisty, dynamic presence is recalled by theater luminaries Edward Albee, John Guare, Paula Vogel, Lanford Wilson, Ellen Stewart and Oscar Eustis. A young woman who interviewed Irene, Michelle Memran, befriended her and went on to make this film, in which she plays a prominent role. Memran takes Irene back to Cuba in a poignant sequence about memory, since Irene is developing Alzheimer's. This film, along with George (George Maciunas died at age 46), touches on themes of cultural creation and mortality.

Other films that explore the preciousness and precariousness of human life are The Silent Teacher (Maso Chen; 2017), the tale of a family's grief over their lost matriarch and the students who learn from her body, which the family donated to a medical school in Taipei; Instructions on Parting (2018), director Amy Jenkins' experience with a cancer diagnosis during her first pregnancy, while three of her closest family members slide toward death; Calabria (Pierre-François Sauter; 2016), which follows two emigrant undertakers who attempt to repatriate the body of a Calabrian emigrant who had come to Switzerland to find work; and 13, a ludodrama about Walter Benjamin (Carlos Ferrand; 2017) who committed suicide in 1940 when he thought he was trapped by the Nazis. This 13-chapter essay on the German-Jewish philosopher, cultural critic and essayist reflects on the facets of his work, his world and his personality.

Stories of the marginalized include the curiosity Mr. Gay Syria (Ayse Toprak; 2017). The exiled Syrian gay community in Istanbul holds a pageant to shine a light on their community's plights. The winner is a hairdresser who lives downtown during the week and visits his family—parents, siblings, wife and young daughter, none of whom know his sexuality—in the outskirts during the weekends. A photo shoot of the winner on a rooftop is a metaphor for what is possible, given that ISIS is notorious for throwing gay men off of buildings. The contestants not only experience difficulties as Syrian refugees, but have the added stigma of their sexual preference.

Brew also considers Black Memorabilia (Chico Colvard; 2017) in this category. The film presents objects of popular culture—household products whose packaging includes Mammy, ZIP Coon, Sambo, Pickaninny, Uncle Tom, Buck, etc.—that represent White supremacy and Black dehumanization. The film is divided into three chapters: Manufacture, Consume and Reclaim. Each is led by a woman: Juan, a Chinese iron worker who makes "Jolly Nigger" coin banks; Joy, a White antiques dealer in the South who sells KKK and Black memorabilia; and Alexandria, an African-American, Brooklyn-based artist who reclaims these images for her own purposes.

Of the films that depict hot spots on the world, Liyana (Aaron Kopp, Amanda Kopp; 2017), is a heartrending standout. Orphans in Swaziland, a country with a high rate of AIDS, write their own fairy tale about a young girl they call Liyana and the adversities she encounters, which mirror their own difficult lives. The film cuts between the animated story of the fictional Liyana's journey, with footage of their own lives at the orphanage, which involve going to a clinic to test their HIV status, and attending classes led by a storyteller who guides the process.

Syria comes up again with The Long Season (Leonard Retel Helmrich; 2017). A refugee camp in Lebanon was set up by seasonal workers from Raqqa, Syria, who were unable to return when their city was taken over by ISIS. Some rent land to cultivate crops, while others toil in the fields of a local farmer, who treats them with contempt. Mostly, the refugees wait for the bus that brings goods and news from Raqqa. Frustration turns to conflict, traumatized children become aggressive and women’s freedom of movement is very restricted.

One Day in Aleppo (Ali Alibrahim; 2017) chronicles a day in the life of this bombed-out city. It's hard to believe anyone lives there as we witness seemingly normal activities—feeding hordes of cats, making food, opening body bags, kids painting. Death is everywhere. We see bodies put in shallow graves divided by cinderblock partitions, like the devastated apartment blocks all around. We're in a moving car that gets bombed and the windshield shatters. One character says, "The only thing that makes me feel that I'm still alive is my sense of fear."

Kathy Brew considers Cuba a different kind of hot spot, which is why she opened Doc Fortnight with Habaneros (Julien Temple; 2017), a highly stylized history of Cuba from slavery to Castro using archival footage, animation, feature films, interviews and a vibrant soundtrack.

When asked about narrative trends, Brew highlighted films that went beyond live action to include animation, as used in Liyana; 13, a ludodrama about Walter Benjamin; Out of My Head (2017), Susanna Styron's film on migraines; and Western Wild: Or How I Found Wanderlust and Met Old Shatterhand (Martha Colburn; 2017), on the making of a film about German author Karl May. Brew also cited the multi-platform project Hibridos, the Spirits of Brazil (Vincent Moon, Priscilla Telmon; 2017), which has a feature-length film, open-source website, multi-screen, site-specific installation and live-cinema experience akin to VJs. Brew included projects that employed 3-D and hybrid animation, stop-motion, live experiential cinema, data artistry and military drone footage. As an example of the latter two approaches, Josh Begley's Best of Luck with the Wall used 200,000 satellite images from Google maps of the US/Mexico border, starting with the easternmost point and ending up at the Pacific Ocean.

For the first time, MoMA experimented with scheduling films differently. A few titles were selected for week-long runs, while others were given just one showing. In addition, Brew programmed a Jonathan Demme documentary retrospective. Better known as a feature filmmaker (The Silence of the Lambs, Philadelphia), Demme, who died in 2017, has been making documentaries since the 1980s. They range from Stop Making Sense (1984), the celebrated Talking Heads concert film, to Haiti: Dreams of Democracy (1988), Neil Young Journeys (2011), and his last film, Justin Timberlake + The Tennessee Kids (2016).

END_OF_DOCUMENT_TOKEN_TO_BE_REPLACED

Thinking Outside the Docs: A Fortnight of Nonfiction at MoMA