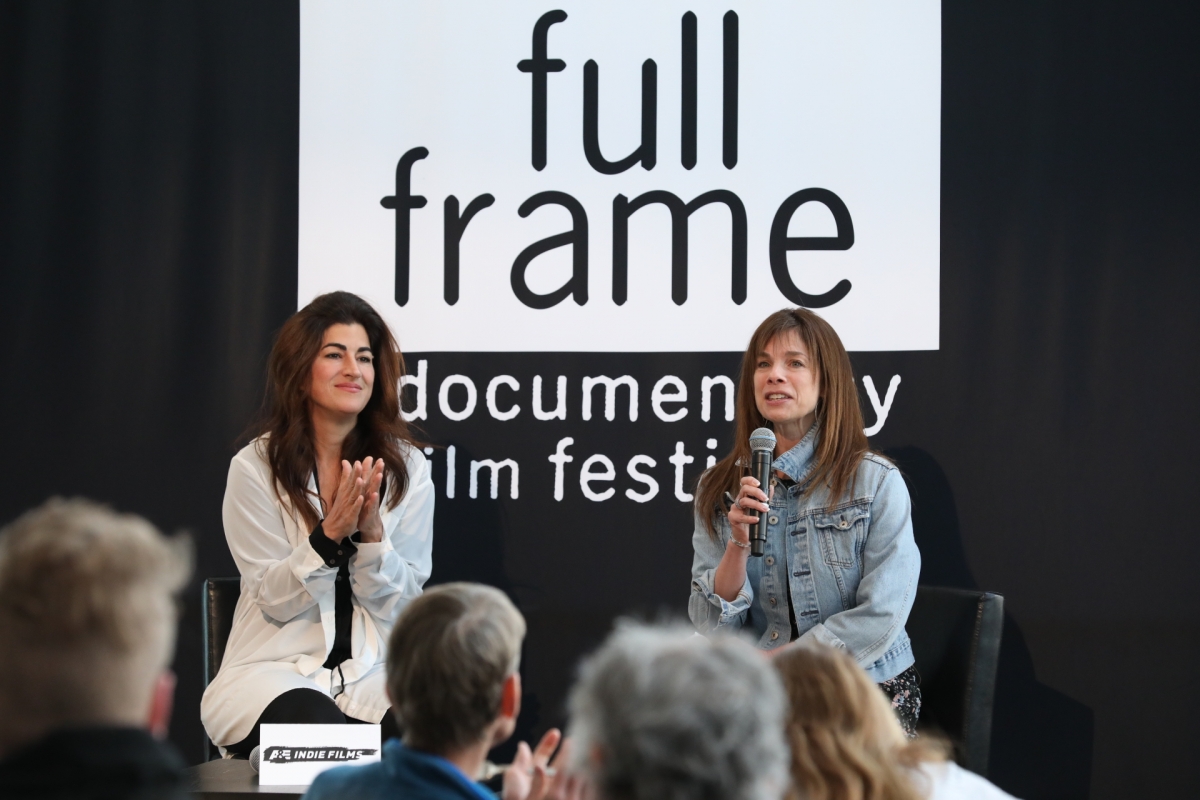 This year's Full Frame Tribute honoree, Jehane Noujaim, is no stranger to the 21-year-old Full Frame Documentary Film Festival, having brought both her very first film, Startup.com (co-directed with Chris Hegedus, and produced by DA Pennebaker) to Durham over a decade and a half ago, and three years later, 2004's prescient Control Room. Since then, of course, the Harvard-educated, globetrotting director (she splits her time between the US and Egypt) has gone on to be nominated for an Academy Award (for 2013's The Square), as well as winning the TED Prize (which allowed her to create the globally broadcast, multimedia event Pangea Day—which in turn inspired TEDx, which blends live community events with TED Talks). Most recently, Noujaim partnered with Angelina Jolie to executive-produce Nora Twomey's The Breadwinner, an animated feature that also garnered an Oscar nomination just this year.

And fortunately for those of us attending the fest earlier this month, Noujaim sat down with festival director Deirdre Haj for a wide-ranging discussion about her body of work and its continued relevance today, as part of this year's A&E IndieFilms Speakeasy conversations (which have been an integral part of Full Frame for the past eight years). A Discussion with Jehane Noujaim took place at the Durham Hotel at noon on a Friday to an eager (and probably over-caffeinated) crowd.

Haj began by addressing the origin story of Noujaim's impressive career—when she started filming her roommate at the time, a tech entrepreneur who seemed to be raking in the dough for doing nothing. Noujaim's lucky break came when she learned that Hegedus and Pennebaker were also following the startup story, though from the venture capital angle. They ended up joining forces and Startup.com was born. After Noujaim and Haj discussed the importance of following a story like one would do with narrative work, Haj brought up the fact that the director had actually started out as a photographer. She was curious to learn what had set her on the filmmaking path. Noujaim responded with two words: "Rob Moss."

After taking the esteemed filmmaker's class at Harvard—and becoming exposed to the work of talented contemporaries like Nina Davenport—she was hooked. Upon graduating, Noujaim landed a job at MTV, working on Unfiltered. Haj, one of the deftest moderators around, then pivoted the conversation to Control Room—pointing out that the doc (which profiles Al Jazeera and its coverage of the 2003 US invasion of Iraq) took up the subject of "media bias" before it was even on our radar here in the States.

Noujaim noted that because she grew up in both the US and the Middle East, she was able to see the "different realities" early on. "Bombing Iraq into democracy" was how her Middle East relatives saw the war. Going to Qatar allowed her simultaneous access to both CentCom (US Central Command) and Al Jazeera. And by making friends with some BBC journalists in the cafeteria, she got the scoop on how to use their offices at night after everyone had gone home.

"It's always good to not outnumber your characters," Hegedus and Pennebaker advised her as she embarked on a four-to-five-month shoot. She completed the rough cut in Egypt—and was amazed when she first saw the war footage from US newscasts. It was "like a video game," Noujaim recalled. This was the pre-YouTube era, before every conceivable POV could be broadcast to a global audience.

Haj mentioned that Noujaim has "soft eyes"—the way athletes are described as having "soft hands"—i.e., the ability to see which characters and stories were going to be worth following long before things got interesting. Noujaim then spoke of being raised in Egypt and Kuwait, of watching those countries' films (and also the fact that neither nation is currently prospering in its film industry the way Iran's is, despite heavy censorship). About Noujaim's Arab Spring-set The Square, Haj remarked that "we never lose our sense of place" while watching the film. Noujaim revealed that The Square was the hardest film she ever made—as everything happened ten minutes away from where she grew up. She was ultimately struck by how diverse the gathering was, and the sense of selfless unity, which was something she'd never witnessed before.

Haj then moved on to Pangaea Day and the involvement of Full Frame founder Nancy Buirski (The Rape of Recy Taylor), whom Noujaim had recruited to help curate the event. The director said she had hoped to spark the same sort of discussions people have at film festivals, but on a global scale. Haj then mentioned the "physiological" difference between watching a film at home versus with an audience. "How do we consume media these days?" Haj emphasized, stressing this important subject, which is certainly not discussed often enough.

After briefly chatting about the Oscar nom for The Breadwinner—which Noujaim loved producing—the topic turned to politics. "We want change—and we want a strongman," the filmmaker observed about the continuing rise of nationalism. Currently, though, Noujaim's concerns boil down to "Who owns our data?" and the "manipulation of free will." She lamented that it's "like Control Room on steroids" these days. Her next film will be tackling these issues, she promised.

As the hour drew to a close, Haj asked, "How do you know where the end is?" Noujaim replied that each film is different. For example, Pennebaker just came into the editing room during Startup.com and declared, "You girls are done!" Noujaim then admitted that she usually just takes her films to "Chris and Penny" to help her decide when enough is enough. Once, when she fretted that a final cut was too clunky, Pennebaker responded, "If Jesus had a broken leg he'd still be Jesus." She laughed at the memory—and also at the irony inherent in her current project: "Making a data film for Netflix."

END_OF_DOCUMENT_TOKEN_TO_BE_REPLACED

Notes from North Carolina: Full Frame's Director on Engaging Outside the Triangle

Do Look Back: Examining the Life and Career of DA Pennebaker