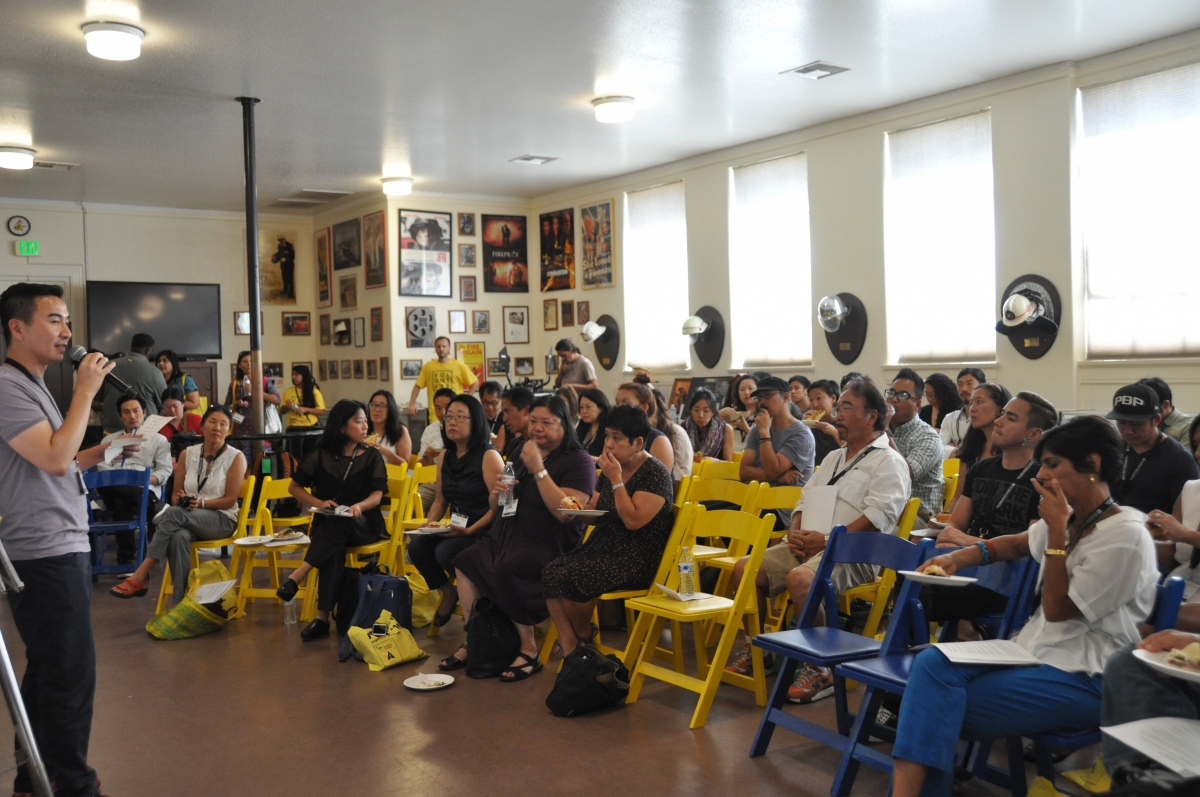 The day before they brought together a groundbreaking number of Asian American documentary filmmakers on the first day of the International Documentary Association's Getting Real 2016 Conference, Grace Lee and S. Leo Chiang barely dodged Typhoon Megi in Taiwan. They had been there for CNEX, a Chinese documentary forum during which Chinese filmmakers come together to work on pitches and meet distributors. Lee and Chiang had to board an earlier flight in order to make it out before the typhoon landed.

Lee, director of American Revolutionary: The Evolution of Grace Lee Boggs, and Chiang, director of A Village Called Versailles, had been planning the Getting Real gathering for months - but it came from a conversation and need that went back years.

"The impetus for doing the Asian American filmmakers gathering was really to organize ourselves to make a deeper impact," Lee explains. "Not only within the field, but in terms of the kinds of films that we're making. There is so much invisibility when it comes to Asian Americans. It is really shocking."

Chiang notes that there hadn't been a meeting of Asian American documentary filmmakers since the early 1980s, when the organization that is now the Center for Asian American Media (CAAM) -- then the National Asian American Telecommunications Association -- brought people together.

"I certainly haven't been in a room like that," Chiang said of the Getting Real gathering, which was co-presented by CAAM. Both Lee and Chiang were initially expecting about 20 to 30 people, and were amazed when some 60 people showed up. "It goes to show that when you put your mind into organizing something, you can really make a difference," Lee maintains.

Lee and Chiang's idea, which was supported by the Ford Foundation and CAAM, dovetailed nicely with the focus of the conference: "Art, Diversity, Sustainability." Lee notes that IDA had really reached out to members and asked what they wanted the conference to be about, and the issues she brought up - about direct ways to support Asian American filmmakers - were constantly on her mind. Lee was also asked to kick off the entire conference with a keynote, in which she kept her focus on Asian American filmmakers.

Chiang notes that going from the weeklong CNEX forum in Taiwan straight into Getting Real was exhausting but also exhilarating. "Even in the documentary world, where people are very cosmopolitan, I usually feel like I don't fit in, but in Taiwan, it was different - I didn't feel othered, even though I have been abroad for so long. So coming from that space in Taiwan to the space in LA, plus with Grace's keynote, it felt like an organic transition for me."

Lee's keynote focused on the invisibility of Asian American stories and pointed out some key facts, such as Asians are the fastest growing undocumented group in the United States. She called on the documentary community - filmmakers, gatekeepers and viewers - to support Asian American stories. "Our Asian American stories are everywhere," she implored in the address. "They are contemporary, full of drama, conflict, are often transnational in scope…and barely making a dent in the nonfiction storytelling world. It's no wonder I see a lot of Asian American producers shifting toward telling international stories based in Asia - but that takes a lot more resources than the stories that affect our communities on a daily basis. I personally would love to shoot a documentary in Korea, but there's an equally compelling story to be told in Koreatown, LA - which is just outside my door."

As Chiang notes, Lee's words were a great segue into the gathering - which Chi-Hui Yang of the Ford Foundation opened by explaining his role to keep the filmmakers on task for the single hour. He circulated an agenda and the results of an informal survey that was sent out in the months preceding the gathering that addressed some burning questions. The findings included everything from questions of authenticity - Who gets to tell Asian American stories? Why are Asian American stories not seen as central to the American narrative? - to ones focused on funding and gatekeepers. "Looking at this room, I see lots of different communities, different generations, lots of different geographies," Yang observed. "As you know, Asian America is defined by its undefinability, by its multiplicity."

The lively conversation that ensued mirrored much of what had been brought up in the survey, with several people trying to talk through ideations of what exactly makes up an Asian American community.

Adele Pham, director of Nailed It: Vietnamese Americans and the Nail Industry called out both Asian American filmmakers and gatekeepers for creating a diluted identity that was inherently non-political. "I don't think we really have an Asian identity," she maintained. "We come from a lot of different places. A lot of time, I see a lot of ghettoization of Asian experiences done by gatekeepers. We're put into a safe Asian box. We need to push ourselves to challenge ourselves within the Asian American categorization." 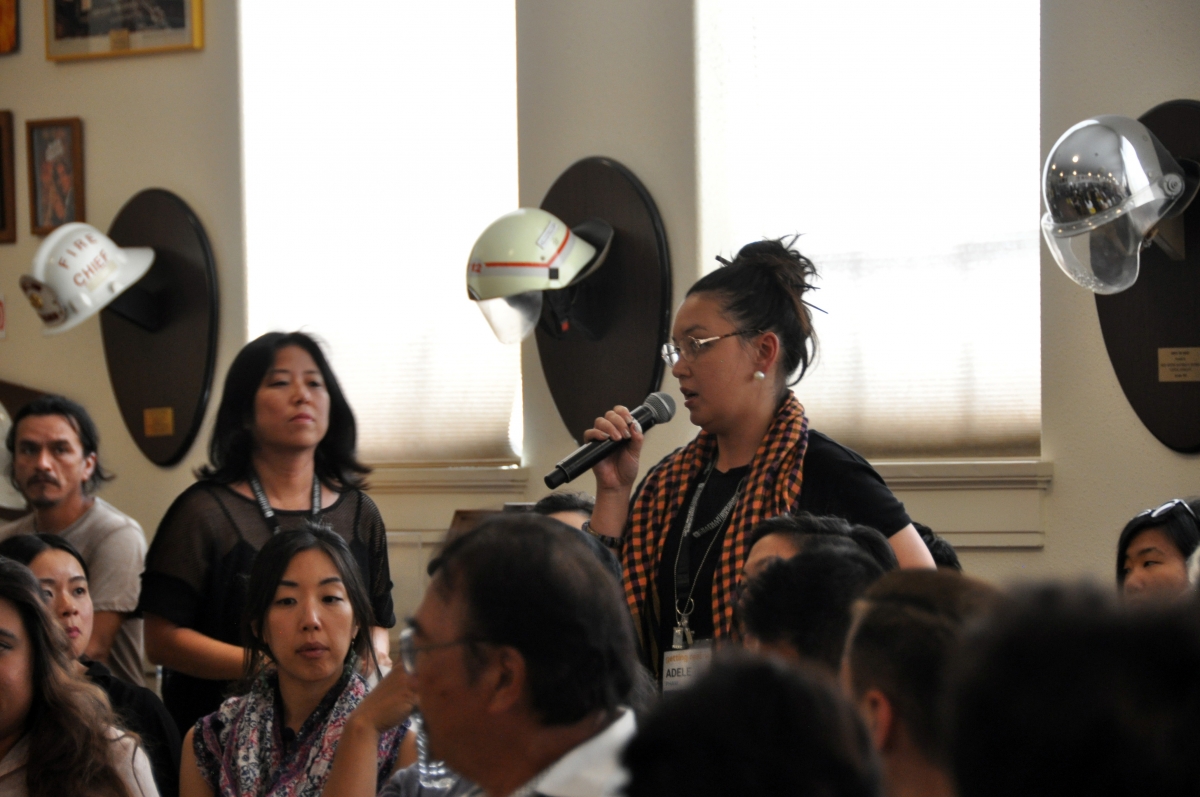 Others talked about not knowing whether or not they were part of the Asian American community because they identified as South Asian. Claire Aguilar, who had been living in the UK for the past few years during her tenure as director of programming and industry engagement at Sheffield Doc/Fest, noted that for the first time she encountered not knowing which box to check for her identity and realized the fragility of the Asian American identity. "I look at the Latino community, which is as diverse as Asian community but have been able to harness the critical mass and have a national identity," Aguilar said, pushing the room to organize internally.

Lisa Valencia Svensson, producer/distributor of the film Migrant Dreams, about Indonesian migrant workers in Canada, talked about the different ways that film has been received - namely, it has spurred significant activism from the subjects of the film in and around Ontario. "We had a white male, a very well-regarded TV critic, write very positively about our film," Svensson explained. "And he said about the Indonesian women workers, ‘I learned that their dreams are just the same as ours.' It really brought it home: Who is ‘they' and who is ‘we'? Who are we building our distribution models for?"

Other filmmakers talked more specifically about funding sources and ways to address the gatekeepers. Kenneth Eng, director of My Life in China, said that he worried most about those who weren't in the room. "I'd like to see more people who aren't part of pipeline, who aren't the ones getting all the grants, have more assistance," he asserted. "People who are falling through the cracks - they are the ones who need the help the most."

Director Sonia Kennebeck, who made National Bird, a film about drone warfare, spoke about the importance of getting early funding, which she received through the Diversity Development fund from ITVS. "A lot of filmmakers like myself are from working class communities," she said. "It is important to talk to funders and explain that they cannot always say, ‘Come back with a rough cut,' because we do not have the means to have a rough cut."

Kathy Huang, director of Tales of Waria - about Indonesia's transgender community - addressed the limited resources allocated to Asian American directors. "One of the things I've been thinking about is this principle of scarcity, which seems to afflict our community," she observed. "When you are applying for funding there are limited reserves for Asians. When you are applying to a foundation, you know that there is going to be limited funding for Asians. They are not going to take all the Asians. There can only be one. It's like Highlander."

While Huang's comments got lots of laughs, there were also many nods of agreement. Huang went on to say that the sense of competition this mindset creates is detrimental to the strength of building a strong community among Asian American filmmakers.

Stephen Gong, CAAM's executive director, recalled the last gathering that had happened like this, but at that time most of the room was full of community activists who wanted their stories told, not filmmakers. Gong also spoke about how much the Asian American community has changed, and because of that, many newcomers don't know the history.

"There is a schism and it's a challenge, but it's a great opportunity," Gong pointed out. "From CAAM's standpoint, we were founded on an effort to say we need our own thing, and our own thing is too big now for an organization of our size with our limited resources to address."

One of the final people to speak up at the gathering was veteran filmmaker Arthur Dong, director of films like The Killing Fields of Dr. Haing S.Ngor and Forbidden City, USA. He talked about being supported by organizations like CAAM for 35 years.

"There is this mindset that I am getting a hint of that we put ourselves in a place where we don't move forward," Dong observed. "Yes, the gatekeepers are there, and yes, they have criteria, and we don't know what that criteria always is. There is a need to move forward on our own initiative, on our own pride, on our work. Whether [your film] is programmed at CAAM or Sundance, CAAM should be just as important as Sundance."

Both Chiang and Lee feel like the meeting was a real success. "The most eye-opening thing was the necessity to have more face-to-face gatherings like this because we don't even see how powerful we can be, because we are always working by ourselves," Lee maintains. "We don't understand that we have a history and a presence as an Asian American nonfiction filmmaking community."

Next steps are more meetings planned at the CAAMFest 2017, and another one slated for New York City later in 2017, funded by the Ford Foundation. Beyond that, Lee aims to continue to have the conversation that was started and to cement relationships and mentorships.

To Chiang, the gathering built a real momentum. "I think we all knew that within the matter of an hour, we weren't going to necessarily walk away with anything super concrete, but we wanted to get people's buy-in, and I think that happened," he says.

Neelanjana Banerjee is the managing editor of Kaya Press, and a fiction editor at the LA Review of Books.