Surveying the OTT Space at Realscreen 2018 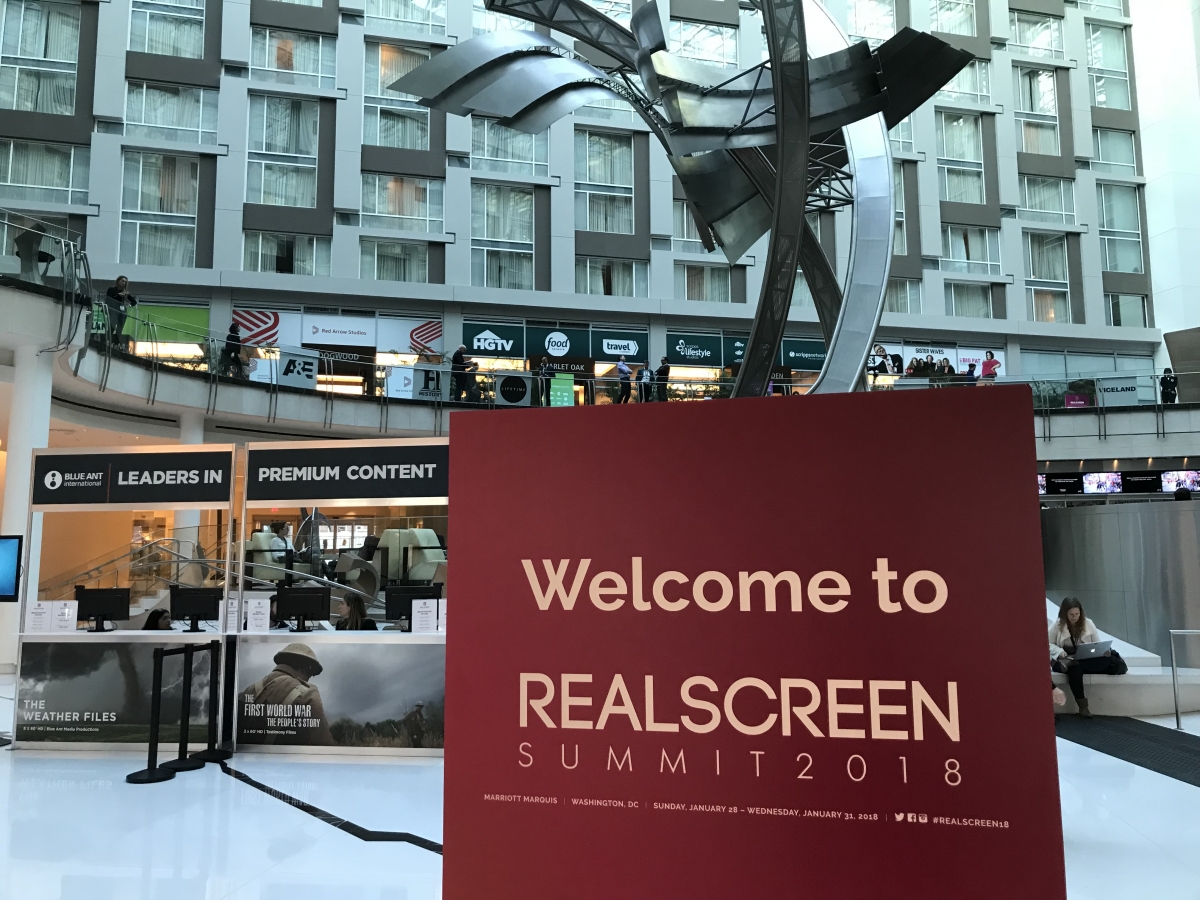 In 1999, Bill Clinton was president. Tablets and smart phones had yet to be unleashed on the world, and streaming was in its nascent stages as a platform.

That was also the year of the first Realscreen Summit. Three hundred people attended. Agents did not roam the halls. It cost about $500 to register. Washington, DC was just emerging as a major nonfiction center. Reality TV was about a year away from barnstorming the airwaves with Big Brother and Survivor. Amazon was still primarily known as an online bookseller, and Netflix was renting out DVDs by mail. And Facebook, Snapchat, Instagram and iTunes were several years from launching.

Fast forward to 2018. Realscreen closed out its 20th edition—a four-day confab in the Marriott Marquis in DC, with close to 2,000 industry leaders from around the world in attendance. The constantly evolving and complex nature of the business was on display once more.

The Realscreen organizers used the occasion to announce a shift in location after consulting with past attendees and delegates. In 2019 the summit moves to New Orleans for a two-year commitment. No more freaky "polar vortexes" or arctic temperatures to endure, in theory. Explained Claire Macdonald, vice president and publisher of Realscreen magazine, "After 20 incredible years in Washington, DC, we decided quite simply that it’s a good time for a change of locale. New Orleans has been rebuilding as a destination and offers delegates a chance to enjoy some new activities."

While the market did not hit its peak enrollment of 2,500 at the 2015 edition, this year's attendees sought out the next deal, or some informative panel. As always, there were a few good sessions for documentary filmmakers this year.

Realscreen honored documentary trailblazers with Legacy Awards. Among them were outgoing HBO Documentary Films President Sheila Nevins and longtime series producer Jonathan Murray. Murray recounted his rise in the business with his late partner, Mary-Ellen Bunim—"We never fought once in 17 years," he claimed—and their first signature series, The Real World, which, according to Murray, "started out as scripted but cost too much." Since then, Bunim-Murray Productions has created Project Runway, Keeping Up with the Kardashians, Ball in the Family and many others.

Bunim-Murray's latest series, Born This Way, brings together real-life characters with Down Syndrome. "This show took me back to my proudest TV moment with Pedro Zamora from The Real World," Murray recalled. "He was one of the first openly gay characters on TV who died from AIDS. It reminded me of why we do what we do." And while Murray may be scaling back on his executive duties at Bunim-Murray, he still has aspirations: "Dream project? There are a lot out there. I have a drawer full of them."

Having announced her retirement from HBO as of March 31 after 39 years and more than 1,000 films, Nevins knows what she likes on the screen: "I am comfortable with being uncomfortable. I like being uneasy. I like what hurts. It forms empathy, and that makes compassion. I like shows that make you cry." With multiple awards to her name, Nevins also shared the response she wants from viewers: "I want to burn you a little bit, so you might heal the world a bit. I want to make people make change."

Asked what she is curious about, Nevins responded, "The capacity for evil, prejudice, mendacity." Some of those topics have produced many documentaries of note. After 32 Emmys and 19 Oscars, Nevins lamented, "Do you have to make an Academy Award-worthy film to get justice? That is outrageous." She added, "I gave my life to these fuckin' films."

Nevins asserted that she has never been a fan of celebrities and their control of programs. You "don't know the endings in docs; it's an adventure. If you know the ending, it's not interesting." Nevertheless, she was behind some notable ones about Gloria Steinem, Ethel Kennedy, Debbie Reynolds and Carrie Fisher. Of the latter she reflected, "That was a great love affair."

What's next for her? Nevins reminded the crowd that she was in the New York City phone book, and "I'm available." And she was intrigued by the idea of no longer being on top of the film world: "Part of losing power is finding out who your friends are," she quipped.

New content providers were a hot topic, too. Every year it seems like there are more outlets for product, yet the landscape can be confusing. The session "Trend Watch: OTT Evolution" tried to end some of that confusion. John Hendricks, founder of both Discovery Channel and Curiosity Stream, and Richard Au, director and head of content acquisition at Amazon Channels, were on hand to help figure it all out. The biggest challenge, said Hendricks, was marketing. "How do we get the consumer? In the old days, channels came in bundles. Now it's a whole different world. We have to spend money to tell consumers about our product." Netflix alone spent $1 billion on marketing this year. He added, "We need to find the right business model."

With all the options available, consumers are often left scratching their heads. "People don't want to manage multiple apps," said Au. "A sea of icons can be confusing." Many over-the-top (OTT) platforms don't have a brand. "There are 140 to 150 channels on Amazon Channels right now"— like Curiosity Stream, HBO, PBS, CBS and others.

Both Au and Hendricks agreed that one of the problems is the sheer volume of content. Hendricks explained, for a SVOD producer like Curiosity Stream, it makes sense to work with Amazon Prime. "They have lots of distribution deals. And they have solved some problems for us, like streaming, marketing and pricing."

Still, someone must curate it all. "Too much choice can make you numb," Au noted. "People watch a small amount. The trend is toward more flexibility and choice. Choose your own lineup. We are very content-forward. It's not about the brand. We want to put content in front of people. We want a highly personalized home page, just like with Amazon Prime. Our customers go home and want premium content… This is not people looking to snack on the latest cat video." Amazon Channels is only two years old, but they are already looking to commission and license shows in the US.

And for those producers in the room, Hendricks revealed that Curiosity Stream may spend up to $800,000 per hour. "We have a slate of originals." (1,600 at this point.) They also will try to bring in co-production partners and are looking at how to work with virtual reality and live events.

"Real Talk: Redefining Relevance" explored what broadcasters think success will look like in a post-OTT world. The question posed by moderator Phil Fairclough was, "Is change good?" Were the panelists leaning toward war or windmills? Everyone on the panel picked windmills. Beth Hoppe of PBS (who recently joined ABC News as its senior vice president for long-form programming) affirmed, "Streaming is good." Nancy Daniels of TLC thought, "We need to get into the mind of the viewer and figure out how to deliver content."

Tim Pastore of National Geographic Channel added, "We know we have to adapt at National Geographic. Three quarters of a billion people are touched by our brand a month." He pointed out the success of the feature film Before the Flood. "We gave it away for ten days to 171 countries, to 64 million people. Only 43 percent watched it on TV." These were great numbers, but as Marc Juris of WE TV explained, "We need to figure out how to make money off of content in different venues."

The first episode of the PBS series We'll Meet Again, for example, ended up on Facebook. "You have to be nimble today," said Hoppe. "Facebook contacted us, and we gave it to them for free for a week. It's a marketing opportunity. We had 2.5 million Facebook streams. Stations bought into the strategy to gain viewers for the new series." All of this is not news to the kids' world. That's where streaming happens a lot faster—PBS Kids is one of the most popular apps.

Hoppe added, "Our basic strategy has not changed. We want high quality. Streaming just causes us to think differently." Coincidentally, PBS has moved from the 12th to the sixth most-watched channel.

"The Business of Unscripted" delved into the ever-changing world of unscripted content. A few nuggets emerged: James Burstall of Argonon and Jan Frouman of Red Arrow agreed that companies and producers need to pivot and change constantly. "I love that the world is constantly disruptive; it pushes us to be the best," Jane Root of Nutopia commented. "Until OTTs find a business model that works, prod-cos looking to work with them have to be ready to go along for the ride."

Today's world is global; producers should consider that factor, too. It's also getting "increasingly hard to have small production companies right now," added David George of ITV. "There are not enough little guys at this conference, and the ideas come from the little guy."

As for what the big guys want, George said, "Netflix is like cable. You can figure out what they want to by their hits. Amazon? When you figure them out, tell me. They want to be premium like HBO. But their business model is different; they have different ambitions." Frouman added, "Amazon wants to be everything to everyone." No one is sure about Apple's strategy yet. "People are waiting for the company to jump in and do something," George commented. Meanwhile, Facebook provides content for free, which has the capacity to be constantly disruptive. One of the most important nuggets from that session was that OTTs can rely on real-time metrics as to what people want. Networks must rely on older technology, and more guess work. These younger players also have execs who are more free-thinking. "What I like so far about working with them is that they are giving us a lot of latitude," said Burstall.

The emergence of crime as a popular genre interested many at the conference. For those wanting to produce content for Discovery ID or others, here are some tips that I took away from the summit: Crime content has to be emotionally engaging. The genre is evolving into new areas such as live TV, more archival and longer show lengths. And there is a good core audience that needs to relate to the characters and situations. They have to say to themselves, "These things could happen to me."

If there was a downside this year to Realscreen, it was the decreased enrollment. But that left more time for meetings, and meaningful conversations—something that was hard to come by a few years ago.

Lauren Cardillo is an Emmy Award-winning filmmaker who recently produced a half-hour historical documentary, Over There: The Adventures of Maryland's Traveling Faculty. It premieres on Maryland Public Television in April. She attended all but two of the Realscreen Summits in Washington, DC.