5 Tips for Rethinking the Documentary Interview 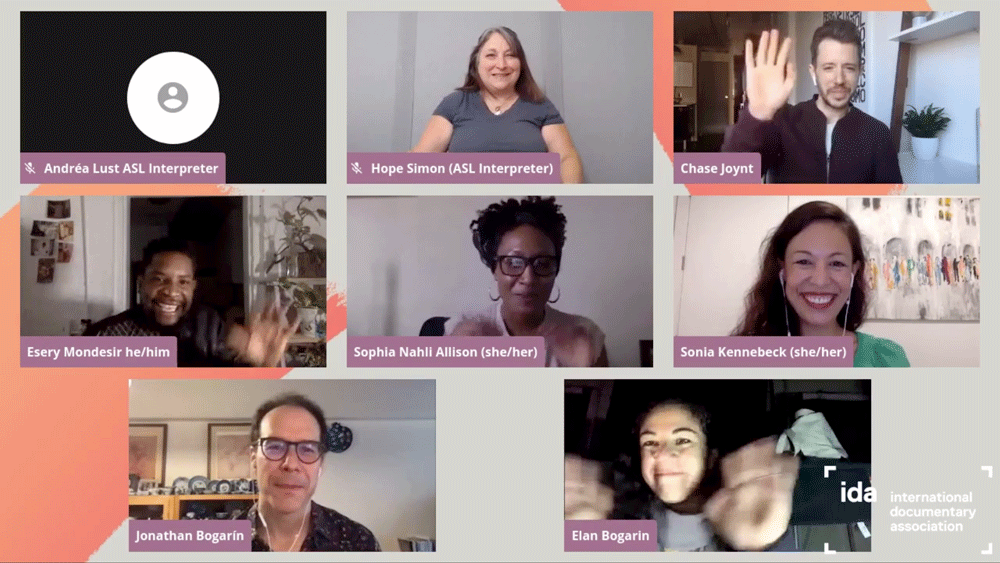 Although the documentary form can take shape in reenactment, animation or other mediums, storytelling through participant interviews continues to command the craft. On the last day of Getting Real ‘20, filmmaker Sonia Kennebeck (National Bird) was joined by fellow talents Chase Joynt (Framing Agnes), Sophia Nahli Allison (A Love Song For Latasha), Esery Mondesir (Una Sola Sangre), and Elan and Jonathan Bogarín (306 Hollywood) to illuminate how trust and personal connection between creators and protagonists are keys to expanding the cinematic voice.

One of the first tips of the night came from Esery Mondesir, a Toronto-based, Haitian-born media artist. Previously a high school teacher and labor organizer, Mondesir draws from his own diasporic experience to form connections with his characters. The resulting imageries are intimate and authentic, free from tension. When a filmmaker shares the same space as their subjects, there is an existing level of trust that not only allows them to accurately capture the physicalities and energy of the scenes, but also opens up the interview to a conversation. As stated by Mondesire, “I don’t start the conversation asking for them to give me [something] without giving anything in return...It’s me also giving you a little bit of myself while I’m asking you to give me a little bit of yourself.” This conversation also needs to go beyond filming. Mondesire considers his film subjects his collaborators. “My point is that they are participating in making the work with me.”

Similarly, Sophia Nahli Allison, who identifies herself as “a Black, queer, radical dreamer,” made sure the interview process was more like a conversation between sisters for A Love Song For Latasha. The main storytellers of her short, Ty and Shanice, are best friend and cousin, respectively, of Latasha Harlins, whose 1991 murder was one of the impetuses for the 1992 Los Angeles Uprising. To ensure a safe, relaxed and peaceful environment for them, Allison forwent on a crew that “may not know or understand the importance of holding Black women up in a story like this.”

2. Avoid reenactment misrepresentation by casting actors that can pull from their own lived experiences.

Chase Joynt’s short documentary, Framing Agnes, revives archival stories of transgender people of the 1950s with a combination of reconstruction and narration. Joynt gave actors substantial summaries of source transcripts and “had extensive conversations with them about the intricacies of what it might mean to inhabit or embody or think with these historical subjects.” However, “in an early prep meeting with Angelica Ross, who plays Georgia in the project, I was attempting to speak out loud about my impressions and feelings and engaging Angelica and thinking, ‘What do you imagine here?’ She stopped me mid-question and said, ‘I know her. I don't need some of these specifics. My walking toward this person is toward a history and a haunting that lives in my body.’”

3. Read Sonya Childress’ essay “Beyond Empathy” before conducting interviews that may be potentially re-traumatizing or extractive.

A recommendation from Sophia Nahli Allison, Perspective Fund Senior Fellow Sonya Childress wrote in 2017, “There is something implicit in the desire to build empathy that is based on the assumption that subjects of documentary films are so foreign to the audience that they must be transported into the world of this person or culture in order to empathize with their plight. This ‘othering’ of the film subject is fraught with old notions of the colonial gaze, but it is, not surprisingly, the fuel that powers the empathy machine.” Childress added that documentaries should be strategic tools to “validate and empower those who rarely see their experience on screen, to convene disconnected people and movements, and to build alliances and power.” With this framework, Allison did not repeat Latasha's story in the context of her death. Instead, her film was a “rebirth,” a celebration of Latasha’s life and impact.

4. You can always ask a question more than once.

Elan and Jonathan Bogarín are the sibling duo behind the personal documentary 306 Hollywood. In addition to interviews with their late grandma, Annette, that they filmed over 10 years, the pair also examined their grandma’s possessions and passing through interviews with experts across fields: historian, curator, funeral director, physicist, and even a librarian. Elan recommended asking the same question at the beginning and end of an interview. “By the time they have gotten used to talking to us and being on camera, sitting there and answering a million questions, you might get the best answers the second time after they learned the drill. Then, they’ll answer it 1,000 times more honestly and almost off-the-cuff.”

5. Don’t try to fill the silences.

In closing the panel, moderator Sonia Kennebeck, whose latest film Enemies of the State premiered at Toronto International Film Festival this year, added, “A lot can come out of a silence.”

These pieces of advice from some of the most innovative creators of the moment can make a difference as you develop your own filmmaking style. While there are many ways to conduct a documentary interview, forming a more organic and genuine connection with your participants and, in turn, leads to deeper, more reflective storytelling.

END_OF_DOCUMENT_TOKEN_TO_BE_REPLACED

Tales from the Trenches: A Fable of Faith, Funding and Feathered Friends

Doc U: A Conversation with Brett Morgen