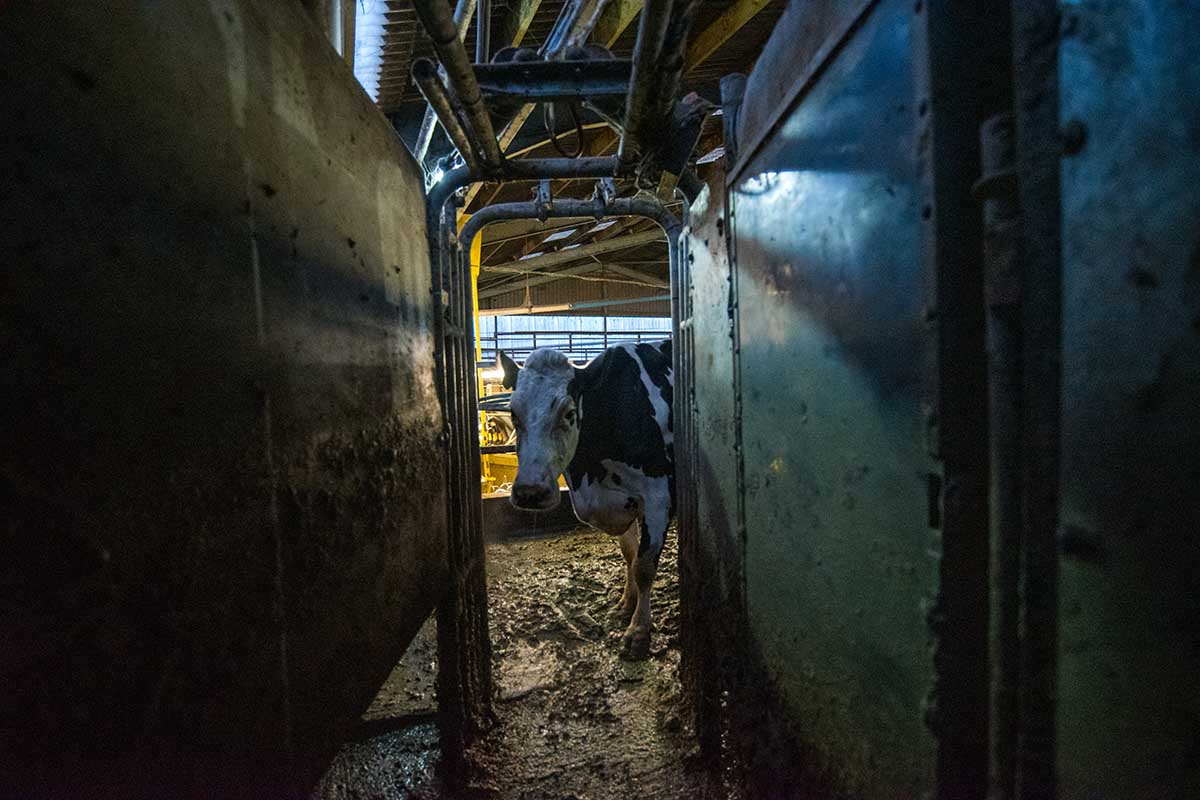 Over at The New Yorker, Richard Brody writes about how nonfiction filmmakers like Andrea Arnold often manage to "erase themselves and their processes." Scott specifically talks about Arnold’s latest, Cow.

Cow filters out the basic personal element. It doesn’t show the crew’s interactions with the farm workers, who seemingly pretend that the crew and equipment aren’t there; the efforts of the crew to stay close to Luma; or the conspicuous intrusion of Arnold and her colleagues setting up shop, with their equipment, at the farm and in the nearby fields where the animals graze. For that matter, the film also excludes the backstory on which it inevitably depends: the negotiations by Arnold and the producer, Kat Mansoor, with the farm’s management that set the terms for filming there, the implicitly transactional basis for the film’s very existence.

Loznitsa’s refusal to weigh in on his found-footage—notice the absence of contextualizing voiceover commentary, the little (if any) background information we’re given—lends his archival projects an impression of objectivity, a detached gaze. And yet all of them are rooted in what’s ultimately a pedagogical concern, a plea to understand the horrors of the past and the factors that made them possible, so as to prevent history from repeating itself. It’s a warning that, in the midst of today’s Russo-Ukrainian war, feels timelier than ever.

At its heart, 2000 Mules is a triumph of capitalism. There’s huge demand for proving that Trump didn’t lose in 2020, and this film provides just enough of a veneer of authority to let people collapse comfortably into that belief. That it doesn’t survive even mild external scrutiny is as irrelevant as pointing out contradictions in a religious text is to recent converts: They want to believe what they want to believe.

"Their ability to keep their side ignorant is total," radio host Dennis Prager said during the pundit panel portion of the film. It’s an interesting commentary on how partisan belief works, certainly.

My expectation is that telling Alexei’s story in this format will remind the world of his plight. If we can keep Alexei’s name in the headlines, it will be harder for the regime to murder him in prison. My personal mission as the director of this film is to get as many people in the world to see it as I possibly can.

In his latest column, IndieWire’s Eric Kohn looks at Rotterdam Film Festival’s firing of its programming team, and questions the way the larger industry treats programmers.

Many programmers work in a perpetual nomadic state, bouncing between a range of festival gigs to support themselves however they can. They have no union or otherwise centralized institution to represent their concerns. Festivals themselves have the International Federation of Film Producers, which has represented the regulatory needs of film festivals since 1933. However, a FIAPF rep declined to discuss the programmer situation in Rotterdam, they said, because "there are no standards related to such matters in the FIAPF regulations for international film festivals."

For their latest volume, titled "The Exceptions," World Records Journal re-published a Film Culture interview from 1961, on unions and independent filmmaking. Reading it, it doesn’t feel like the piece came out that long ago.

Each local has a great autonomy. The International Alliance cannot take upon itself to make deals or exceptions to existing rules in the various locals without the approval of each individual local. The International Alliance acts really as a liaison between the producers and the locals. The locals set down their own working conditions. As long as those conditions are not in opposition to the established general constitution of the IA, the Alliance will say nothing. The trouble is that the crafts have never got together to standardize their working conditions in terms of any single production. This is the main trouble. To get a single representative, or a body that would represent all these locals, has been something on which all the locals and the IA have been working for quite some time.

We live in Dayton, Ohio, where the GM Plant in our film was located. When we read the news in our local paper, the Dayton Daily News, that the plant was closing, we reacted with the same shock as everyone else in our hometown. This plant was such a huge employer—a bedrock business, a huge source of pride. We are citizens with cameras, and we thought we should get down to the plant to see if there was a story to tell, and how to tell it.

END_OF_DOCUMENT_TOKEN_TO_BE_REPLACED

Anatomy of a Scandal: 'Icarus' Shifts from Comedic Experiment to Thriller Investigation