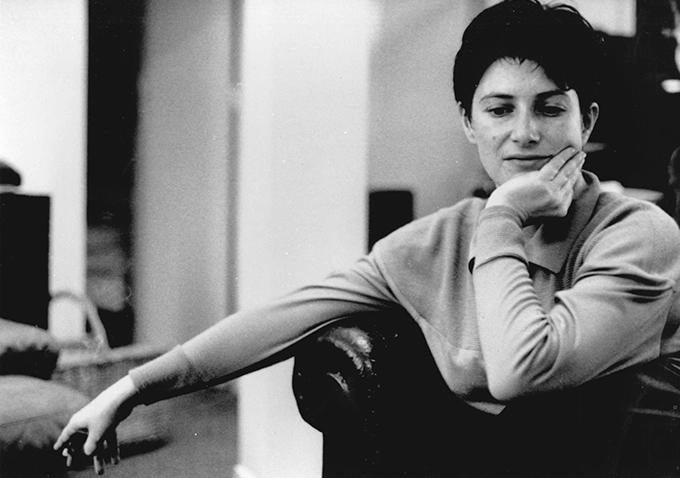 "Some words that spring to mind about Akerman's work are: annoying, irritating, stubborn—but in the best possible sense. She was not obliging, thank God. She was not afraid to try your patience. She would push past the stage when the alleged single "point" was made and get you to keep watching, a prisoner of reality as it unfolded. She was exceptional at showing process. The paradox was that so much alienation or depression could coexist with such wonderment and glee at being able to stare at the world as it is. As it was. It no longer is for Chantal. We are the poorer, and will now have to look for her rigorous honesty and generosity elsewhere."

Kirsten Johnson talks with Eric Hynes about her new film, which documents a military surveillance blimp over Kabul:

"One likes to operate with some illusion that you can be invisible when you're filming, but you're not. You're a person in the place. And you mean a lot there — who they imagine you are, and how you interact with it all. I'm always trying to figure out how I engage in it. But something I just have to accept is that I'm disturbing, that people have not seen anything like me. In this case I was wearing a hijab, but I’m a woman with a camera. Part of the work is accepting who you are, that you are a big white American person with a camera that costs this much money who can get on a plane and leave. But you’re also someone with a sense of humor and someone who's willing to get physically close to people. All of those things are meaningful to me, so I constantly think about it."

The Tyee on how the Trans-Pacific Partnership will effect filmmakers and their free speech rights in Canada:

"Canada has some of the toughest laws to stop you from circumventing things like copy protection on DVDs. The laws don't stop people from making backup copies of movies they've bought, but they do put roadblocks in my way as I'm trying to edit content into my documentaries, creating massive uncertainty about what I can and can't put into a movie. The TPP threatens to make these problems even worse for me in a number of ways. First, it will lengthen copyright terms, putting more material out of the public domain and locking away great works of art for decades. Second, foreign media conglomerates will be empowered to sue Canada if they deem our laws not strong enough to ''protect their property and expected future profits.'' I can easily imagine a situation where documentary-makers are thrown into enough legal uncertainty to be unable to report on crucial issues. Put simply, the TPP will transform Canada's intellectual property rules into an alarmingly large barrier to free speech and free expression."

Stephanie Foo of This American Life on prioritizing diversity in the workplace:

"There are many talented reporters of color who have won prestigious awards. Scroll through their names. Do you really think a brilliant Pulitzer-prize winning writer’s talents will be rendered useless under the crushing weight of having to learn Pro Tools?...It’s not about the mechanics. Again — it’s about ideas. Pay attention to journalists, documentarians, slam poets who are generating creative, attractive ideas, and initiate conversations with them."

The Hollywood Reporter on how the Church of Scientology really doesn’t want Alex Gibney to win an Oscar® for his documentary Going Clear:

"The increased hostility comes at a tenuous time for the Church of Scientology, which, in addition to dealing with Going Clear, is in the spotlight for its association with Cathriona White, a 28-year-old Irish makeup artist and girlfriend of Jim Carrey who died of a suspected suicide Sept. 28. White, who was found with pills — including Ambien, Percocet, Propranolol and Zofran — had been active in a Scientology-sponsored “Survival Rundown” therapy program, and several mysterious guards were present at her home in the days following her death (though they were gone when THR visited the home Oct. 6). According to former Scientologists, the "SRD" therapy can be destabilizing."

From the archives, May 2006 -- The rise and the power of social issue documentary:

"We don't see documentaries as a different category from feature film. It's just about storytelling and the power of film, and fortunately docs in the last few years have taken a bigger place in the marketplace in terms of being accepted as film on that storytelling level; this is something that you can put out in cinemas and people would want to see."