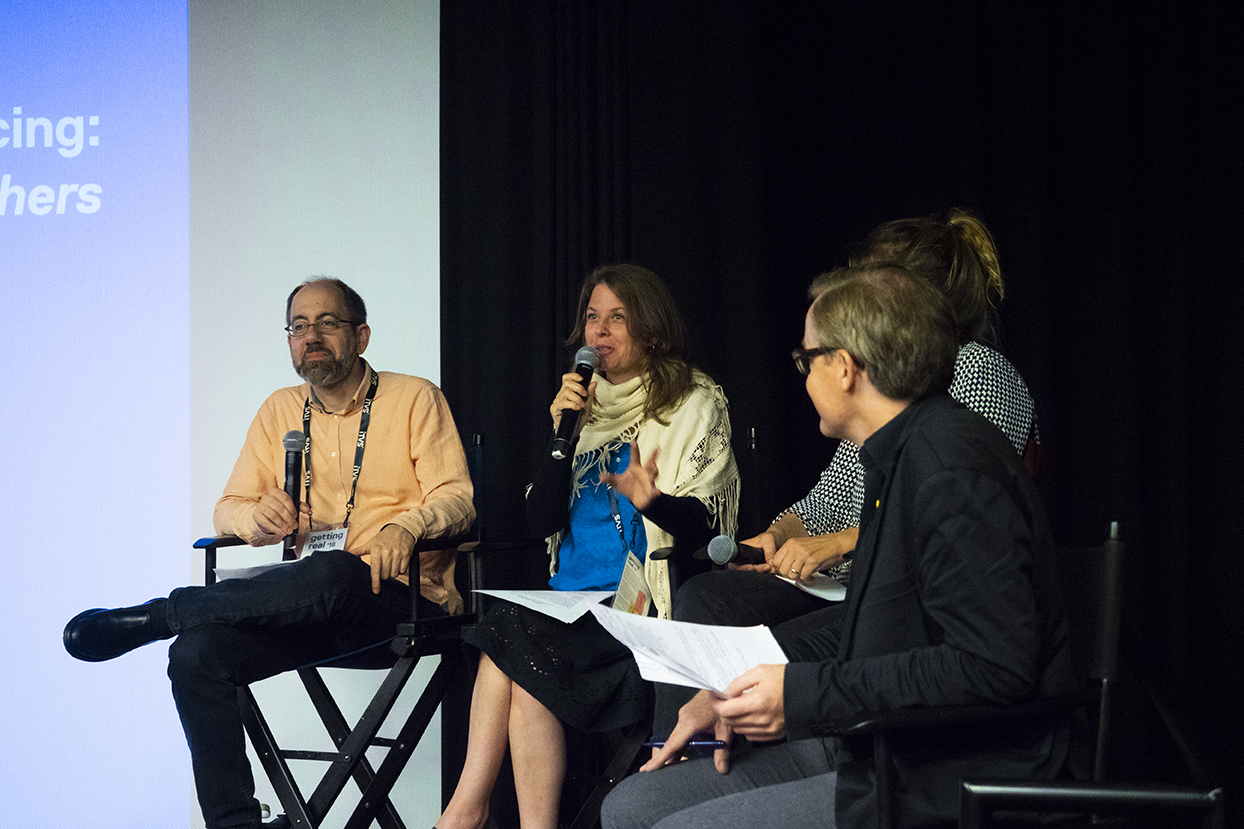 Getting Real '18 is bigger and better! This conference has grown in several ways since the first one four years ago.  This year there are thoughtful panels, fresh ideas, new faces, expanded venues, a younger demographic of attendees and a large group of very helpful volunteers wearing easily identifiable orange tees.

There is so much more this year: Carefully curated panels, topics, case studies, funding initiatives and discussions with interesting and engaging facilitators that may or may not be on your radar.   The decision-making process of figuring out which panel to attend is harder than ever.

Then there is Grenadine, a new process that IDA is using for attendees to sign up in advance.  Initially most of the panels are full, but on a future date more tickets are released.  Grenadine sends emails with information, clarification, updates and serves as a guide to navigate the festival.  You can also download the app.

The third Getting Real kicked off with keynote speaker Molly Thompson, Senior VP of Feature Films at A +E Networks.  A force in the doc community, Thompson inspired the audience to keep telling stories because there are more opportunities than ever to make documentaries.  Thompson concluded with one word:  "RESIST." She noted that the word has taken on a whole new meaning.

Puig divulged a sobering fact: Women of color make up just four percent of film critics.  In a conversation describing freelancer vs. staff writer, Ramos noted, "Once you get into a staff position, you don't leave."  Robertson concurred:  "It's like having a city job." On their professions, Kang noted, “Critics want to be seen as people.”  The panel maintained that audiences should rely less on Rotten Tomatoes ratings, and listen more to the perspectives from these film critics.

After the Film Critics of Color session, I headed down the street to Making a New Reality, presented by Sundance New Frontier Director Kamal Sinclair.  This emerging media session was both terrifying and enlightening.  Sinclair delivered a passionate and informative presentation on the future of storytelling and presented an important issue on responsibility for this new media.  "The Robots are coming…I think they are here,” she declared. Then she showed a slide of a person with a camera sewn in the back of his head.  Needless to say, my jaw dropped several times during this session.  I needed a break after that.  On to lunch.

The beauty of this conference is seeing Fredrick Wiseman walking down Hollywood Boulevard…or the lovely editor extraordinaire Kate Amend.  I only see her every two years, and only at this conference. I spotted Street Fight director Marshall Curry standing inconspicuously against a building. Elsewhere, IDA Executive Director Simon Kilmurry graciously greeted guests at the Pickford Center.  During lunch I met Chicken and Egg's Senior Creative Consultant Yvonne Welbon, ITVS' Noland Walker and Dee Hibbert-Jones, one of the directors on the Oscar-nominated short, Last Day of Freedom (2015)—a film I highly recommend.

I wish I could be at two places at the same time! Up next: the A-Doc/BGDM/Firelight Convening , then International Co-Producing: The Silence of Others both at 2:30 pm.  I caught a screening of this film Monday night; I would have loved to hear filmmakers Almudena Carracedo and Robert Bahar talk about the film, but I couldn't stay for the Q&A. If you haven’t seen The Silence of Others, I highly recommend it.  But I chose to attend A-Doc/BGDM/Firelight Convening panel.

Given that the convening was closed to press, I replaced my press hat with my filmmaker hat. This was one of the new, fresh and stimulating components to the conference.  I can't talk about what went on, but thank you to all involved for making this a panel.  I would love to see this return for Getting Real 2020!

Immediately following the Convening was #Decolonize Docs: The Industry panel.  Moderated by Iyabo Boyd, the panelists were independent multimedia producer/consultant Joseph Tovares; Abby Sun, programmer at True/False Film Festival; filmmaker Senain Kheshgi; and Donald Young, Director of Programs for Center for Asian American Media.  As a former programmer, I could relate to a lot of the points presented by Sun, who addressed the politics of programmers getting their friends' films programmed in festivals year after year, even if the film is not that good.  Sun was also spot-on about the choice of venue being a sign of confidence, and not having support in a room when advocating for a film.  There were several interesting points of discussion, valid arguments and opinions and comments by the panelists and the audience.  This panel could have continued into next week.

It's the end of Day One (and, given that it's 2:30 a.m., it's the beginning of Day Two!) and I’m still trying to pack it all in and make sense of everything.  I'm sure I am forgetting something I found riveting earlier today.  I missed both the Opening Night Party and the BGDM BBQ trying to finish this blog.  I have to meet Iyabo Boyd and some more BGDM members before this event is over.

My journey continues—meeting more new people and reconnecting with old ones, hearing interesting stories and being inspired by all of the great panels.  See you tomorrow—and thank you, IDA!