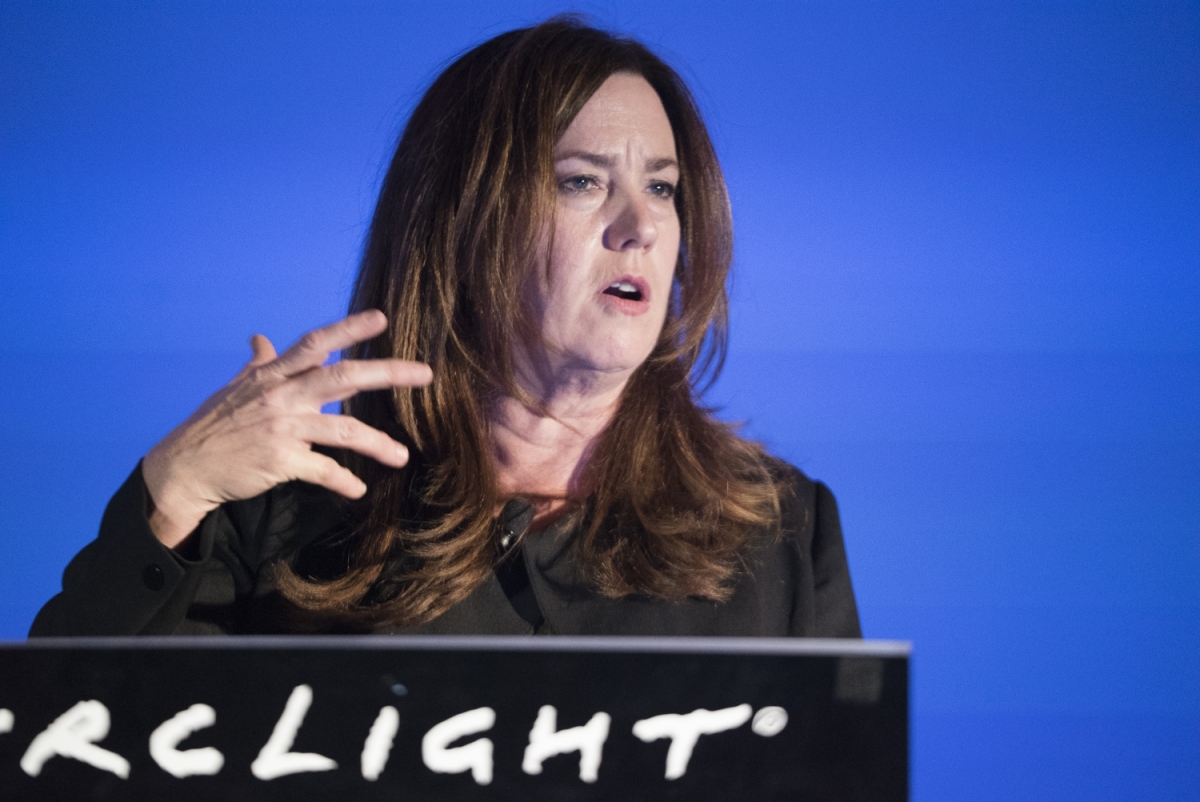 Tuesday morning, the Cinerama Dome in Hollywood buzzed with introductions, reconnections and reunions as Getting Real 2018 attendees settled into their three-day conference journey.

IDA Executive Director Simon Kilmurry offered opening remarks, encouraging everyone to "talk, engage, listen and debate," perfectly setting the stage for Molly Thompson's keynote, which centered around one question: What is a documentary filmmaker?

As Senior Vice President of Feature Films at A+E Networks, Thompson has overseen such Academy Award-nominated docs as Life, Animated; Cartel Land; Jesus Camp and Murderball. Opening her keynote, she admitted that when she pondered the question, "All I could feel were the contradictions" called forth by the question's implications. The documentary filmmaker captures reality, but also creates it by shaping the narrative and curating footage during editing.

Thompson described the "slippery" boundary between what is scripted and what is unscripted. After all, Thompson reasoned, documentaries often include writers in the credit roll (the Oscar-winning documentary Icarus had four credited screenwriters), and the director and editor curate footage in support of the narrative.

Thompson asked, "Can we really say there's no script, no performances?" Grappling with this question, Thompson invited the audience to join her in a thought experiment: Consider documentary filmmakers as journalists, but also as historians, counselors, activists and poets.

Thompson recalled a review of Matthew Heineman's Cartel Land that criticized the film for not making greater use of talking heads or direct explanations. Sometimes, Thompson explained, audiences want the filmmaker to provide answers, rather than linger in the ambiguity or uncertainty of asking questions. Thompson described it as "sitting with the uncomfortable reality…Great journalism is often daring and allows us to draw our own conclusions."

Recording and preserving history as it unfolds in real time or retrospectively, the documentary filmmaker often acts a historian. Thompson referenced the late Claude Lanzmann's monumental documentary Shoah, which captures accounts of Holocaust survivors and witnesses. In the film, Lanzmann locates a survivor after an exhaustive search. The survivor, a barber, finally verifies his experience in what Thompson described as one of the most "gripping and essential interviews of all time." These first-hand accounts ultimately become an important part of the historical record.

Thompson likewise cited Frederick Wiseman's highly observational body of work, which over his 50-year career, has explored the inner workings of institutions, without directing the audience, or deploying voiceover or tidy explanations from formal interviews.

The documentary filmmaker may also be a counselor, or therapist. Thompson pointed to several examples from her involvement bringing films to audiences: Henry Alex Rubin and Dana Adam Shapiro's Murderball inspired audiences with its empowering story of young male athletes living with Quadriplegia who triumph in full-contact rugby in the Paralympic Games in Athens, Greece. Roger Ross Williams' Life, Animated follows Owen Suskind, an autistic child who discovered the ability to speak when he and his family immersed themselves in the world of classic Disney animated films. Matt Tyrnauer’s film Studio 54 offered Ian Schrager, co-founder of the '70s nightclub, a chance to take a deep, inward look at himself on camera, a notable aspect of the film. Thompson also cited Yance Ford's Strong Island, as it follows one family’s epic arc and has proven to provide a "catharsis for families."

Michael Moore was also cited as an example of a documentary-activist who centers the conversation on his point of view, while Errol Morris' The Thin Blue Line, while not overtly an activist film, nevertheless helped to overturn an innocent man's prison sentence.

Filmmakers like Werner Herzog fit Thompson's "poet" criteria—filmmakers whose work evokes deep emotions. "Filmmakers should never be flies on the wall," Herzog once insisted. "They should be hornets."

Herzog’s films, Thompson said, are about feeling; she recalled the evocative moment in Herzog’s 2007 documentary Encounters at the End of the World, when Herzog philosophizes about the fatalistic implications of a possibly deranged penguin. "Is there such a thing as insanity among penguins?" Herzog asks. "Could they just go crazy because they've had enough of their colony?" Herzog focuses on one penguin separated from its colony, who walks toward the mountains alone, disoriented, facing certain death. In considering the penguin's mortality, we must obliquely face our own. The poet's magic trick is complete.

Molly Thompson invited the Getting Real 2018 audience to examine the doc-maker's job from five roles. Given this prismatic lens, I wonder: What happens when we carry the thought experiment to its logical conclusion? Here are my results:

As a journalist, the documentary filmmaker seeks facts and truth; the film is news.

As a historian, the filmmaker documents moments we must preserve and remember; the film is artifact.

As a counselor, the documentarian guides us; the film is a map.

As an activist, the doc-maker calls us to action; the film is a battle cry.

As a poet, the documentarian plumbs the soul; the film is a cosmic vehicle.

Applying the context of these five professions transforms the film's nature—from something we simply consume into news, artifact, map, battle cry or cosmic vehicle. I appreciate Thompson’s question, What is a documentary filmmaker? It invites persistent examination.

May we all continually talk, engage, listen and debate together.

In that sublimely collaborative spirit, I ask: What films and filmmakers would you add to this list? What additional categories? In what other roles might documentarians find themselves? What does it imply about the documentary, and the work of the documentary filmmaker?