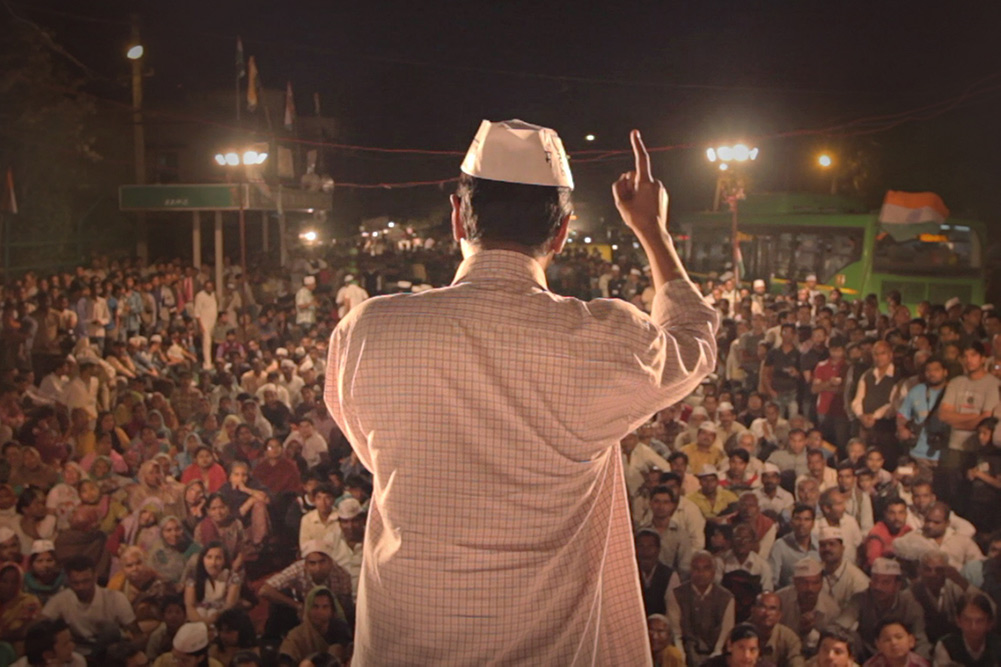 This Sunday, August 15th, 2021 India celebrates 74 years of its independence from British imperial rule. It has been an incredibly challenging year for South Asian communities, both within the subcontinent and the diaspora and we thought this would be a good time to come together, even if virtually, to watch some of the best documentaries to come out of the country in recent years, and celebrate the very unique stories that show us the resilience, resistance, and the fascinating lives of its people.

This year, we decided to partner with the Indian Film Festival of Los Angeles (IFFLA) to create a list of Docs to Watch online to celebrate India. Wherever you are in the world, sit back, enjoy these stories.

We start this list off strong with the 2016 documentary An Insignificant Man. The film, which won the 2017 Audience Award at IFFLA, follows the rise of the Aam Aadmi Party (AAP) or Common Man’s Party. The independent political party in India was created to combat corruption in the government and, through this film, viewers follow the grassroots movement from its humble beginnings to becoming a significant political force.

A lighter, but nevertheless important documentary on our list, Ask The Sexpert tells the story of Dr. Mahinder Watsa, a 93-year-old sex advice collumist for a newspaper in Mumbai. The documentary follows Dr. Watsa as he garners a large following despite sex being a taboo topic and sex education being banned in nearly a third of the country.

At least 47 people between 2014 and 2019 have been killed in cow vigilantism-related hate crimes in India. The Hour of Lynching is a powerful short film that takes a deeply personal look at a grieving family and puts a face to the horrors of these lynchings by self-proclaimed “cow vigilantes.”

While Because We Are Girls is a Canadian documentary, it tells a powerful story of three Indo-Candian sisters that resonates all over the world. The film follows these women as they open up about the sexual abuse they experienced as children by a family member. In doing so, they hope to not only stop this violence but also send a powerful message to the next generation of women.

The documentary Pariah Dog follows several eccentric street dog caretakers as they look after the city of Kolkata’s stray street dogs. The film, which won Best Feature at the 2019 Big Sky Documentary Film Festival, paints a unique portrait of the city while bringing attention to its often neglected canine residents.

A 2014 Audience Choice award winning documentary at IFFLA, Faith Connections puts viewers at the heart of one of the largest pilgrimages on the planet: Kumbh Mela. Director Pan Nalin weaves together the diverse stories of just a few of the over 400 million pilgrims attending the 2013 event.

Tungrus and the Chicken From Hell (Rishi Chandra, 2018)

A family is terrorized by their pet rooster in this 2018 documentary short. Rishi Chandra’s New York Times Op-Doc Tungrus and the Chicken From Hell focuses on a family in crisis as they decide what to do about the unruly family pet.

Gangsters, Bollywood and terriorism: the 2008 documentary Shot in Bombay has no lack of excitement as it documents the production of the Bollywood film, Shootout At Lokhandwala. The action film faces challenges as the star actor, Sanjay Dutt, becomes a defendant in a high-profile criminal trial during filming for possession of weapons linked to bomb attacks in Mumbai.

Another “behind-the-scenes” documentary from 2008, Supermen of Malegaon strikes a much different tone as it follows a group of amateur filmmakers in Malegaon, India. These filmmakers find an escape from the economic hardships in their community through making quirky, low budget recreations of classic Bollywood films.

We close out this list with Ayurveda: The Art Of Being, a film that explores Ayurveda, a traditional South Asian system of medicine that combines both medical and spiritual health practices. The second Pan Nalin film on the list, the documentary tells the story of one of the oldest medical systems in the world.

Hansen Bursic is the Digital Communications Coordinator at IDA. He is also an independant documentary filmmaker and freelance writer with bylines in CinéSPEAK and QBurgh.