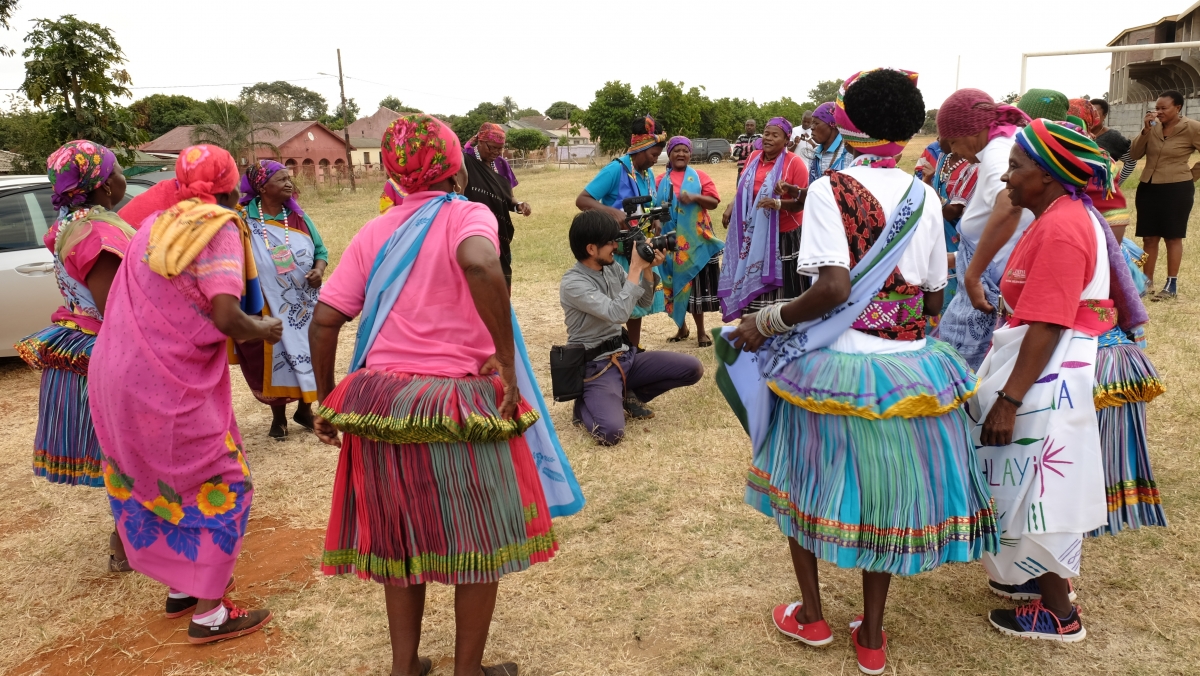 Once considered the red-headed step-child of the academic film world, documentary has become popular in academia, where experience with nonfiction filmmaking is providing students with a skill-set that is increasingly in demand by social and news-based media providers.

DOCUMENTARY:  Can you talk about the differences between the two campuses, New York and Los Angeles?

ANDREA SWIFT:  We started the Documentary Program 10 years ago in New York, where we are a conservatory campus that is focused on making films. The program was initially designed with that in mind.

SANORA BARTELS:  We're the same school, but the Documentary Program at the Burbank campus was set up by Karen Allen, the previous West Coast chair, with an MFA degree in mind. A lot of times students will attend the New York Program and decide they want to go deeper into their studies or get a degree, so they will enroll at NYFA, Burbank and their credits transfer over to the MFA Program.

AS:  Both campuses share the same hands-on philosophy, where our students learn by doing. The original idea was to create a film school program that could be completed in 11 months. I was a little skeptical, but I knew the president of the school, Michael Young, very well and knew him to be an ethical guy. He said, "I can't tell you why it works, but I promise it does. Try it for one year and see for yourself." So that was the goal. 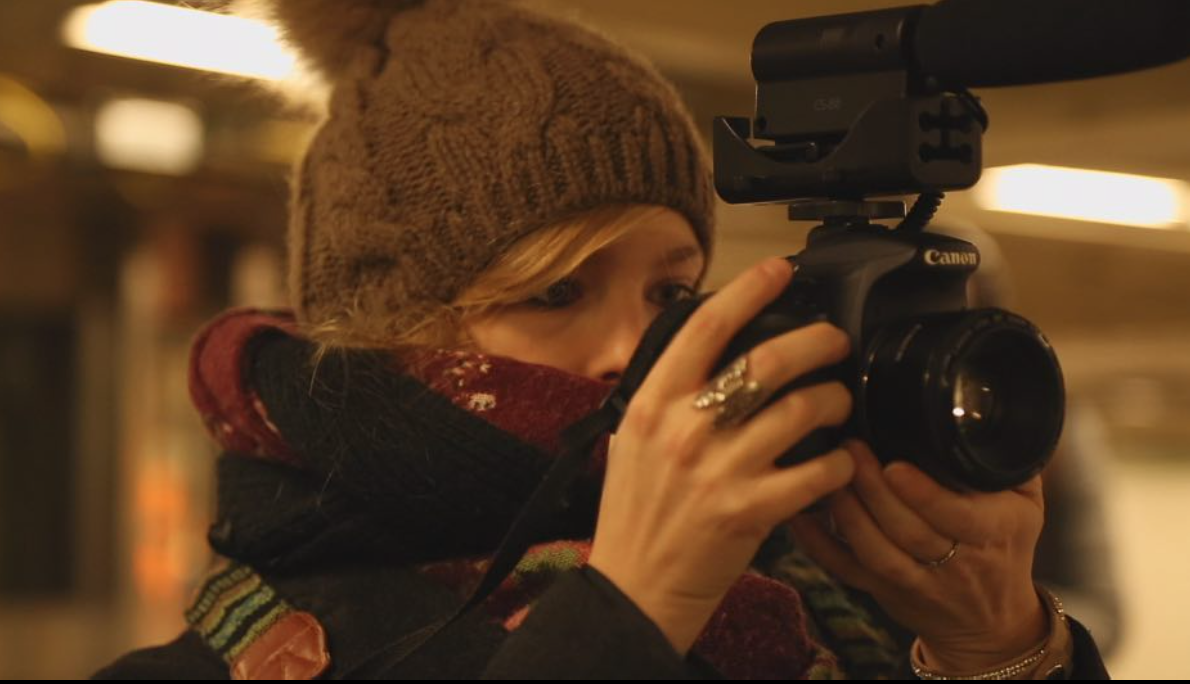 D: You mention that NYFA's philosophy is "learn by doing." Can you speak to that and how it may differ from a more traditional educational model?

SB:  That is part of NYFA's strength. Students at both campuses hit the ground running, and that first semester is a doozy. Right off the bat you have camera classes; you have directing classes; you have sound and producing classes—all of the practical instruction. Your first project is the mise-en-scéne—what's now called "film grammar"; it's designed to teach you how to set up a shot to see a story within a single frame. There are no cuts, and they shoot it on 16mm film. New York does that as well.

AS: It should hurt every time they pull the trigger. They're so used to shooting everything on their phones, this way they really feel it. It teaches them that you don't just go out and shoot everything; you come up with a plan. But that said, we're the jazz players of the film world. We have to be ready to play along with anything that comes our way as a story develops.

SB: One of the things this exercise shows you is that you need to carefully choose your shots and understand what's in your frame before you just start shooting something. With film, you really have to make intelligent choices because film costs money. All of these things lead to a more thoughtful filmmaker. We want them to know that every choice they make is an important one, especially when they're making short documentaries. They really have to understand the economy of what they're doing. Then they go on to shoot digitally, but if they choose to they can continue with film. 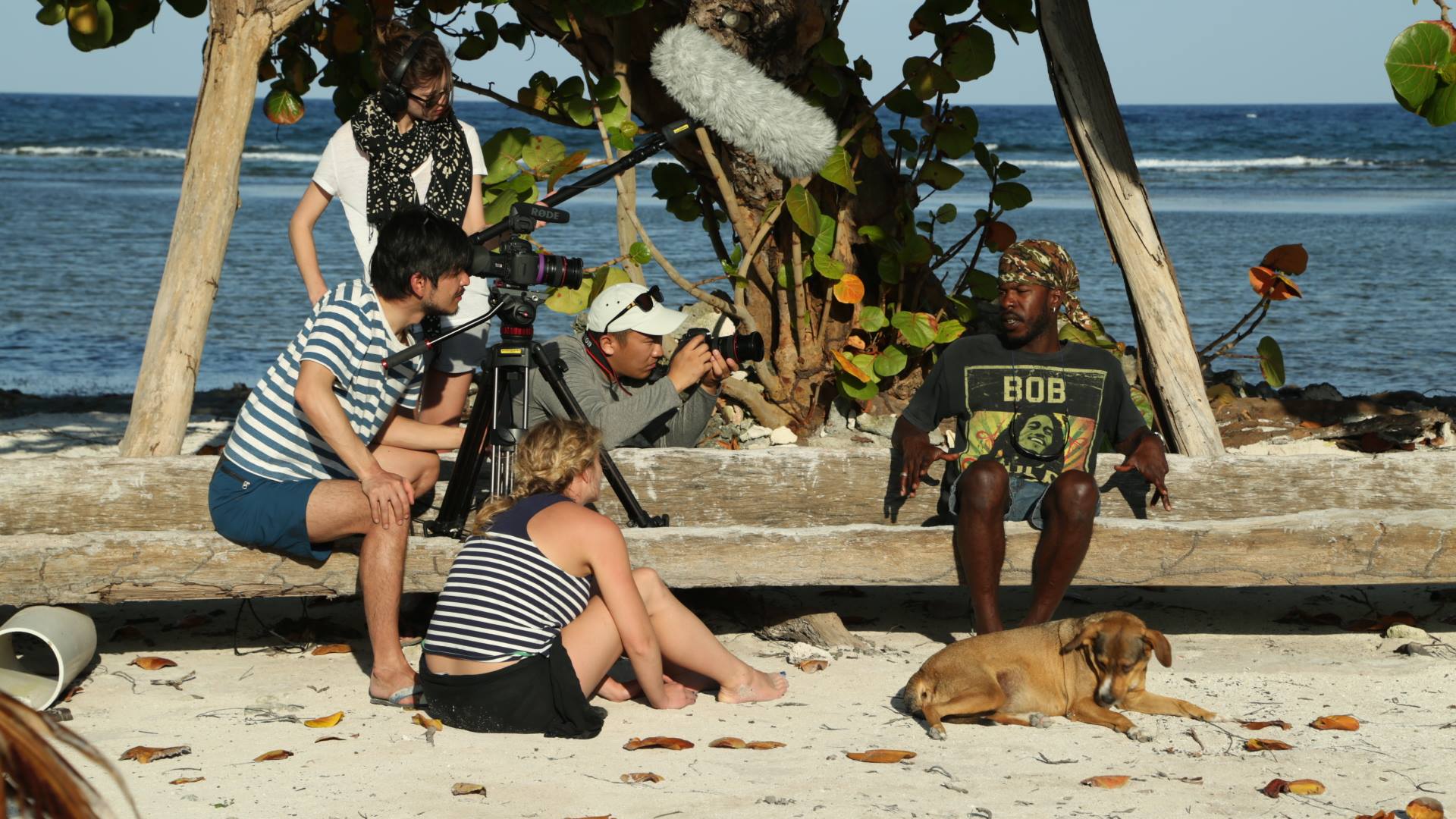 D: What would you say is the core of what you're trying to instill within the students as filmmakers?

AS:  We are very story-focused and, as mentioned earlier, our structure comes from the guiding principle that you learn how to make films by actually making films. The beating heart of that is telling a story. Even though we're oriented to vérité filmmaking in New York, we have a lot of writing classes. So we'll get verité people who come in and ask, "Why am I taking all these writing courses when I'm never going to write?" And the easiest way I found to communicate the answer is to point out the writing credits that the WGA [Writers Guild of America] controls—the "Story By" credit. That starts the conversation about what happens in those different processes, and why there are two different credits. All the work of storytelling, creating a narrative, gathering all the elements and deciding on the story—we have to do all that.

SB:  What's important in documentary is the same thing that's important in narrative: What's the story, morning glory? Who is your subject? I can't tell you how many times students have come to me and said, "I want to do a documentary about the homeless." And that is a great topic, but who is your subject? What's their story? They begin to think more deeply about those details in their second semester. Actually, the last thing they do in semester one is called the Character Film, where they need to go out and choose someone to build a portrait of this character. They have the option of using archival footage (if it applies), but we want them to develop their skills as an interviewer, so they're not just following somebody around with a camera; they actually have to engage them in conversation, to build their trust. That's part of the reason why they do the Personal Voice project before Character. If you do a Personal Voice film, you realize how hard it is to talk about yourself and any conflict within your own life. When you get to Character, you actually understand what it is you're asking of your subject. It's a nice little evolution.

D: What do you feel are documentary's, and, more specifically, NYFA's impact on the community, or the world at large?

AS:  We believe that filmmaking makes the world better in all kinds of ways. And one of those is to find interesting people from different places who find their voice and become part of the cultural conversation. At NYFA we believe the arts enhance people's lives, and visual storytelling especially has this whole other layer to doing just that. So the auteur aspect of filmmaking is very important to us, but we also want to nurture and support people who want to make a living and love this business and want to be in the industry. We have students who want to play with filmmaking as a way of thinking and to enjoy creating artwork, but we also have people who want to spend their lives doing this and they often come to school thinking they want to be directors. Once they get here, they start doing different things and realize they like shooting a lot better, or they really get excited about sound or producing, so they're able to prepare to go out and earn a living doing just that.

SB:  One of my favorite things about teaching at NYFA is the international body of students. If you do documentaries because you want to learn about the world, come to NYFA. You will learn about the world around you right here in the classroom, where you will figure out how to work with other cultures very quickly.

D:  Why might potential students choose NYFA as opposed to some of the other documentary programs that are out there?

SB:  Well, the CEO of the school, Jean Sherlock, just announced the other day that NYFA has been named as one of the Top 25 American Film Schools by The Hollywood Reporter. That's something we're very proud of. And here at NYFA the films that the students make are their own. NYFA doesn't own a piece of it. It's their intellectual property. But, getting back to the students, the MFA Documentary students, as part of their Community Project film, just pitched, produced and published Where Cultures Collide, as a Web series for independent channel KCETLink. 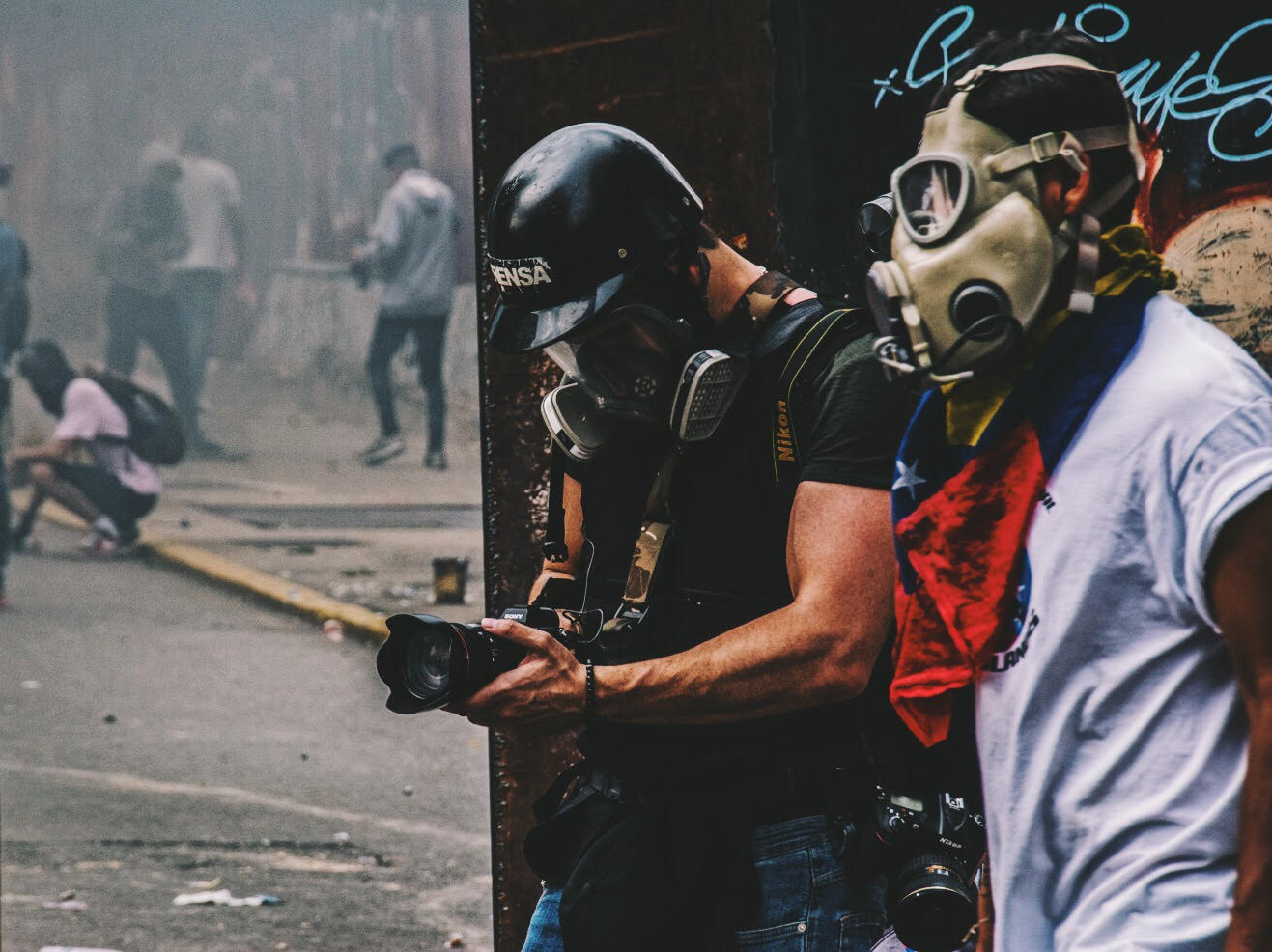 AS:  When the documentary program was just getting started at NYFA, we made Independent Magazine's list of Best Academic Programs for Documentary Filmmakers, which is thanks in large part to the faculty. When students have told me why they're coming to the school, the reasons vary. Some are attracted to the conservatory program because they like the idea of being up and running within a year. And a lot of them look at our graduates' track records. We have a very high percentage of people working and moving quickly up the ladder, and then there's the grads whose films are racking up nominations and awards. Raphaela Neihausen was the producer for Joe's Violin, a short documentary that was nominated for an Academy Award. And Muhammad Hamdy was the supervising director of photography and co-producer for The Square, which documented the recent Arab uprising, and was nominated for the feature-length Academy Award for documentary. He taught a bunch of people who were not filmmakers how to shoot a revolution [using the Canon EOS 60D and 5D cameras]. It was terrifying, and I was trying to talk him out of it the whole time. He kept promising, "No, no, I'm not in any danger at all," and then he'd show up on Facebook with a head-bandage because someone had shot a tear gas canister at him. And another time a 5D literally got shot out of his hands. It was definitely not my favorite thing to witness one of our graduates going through, but they all did an amazing thing, and he won the Emmy Award for Outstanding Cinematography in Nonfiction Programming.

And he's not alone. We have a list of festival winners, not to mention those who go on to work in TV. We have a bunch of grads—I call them the "Vice Squad"—that go to work at Vice and HBO, because in addition to their six films, we also have the students develop a TV series idea. Their deliverable is a written pitch that they verbally pitch to network executives like Evan Lerner over at A&E, or Adam Neuhaus, who was over at Radical Media at the time. The chances of anybody buying a student's series are negligible, which we're clear with them about, but it's that idea of learning what it is to make TV by designing something that works. It's one of the reasons I get the calls [for interns]: We have students who know what the agencies of TV are, and they're ready to step in and go.

SB:  Another reason students want to come here—and I'm speaking for the West Coast—is that they get to screen their thesis films over at Warner Bros. Studios. You are going to a screening room on the backlot and you're seeing your film the best it can be, as are your parents, your friends and the people who were in the documentary. That experience is lovely. Warner Bros. has been really generous with us.

D:  Is there anything else you'd like to mention as we bring these interviews to a close?

SB:  We're currently working on connecting students with nonprofit environmental groups who are looking for filmmakers, but that's still in the development stages, so I can't really get into particulars at this time.

AS:  The founder of this school, Jerry Sherlock, once told me that he thought the best thing he could give the world was documentary filmmakers. And the institution has continued to have that sort of real dedication to the field, which is a lovely place to be.

Tom Gianakopoulos is a writer and photographer who lives in Los Angeles. He is currently an adjunct instructor at NYFA's Burbank campus, where he teaches screenwriting in their HS Program