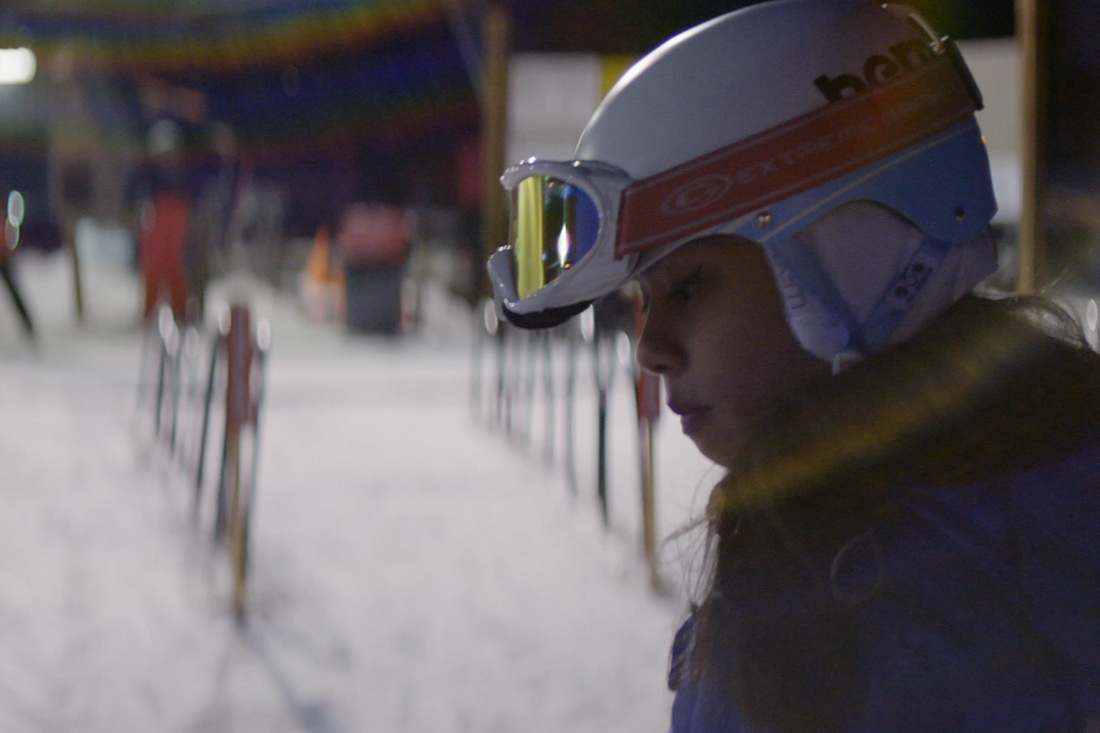 Michael Barnett’s Changing the Game, now streaming on Hulu, is a deep dive into the lives of three teenage athletes—Mack Beggs, Andraya Yearwood and Sarah Rose Huckman—each fighting to make their marks in their chosen sports—wrestling, track and skiing, respectively—while also having to fight for the right to compete on teams comprised of peers who share their gender identity. It’s a battle that would seem laughably nonsensical if it wasn’t so heartbreaking. This is perhaps best exemplified by the Kafkaesque vilification of Texas State Champion Beggs by the parents of female wrestlers, furious that his natural talent and uncompromising work ethic, enhanced by shots of testosterone, place him at an "unfair advantage" in girls wrestling. And Beggs probably couldn’t agree more—he’s been trying desperately to compete on the boys’ team for years. It’s only the big, overreaching government hand of the Lone Star State that’s stubbornly stood in his way.

Indeed, one of the more remarkable revelations in Changing the Game is how transphobia is less a grassroots left vs. right issue than a kids vs. adults problem. All three protagonists hail from loving families in both red and blue states (Beggs resides with Trump-supporting grandparents who are also fierce advocates for their grandson) and have a close-knit community of supportive friends, schoolmates and partners. Unlike in the bad old "don’t ask don’t tell" days before the legalization of gay marriage, the only bullying these teens seem to encounter is from the so-called adults outside the classroom (and of course on Fox News).

So to find out how exactly Gen Z is "changing the game"—and by extension queer rights—Documentary checked in with the politico of the film, New Hampshire’s Sarah Rose Huckman. Huckman bravely stood up to her own state’s bizarrely coercive policy that demanded trans athletes undergo gender-reassignment surgery (knowing fully well that such surgery is not even an option for kids) before playing on teams aligned with their gender identity. And she won. Which is why Documentary is especially pleased that this passionate skier, activist and policymaker agreed to add June Doc Star of the (Pride) Month to her impressive CV.

DOCUMENTARY: So how did you meet the filmmaking team—and what convinced you to participate in the project?

SARAH ROSE HUCKMAN: Clare Tucker, one of the film’s producers, reached out and pitched my mother and me. We discussed, and after thinking things through, we accepted. Clare then set up a time to meet with the film’s director, Michael Barnett.

Both my mother and I were very hesitant at first about me joining this film. Would participating in this documentary put a "target" on my back? What negative attention would I be opening myself and family up to? But what really pulled me in on being a part of the documentary was the thought of how my story as a transgender athlete will help other generations of transgender kids navigate the ups and downs of being trans in our society. Michael Barnett’s reason for wanting to make this documentary also put my mother and me at ease once we heard his personal story , where he was coming from and the intent behind the filmmaking.

Editors’ Note: In an interview in Salon, Barnett explained, "Someone in my life very near and dear to me began their transition. And I very, very quickly realized that I didn't have the knowledge and tools to advocate or be an ally in any meaningful way...And that's when I reached out to Alex Schmider, who's a producer on the film who works at GLAAD. He's the associate director of trans media representation…." Schmider advised him to build the right team. Barnett noted in the interview, "That perspective was really including people from the community to deeply inform the process, and the filmmaking and the storytelling.

D: As someone who’s quite active on social media, did having a camera follow you around feel familiar? Or was the experience quite different?

SRH: Having a big camera follow me around was actually very different from me using my own little camera to vlog YouTube videos. The camera that they used to film me was massive. I am still in awe at how they got the camera on the ski slopes without it breaking!

D: Your outspoken advocacy is truly impressive. So what motivates your activism and policy making? What set you on this path?

SRH: There are a lot of things that motivate me to continue my activism, but the main reason is the thought of generations behind me not being able to be themselves and experience full equality. I hope that the generations to come have an easier time being accepted for who they are. I will continue to fight for our rights all the way to the end!

Something that I always keep in the back of my mind is that I wouldn’t be doing the things I love if it wasn’t for my role models here in New Hampshire. People like State Representative Gerri Cannon and family friends Shana and Stephanie, who have all walked before me to clear a path in uncharted waters. They did that so my life could be a little easier, and I will do the same for those who are to come after me.

I would say it was a very unexpected path, but through joining the Legislative Youth Advisory Council, I ended up testifying for many transgender bills that would give New Hampshire citizens non-discrimination protections.

D: So what are your hopes for the film now that it’s reaching a national audience—and also for yourself?

SRH: My hopes for this film are that it will reach many people, touch their hearts and open their minds—making room for discussing transgender inclusion in sports. Transgender kids should be able to be themselves and play the sports they love.

I see sports as an example of full societal acceptance. The film was told through the lens of our stories in and through sports. It’s about how acceptance and full inclusion make for fuller, better lives. Through Changing the Game I really hope people will get to know us as trans athletes who are just people trying to do what we love without the fear of being attacked or discriminated against.

D: Did you learn anything by taking part in the doc? Did it change you in any way?