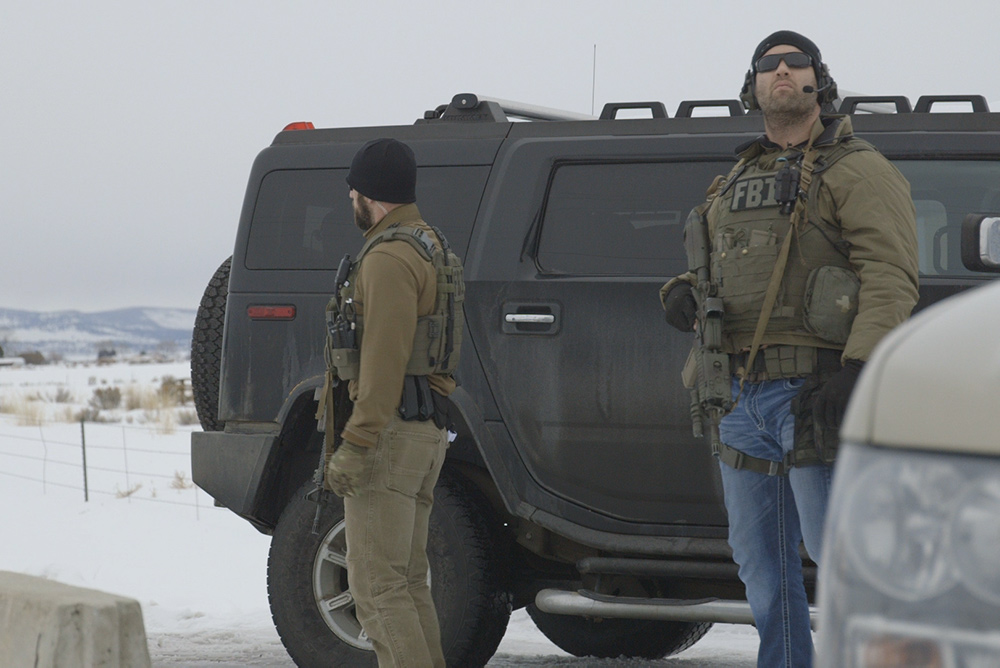 Documentary filmmaking, like other forms of investigative journalism, relies on sources and subjects who are willing to speak candidly and provide information—including in on- and off-camera interviews—sometimes at great risk to themselves. For that reason, especially for projects that tackle sensitive or dangerous subject matter, documentary filmmakers and other journalists often find themselves engaged in extensive, time-consuming efforts to build relationships of trust with their sources and subjects.

The Federal Bureau of Investigation (FBI) has a long (and troubling) history of co-opting this trusting relationship and misusing it to serve law enforcement purposes. For example, just a few years after his death in 2007, it came to light that Ernest Withers—a press photographer and perhaps the best-known visual chronicler of the civil rights movement—had, beginning in the early 1960s, spent nearly two decades as a paid FBI informant. Withers’ involvement with the Bureau, which was uncovered by journalist Marc Perrusquia, including through a series of federal Freedom of Information Act (FOIA) requests, came as a shock—not only to some who were close to Withers, but to many who simply never would have suspected that a journalist would serve as an investigative arm of the FBI.

But seeking to turn real journalists into informants is not the only way that law enforcement can attempt to take advantage of the trust often reposed in journalists. And no less insidious a practice is the FBI’s tactic of impersonating members of the media, including documentary filmmakers, in criminal investigations. In 2014, this tactic grabbed headlines when it was revealed that the Bureau had created a fake news article attributed to The Associated Press (AP) during a June 2007 investigation of a student suspected of sending bomb threats to his high school outside Seattle, Washington. An FBI agent pretending to be an AP editor engaged in online communications with the suspect, encouraging him to click on links to the fake news article and related photographs. When the suspect clicked the link to the photographs, he activated a computer program embedded within them that revealed his location to the FBI. According to a report later released by the FBI’s internal Office of Inspector General, the FBI agent, in the guise of an AP journalist, sought to earn the suspect’s trust by telling him, “I am not trying to find out your true identity. As a member of the press, I would rather not know who you are, as writers are not allowed to reveal their sources.”

The Seattle incident sparked outrage among members of the media and public, who pointedly explained that the FBI’s impersonation of journalists undermines the credibility—and the safety—of legitimate journalists. In a letter to then-Attorney General Eric Holder decrying the FBI’s actions, AP General Counsel Karen Kaiser called it “improper and inconsistent with a free press for government personnel to masquerade as The Associated Press or any other news organization.” Then-FBI Director James Comey, however, defended the practice, submitting a letter to the editor of The New York Times asserting that the FBI’s impersonation of an AP journalist in the Seattle investigation “was proper and appropriate[.]” Given Comey’s response, it is perhaps unsurprising that the Seattle incident is not the only known example of FBI agents impersonating members of the media in recent years.

Especially troubling to First Amendment advocates and documentarians alike is the threat of FBI agents impersonating documentary film crews, and with good reason. In 2017, it came to light through court proceedings that, as part of the FBI’s investigation into a 2014 armed standoff between the federal Bureau of Land Management and supporters of cattle rancher Cliven Bundy, FBI agents posed as a documentary film crew in order to gather information and conduct on-camera interviews of individuals present at the standoff.

These and other details of the FBI agents’ efforts to convincingly pose as documentary filmmakers, reported by journalists Ryan Devereaux and Trevor Aaronson for The Intercept, are startling. One of the FBI agents masquerading as a filmmaker reportedly assured one of the FBI’s targets, “This is not about getting people in trouble. This is about spreading your message.”

Through that ongoing litigation, the Reporter Committee has obtained documents that shed some light on the FBI’s use of media impersonation as an investigative technique. For example, in June 2016, the FBI put in place new internal guidelines for impersonating journalists and documentary filmmakers in undercover activities and operations. The guidelines obtained by the Reporters Committee through its FOIA litigation state that such activities must be approved by the FBI Deputy Director after consultation with the Deputy Attorney General, but do not provide any criteria for their approval. Because these guidelines were put in place after the 2007 Seattle incident and after the FBI’s 2014 “Longbow Productions” ruse, it is unclear whether those undercover operations would have been approved today under the new guidelines. Notably, in his 2016 letter to The New York Times about the Seattle incident, then-FBI Director Comey observed that even if it would “require higher level approvals than in 2007…use of such an unusual technique” today “would still be lawful and, in a rare case, appropriate.”

Other records produced by the FBI as a result of the Reporters Committee’s FOIA litigation indicate that, at the time the FBI’s new guidelines went into effect in 2016, the FBI was actively engaged in impersonating documentary filmmakers in connection with other criminal investigations. In released emails, FBI employees asked whether the agency’s new guidelines regarding impersonation of members of the news media “apply only to future [undercover operations], or apply retroactively to ongoing [undercover operations] that have already been approved with the documentary film crew scenario?” And another released email notes the existence of “a number of communications to HQ components and the field in 2016 regarding the use of ‘documentary’ and similar type scenarios in undercover operations.”

While these documents certainly suggest that the FBI’s “Longbow Productions” operation in 2014 is not the only time that FBI agents have impersonated documentary filmmakers in connection with a criminal investigation, just how frequently the FBI utilizes this tactic is unknown. And the FBI has fought to keep that information secret. In one lawsuit filed by the Reporters Committee, the FBI asserted what is known as a “Glomar” response to a portion of a FOIA request, refusing to confirm or deny the existence of records related to other instances in which it has impersonated documentary filmmakers during the course of an investigation. In defending that position, the FBI argued to the federal district court in Washington, DC that publicly disclosing how frequently FBI agents impersonate documentary filmmakers “would allow criminals to judge whether they should completely avoid any contacts with documentary film crews, rendering the investigative technique ineffective.”

In a win for the Reporters Committee, the district court determined that the FBI’s “Glomar” response was improper. But, as the Reporters Committee argued in court, the FBI’s ongoing efforts to stymie transparency has broader implications for the exercise of First Amendment rights. Indeed, the FBI’s own legal arguments highlight precisely why public disclosure of more information about the FBI’s practice of impersonating documentarians and other journalists is needed. The specter of FBI agents pretending to be documentary filmmakers has a chilling effect on speech to real documentary filmmakers, hampering their ability to gather information and tell important stories. As the FBI itself acknowledged, sources and subjects will undoubtedly be less willing to speak candidly to documentary filmmakers, both on- and off-camera, if they think those filmmakers are secretly working for the government.

Indeed, two documentary filmmakers, David Byars and Abby Ellis, both of whom worked on projects documenting members of Cliven Bundy’s family and their supporters, submitted statements in one of the Reporters Committee’s FOIA lawsuits, telling the district court how the FBI’s “Longbow Productions” impersonation effort affected them and their work. Byars—whose 2017 film No Man’s Land documents the 41-day occupation of Oregon’s Malheur National Wildlife Refuge in 2016 by a group of armed protestors led by Ammon Bundy, Cliven Bundy’s son—told the district court that had the subjects of his film “known at the time of the occupation of the Malheur National Wildlife Refuge that the FBI impersonated documentary filmmakers to elicit statements from suspects connected to the 2014 Bundy standoff, I am certain that I would not have been given the same access to them that I was given to make No Man’s Land. Put simply, had my subjects known then what they now know about the FBI’s ‘Longbow Productions’ documentary film front, I don’t know if No Man’s Land would have been made; it certainly would have been a different film.” Similarly, Ellis, who worked on the documentary film American Patriot: Inside the Armed Uprising Against the Federal Government for FRONTLINE, reported that

while working on the film certain individuals believed her to be an undercover FBI agent, and refused to speak to her.

FBI impersonation of documentary filmmakers can pose safety risks as well. Independent documentary filmmakers often work alone, or on small teams, meeting interview subjects in remote or unfamiliar locations. Given the environments in which many documentarians work, as Ellis explained to the district court, a subject’s false belief that a filmmaker is an undercover FBI agent could put that filmmaker in danger.

Much remains unknown about the FBI’s practice of impersonating documentary film crews in connection with criminal investigations. But what is clear is that the practice causes real, concrete harm to legitimate, independent documentary filmmakers. If sources and subjects cannot be certain they are speaking with a real documentary filmmaker—and not an undercover FBI agent—they are less likely to speak openly and on-camera, and far more likely to refuse to speak at all.

Katie Townsend is Legal Director, Reporters Committee for Freedom of the Press.

END_OF_DOCUMENT_TOKEN_TO_BE_REPLACED

'MLK/FBI' Explores the Complexities of the Civil Rights Icon