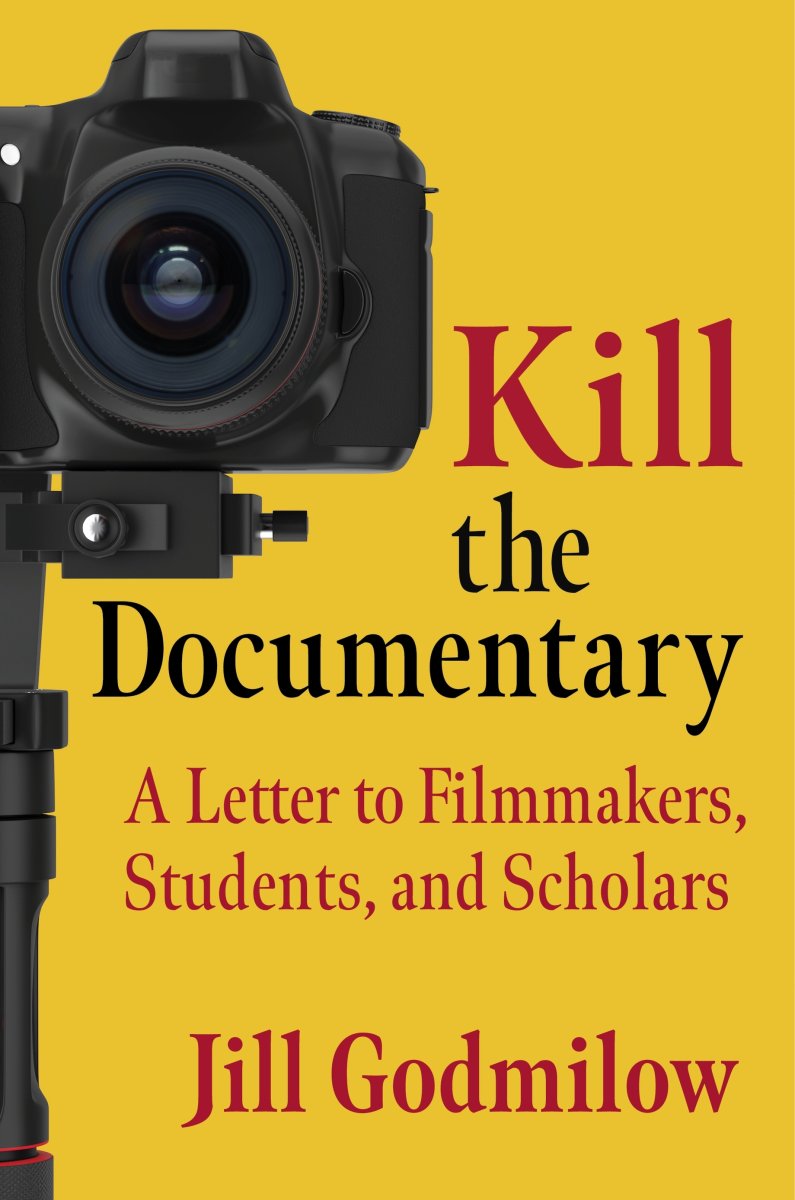 Kill the Documentary is a brilliant, angry book. An honest book. A brave book. Guggenheim Fellow and award-winning filmmaker Jill Godmilow has written a stirring call to arms in a form she calls “a letter.” I rather agree with Bill Nichols, who writes in the foreword that he prefers to call it “a manifesto.”

Born near Philadelphia, this 79-year-old Emeritus Professor from the University of Notre Dame has scores to settle with the traditional documentary-as-we-know-it, or as she prefers, “the DAWKI, which is fun to say and only five letters.” Her wry sense of humor helps to soften the blows she inflicts. She is not shy in her trashing of Ken Burns, the can-do-no-wrong cash-cow producer of public television history classics like the 18-hour The Vietnam War (2017), which Godmilow uses “as a prime example of what not to do.” She continues, “The Vietnam War fabricates an inauthentic memory of that war that endangers any memory we might have of it, individually or collectively.”

She also has a lot to say, mostly not good, about the much-lauded 1994 documentary Hoop Dreams, by Steve James and Kartemquin Films. In general, she warns against “the lure of the narrative,” that films like Hoop Dreams offer the audience an opportunity for personal exoneration. This style of filmmaking rewards us with tacit forgiveness for our past and current racism and economic oppression. It provides us the opportunity to feel empathy for the characters struggling against their demons while permitting us to self-righteously reflect, “After all, we viewers didn’t create the hood. We didn’t personally deliver the crack cocaine that led the boys’ fathers into addiction…”

As a counterpoint, she declares that her job, as well as the job of all filmmakers, “is to make viewers see something they’ve never seen before…to understand something anew.” To this end she frequently comes back to Harun Farocki’s 22-minute post-realist film Inextinguishable Fire, about Dow Chemical’s development and production of napalm-B. This incendiary bomb and “agent of terror” was dropped on Vietnamese villages to destroy everything it landed on: crops, animals and humans. It was literally inextinguishable. It can’t be snuffed out, smothered or washed off. Dropped on humans and animals, napalm burns through flesh down to the bone. Farocki does not show us the iconic young Vietnamese girl running naked down a dirt road with her skin being burned off her body. He “short-circuits empathy and emotional catharsis and compels objective, accurate observation of mundane routine [corporate] evil.” It seems to me there is a corollary here with the thinking of political philosopher Hannah Arendt, who coined the term “the banality of evil.”

Godmilow claims that conventional docs, like Hoop Dreams, “hand you an answer key with your quiz. They tell you whom to hate, love or mourn.” She sees Farocki asking much more from his audience, forcing them to work, think and reflect on how society can be so broken as to create such evil, a society where we are all complicit as individuals who participate in an economic and social system that labors to scorch the earth and all living things on it. Farocki is a visual poet and brings a state of awareness about how war is produced in a capitalist economy “without finger-pointing, without anger, and most important, without the ‘pornography of the real’. ”

Godmilow was so taken by Farocki’s film that she made an exact replica (with the filmmaker’s permission) in English (it was first released in Germany) and in color, long after the original film was released and decades after the end of the Vietnam War. She digs long and deep into the analysis of the film’s style and Farocki’s methodology. To answer her frequent questioners as to why she would do such a radical thing as replicating someone else’s film (Godmilow’s version is called What Farocki Taught), she provides this list:

The writings of the Nobel Prize-winning South African author J.M. Coetzee have also provided the author with inspiration. She quotes a paragraph from his 1986 article “Into the Dark Chamber: The Writer and the South African State,” where he speaks about South African novelists being “drawn to the torture room” in search of “novelistic fantasy.” And he goes on to say, “The true challenge is how not to play the game by the rules of the state, how to establish one’s own authority, how to imagine torture and death on one’s own terms.” Godmilow believes this is what post-realist nonfiction film can do and what Farocki has accomplished in Inextinguishable Fire: “to imagine torture and death on one’s own terms.”

The purpose of the book is ultimately to show filmmakers how to make a useful film and that to “do this kind of work you must sing a gutsy, plucky, audacious, intrepid song, one that documentaries on public television never sing.” I don’t mean to over-emphasize Godmilow’s most provocative remarks. The book is not one long harangue against the powers that be. The last two-thirds of this “manifesto” provides a map in the form of “Forty Postrealist Strategies to Learn from and Borrow,” followed by an indispensable “Toolkit,” which I suggest every educator charged with teaching the documentary form might use to structure their classes. She’s a great fan of poetry. One of her tools is an item called “Teach Yourself Poetry,” where she encourages you to see the genre as a “tool to lose your mind and help you to think creatively about what’s possible in the nonfiction film you may be contemplating.”

While some of the lessons are sprinkled throughout the text, the final chapter of “Toolkit” opens with “Questionnaire: For Doing a Close Reading of a Documentary Film.” When she was teaching, Godmilow required all her documentary film students to apply this questionnaire to five of the more than 15 films they would watch in class during a semester. There were 20 questions on the list and if students applied themselves, they would have produced their own analysis of the film. They were instructed not to answer any questions that “do not lead you to insight.” Students were expected to be able to defend their answers.

Part of the toolkit acknowledges “The Unspoken Pleasures of the Documentary-As-We-Know-It.” She forgives us, sort of, for being suckered into believing what we see, pointing out that while “photographs don’t lie, liars may photograph.” Everything Godmilow espouses comes from a desire to be useful. She becomes vulnerable in the process, admitting that “Trying to be useful has kept me on course.” I can assure her Kill the Documentary is one of the most useful books on understanding my own reaction to documentary films that I have ever read. The section near the end of the “Toolkit,”: “144 Feature Films You Should See Before You Croak,” set out a task for me that I hope I can accomplish, and the final Filmography of all the films discussed in the text is also useful in tracking down distribution copies for classroom use.

END_OF_DOCUMENT_TOKEN_TO_BE_REPLACED

The School of Doc: The World's Premier Documentary Scholar Reflects and Revises