Have Camera, Will Collaborate: Cinematographers Focus on Telling the Story 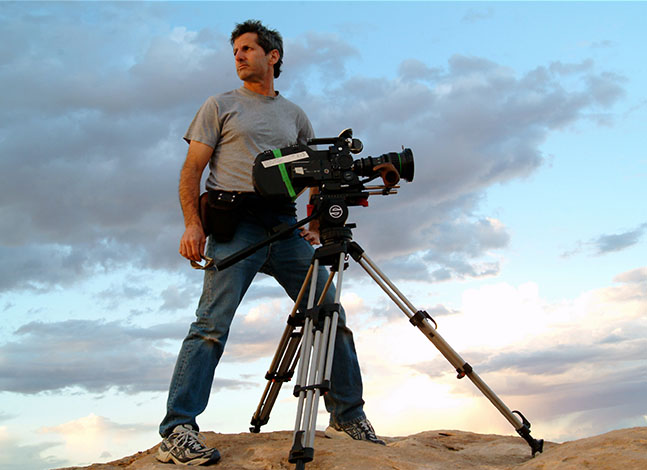 Cinematographers Joan Churchill, ASC (Aileen: Life and Death of a Serial Killer), Kirsten Johnson (CitizenFour) and Buddy Squires, ASC (The Central Park Five), share a collective set of core goals and values for filmmaking. Their job is to serve the director’s vision by getting at the center of the story the director wants to tell. They do this by establishing an empathetic, trusting relationship with the subject. Making technical choices on style, size or type of camera, camera lens and lighting based on the story are only part of the job. Churchill, Johnson and Squires approach these aspects differently in some cases, but remain constant in others. Their overall objective is always in the best interest of telling the story. The conversations between the cinematographer and director exploring the style of the interview are only the beginning. Johnson is interested in deep themes. “I’ll have people come up with a list of huge number of things that they’re thinking about in relation to the film with an interview,” she explains. “A lot of times, there’s a real question around whether the space the person is being interviewed in corresponds to those themes in any kind of way—whether it’s an indigenous space for the person or whether they’re in a place that has no particular meaning to them, like a hotel room or something like that.”

Squires and filmmaker Ken Burns (The Roosevelts, The Civil War) were roommates in college and later formed, along with filmmakers Lawrence Hott and Roger Sherman, the production company Florentine Films. Squires and Burns have worked together on many films over the past three decades. “We don’t really talk at all because we’ve been doing similar work together for a long time, so we just go back and do what we do,” Squires explains. When Squires works with a director for the first time, though, “We discuss stylistically, What kind of interviews are we going for? Are you going for interviews in which the environment in some way informs the interview? Is it a place that is directly connected to the interview subjects, in which case some sense of feeling of that environment becomes an important element of the story? Or is it somebody talking about things that have nothing to do with where they physically are?”

When Churchill worked with Barbara Kopple on the Dixie Chicks documentary Shut Up & Sing, the only direction Kopple gave was, “Just do your thing.” Kopple understood that Churchill’s “thing” wasn’t a sit-down interview. She doesn’t carry a tripod or use lighting for her own films, though she will use a conventional sit-down style and light interviews when hired by a director. For Rory Kennedy’s Last Days in Vietnam, Churchill says, “The situation was appropriate for a historic film where there isn’t any way of getting that information except by talking to people. It’s a very valid kind of filmmaking, but it’s not the kind of filmmaking I love to do. I’m a shooter; I’m much more interested in people and somehow re-creating their reality for an audience.”

Lighting is a critical component to the style in the storytelling process. There are several sets of variables to consider when lighting the subject for the interview. The circumstances are constantly being modified according to the situation. “I tend to prefer a fairly high-key lighting style, but that’s not a given,” Squires says. “It really depends upon what’s the story we’re telling, who the person is we’re interviewing, what’s going to make that person feel comfortable, and what’s going to allow his or her story to come through the best. The bottom line is always to find how to best serve the story that you’re telling. Obviously, there is also the degree of control that you have over the situation and how much time you have.”

Johnson’s favorite lighting story happened during production on Kirby Dick and Amy Zeiring’s Derrida, about the French philosopher Jacques Derrida. “Derrida said to me, ‘I just have one thing to ask you: I want you to film me completely in profile.’” After setting up, Derrida came down for the interview, and, according to Johnson, “Derrida looked at me and said, ‘You’ve done exactly what I told you not to do.’ And I said, ‘I set you up in full profile.’ And he said, ‘I meant the left side, not the right side.’” Johnson continues, “You have an obligation both to the person you’re filming and the director to be as respectful to everybody involved as possible, so that you’re trying to help a person be seen with dignity and hopefully beauty and in a way that allows for them to be really comfortable with talking.”

Churchill has a kind of filmmaking style she calls “on the fly.” Her approach on her own films is to not use lighting at all, to better serve the story. She has co-directed several films with ex-husband Nick Broomfield (Tales of the Grim Sleeper). They begin shooting the minute they enter the door. Churchill recalls an occasion on the film Biggie and Tupac, about the late rappers Biggie Smalls and Tupac Shakur. When setting up for a scene at Biggie’s mother’s house, “There was a shrine in the living room dedicated to Biggie, and his best friend walks over to pay respect. I was getting ready for the interview. I didn’t even know what was happening; I was oblivious and I missed it completely. Nick was just furious with me. So that was the last time I ever used lights for one of my own films.”

There are the technical nuts and bolts of the interview, such as camera choices, using a handheld camera versus a tripod, or using a prime lens or a zoom lens. That all depends on the style of the film being made. Churchill prefers the small camera because she doesn’t feel hidden from the subjects, and thus can relate to them better, “because they could see your face. Then they could see your reactions and your emotions. It becomes this very interactive kind of style of filming, which I just think is incredible.” She further explains, “I have to win their trust and I have to gain access—it’s something you have to work at everyday.” Churchill has been using the Sony HXR-NX30U camera, then moved on to the Sony PXW-X70, which has a larger chip so she can get a narrow depth of focus and can shoot in 4K. The lenses she used for Last Days in Vietnam were Canon C-300, Canon 24-105 mm F4L and Canon EF 70-200 mm F/2.8 (L IS II USM).

After shooting for years on film, Squires says, “I’m shooting primarily these days with an Amira, which is a fantastic camera and it’s pretty much what I use for 90 percent of my work at this point.” He describes his previous cameras as a “Frankenstein collection,” in which he pieced together lenses, sensors and viewfinders to build a camera system. “What I love about the Amira is that it was designed as a camera system from the beginning that goes very quickly from being a great handheld tool,” he explains. “I do a lot of handheld work and really love the ability to do that. Being able to go into a tripod or a dolly or a crane or whatever you’re using has a tremendously wonderful image quality. Being able to bring that level of quality into my level of image-quality, into a hand-held camera system, is pretty great.”

Johnson, who is also a director, has worked on over 50 feature-length films with various directors, including Laura Poitras. She works on five to 10 films a year. Regarding a favorite camera to shoot, she says, “I’ve just recently fallen for the Sony FS7 because I love the quality of the 4K image and I love the physical body of the camera. It’s really easy for me to cradle it, put it on my shoulder, hold it above my head or hang it low.” The accessory that makes her job easier is the CineSaddle. This a unique camera support product that is a bag filled with lightweight Styrofoam beads. “I found it incredibly useful to me while I was pregnant with twins,” she says. “You can just set the camera in it and it takes some of the weight of the camera. You can have the camera be completely steady. You can walk with it, you can store lenses inside of it and then you can use it as a sandbag and set it on anything and create a tripod anywhere. I really love having this as an accessory, particularly when I’m in really remote conditions.”

When it comes down to new technology, while it has been a game-changer for the cinematographers we spoke to here, it’s also been a matter of learning-curve adaptability and the degree to which new gear enhances their storytelling craft. “It’s definitely both challenging and thrilling because you have to attempt to keep up to the extent that you can with understanding what the gear is capable of doing for you,” Johnson admits. “In the course of my lifetime as a cameraperson, it’s become so much easier to work with the batteries, the cards and the digitizing. All of those things keep changing in ways that have helped do work.” However, she continues, “I’m just laughing thinking to myself, ‘I’ll be up all night digitizing 4K cards, because I had no media manager.’ Sometimes I haven’t figured out what the technology is going to demand and I end up paying the price for trying to figure out it out in the field, or the time that it takes to work with it.”

Churchill’s focus is not on technology. “I’m just not interested in technology except in how it can make me a more real person to people,” she says. In describing her filmmaking style, she quotes the British filmmaker Karel Reisz: “Cinema vérité is wanting what you get, not getting what you want.”

Tracie Lewis is a mass media instructor, a contributing editor at Documentary magazine and a producer.

END_OF_DOCUMENT_TOKEN_TO_BE_REPLACED

Be Careful What You Wish For: Doc on Natural Disasters Finds Its Drama in Sumatra

Deep-Dive Docs: Cameron's and MacGillivray's New Underwater Films Go Where No Camera Has Gone Before